I know that everyone here is drooling for pictures.  You don’t care what I have to say UNTIL YOU GET A PICTURE. Fine. Here’s a picture.

I’ll help you out. The pair of ears that is to be mine is on the far left.

Her name is TKR Merry Go Far and I’ll admit, her name was probably what pushed me over the edge to taking her seriously.  Her mom is TKR Merry Go Fastr and there’s another horse in the same line that is “Merry Go Fast”.  (If I breed can I name the baby Merry Go ‘Round? hahahaahaaha I crack myself up.  I don’t breed, but I just couldn’t resist).

Now that I’ve gotten the first picture out of the way will you let me tell the story? And if you are the ADHD type that needs a distraction until the next picture you can be thinking of an everyday moniker for the ‘lil tyke. “Gopher” is out – we had a cat with that name.  “Go Far” is an obvious one.  But you’all know my rule about naming horses within the black stallion series……

After tracking down Farley’s breeder a couple of years ago (we will call her K*) we have kept in touch periodically over email.  I’ve come to really appreciate the TKR breeding and a couple of years ago I told her I would be interested in another young horse from her program at some point. I also know that K* would be interested in a breed lease on Farley.

So, it wasn’t unusual to have an email from K* checking in to see how Farley was doing and to let me know that a TKR horse was available and if I wasn’t interested, if I could pass the information along.

As I read through the email I realized I might be looking at “the one”.

She was the right age – 2 years old this up coming February.  Raised on hilly pasture most of her life.

The words in the ad all said the right thing: friendly, easy going, sweet, lots of substance.  There was a scary word….TALL. But at this early stage TALL isn’t enough for me to run screaming in the other direction. But, I consider it a little strike against the “ideal” horse in my mind.

Next up was breeding.  She’s a half sister to Farley, out of the same sire.

I’m told that Farley takes after her sire’s temperament and I feel like it’s a very solid performance line that can do a lot of different things (driving, racing, endurance, halter).  I have a post coming up on Epigenetics…but the short story is I believe it absolutely matters in horse breeding. So, it matters to me that he actually did something as a career (Calbred Reserve Champion of the Year), not just that he comes from a long line of horses that did something. Knowing that Finito-Finisz (Farley’s sire) died last year (2013) at 21 years of age, meant that time was running out to get another one of his filly’s. 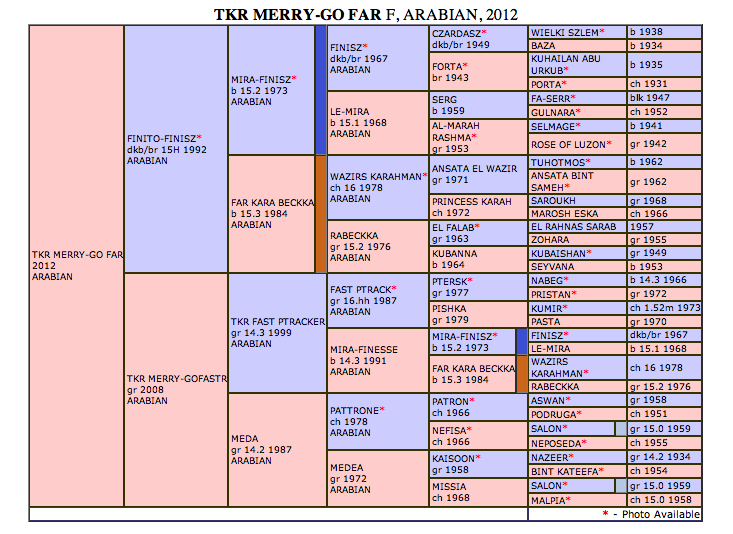 For comparison, here is Farley 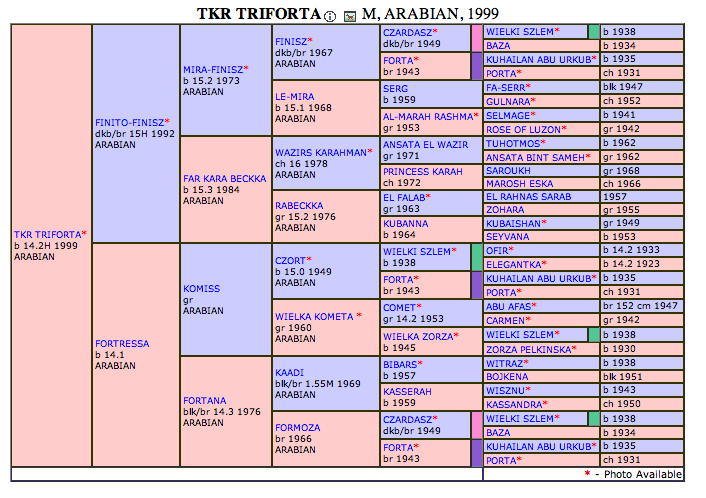 Farley is completely polish, Merry Go Far is mostly polish as well, except for Fast PTracker who is her great grandfather on her Mother’s side who could be considered Russian.  There’s a Darby winner on the Dam’s side, and some other notables. So far so good!

But there’s a small strike here too….color. There’s a really good chance that Merry Go Far is a grey. Her baby pics (2 weeks) look like this: 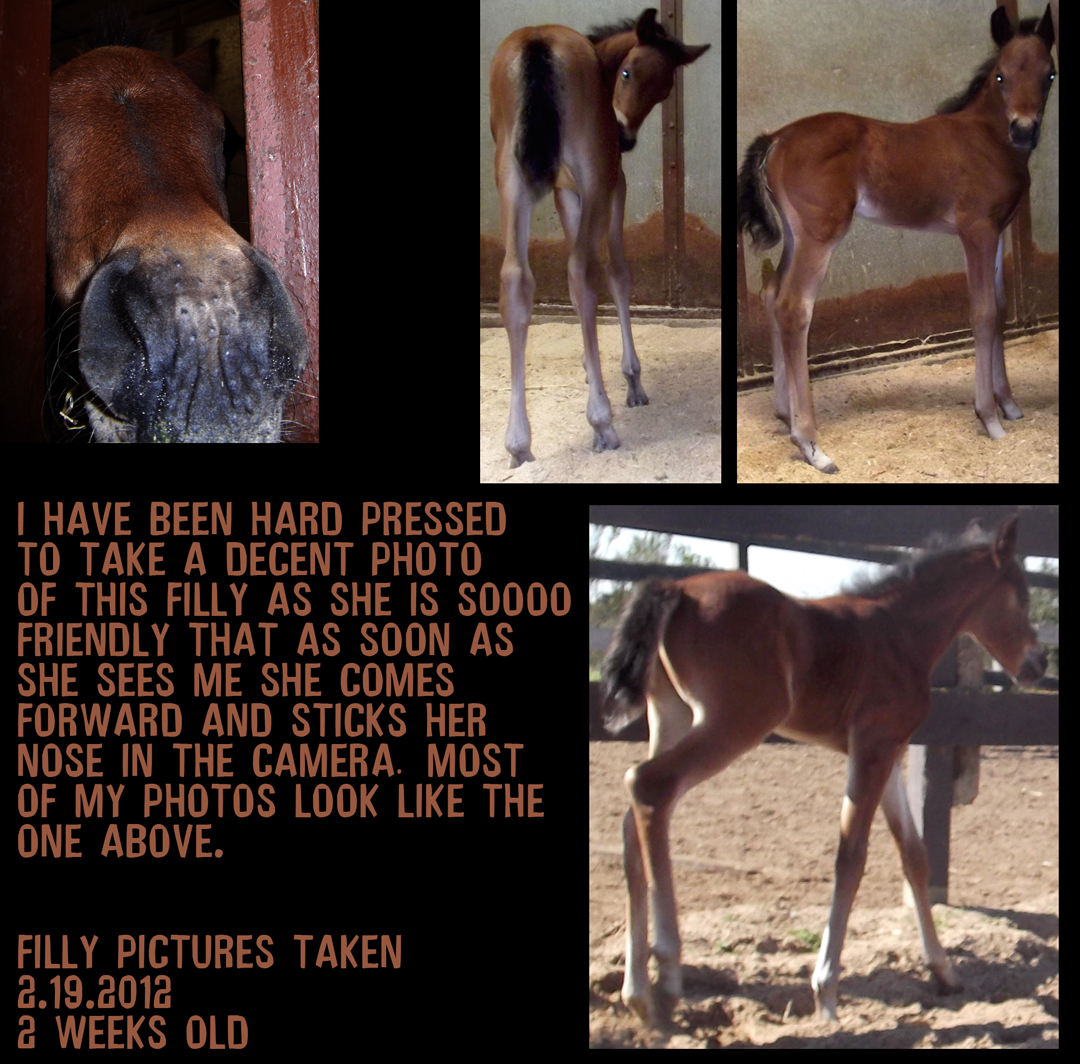 There’s a LOT of grey on that Russian side. A lot of greys mated to greys.  Farley was bred to this line and had a grey son. As I counted out the potential grey genes, I realized there was the smallest chance that Merry Go Far could end up bay.

But a much more substantial chance she was grey by now. (I’m not a fan of grey).

Are you ready for the 3 year old part?

Turns out that part of the deal to get this filly involves an exchange.

3 months of riding another TKR horse named Tig 3x a week to leg her up for the track this summer.

I did some quick calculations. Three months takes me to the beginning of clinics. There’s a couple benefits to this arrangement beyond just financial.

1. I get to ride a baby for 3 months and prep myself for where Merry Go Far is going to be next year. I’ve ridden babies in the past, but it’s been a while. It would be nice to have a refresher without the emotional investment of it being “mine”.

2. I won’t have any intensive riding obligations during clinics – Tig will be back to K*, and Merry Go Far will be mostly ground handling.

So here’s the plan.
First off you are going to see Tig here on the blog.  I pick her up Monday from the person that’s been riding her for K* up to this point.  Tig is apparently NOT described as “sweet” and “easy going” so putting 3 months on this 3-going-on-4-year old before she goes to the track later this year could be “interesting” but at the very least educational and will make for good blogging.
Then, hopefully in 3 months time, we will welcome the addition of TKR Merry Go Far! Merry Go Far will be 2 this February. She will be 3 1/2 when I get out of clinics.  I envision mostly ground handling, lead line runs, and ponying for at least the next year and if life gets crazy the year after clinics (I’m learning that big life changes take about a year to adjust too) we will just continue that pattern. I have a couple of local trainers I like and trust that I could send off for ground handling if I felt like she needed beyond what I could give her in the next year, and when the time is right they can put the first rides on (or more….). 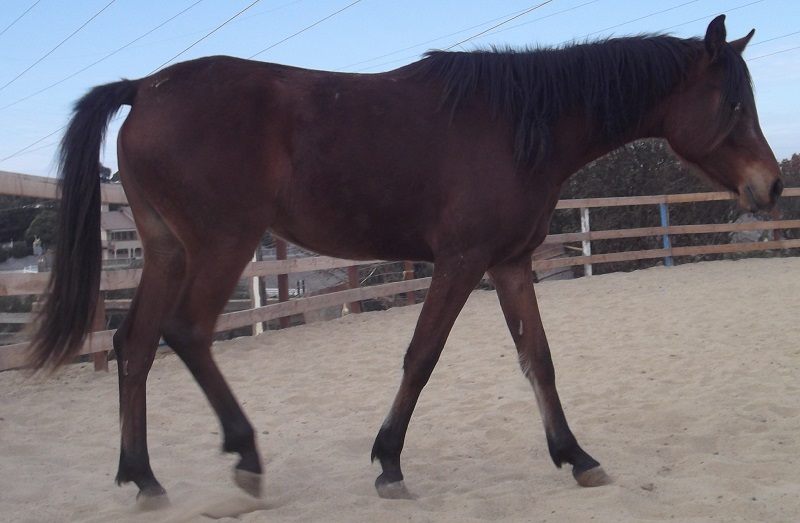 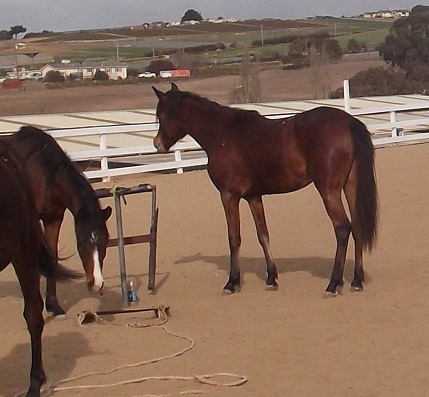 Do you see what I see?

Yes, I see a bay horse.  A bay horse that just *might* stay bay.  K* says there’s no guarantees  at this point, but usually if they look like this now, they do stay bay.  YES.

Off to practice those pistol squats and brush up on my tall horse mounting skills…..