I have a number of half started, barely edited drafts right now….and instead of making any of those coherent (which seems like a lot of work as I sit here in my recliner in the living room), I’m going to write about whatever random thing pops into my head.

Did I mention I found the on call room in the vet hospital?

I can sleep here on the nights that I’m on call instead of cramming myself in my corolla or huddling in the locker room which is characterized by a dirth of plugs to charge electronics and no cell reception (problematic for keeping the phone charged and ready for an incoming call….).

I had heard rumor of this room….but hadn’t found the courage to go up to the small animal part of the hospital and poke around. Finally, behind a door labeled “Resident Assist” and “designated lactation site” I found it!!!! 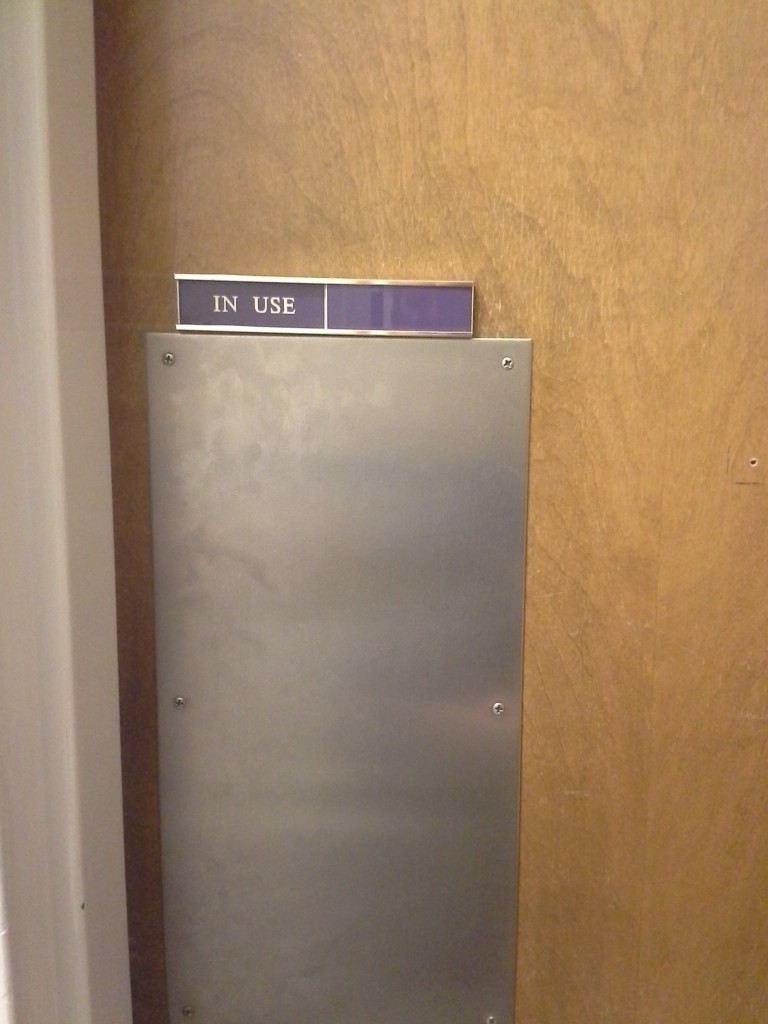 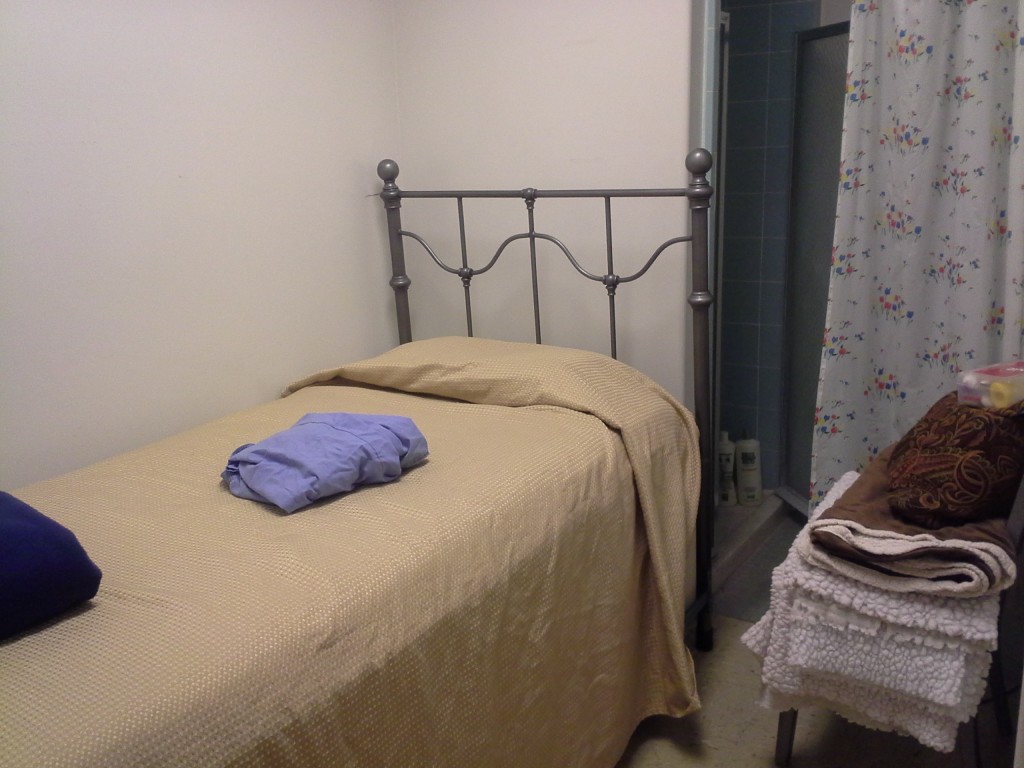 The first bedroom I went into… 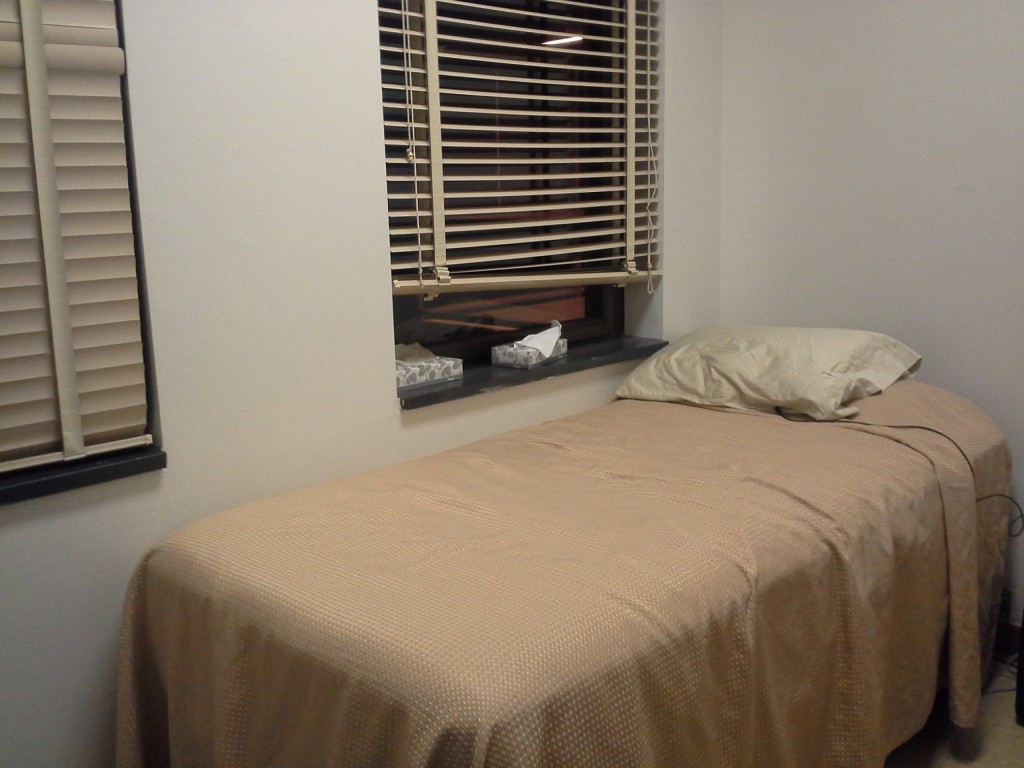 …but quickly chose the second bigger one because it had WINDOWS. Trade off was the creepy looking lacation machine in the corner.

I’ve whined about it enough I thought I would share picture. 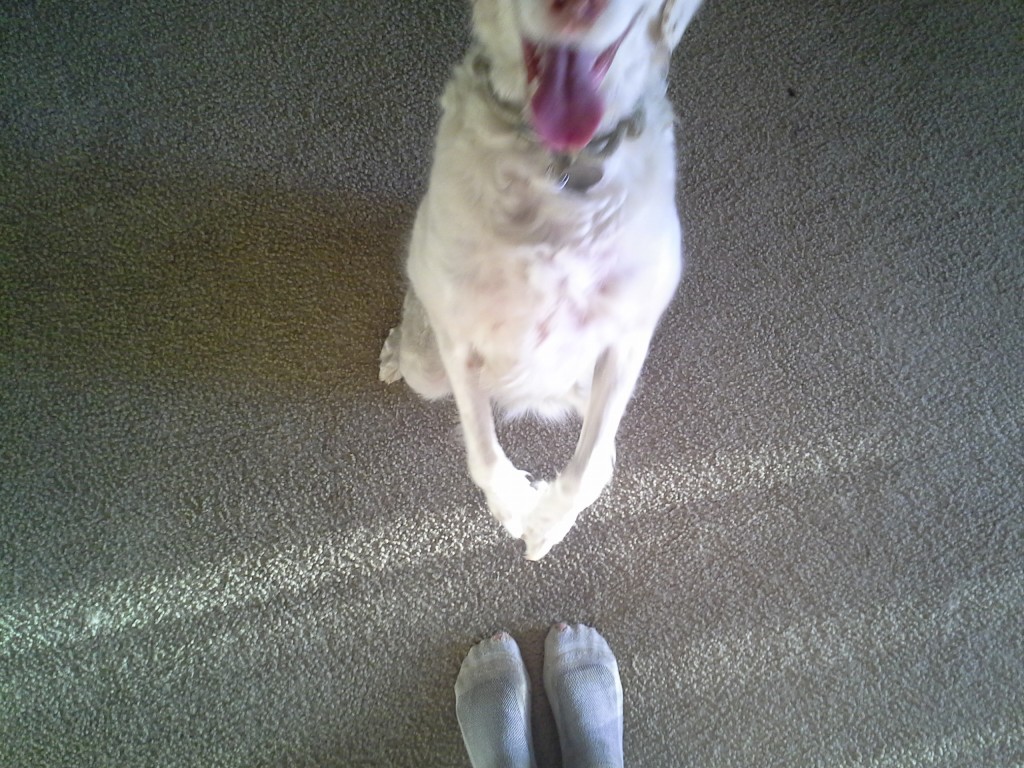 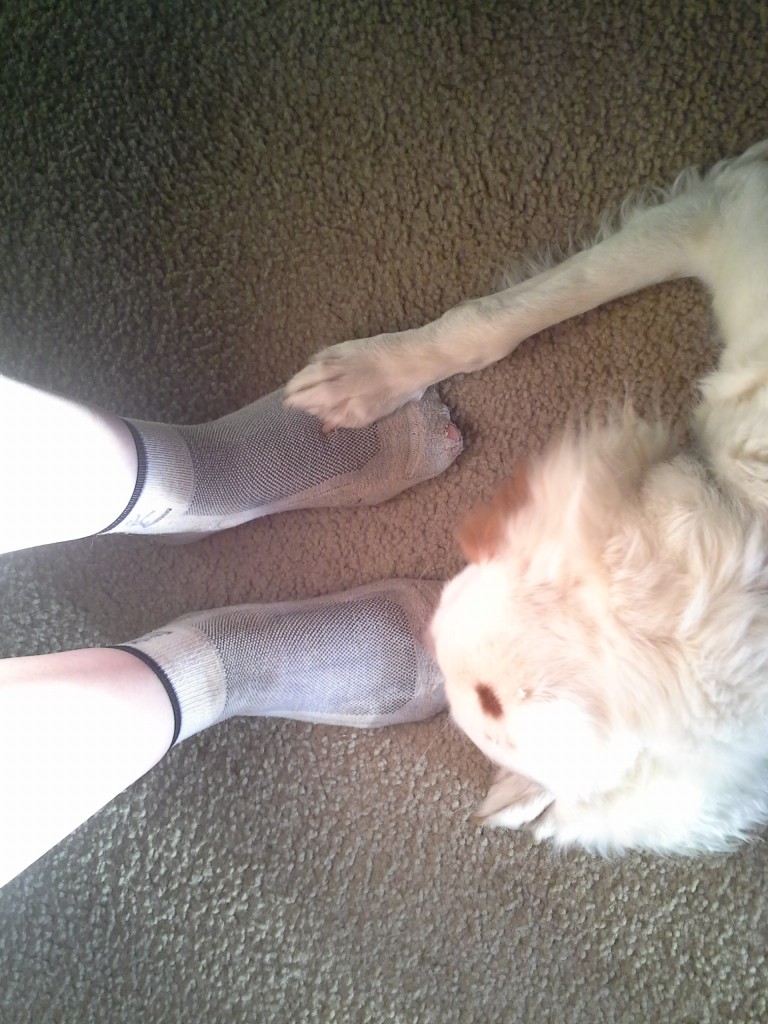 So she licked my toes. 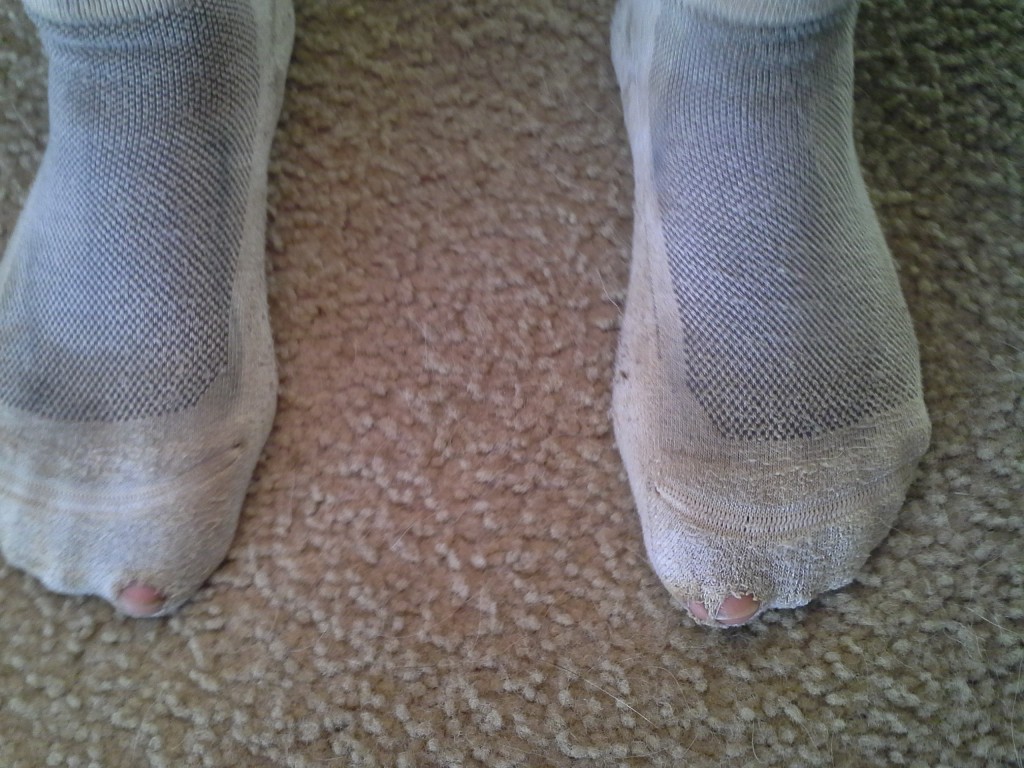 I’ve been distance running since 2003/2004. I’ve *never* worn holes in my socks. Now, any run over 10 miles results in holes. Even when my toe nails are short. It happens in ALL my shoes.  And in ALL my socks. And yet….my tonails are fine, have never turned black, and are never sore. It happens on flat runs, hilly runs, dry runs, and wet runs. It’s a mystery. And it’s related to how *something* changed when I went to bare foot running.  No holes…..did barefoot without socks for about a year…..and when I added socks back in – VOILA! sock carnage.

As have my smartwool PhD thin running socks.

It’s so bad, that I chose socks with holes in them for all my long runs in an attempt to not go broke buying new socks.

But I broke down and wore a pair of unmolested Balegras for my fifty miler.

These particularly Balegra socks I’ve had for TEN years (bought them for my first marathon). One fifty mile run later……holes :(.

Last week I snapped out of my sulk and bought NEW socks.

A pair of these 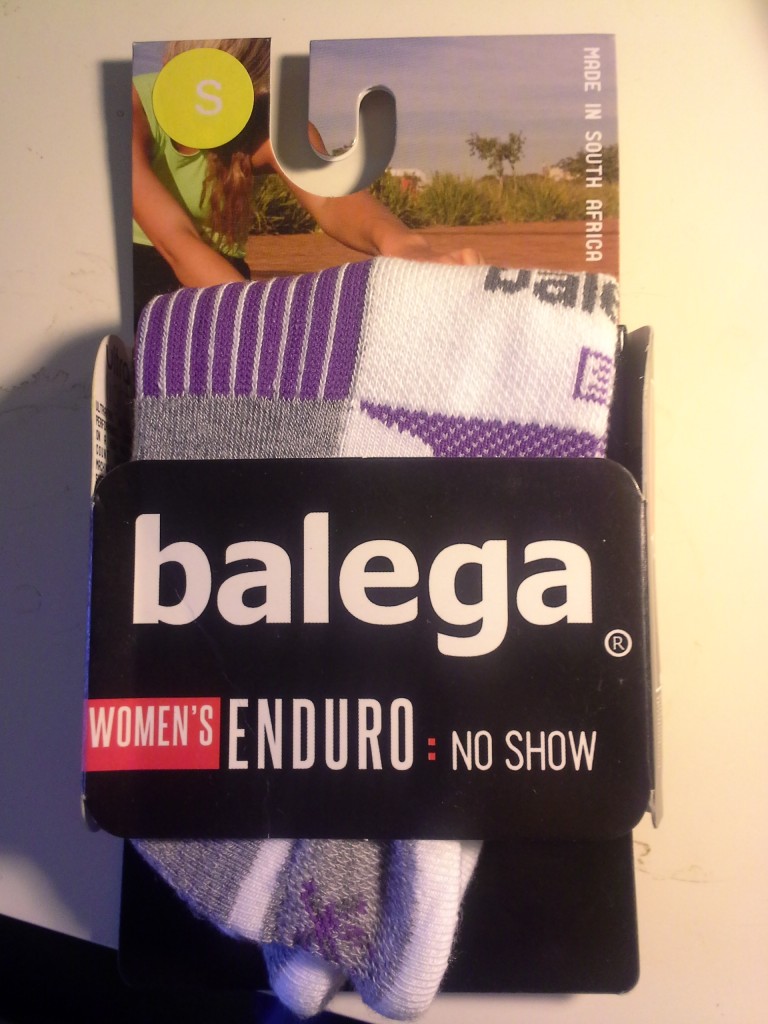 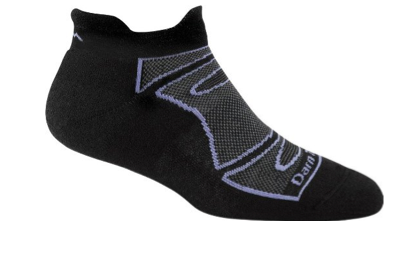 I have a couple longer runs coming up (Mt. Diablo marathon, a fifty, and at least one more marathon) so we shall see!

Speaking of running….my SF50 ultra story was long enough that I left out certain details.  Like the fact that I missed my exit to the race, which unhappily was the last exit before having to drive across the Golden Gate Bridge.

Now, by being less than a complete imbecile I had cash for toll money on me, since when I vaguely scanned directions the night before I realized I would be in the heart of the Bay Area and their nasty tolls and the less exciting I can keep my travel when driving myself hours to and from ultras, the better.

I ignored the signs towards the bridge that warned of a “no cash toll” being confident that surely I mis-understood (who has ever heard of a toll bridge that doesn’t have people to take your money?), and since I wasn’t even sure that I would have to go over the bridge in the first place it didn’t feel all that relevant to me.

Until I missed the exit, that was named something else than what it was named in my directions.

And I was crossing the Golden State Bridge. And now there were more explicit signs saying “Fastrak only, no cash”.

1. Go across the bridge and pay the (apparently) $481 fine (likely closer to $600 because of all the “fees” that CA puts on their tickets) for crossing the bridge without paying or,

2. flip a U turn on the bridge since there was no traffic.

Having the feeling that being caught in a U turn would carry much the same fine as the toll fine, with the addition of points on my DMV record, I decided to risk the toll.

Reassuring myself that of *course* it was worth running (and now I better damn sure finish) my first 50 miler even if I had just essentially added $500 to my entry.

So I’ve been watching my mail box, wondering what the fall out was going to be, when I received this:

All I’m charged is the actual Toll.

And yes, I have a headlight out – which is very inconvienant when driving through the foggy bay area at 4am.  Just sayin’.

I’ve come into possession of some book shelves and took it as an excuse to unpack the rest of my books, which until this afternoon resided in the garage.

Coming from a lifetime of reading and a childhood where books filled every available shelf space, it’s a constant struggle to minimize the amount of physical books I own.  I move so often (if you hadn’t realized….just since starting this blog I’ve had 4 different addresses) that keeping books that are easily available new or from the library just isn’t practical. Matt is not a reader and that has further decreased the available space that I can devote to books. I utilize the library, borrow books from friends, and buy ebook versions – but there are some books that earn their place and I justify making poor Matt haul them around in heavy boxes every time we move. 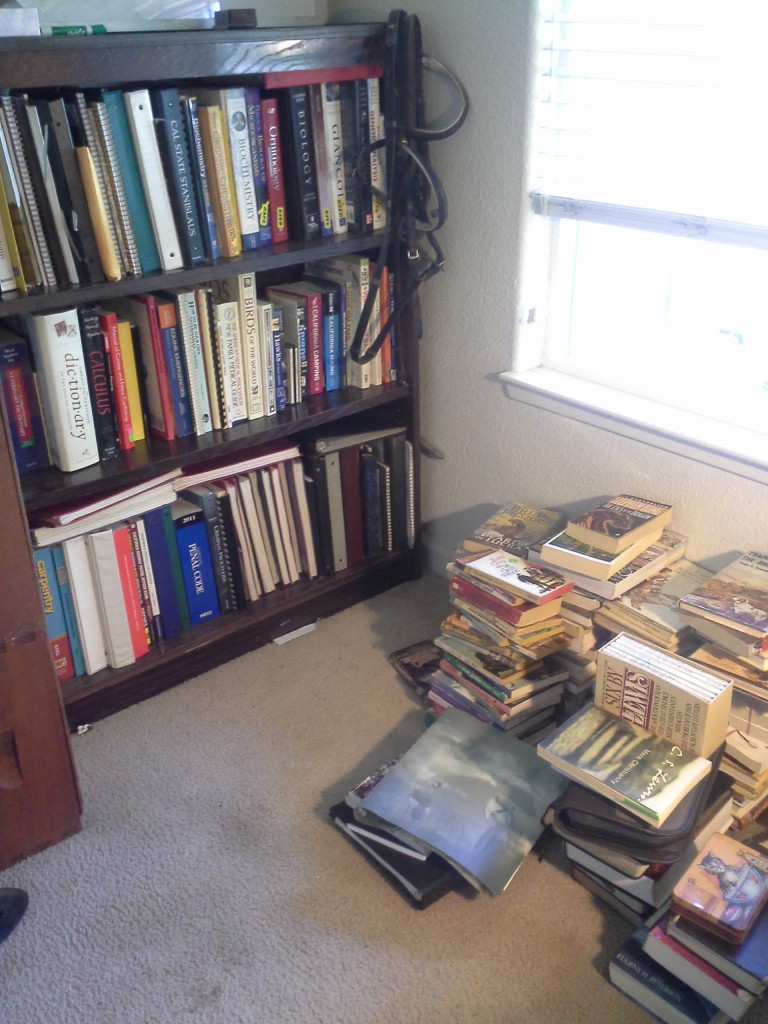 Reference books in shelf, fiction and rest of non-fiction on floor organized in stacks awaiting the new bookshelves.

As I separated my books into reference, non-fiction narrative, general fiction, childhood fiction, music, and religious – I found my old log books tucked away.

I’ve kept track of my running and Minx’s and Farley’s miles since the beginning – but it wasn’t until recently that I did so electronically.

The best riding logs were half sized planners that had “week at a glance” pages. Here’s what a typical entry would look like for a week. 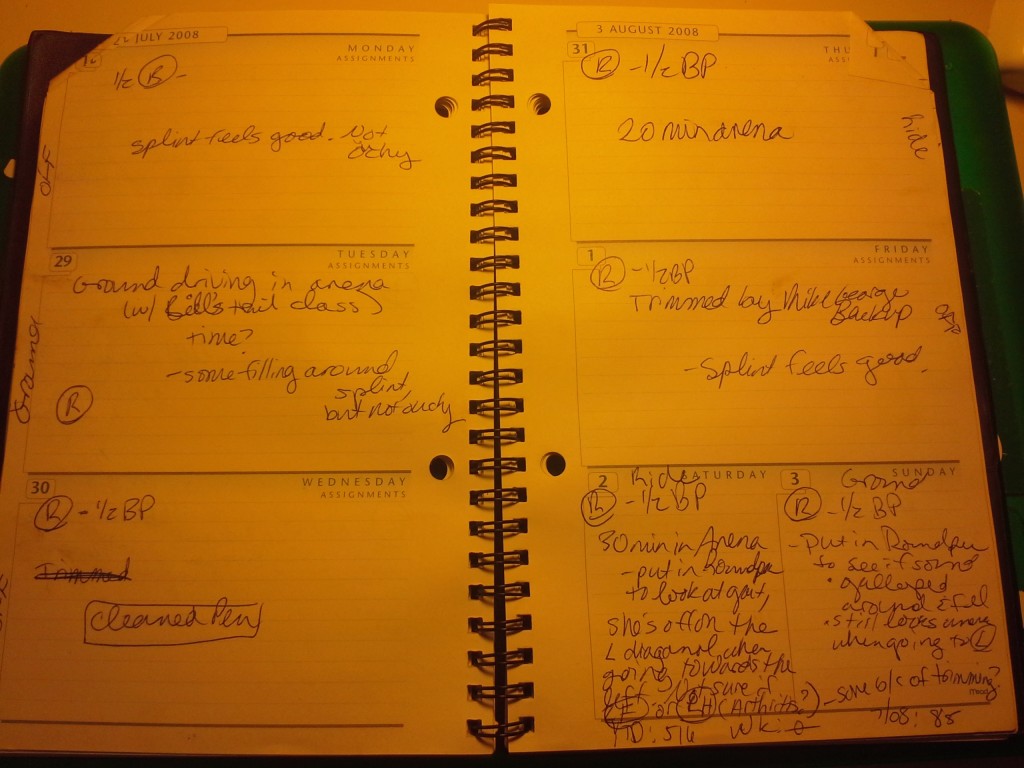 This is from Minx’s 2008 log. At the bottom of the page is the YTD, weekly, and monthly mileage totals. The circled R was ration details, BP = beetpulp. 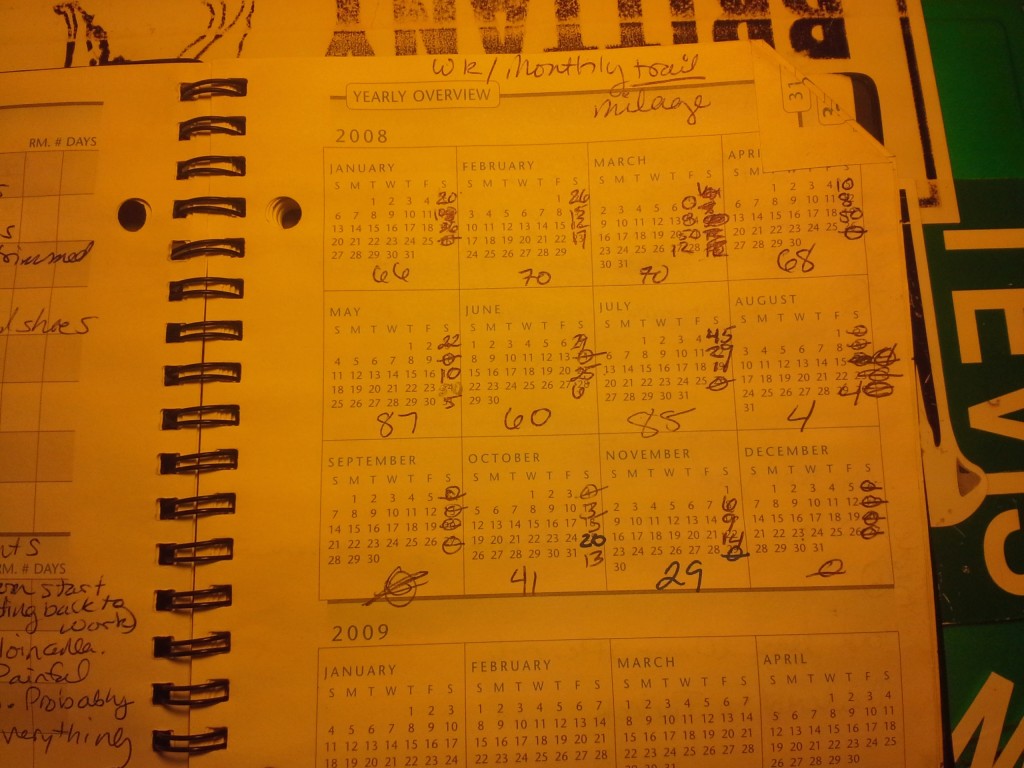 Here’s a look at Minx’s 2008 year mileage. She died in early 2009, and this represents her most successful season. 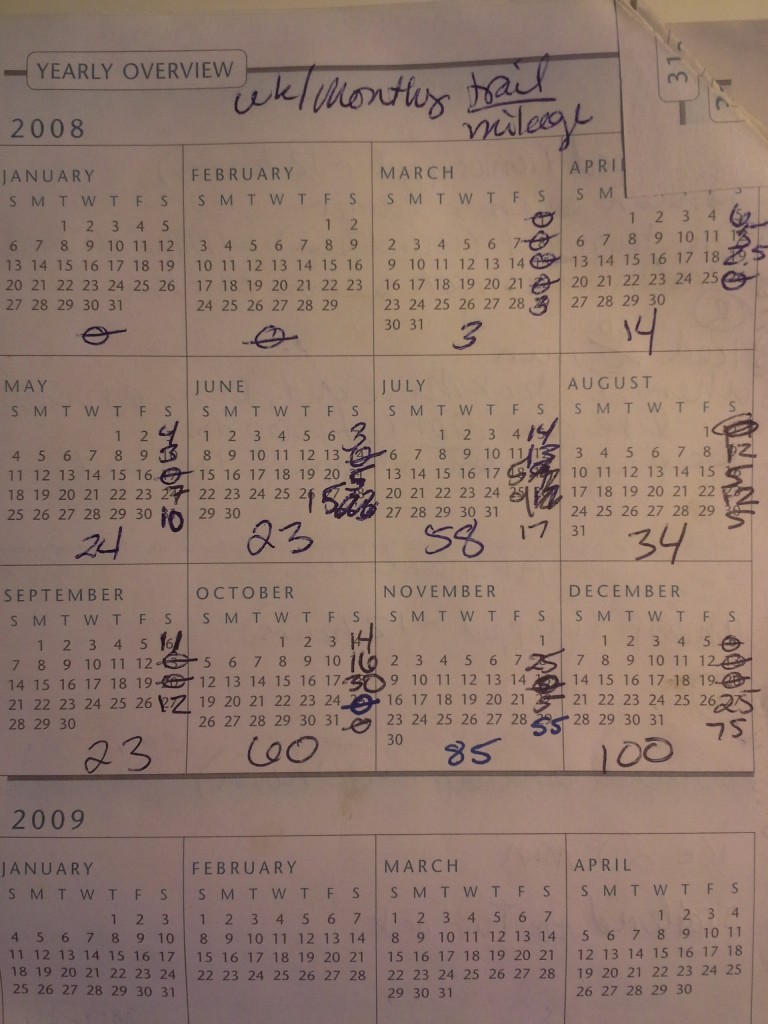 This was Farley’s first season. We did our first LD in October, our first 55 in November, and a multiday in Dec. She was injured right after I bought her in late 2007, so the zero mileage early on represents ground driving and hand walking that was part of her rehab. 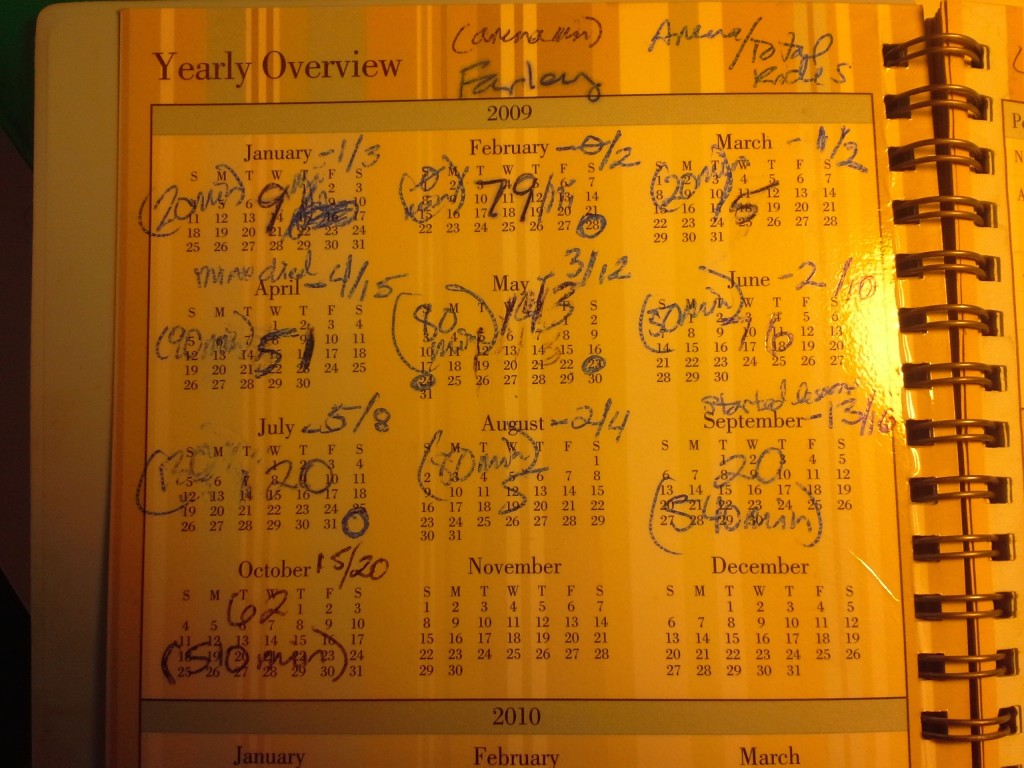 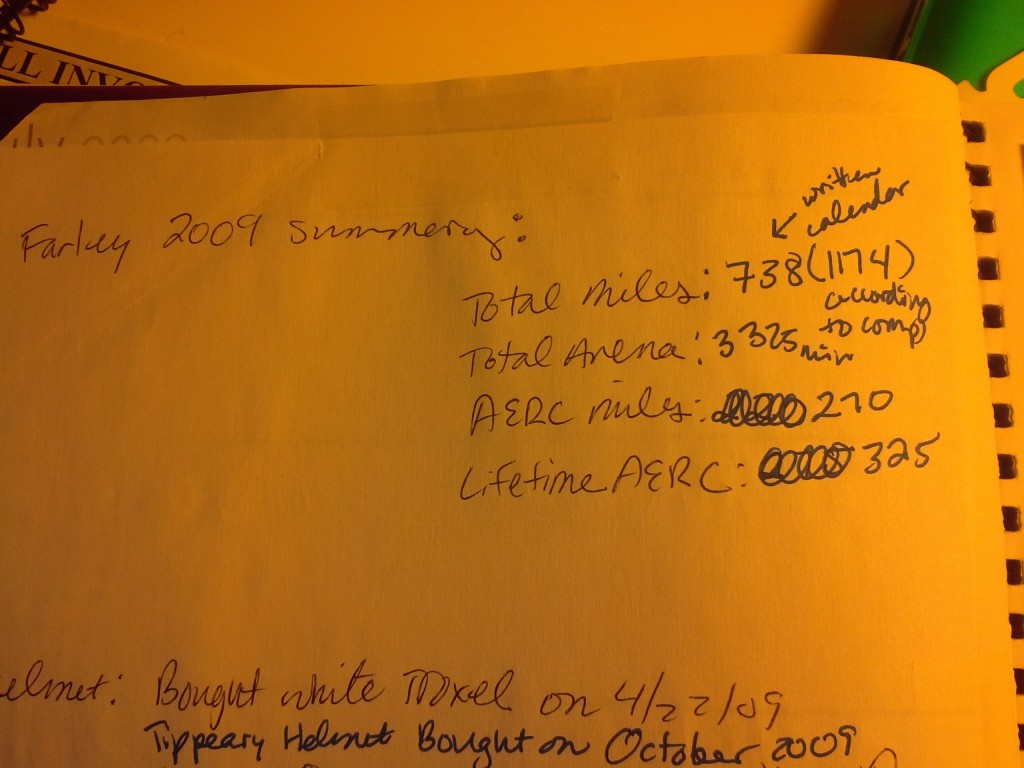 Farley’s 2010 notebook had a 2009 mileage summary. Apparently I was keeping track of mileage 2 different ways and there was a discrepancy!

If you look at my running competitions (here’s a compilation), you will see that my running tends to take place in “blocks” with long breaks. 2004 was a good running year….but then I got injuried and burned out. In 2007 there was another flurry of activity….but then nothing until end of 2013 and currently into 2014.

I’ve told the story many times of how getting a second horse (Farley) derailed my running, and how it was my mother that was responsible for all of it…but there’s nothing like flipping through my old running logs and seeing it all laid out in real time. 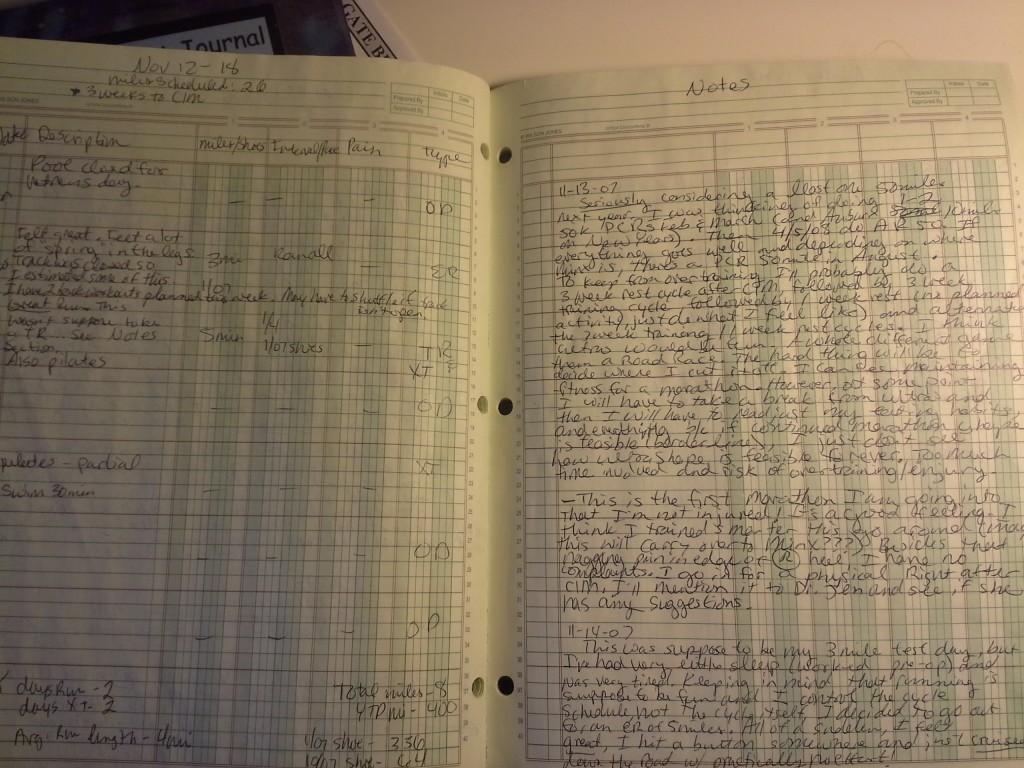 *PCR = Pacific Coast Run, which I believe split into Coastal Trail runs and the current PCR group of runs.

The notes continued for same week, later in the week. 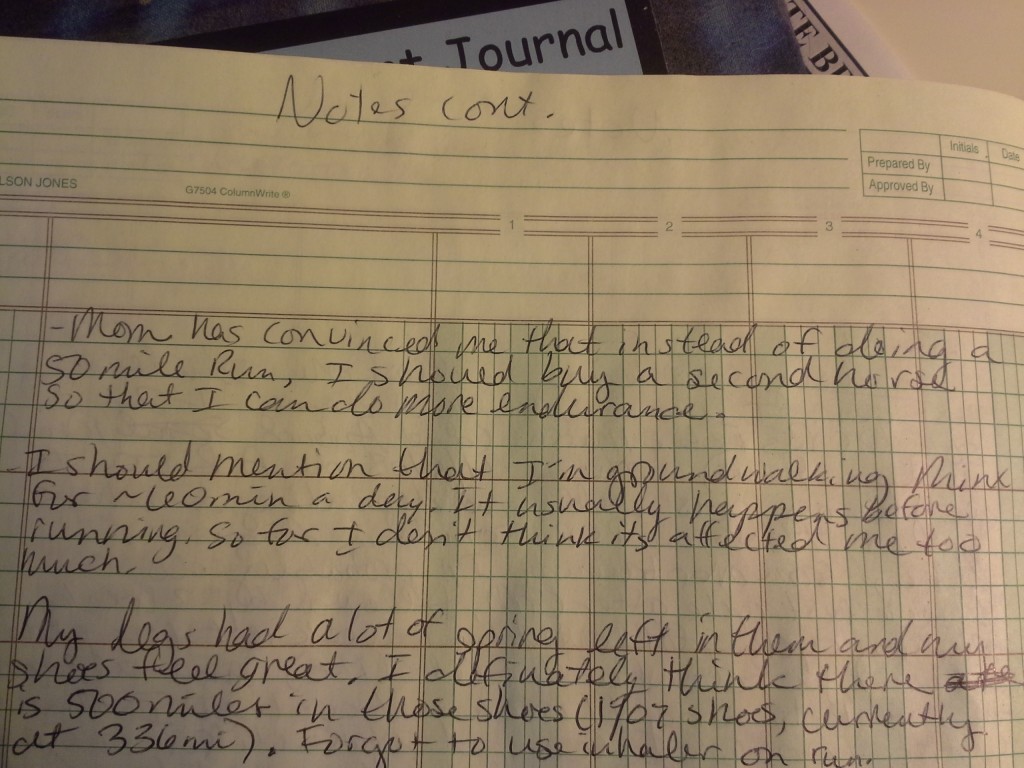 “Mom has convinced me that instead of doing a 50 mile run, I should buy a second horse so that I can do more endurance “

And that was Farley!!!  I bought Farley about 2 weeks after this entry, severely under-trained for my marathon 4 weeks later, and that was the last time I ran over 13 miles until the beginning of this year! 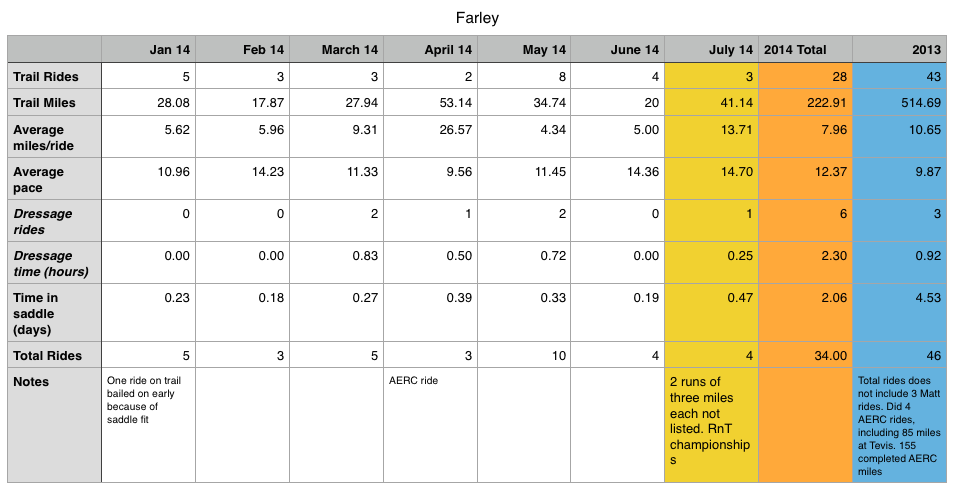 I think I have wasted a sufficient amount of time writing this post that it’s time to go back to wedding planning (less than a week until we elope!) and forcing myself outside for some pony time and possibly a run.