While the statement I made in yesterday’s post about not drilling Merrylegs in the finer points of anything is mostly true – the exception is getting in a trailer.

Even at the tender age of two, I want “get into the trailer” to be a completely automatic response as quickly as possible.

It is good to know your strengths and weaknesses.

I am not especially good at teaching a horse to get into a trailer.

I lack patience and have an abundance of caution when it comes to trailers. This is not a good combination when faced with an uncooperative horse.

I have a lot of reservations about playing with a horse inside of a steel box that is not 100% cooperative. I’ve seen a lot of accidents – minor and fatal – that involved both humans and horses that involved trailers, so I have very little tolerance when it comes to horses being stupid around trailers and a complete aversion to anything that resembles “escalation”.

Combine that with the fact that I free-leased 2 horses that were inconsistent about loading that refused to get into a trailer when it really mattered (on the way to rides) and it was the most frustrating and disappointing thing EVER. I spend enough time and money on horses that they need to be fun and I have no interest in owning a horse that has a hang up about trailers.

The net result of all this is that my number one requirement when it comes to getting a new horse is that they must load into a trailer with little to no drama.

So, it’s a bit ironic that all three horses I’ve personally owned did NOT get into a trailer well when I bought them.

Each was a reluctant, but not dangerous, loading horse that was perfect in every other way…

Knowing they weren’t auto-loaders and knowing my strengths and weaknesses I always had 2 options in mind when bringing my new ponies home:

So, considering all the above, you may be surprised to learn that *I* am the one that taught each of my three horses to load.

Trust me, *I* am shocked and surprised as you are.

Perhaps the very fact that instant the lesson “didn’t feel right” I had given myself permission to “wimp out” and go to one of my other very reasonable and smart options, made the difference.

Today’s post does not come to you from a “self-proclaimed expert” on how to teach a horse to load. I don’t even claim to be particularly good at it. But being able to solo-load is an important milestone for me and ML, and in the middle of a trailer loading lesson, I also got a glimpse into the sort endurance horse ML is turning into.

The only time ML had been in a trailer was the day we brought her home – so I got to see how she loaded with the trainer she trusted. She did well with minimal encouragement, and was surprisingly calm. The trainer got into the trailer with her, I encouraged her with a whip from outside the trailer (very minimal). Once in, someone else held her from the drop down window while the divider was closed, then the window was carefully closed, then the trainer walked out of the trailer and the big door was closed.

Overall the process was calm, positive, and successful – but it was a long ways away from me being able to load her by myself.

Starting last month when I would bring Farley back from a trail ride, I would leave the trailer hooked up to the truck and do a little work with Merrylegs.

Carrots, a mash, and me inside the trailer. 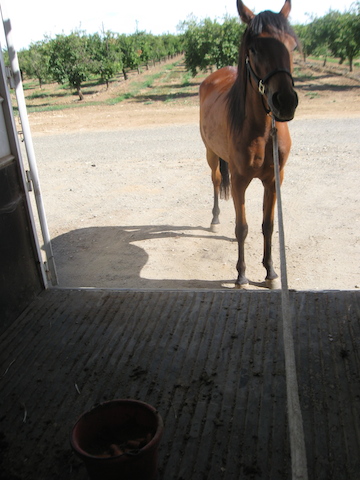 No pulling, just standing there letting her check it out. 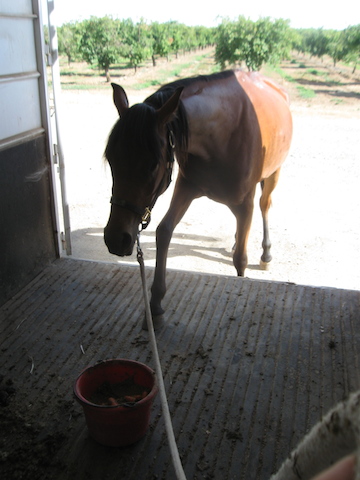 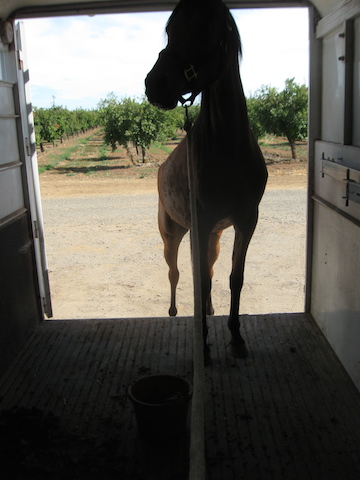 We did 2 of these short sessions and the end result was that ML would step on and off the trailer with her front feet willingly, waiting until I cued her to unload.  2-3x per session she would load in all the way with all 4 feet, but never stayed for long and was nervous about stepping off the drop and wouldn’t relax and stand there with all four feet in the trailer. I tried gently encouraging her to step forward with verbal cues and halter pressure and side to side pressure that would cause her to move her feet etc, but I didn’t get instant results and I felt like I was setting up a scenario where she was learning to ignore pressure and requests. 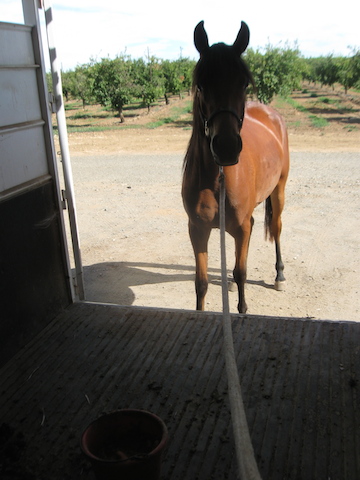 So, today I brought out my secret weapon and tried something new.

The secret weapon is of course, Farley.

I put Farley in the front compartment with a mash. Hoping that my once reluctant trailering horse was seasoned enough to ignore the inevitable banging and trailer movements of a young filly learning to get into the trailer. (Farley: mmmm….mash…..yum num slurp) 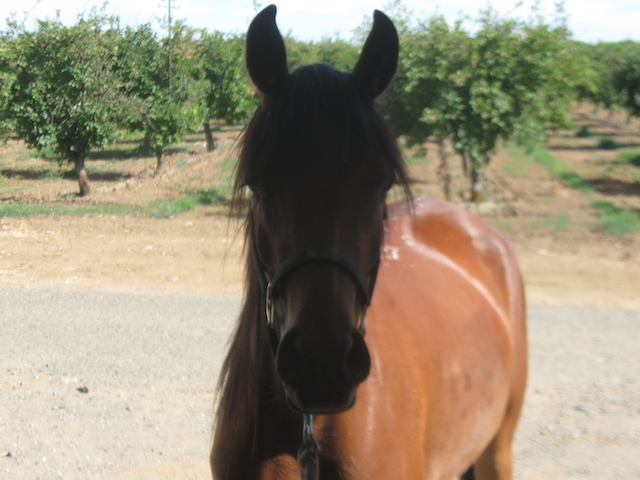 I put Merry on a long cotton lunge line and threaded it through the dropdown window in the middle compartment, placed a bucket of mash on the floor beneath the window and stood outside the trailer at her side, with a short lunge whip.

The idea was to keep her head pointed forward towards the trailer but not pulling while I encouraged her with pressure from behind.

In fact…she drove into the trailer so willingly I probably could have used a long lead rope and eliminated the long lunge in the front.  In fact, the word *should* instead of *could* would be appropriate.

What is the blog for if not to share lessons learned by *me* so you are not doomed to repeat them?

Here’s the lesson to be learned from this situation: When teaching self loading, try just using a lead rope first.  If the horse won’t stay directed at the trailer and you need to add a long lunge to thread through the front….then well – do it. But if you *don’t* need it, then it eliminates a bunch of things that *could* go wrong.

Like…..a horse self loading much more quickly than expected and trying to balance no pressure on the face with “minimizing” slack on the rope, and having too much slack for a brief moment.

Which is not a big deal unless….

At first I thought she was just coming to see Farley and use her for comfort, and then I realized that she was actually focused on me.

ML was convinced that whatever the issue was, *I* was her answer to solving it.

I can’t even tell you how it felt to realize how much trust she had in me to to fix whatever was scaring her.

And then I realized something else.  She had bolted away from home scared and panicked at a dead run, but she had come back, with a quiet eye, convinced I was the answer to fix this. Even though she was still trotting and cantering in a circle around me and reacting to the rope, she wasn’t panicked anymore – she was actually calm. She was still moving because she was unsure and the sensation of the rope touching her in that way was unfamiliar but she had 100% confidence that I was her answer and was looking towards me for direction.

That my friends, is a sensible endurance horse in the making.

It reminded me of the moment I realized Farley had what it took to be a sensible endurance horse.  During a ride, early in her career, there was a stretch of slick-as-ice asphalt. You were required to dismount and the horse and rider teams would carefully walk on the narrow shoulder until it was safe to mount again. I had done this stretch with Minx several times without incident, but Farley was choosing *not* to stay on the narrow shoulder and kept wandering out onto the asphalt.

She slipped and went down.  The only time I’ve ever seen this horse go down ever.

She attempted to get up – and slipped and went down again.

And attempted to stand again…and slipped and went down.

I stood there with my heart in my throat, not able to do a thing.

And that’s when I realized I had an endurance horse that could take care of herself and wasn’t prone to panic when she gets in a tough situation. (and she stayed on the shoulder after that!)

I think this also illustrates the differences between ML and Farley. Merrylegs looks to me to solve problems with absolute trust. Farley is self-reliant and a good problem-solver/decision-maker. It’s going to be very interesting to see how these 2 tendencies play out differently over their careers, or if ML becomes more like Farley as she gets older.

When Merrylegs came to a stop and I approached her to unclip the lunge and put on her leadrope, and she was surprisingly chill and not trembling or snorty.

Part of me said “end the day here and hope that incident isn’t associated with the trailer”.

The other part of me said “just try it once”.

I loaded up Farley and situated her with her mash….and then stood beside ML and asked her to load up.

Turned her around and unloaded her, which she did calmly without flying off the edge of the trailer.

We repeated the cycle of her getting on and off solo a few more times. Then I started stepping into the trailer after her once she had loaded to stand at her shoulder while she ate mash and give her scratches. Repeat. After the mash was done, she gave me the best unload yet – a pause at the end of the trailer and with gentle encouragement a nice calm step down.

I unloaded Farley and then turned my back to the trailer and ML while I sorted out leadropes….and ML tried to self load herself again!

I call that a success.

(and may future successes not include any further proof that Merry will be a sensible endurance horse and instead be boring and utterly predictable training sessions….Amen.)

PS: For those of you that don’t know, this is my current trailer: 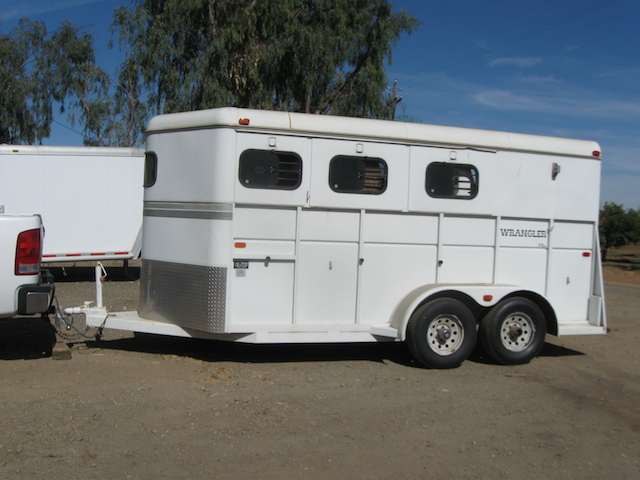 This was *not* the trailer Minx and Farley got to learn to load in.

They got to learn in a reasonably sized 2 horse straight load, with a ramp. 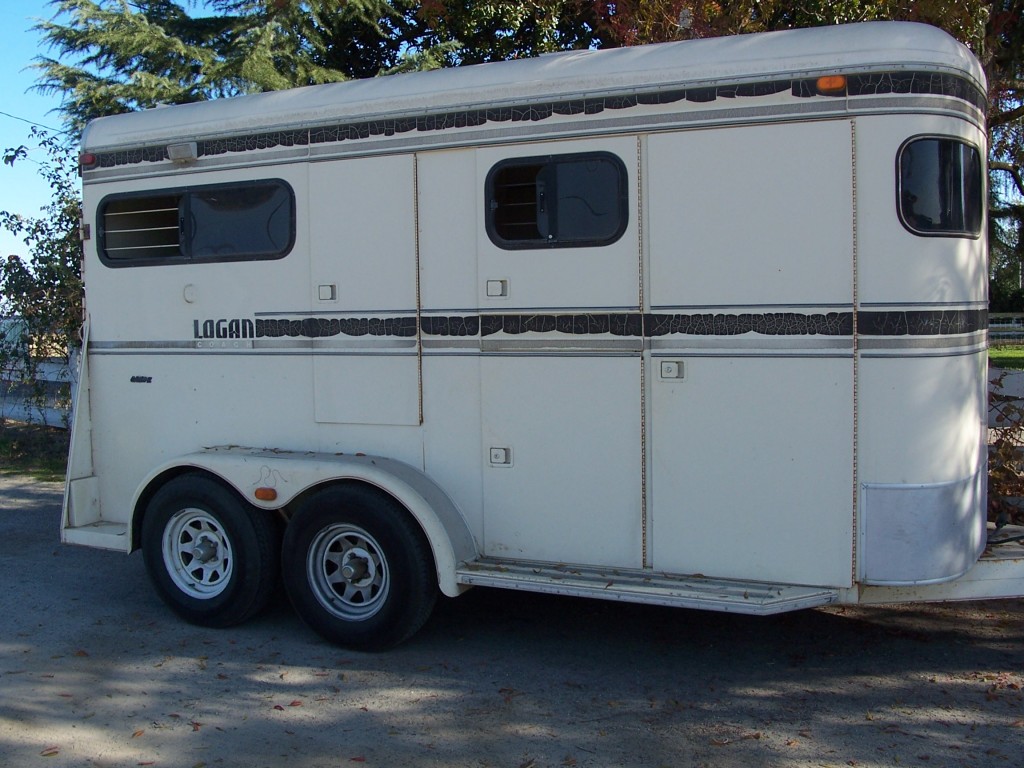 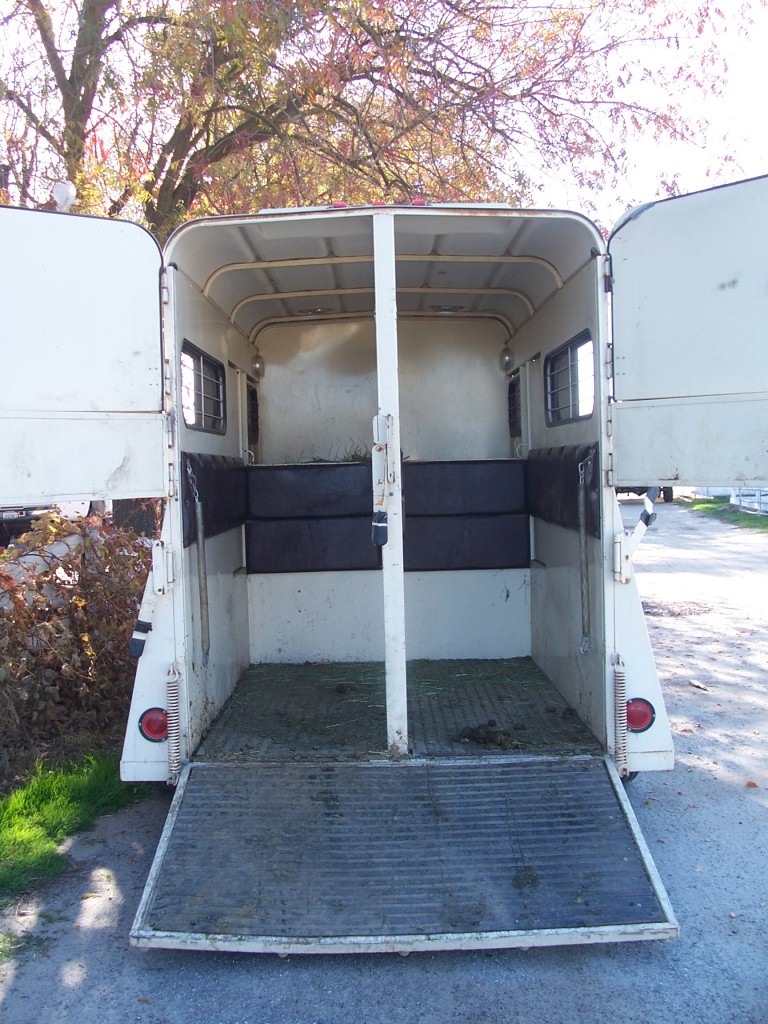 Merrylegs got it easy!