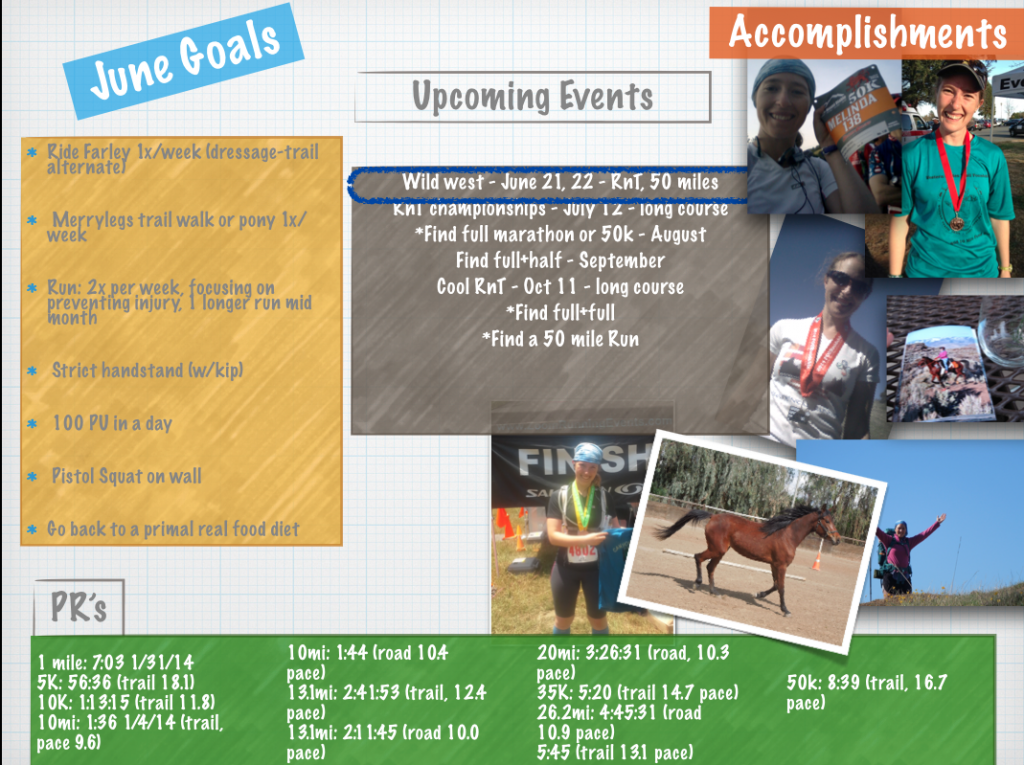 I predicted in the May IRL post that June would be a quiet month based on the sheer volume of work I had done in May.  Sure enough, June brought reduced mileage, runs, and rides – but not necessarily for the reasons I predicted. Instead a hamstring injury and family tragedy sidelined me for most of the month.

As with anything, there are 2 sides of the coin.  I can choose to look at June as “rehab and recovery” or “lazy and unmotivated” and I think my Dear Reader will wholeheartadly agree with me with the choice of “rehab”.

After all, it’s not every month that can boast of starting with a can-longer-walk hamstring injury and finish up with a that-interval-run-felt-fine. And we will just leave out the part where I didn’t realize I had an injury until three quarters of the way through the month, but oh how convenient I hadn’t done anything stupid like *run* in June?

That’s me, the eternal optimist.

What was new in the month of June

Why does Merrylegs get to do “so much” every month? Because she’s an absolute joy and pleasure to work with. And makes everything easy (Farley, are you taking notes?).  I’m not pushing her at all right now – just sorta experimenting and seeing what’s easy and what’s hard for her. She gets lots of time where we just hand out and I groom and scratch – no drilling or real “work” right now – she’s just a baby!

*whipping branch = that long flexible branch on the ground that stretches forward as you walk past it only to have it whip back into the unsuspecting creature behind you.

The first 2 weeks of June I was out of town. Farley got out 2x/week when I returned which was over and above what I thought would happen….but that doesn’t necessarily mean I’m especially happy with how much those 4 rides prepared us for ride and tie championships in 2 weeks.

The June 29th ride was a bit of disaster. Distance and time is a complete guess. A couple miles into the ride she was moving really funny.  I’m almost positive it was a muscle cramp.  Was completely gone after I trailered her home (1 hour) and turned her out. Muscle cramps are out of character for her, but I think it was a perfect storm of events. She was a complete and utter ASS and spooking at various things because she didn’t particularly feel like being out there that day. We had a discussion with a crop of what exactly I expected of her since lack of work ethic+behind my leg = “permission” to spook at sticks and branches on the ground. Combine that with her being a little tenderfooted from being trimmed really short (whole ‘nother story there) and I had forgotten to boot her fronts and she was doing some fancy footwork trying to avoid rocks. So, probably from side ways spooking + getting whacked with crop and surging forward + fancy rock avoidance footwork caused something? Or was it related to the treeless saddle – this was the first major trail test for it. Even if it is as minor as a one-time muscle cramp, still doesn’t make me especially happy 2 weeks out from a major event.

There is some backup plans for Team Hot mess if Farley can’t do championships….but it would be nice if something went to PLAN for a change. It’s a bit much to expect a team made up of a pregnant lady, AND a recent hamstring issue partner, AND wtf-different-horse-at-last-minute to have a stellar ride….but again our name *is* “Hot Mess” so what did I expect?

4 rides, no dressage, slower than average, and a weird lameness event…Not much to be happy about..but that’s what these IRL posts are for – a look into the unedited version of what other people are doing, so there it is. 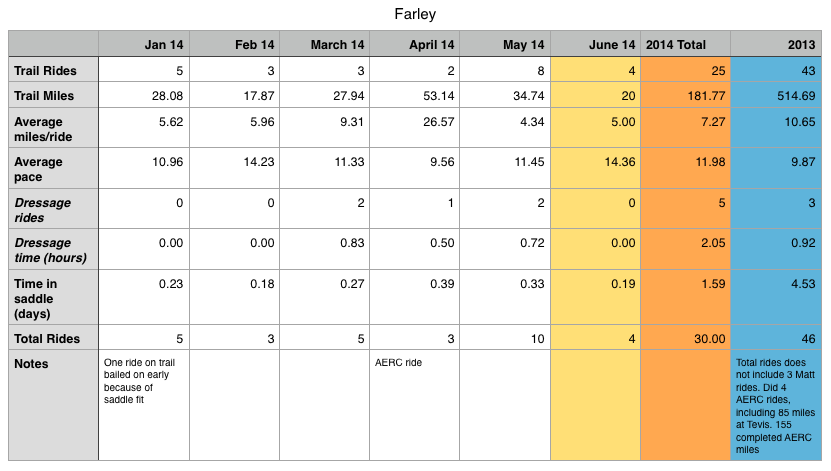 5 runs.  One of the five was classified as a “interval” run, but the purpose of the run was recovery, just like the other 4 runs. Today’s interval run was to see how far along in hamstring rehab I was, and was less of “high speed intervals” and more “accelerate the pace and hold it for short periods of time”. The verdict? The hamstring is 99% there and feels GREAT.

When I crunched the numbers I realized that June 2014 looks a lot like March 2014 which is great news, because March was foll0wed but some really awesome running in April and May. If you take a look at my upcoming events on July board at the end of this post you will realize I have some big plans for July and August. 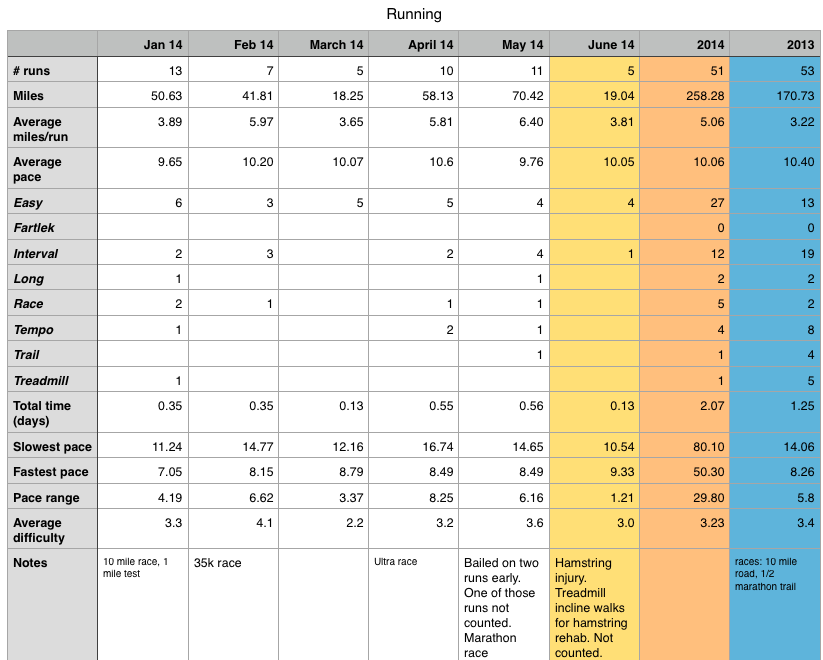 The big questions for the upcoming month of July are….

I’ve changed my weekly goals for weight training/Farley/Merrylegs slightly for the month of July, and cemented my if-I’m-not-on-call race schedule for the summer and fall.

I liked the look of June’s board so much that I kept it the same for July, and just changed the content slightly. 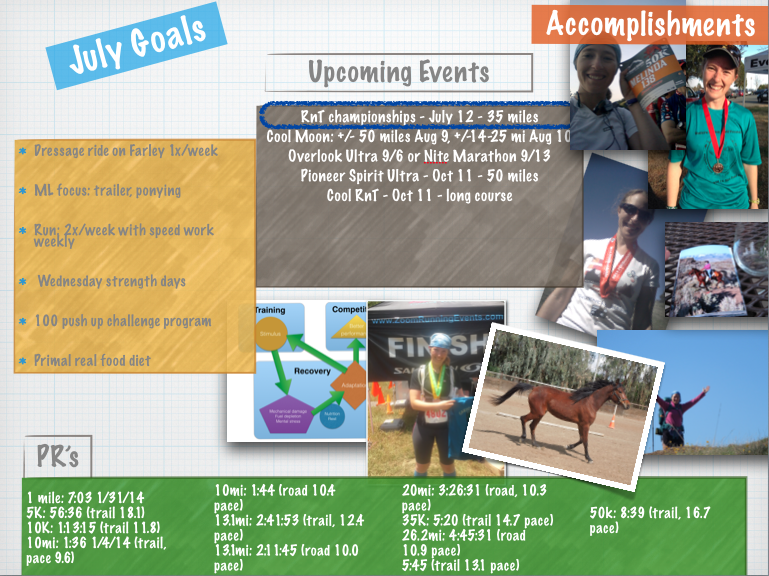 ***Random note: I realized that June was the first month that I wasn’t able to add a picture to my “accomplishments” section. It was a tough month in a lot of ways, but that doesn’t mean I didn’t do stuff I shouldn’t be proud of (try and make sense out of all those double/triple negatives, but you get what I mean). I decided to put the graphic from my rnt essay on the board. A bit unusual compared to the rest….. but it was an accomplishment all the same and win or lose, I’m proud that I put something together that I felt OK about submitting.

Time for random picture of the month.

This may or may not become a regular feature.

Sometimes I end up with a picture I really love and want to share…..but can’t for the life of me figure out how to make it relevant to anything.

And really, even though it’s *my* blog and I blog about what *I* want to – a side effect of no one paying me to do this, and in fact *I pay money* to host it – I do try to keep things related to endurance, horses, running, and what I *do* in life.

This is a simply a picture of me standing there. With Matt. At his older brother’s wedding last month. 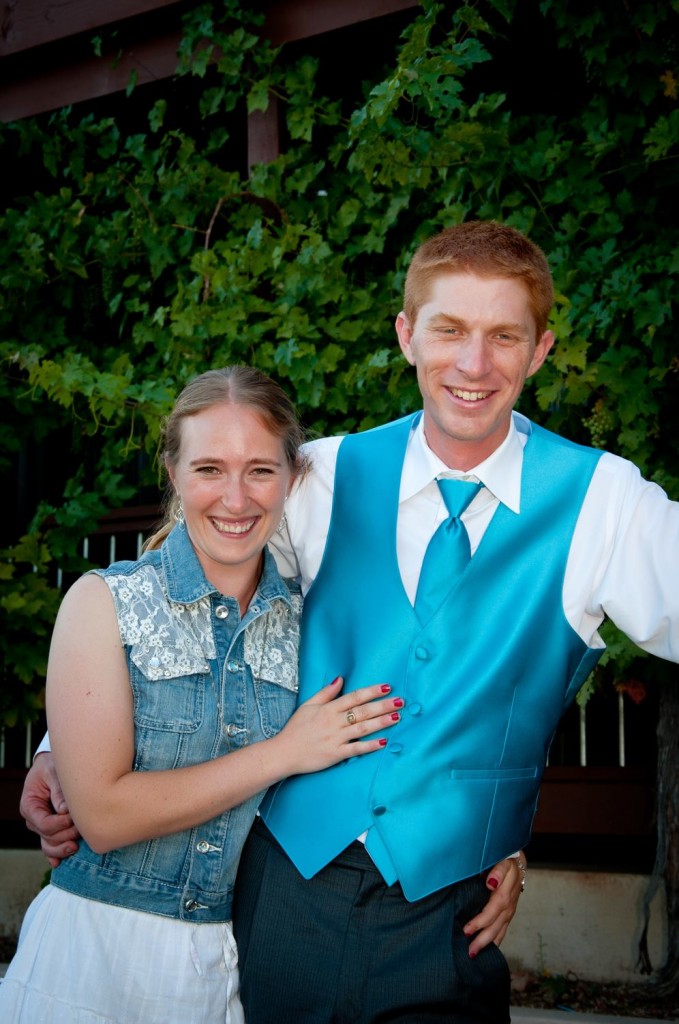 It is also taken by one of my favorite local photographer, who I had the pleasure of attending high school with way back in the day.  Tina Evans makes taking photos fun and always gets awesome shots. This was casual photo on the lawn and after making me put down my wine glass, she snapped a few photos just because.

And that my Dear Reader, is a wrap for June.

First time visiting my IRL posts? Wondering why I blogged about the mundane?

These “In Real Life” posts are designed to show how a conditioning program is being applied “real life”. It’s one thing to talk about the ideal program – it’s quite another thing to see how an actual person is applying it real life horse.  Maybe you are a new rider that is trying to find the balance between rest and miles. Or maybe you are like me – you’ve been doing this for a while with varying levels of success and you are interested in seeing what other riders are doing.

To view previous IRL posts, go to the category “Conditioning” and look for the tag “IRL”.