Tig goes on a trail ride 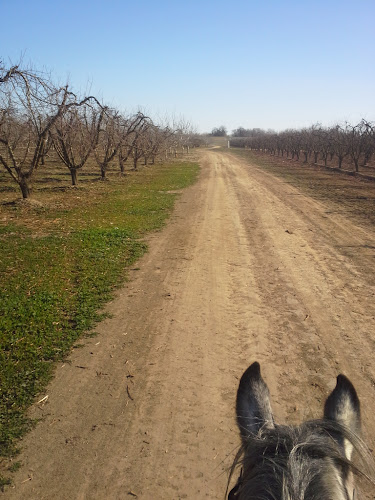 This was Tig’s third ride.

Wednesday I learned that Tig really wants a job (and that she has an awesome, sensible mind – a story I will tell at a later time….)

Thursday I learned that Tig really smart. (probably too smart for her own good).

Today I learned that Tig is really brave.

This morning Tig and I hit the trail. She’s given me some mixed results in the arena. Nothing too naughty, but nothing too wonderful either. Feels sort of green and lost and a bit frusterated. Part of the arrangement is that Tig gets a trail ride every week, so off we went.

Immediately there was improvement. She was focused, interested, and willing. As we made a lap around the orchard there were men and vehicles working the field (replanting an orchard) and she did me proud. Gave me a couple of big spooks, but mostly marched along playing young horse looky-loo. She was forward and confident and for the first time I felt like I had her buy-in for the day’s agenda. Even as a very young horse, she had no problems confidently going down an unknown trail, going away from home. I tried a new section of trail that didn’t work out and I had to turn back, and she gave me ZERO problems going back the way we came, and when we turned away from home to finish the loop instead of continuing home, she didnt’ even hesitate.

After the ride I felt a subtle shift in Tig’s attention/attitude towards me. It was like she was looking at me with new respect or interest – here is a person that is going to make my life interesting and this might be fun – is what she seemed to be saying.

I think she’s sick of being lunged. I think she’s totally bored of the arena. I think I’ve just found the way to Tig’s heart we are going to get along just fine!

5 Responses to Tig goes on a trail ride