I’m behind on my blog reading because a bunch of e-library books that I requested all came through at the same time and I’m desperately trying to read them before they expire, but I still managed to read enough online content to put together a decent I-should-be-working-but-instead-let’s-waste-time-on-the-internet distraction. Enjoy!

Nice to know I’m not the only one that feels like this sometimes. Sometimes it’s even my OWN events that don’t work out that I’m not that sorry to have to stay home and spend the time with my husband and puttering around.

This was sorta fun.  I admit that I plugged in my numbers as of the first of the year BEFORE I was pregnant, since now that I’m sitting here 2 weeks post partum with 15 pounds to lose and a longest run of 1.7 miles the quiz would be much much less fun. 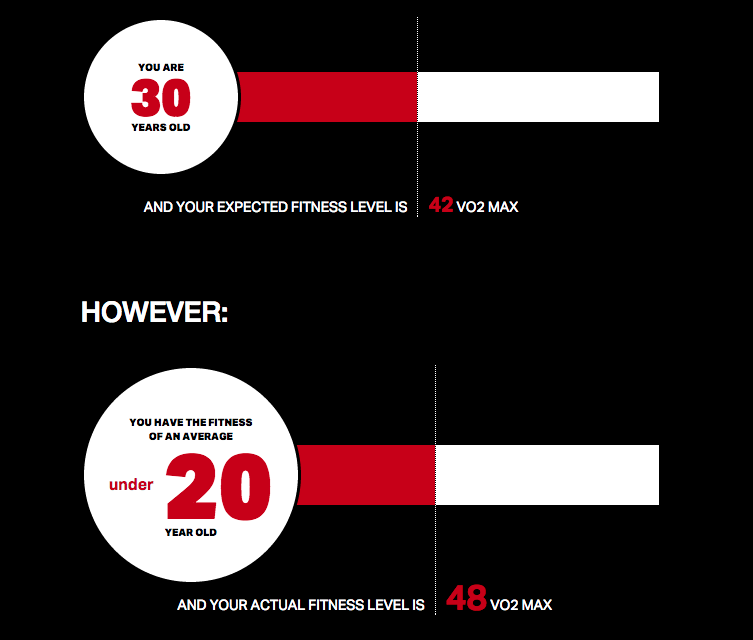 I should take more regular conformation pictures. Heaven knows I only have about a thousand pictures of hooves over the years. Surely I could manage to take one or two decent confo pics a year? Here’s tips on how to get the best shots.

Hahahahaha. No it isn’t always this bad. But sometimes it absolutely is. The dark side of owning a horse trailer. LOL.

There’s a couple of running icons that were at their peak when I started distance running and like the pop music that was popular when you were in high school that as far as you are concerned will never go out of style, that’s how I feel about Paula (except if she ends up convicted of doping. In that case FOOEY ON HER), Meb, and Deana. So can you blame me if I’m a little giddy seeing Meb is still going strong?

A study on whether expensive running shoes are better then more affordable ones. Spoiler: doesn’t look like it. I used to be a huge proponent of buying high end shoes that were biomechanically matched, yada yada yada. I’ve gradually reversed myself over the years and agree witht he reserach that it probably doesn’t much matter, and you should run in what feels good. If that’s $150 dollar biomechanically matched shoes, then yay for you. If it’s something minimalist, or cheap, or off the wall at your favorite low priced retailer, then that’s OK too. I have more injuries from continuing to run in “the right shoe” then I do from just running in whatever felt good at the moment.

Here’s a cool graphic from the link above. Wouldn’t it be cool to see something similar for tack, such as saddle or pad brands? I’ve circled and done rough ratings on the brands that I’ve ran significant mileage in. The 2 brands not on here that I’ve run lots of miles in recently are Soft Stars and Unshoes. Both would rank on the left hand side in terms of expense. The Soft stars would get a “Love” from me, and the Unshoes would get a “meh” for running (but a “love” for every day wear). 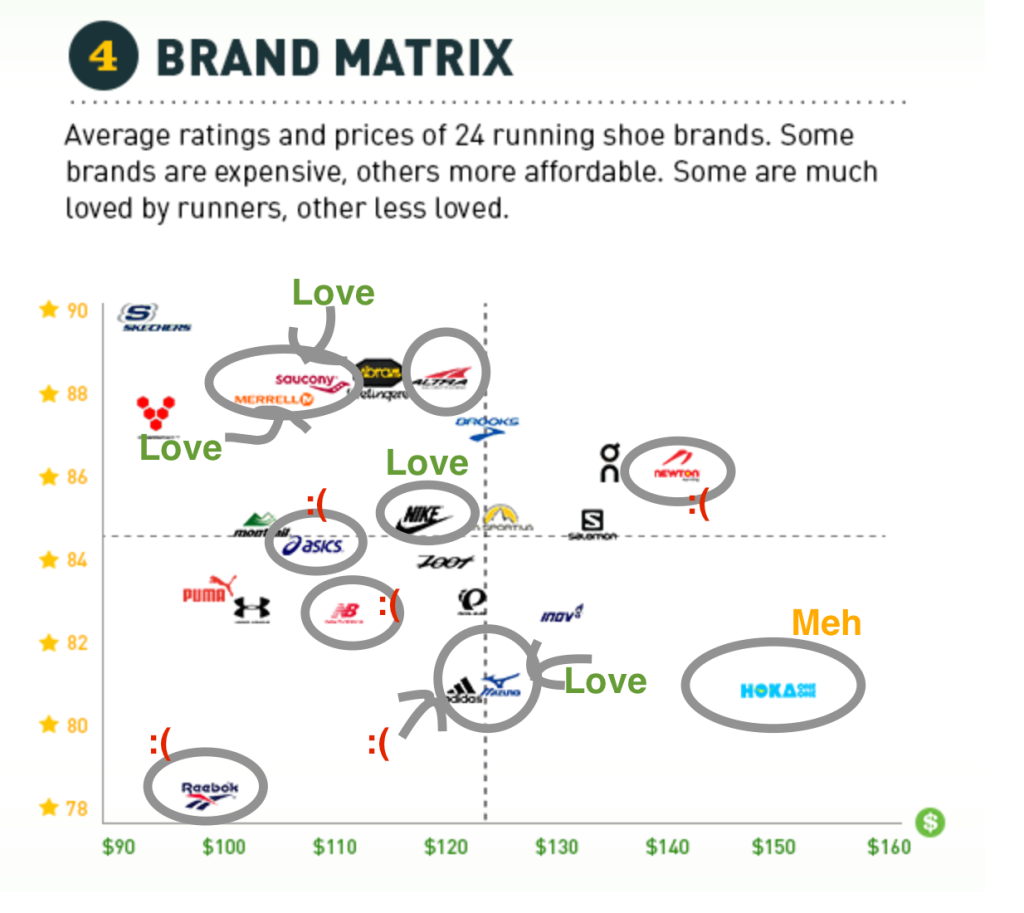 This guy has put together what he feels are some of the worst mistakes you can make driving that cause accidents. Some I agree with, some I don’t. I’ve actually had a lot of these scenarios happen to me, although none with serious results. I understand his concern with clip on lines/reins, however I do use snaps/clips on my lines/reins and will probably continue to do so. I’ve prevented a lot more wrecks by having the ability to clip the reins/lines on/off and have never had a wreck or even a close call associated with having the clips. This applies to all my driving experience AND all the hours and miles I’ve logged on the trail in endurance where I use clip on reins. Some might argue it’s just a matter of time until the clip fails, however I’ve had reins (never driving lines thank goodness) break that didn’t have clips, and had to untangle harness horse wrecks thtat didn’t have snap on lines many times during that same time period. So. In a world where nothing is completely safe (we are talking horses here…) like everything else it comes down to risk assessment and the risk benefit balance.

In case you missed it I wrote a post over on the Food Adventure Blog.

There was this article on why women are a minority in ultra running.  My opinion? Meh. I didn’t really identify with any of it. But this article that provides a different perspective on the same subject? YES. “Women tend to feel guilty for pretty much every choice they make in life, but we really feel guilty for taking time away from our kids. We feel like we are not entitled to time to ourselves. We are not being good mothers if we have our own needs and goals in life“. Yes. Stop it. I literally cringe when I hear other women doing this.

Of course, maybe there’s a minority of women doing ultras because we are all too busy over here riding our horses in endurance. 😉

On the other hand…I won’t lie. I like it when I’m in the minority. Whether it’s my job or running ultras.

Post something potentially offensive that has nothing to do with endurance, horse or human? Ummm…sure! Why not! I take contributing charities very seriously and there’s a couple of large campaigns that really bug me. This is one of them. Please do your research before donating and make sure your money is going where you want it to go. You don’t get karma points for intentions and picking the pink colored lunch meat container isn’t “better then nothing”.

Karen nailed it for me of why I blog and how I feel about you, My Dear Reader.

Hahahahahaha. and Yes, as always, Renegade Mothering has language. Be forewarned.

Gogo was a blog I followed when I first started blogging. I think Andrea’s tribute this year has a lot of good points that we would be wise to remember. Just because you made the best decisions at the time doesn’t mean you can’t learn from your past. Just because you are determined not to let history repeat itself doesn’t mean it won’t happen anyways despite your best efforts. When it comes to horses, we rarely have as much control as we pretend or fool ourselves into thinking we have.

Is there any other way to train? The power of a fear based plan.

Love me a good ride/race report. This is a 100 mile report and an example of a fear based plan not working so well… (that’s happened to me too…both running AND endurance riding)

Sometimes Tevis does these types of surveys. Wish we did them every year!  I know for myself, I wouldn’t mind filling out a survey with brands and gear lists! (in fact I might have to admit I take a guilty pleasure in completing surveys…..even when I should be doing other things). Here’s another simplified version of the results.

Is this issue with the IUD true? I don’t know, but (have to be careful with this assumption but….) it makes sense from a biology/physiology stand point. Something to consider if you are having an issue. BTW in a horse related theme….there are more and more concerns about the IUD version for mares – the marble.

I mentioned library books that I was reading in copious amounts this month. Here’s a list of books that I’ve read that I rated as 4 stars as better in GoodReader last month if you are interested. Most (all?) fiction, and none of them running or riding related.