Let’s talk about the Good, the Bad, the “Gear Used”.

(If you are looking for the ride story, I posted it yesterday here).

At the risk of inviting the gremlins to come throw a party at my house at my next event, I had the human care part of the equation FIGURED OUT for this ride. Ultras taught me how I had to organize in order to be efficient and effective during quick pit stops. Being ON MY GAME is what finally let me take control of my nutrition and be proactive about small issues.

I am a notoriously bad eater at endurance rides. I get really pukey and nauseous and eating usually makes me dry heave. 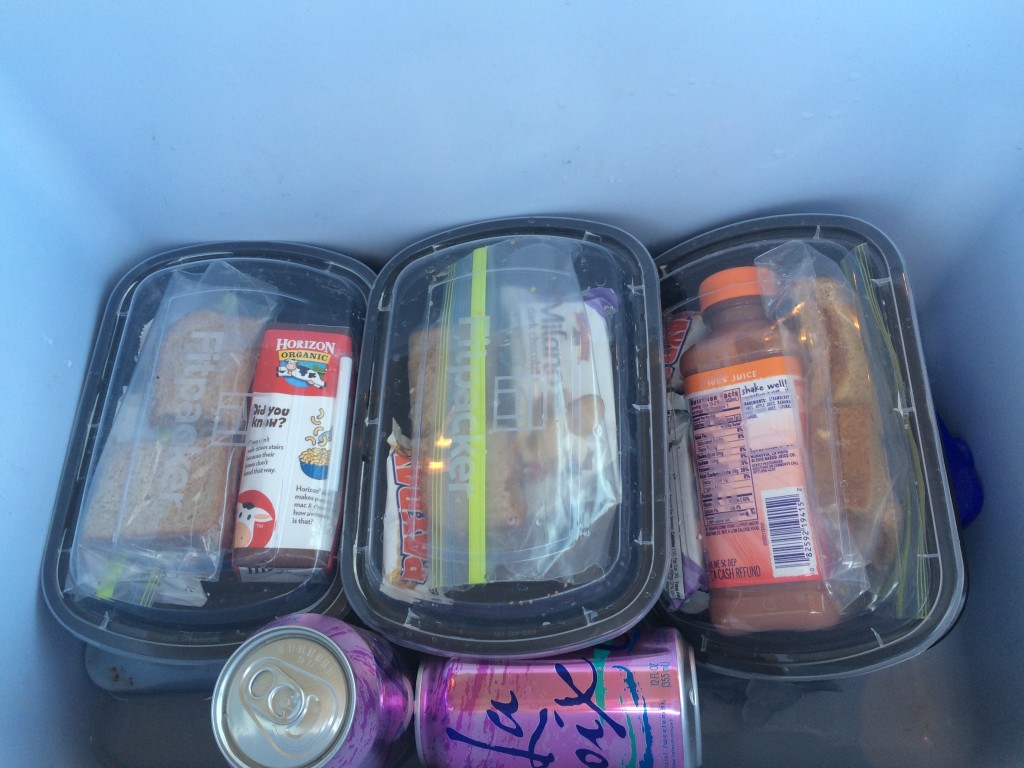 Ziplock no longer makes the divided containers I used to used in the past so I’ve switched to FitPacker (available from Amazon). I filled 4 or 5 of them with a “meal” and then grabbed one any time it was time to eat. Easy, visually appealing. The stuff in the containers was different from the food I was carrying on the trail to limit palate fatigue – and because it was camp with an ice chest, it was yummy food that wasn’t trail worthy. 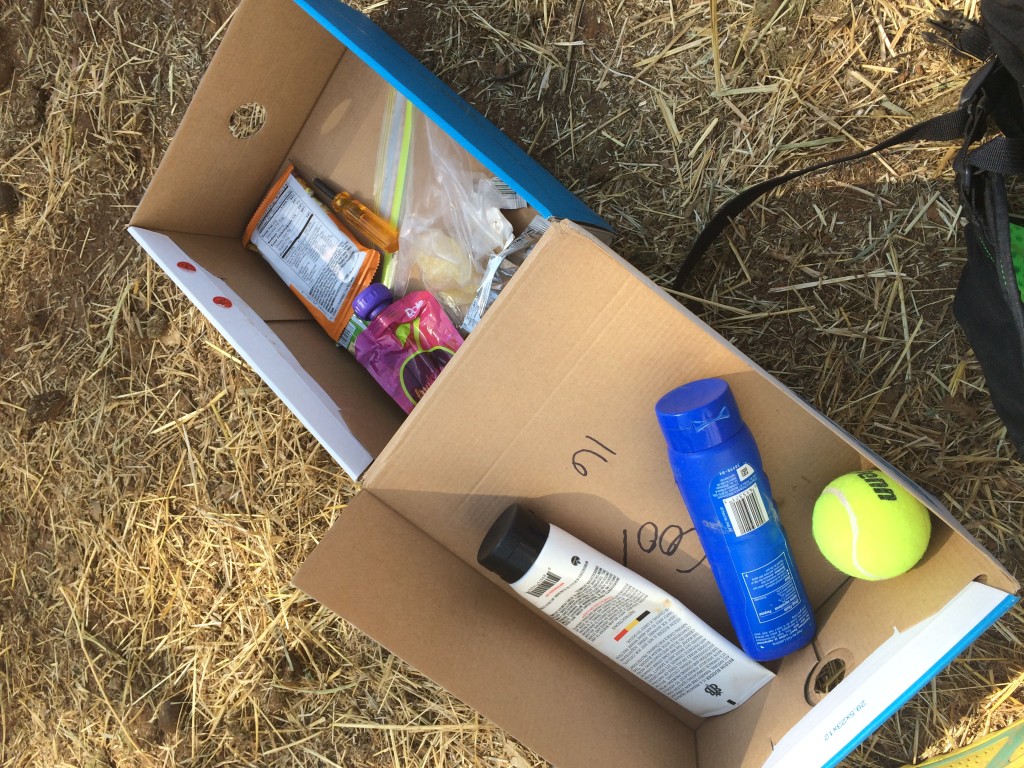 For trail food I filled a boot bag on the saddle and in my hydration pack with trail food. Ultras have allowed me to really dial in what food works on the trail for me. In camp I used my trusty shoe box drop container for easy access to refill trail food, and other “please use me!” items which need to be in my face in order to remember.

I know this seems like overkill but considering that for 10 years I’ve really struggled with refueling at rides and this was the FIRST ride I really felt like I was meeting my nutritional, hydration, and elyte needs while in the saddle. So I’m going to give myself a huge pat on the back right now.

The other place that organization really paid off was my “What if…” Bento box that is my go-to supplies for solving issues as they arise. 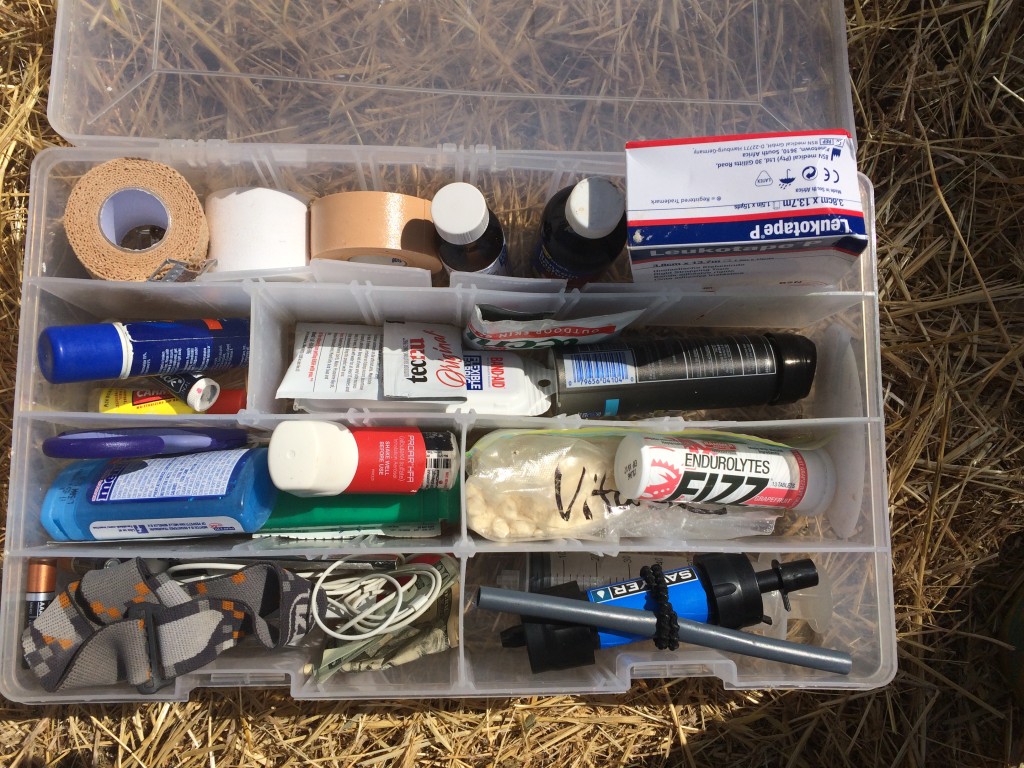 My full seat cover on my saddle is wearing out at the bottom of the fenders and I was starting to get chafing and bruising on the inside of my calves on the first loop. Addressing the issue was quick and easy because I had the supplies at hand, they were organized and easy to pick out of all my other supplies.

The continuing theme for me at rides and runs is that if it isn’t easy I won’t do it. I just have too many other things going on in my mental game to expend any extra thoughts.

I’m sharing how I taped my calves because the principles are similar to solving other issues like blisters and rubs in other areas. Duct tape and vetwrap can slip and actually cause secondary issues/rubbing/chafing. With a little pre planning with the right supplies you can fix it and forget about it. 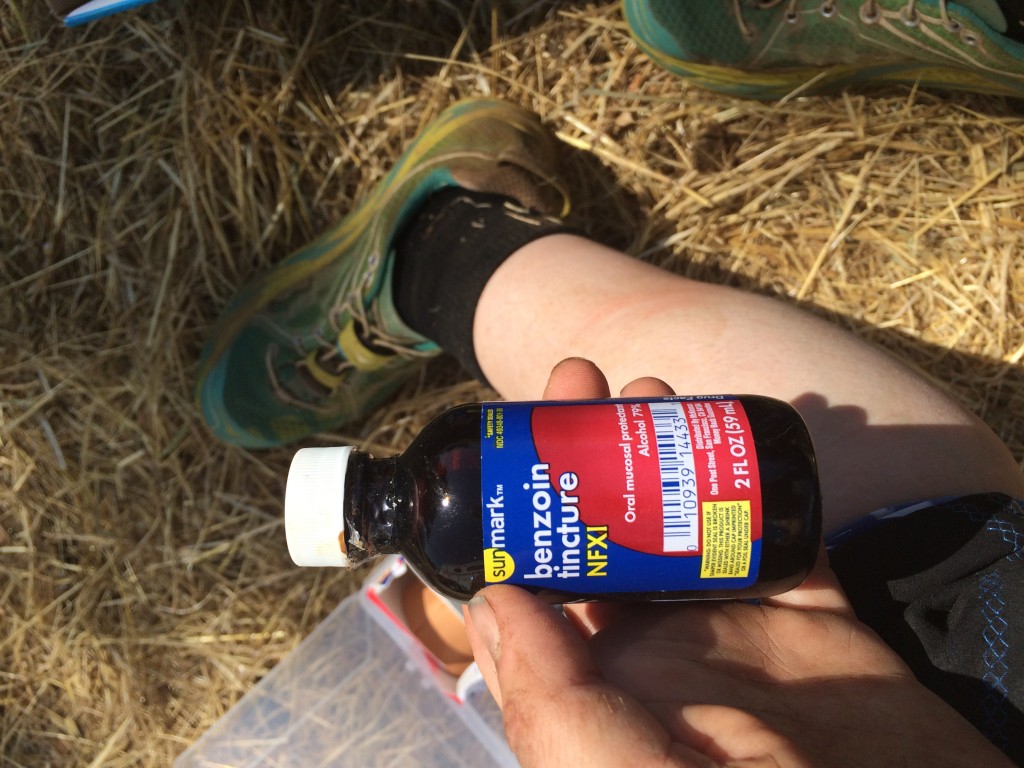 An adhesive promotor is super useful for making sure stuff stays on through friction and sweat. 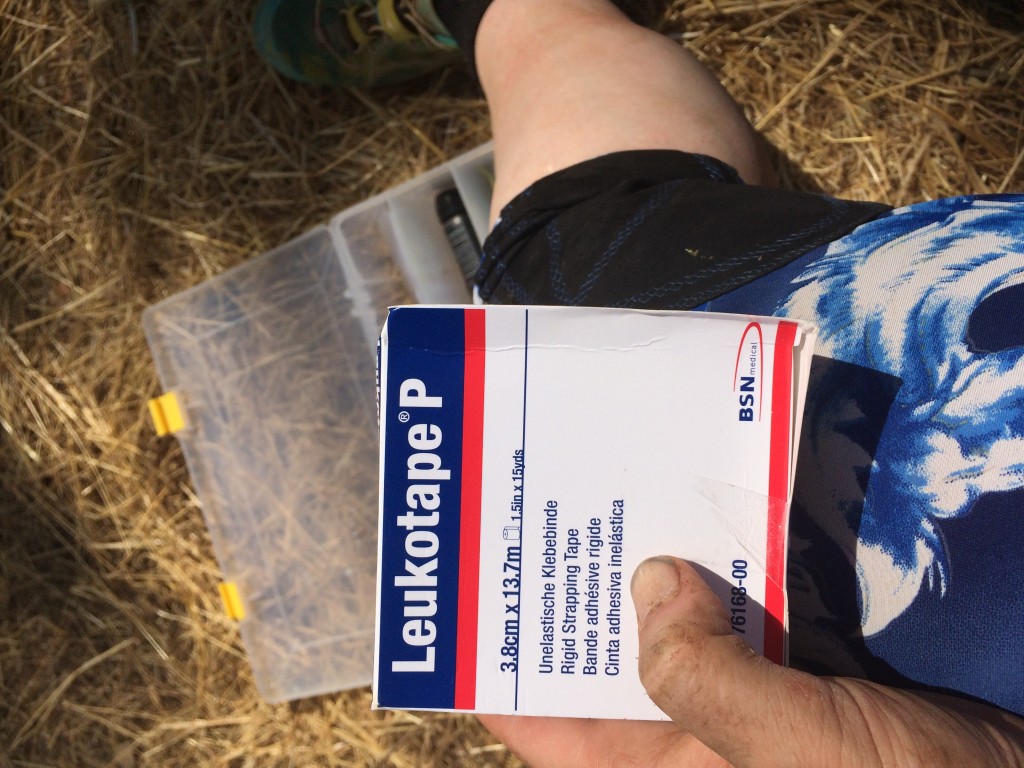 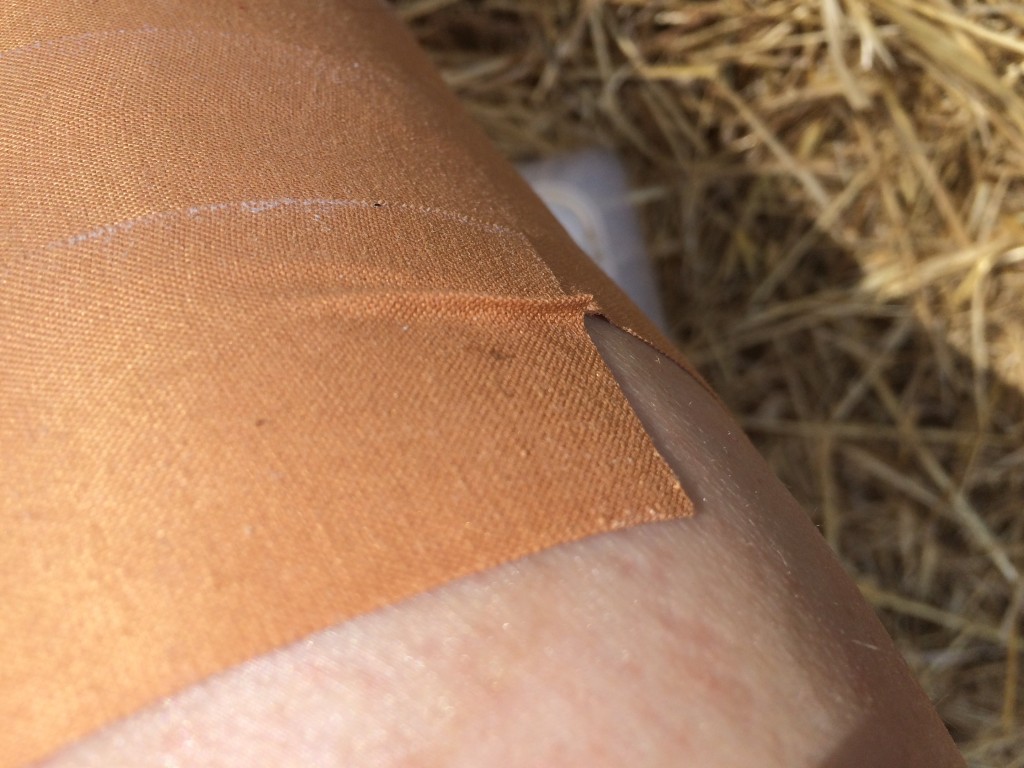 Apply promoter (ideally AROUND the blister or lesion and don’t just slather everything like I did. Taking the tape off will make the children cry if you do that. (true story…)and then apply tape. Depending on what you are doing, you may be wrapping a toe or around the ball of the foot. In this case I used strips over the inside of my calf. You will probably end up with wrinkles like this one as you conform it to the curves of your skin. 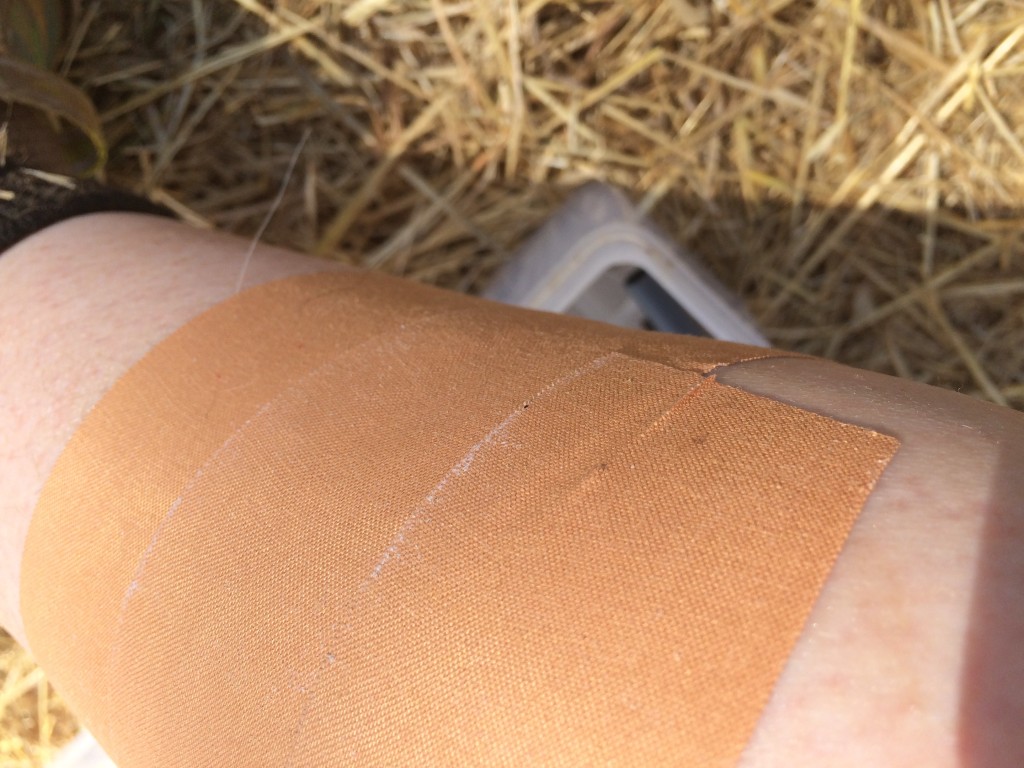 Take a pair of really sharp scissors and cut the “tent” of the fold off, leaving a little bit at the base to stick together. It should feel completely unnoticeable and flat on the skin now.

If anyone is interested in learning how to wrap various things here’s a really useful site – its focus is mostly foot blisters but the principles can be applied to many different things. This is one area where human and horse principles differ a bit.

2. I (mostly) problem solved instead of whined

3. I appreciated and rode every mile

It’s harder than it sounds. It’s easy to get caught up in what this ride means in the big picture and be so worried about getting miles for Tevis, or completing decade team, or getting the next mileage patch that you forget to enjoy *this* moment and *this* mile. I know because I’m guilty of that all the time. There’s no telling whether those things will ever happen. Goals are good and keep me focused. Focusing on process and not results to *me* means appreciation and enjoyment of  the miles and rides between here and there. And when that stops, I need to either find a different process or reevaluate my goals. I had a BLAST on this ride. Even when it hurt.

It was awful. I’ve never forgotten as much stuff for a ride as I did on that ride. Some of it can be blamed on some changes in my tack room and trailer – stuff that used to be stored in the tack room are now in the trailer and vice versa. It’s a constant battle between rodent damage risk, dust, space…and apparently adding to this list…”likelihood of me forgetting it at a ride”. I need to make a master list of the essentials, and I need to reassess where I’m keeping some supplies (especially now that I have a new trailer with a bigger tack room – WHOO HOO! Just bought trailer last night, pics and details SOON I promise).

Riding 50 miles is a lot different from running it, and since I started doing Ultras I’ve maintained that running the distance on my own two feet is vastly easier physically than riding it.

I stand by that.

I rode most of the first 25 mile loop. The only reason I survived the ride is because I ran most of the second 25 miles. My legs had so much muscle fatigue at the lunch stop that when sitting, if I put the ball of my foot on the ground while lifting up my heel, my entire leg shook uncontrollably from fatigue.

It was that bad.

I think the *IT band pain was probably secondary to the muscle fatigue (which is a different root cause than what happened at Pioneer a couple weeks ago). Stirrups that were too short the first loop may have played a factor, but that wasn’t the whole story.

*a band of tissue that runs on the side of your leg from your hip to your ankle. You can have pain anywhere along it, my pain manifests where it passes by the knee.

I got through the ride based on my running fitness which once again proves that #8 really is true.

Would I ever tell someone to go to a ride and just assume that the same size boot that fit a year (2?) ago fits now?

Is that exactly what I did?

I haven’t used hind boots in a while – I use fronts conditioning and for rides I’ve been gluing on hinds. But this ride was going to be low-key enough I didn’t mind doing strap on hind boots so I grabbed 2 from my inventory (that I’m trying to sell BTW – if anyone needs some used renegades let me know!). 3 size 1’s. Because options are for wussie’s right?

I’m just dang lucky that I got by with no hind boots and it didn’t bite me in the ass a la Gold Rush Shuffle where I had problems with the hinds early in the ride, decided to not wear them, and then GOT PULLED FOR A ROCK BRUISE LAME on the hind. 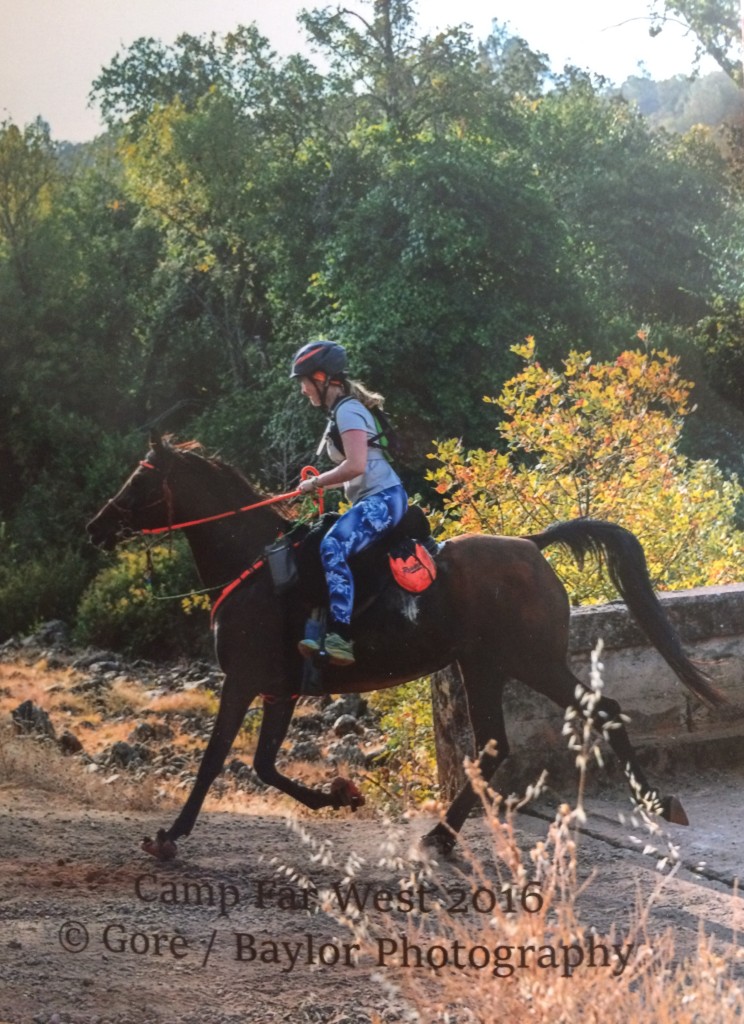 I’ll make the same offer that I do after every event analysis – submit your questions and I’ll answer them. No question too small, too stupid, or too “greenbean”. If you are wondering it, I’ll answer it. Email, pm, or post a comment here and I’ll do a post with the answers in ~1 week. If there’s no questions (like Pioneer) I’ll move on!