Howdy July! I guess summer is finally and truly here. I invite you to sit back with a long island ice tea and enjoy what I’ve been reading over the last month.

Like anything else breed bashing (or praising) is done on generalities of the population, doesn’t apply to individuals, and is usually highly dependent on personal anecdotes. That being said….while I won’t go out of my way to make any one feel bad about their chosen breed, my least fav horse breed? Stock horses in general (QH, paints etc), thoroughbreds.

Yet another article that discusses the impact of practice on performance. I’ll always struggle to run 100’s in under 24 hours no matter how many hill repeats I do. Farley would have probably completed 100’s in the hand of any idiot. (Here’s an article I wrote in April about the 10k hour rule and what kind of practice may make the biggest different)

I have such a hard time getting inspired to do any sort of weight/strength training. I’ve been using 2 websites this month with good results. The “Fuzzy 50” I found on this site has been my go-to strength training for the last couple weeks (and there’s plenty more when that one loses its appeal), and I’ve been using Darebee for their daily challenge (if it’s lower body I can totally nail it with “extra credit”, but upper body?  ummm….) and for my every other day core work.

I know it’s not “in style” any more, but I still do some of my runs barefoot. I was barefoot most of my childhood and did a lot of running barefoot. As an adult I did all my runs in shoes but was still barefoot for a lot of my every day life. I transition to barefoot running in 2011 and it changed my running for the better. I’ve never had an injury from it – but with good biomechanics, a LOT of barefoot unofficial miles, and a very gradual introduction to running (and beefing up my shoes as needed when the distances got longer and longer) I’m probably not the typical story. It’s been very difficult to find shoes that work as my mileage gets longer. I need/want lots of cushion for rocky distances of over a marathon and those tend to come with a bigger drop, too narrow toe box, too much arch support, not enough instep room. However I credit my foot and biomechanical health, as well as running faster and longer and better with running with “just” enough shoe for each run and distance. For very long distances or technical trails I go with as much cushioning as I need (Hoka, trying out a Brooks Glycerin soon), but most of my treadmill work inside is done barefoot and a lot of my short runs around the neighborhood are in moccasins, Merrell’s Vapor, or even an unshoe sandal. 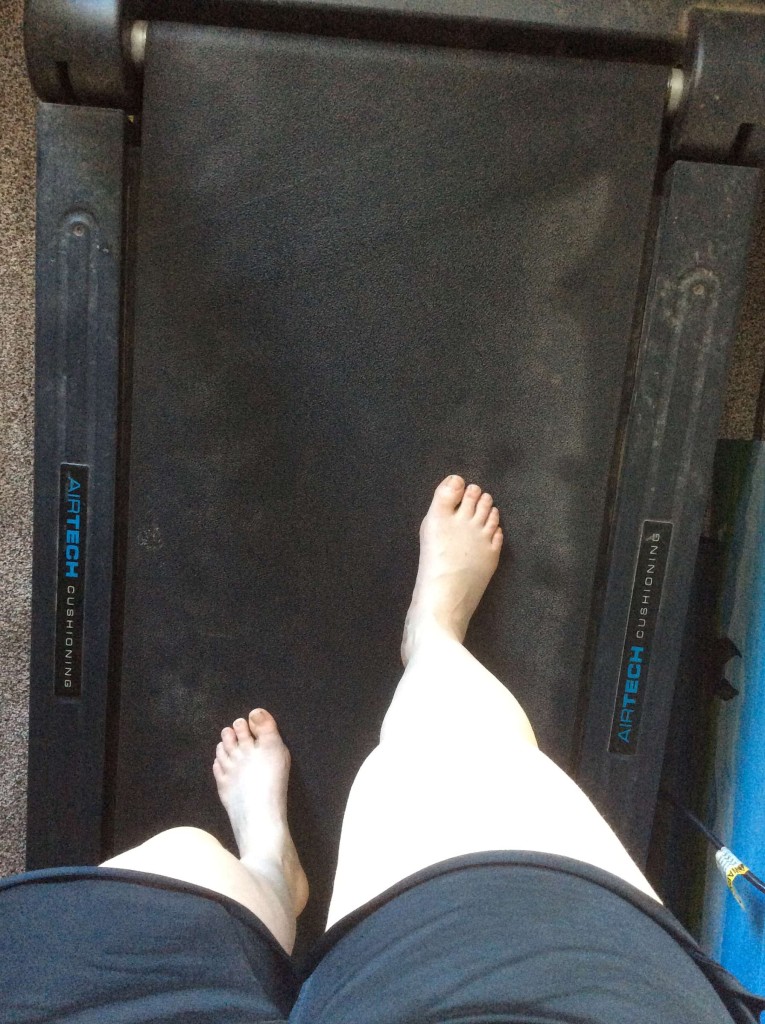 Walking on my tread-desk while writing blog posts. *The difference between a “hill-o-matic” and “tread-desk” is whether a board has been placed across the arms for a computer!

I know friends who feel this way about endurance and horses. Heck, *I* might even be headed that direction. Although marking the Tevis trail is going to require a substantial bit of pre-riding on Farley and that is getting me all excited and motivated, so we shall see? (on the other hand, before I decide on any “new” feelings on ANYTHING I just try to remind myself that it hasn’t been long enough since graduation/baby/house to really know what I feel about ANYTHING. Including the conure living on the back patio that I currently want to strangle several times a week. )

An excellent blog post that highlights many important aspects of preparing for a 50 or 100 mile endurance ride.

Funny cartoon on quirky rider types. I could totally do an endurance rider one. Add it to the 60+ blog drafts I currently have…

I make a real effort to avoid commenting on appearances as it relates to physical characteristics. Online or in person. As someone who does not fit the stereotypical version of a female distance runner, I have my own thoughts to contend with just based on images and comments not directed *at me*. How horrible to add the commentary that some elite female athletes have to contend with. I saw a comment once that the “successful” athlete women’s body type varies a lot more than the male athlete, and I hang onto that when contemplating the wonderful things my body can do on a not-size-0 frame. I don’t have an opinion on the “can fit be fat?” discussion, mostly because I’m too busy trying to do my thing over here and achieve my goals and think everyone should mind their own damn business, however I do think it’s interesting that usually the person in question is female, not male.

On a similar subject, found this photo essay really interesting. Generic pic of women sent to various countries for photoshopping into ideal…..go!

Some good tips on staying safe, not necessarily just for the women. I do most (all?) of my training runs solo and most of my training rides. I probably have a bigger chance of being eaten by a mountain lion  am running scared from rustles in the bushes because of *that* possibility than the human kind of nastiness.  (or practicing my sprints getting away from all the damn loose dogs in certain neighborhoods. You can talk about the pit bull/chihuahua bite issue all you want, but not until you spend an afternoon running with me wondering how many times you are going to get charged at by the at-loose-mostly-pits-or-chihuahuas over a three-hour run, then you can tell me how Chihuahuas really are the bigger threat).

Really really cool research that just goes to show we don’t have it all figured out. Serotonin, dopamine are buzz words we’ve heard for years when talking about depression, medications that treat it, and why running may work to combat it. But now there’s evidence that the other thing that medications and running may have in common is building new neurons.

Jessica, the women featured in this article is one of my childhood friends. Pretty awesome article on women in another extreme sport – jousting.

Even though the WS100 and Tevis trail differ slightly, I still think that a Google street view of the trail is the coolest thing EVER. Here’s the overview of the project and here’s one of the updates that I saw when the project was still ongoing.

Speaking of Google street views, here’s a rather unfortunate horse/rider meeting captured on it.

The only cooler than a Google street maps view of the trail might be this: 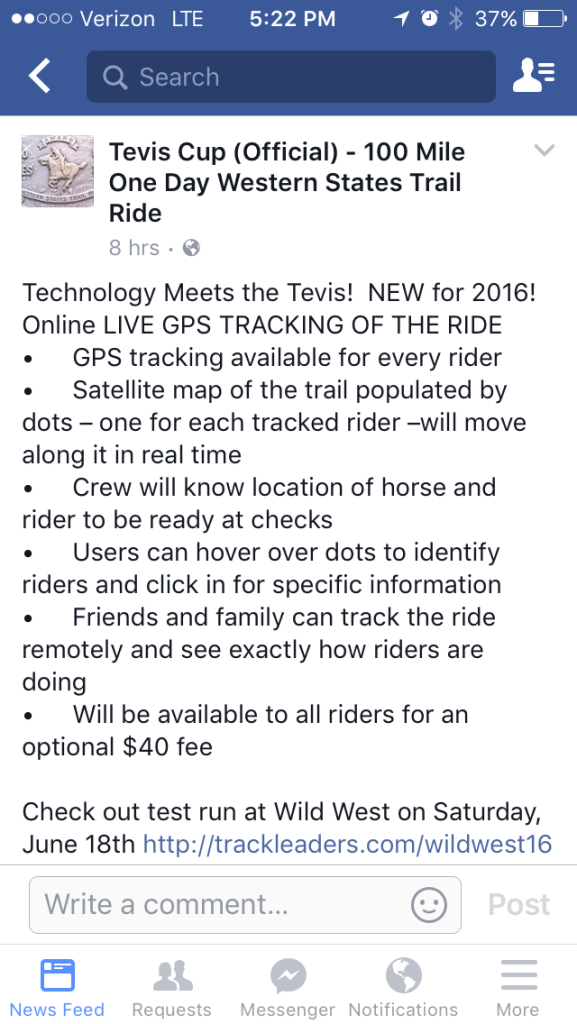 I wasn’t that interested in the Olympic doping scandal until I saw this video. BWAHAHAHAHAHA. Funniest thing ever. I feel fully informed now. How about you?

Couldn’t agree more with Dr. Ramey and his observations of “clinical relevance”. However there of 2 problems with it: 1. In a small percentage of cases complications do occur that could have been prevented by more aggressive treatment. Being a vet I see those complicated cases as a higher percentage than they truly are, which makes me more cautious about recommending just the cold hosing treatment. 2. Because I *do* subscribe to this philosophy and tend to recommend more conservative, “clinically” relevant treatment, I am a lower grossing vet in the practice, who isn’t motivated to change just because of the numbers. *sigh*.

We’ve talked about first aid kits here before, and even though I’m not a fan of most “kits”, these look pretty good! Check it out if you are looking to add a first aid kit to your life.

Wow. Makes me look at that dusty fan in the garage in a different light…..

Has everyone seen this story yet?

Ugh. Hate stories like this. Older female hiker dies on Appalachian trail after surviving for weeks and leaving good-bye messages for her husband. :*(

The last couple paragraphs of this article sums up why I ride and long run distances. Empowerment. Because there’s a choice. And (most) of the time I choose to be a bad ass and keep going.

My fascination with willpower, mental fatigue and it’s contribution to endurance events continues. From this article: “So the simple headline here is that short, intense efforts produce greater fatigue in your muscles, while longer, sustained efforts produce greater central fatigue in your brain and central nervous system.” (although the next sentence says it’s not that simple, so maybe you should read the article).

Like most Barkley marathon reports, this is best enjoyed if you know something of the event….I suggest watching “The Barkley Marathons” on Netflicks!

I’m out of time this morning so pictures of Fig and other non-endurance related adventures will have to wait until the PS note on the IRL post coming up soon!