Except for Black Canyon, I feel like February was a complete waste of my time (except some how I’m still going to manage to write 1600 words about it…). Being evacuated, evacuating Farley, a 10 day rest period after Black Canyon, it rained all the time, and a surprise 5-figure tax bill.

Go ahead, ask me how much money there is for my running and riding plans this year, or really anything else. NONE. That’s how much. NONE. Thank God running is relatively inexpensive and I have enough shoes for a while, and when it comes to the horses and endurance all the important bits (heh) have been bought and paid for throughout the years.

Figures. The year I put my intentions down in writing is the the year it never stops raining and everything goes to hell. Ah well. It wouldn’t be endurance without a little edge-of-your-seat excitement right?

The stats are not terrible impressive. 70.8 miles over 3 runs. Black Canyon 100k completed under 17 hours. I started this month with ~4 mile run that was my first back from being sick. I managed another 4 mile run and then all hell broke loose. I was evacuated and then before I could blink it was time to go running in the desert. My rule of thumb is no running for 1 day off for every 10 miles post race, or if it’s a hilly race (150-200 feet or more elevation change per mile) 1 day off for every 10k. So for the last 10 days of the month I didn’t run and instead contemplated my planned running season (more on that later). 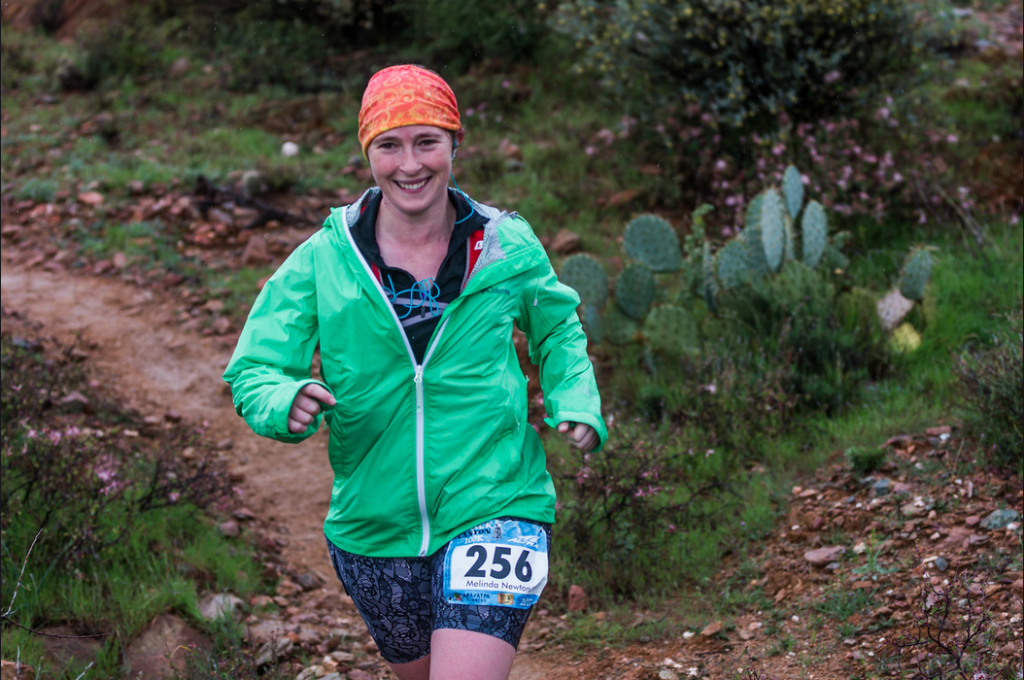 Sweet M Images did the photography for the event and did such a good job. I’m considering purchasing one of these 2 – what do you guys think? Which one do you like better? Might be kind of fun to have a picture from each of my WS100 qualifiers to show off once I finally get in.

This is a good time to discuss just how much running did not occur between my 100 miler at the beginning of November and the mudfest 100k mid- February. I did a similar breakdown after my 100 miler for the entire year of training leading up to that race.

November – 100 miles in the first week. 2 easy runs of under 5 miles each. From December to February 18th, this is what my training runs looked like:

I would have had more runs despite the evacuation (which occurred during my taper fortunately) except for a kidney infection in late December and a cold in the latter part of January. 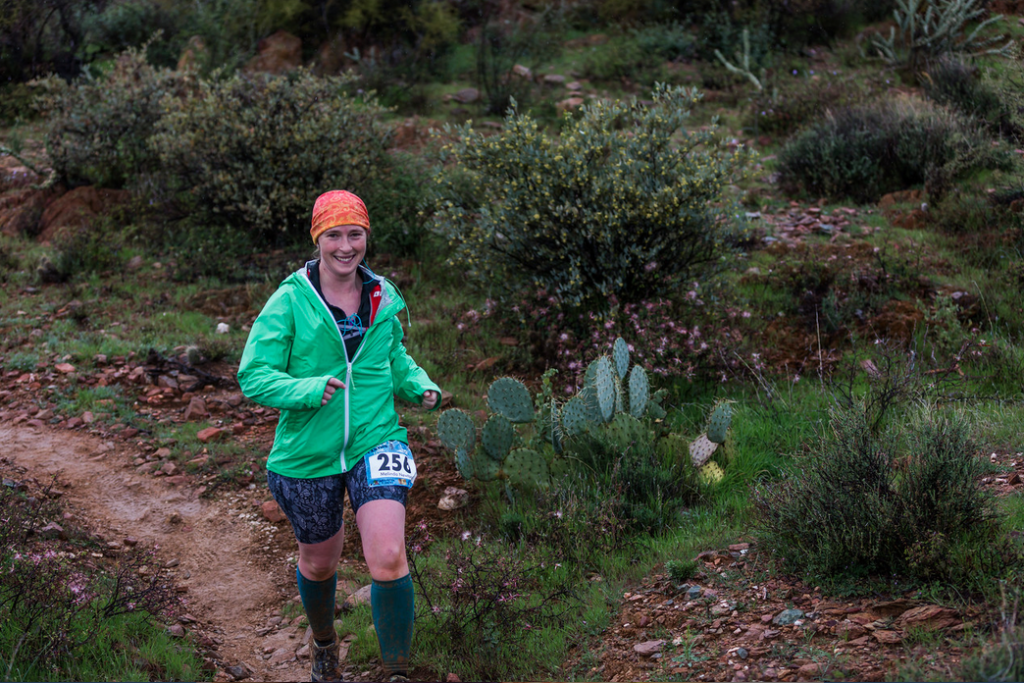 Only in an ultra do the photographers take the pictures after you have run at least a marathon! And still not even half way done….

Despite feeling undertrained and underprepared for the 100K (even more so than I did at Rio if that’s even possible) I had a great race in sub-optimal conditions.

LESS IS MORE folks.  Less is more. We don’t need to do half the crap we think we need to do, and we probably need to do double of the stuff we aren’t doing. 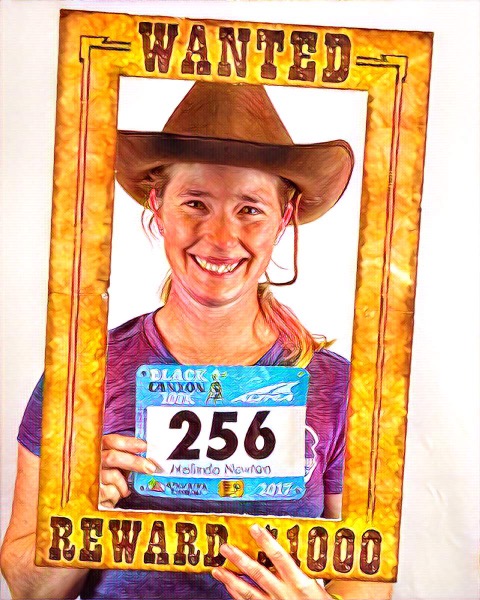 I absolutely adore this picture. The original was taken by Sweet M images as well and for once I wasn’t stuffy and grumpy during photos and actually was a little silly. So worth it.

I realized during my 100k that I don’t really want the Stagecoach 100 mile race this year bad enough to step up to the start line. There is an excellent quote out there (that of course I can neither find, nor remember verbatim) that says you should never start a 100 that you aren’t 100% committed to finishing. Nothing less will get you to the finish line.

As I was running the 100k I felt the immensity of how incredibly selfish and “high cost” the event was. I flew away from the family for 3 days after an incredibly stressful week and things still being extremely unsettled to run for 16 1/2 hours in the desert and hang out with friends. It’s OK to do selfish things – stay with me as I explain what I mean. Initially Black Canyon wasn’t *suppose* to have *that* high of a cost to the family. A quick weekend for me to go out and get my qualifier done and then be able to focus on the rest of my season. Unfortunately due to sucky timing it didn’t happen that way, and in the end when me and my husband discussed whether I should do it, we decided that the race was important enough to me to do it, so I did and he supported me 100%. But now it just seemed terribly unfair and uncool to ask my family to plan our yearly vacation around another big event that was about me (again). This feeling is so strong that I believe it will prevent me from being 100% committed to the finish line.

The middle of 100k’s are not the time to make decisions about an upcoming 100 miler so I promised myself I would revisit it later after the race, but my feelings haven’t changed over the last 2 weeks so I’m ready to strike Stagecoach off my race calendar for this season.

When I think about the upcoming runs I have planned the only one I’m SUPER excited about is the Ohlone 50k. So, that one stays on the list for sure, and if I end up getting into the Tahoe 50 (waitlisted #34) I’ll run that one with joy too. The risk I’m taking is that I’ll get into WS100 this December and have to run that course with only one 100 under my belt. If that happens I’m still 100% sure I can reach the finish line if a finish is in the cards for me that year. I’m becoming more and more confident in my ability to “get it done” and being local to the course is a huge advantage in my training.

She now has a turn around the forehand from the saddle!!!!! Tada!!!!!!!  She yields her hindquarters with leg pressure. AMAZING.

So…..it took me this long to figure out that she doesn’t have “lateral” because she had no idea how to do this little move under saddle. On the ground, yes. With me on her back, no.

Of course, as she whipped her hindquarters around the other day and *almost* unseated me doing so I did wonder whether improving her “athleticism” was a great idea????

She also got her teeth floated, and in a move that proved to myself I am (sometimes) a BAMF I got my truck AND trailer unstuck from a mud ALL BY MYSELF. And was on time to pick Fig up from day care (priorities). It only took me 1 1/2 hours. And of course I got it stuck in such a way I *had* to move the trailer and truck in order to drop the trailer so I could get the truck out…and of course once I got the truck out, I went back in from another angle to pick up the trailer and again because I couldn’t just *leave* it there. It was a bad spot. And then got the trailer unstuck without getting the truck stuck and again and so like I said. BAMF right here. (and as usual I got myself 80% out of the jam, but panicked and called my husband because it’s always darkest before dawn which ALWAYS HAPPENS AND SO I CAN NEVER KEEP THESE THINGS SECRET).

At the beginning of February I really thought we had a shot at Rides of March (in 3 weeks). With her being out of town for half the month, that is a big fat no. :(. As is a 100 at the VET ride, Cache creek due to a family conflict. Whelp. There goes my “planned” 2017 season.

As for Tevis, my line of thinking has been going the same direction as the Stagecoach 100 miler described above. I just don’t want it badly enough. You know what would be a completely awesome, bucket-list, LETS DO THIS event? Virginia City 100. Which is now doable thanks to Stagecoach 100 being off the table (both events are in September). It’s cheaper than Tevis, comes with more swag, it’s a new trail I’ve never seen, I’m being assured that it’s doable for me and Farley, it’s WAY EASIER logistically, and the number one thing that stresses me out about Tevis (the hoards of people who don’t have a clue) are minimized…not to mention all my friends will be there. And for some reason mid September 100 seems like way more time for training than an early August.

Sounds pretty darn good to me!  Let’s put it on list!

Emphasis will be keeping her sound for VC100. I’m not sure what our schedule is this spring because every time I try to plan it out my brain freezes and I end up staring at the wall like a demented bunny rabbit – probably a sign of not enough pony time and too much stress – which hopefully will be improving in the next week or two.

…Was at Mare Camp all month!  Considering bringing her home next week for some fun and games.