Nailed it failed it…but without the cakes or Nicole. Let’s do my favorite post-event analysis. Choose the three best and worst things so that (theoretically) lessons are learned and stupidity is not repeated. 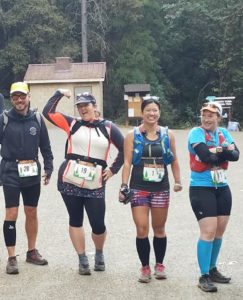 …I think? Basically I took as many as I felt like I needed, as often as I thought I needed it and that ended up being about 3-4 per hour of the hammer endurolyte capsules, but sometimes it was more, especially in the middle of the day when I was working hard. These work really well for me and the ginger in the capsules makes a huge difference.

It felt like a massive amount of electrolytes. I know from experience my electrolyte needs tend to be high (which is weird since my every day diet is low in salt?), and when you consider that my number one preferred fuel during races – applesauce – has rather low amounts of sodium, this makes since that I would need to supplement. I guess?

The last couple of long training runs and races I’ve gotten sloppy about my electrolytes so, as this was likely my last trial before heading to Rio, I was very thoughtful about eating, electrolytes, and how I was feeling. Every thirty minutes if I felt fine I would take one capsule. If my muscles were tight or felt crampy, I popped 2 capsules. Usually I needed alternating 1 and 2 capsule doses every 30 minutes, but in the middle of the day I found myself popping 2 capsules in fast succession to keep on top of what felt like electrolyte depletion.

The capsules were my only electrolyte supplementation during the race because I didn’t care for the type of electrolyte drink they offered, and I was too lazy to mix the ones I brought (more on that later).

Reading the label, two capsules is the dose for my bodyweight and the recommendation is one dose every 30-60 minutes, so perhaps what I was taking wasn’t completely out of line for what I was doing?

It just felt like a LOT while I was on the trail. But…I continued to feel good for most of the run. Muscle soreness and tightness that usually would have attributed to needing to take an NSAID would disappear after a 2 capsule dose. *shrug* Despite feeling like I was pickling myself, maybe that’s what I needed?

Unfortunately I did NOT bring 30+ tablets with me to the race so I ended up using some of the salt tabs that were provided at the aid station. They definitely affected my stomach in a different way than the Hammer caps and I had to be more careful.

I am looking into getting some of the Endurolyte Extreme tabs from Hammer that are more concentrated. During the heat of the day I would prefer to take that rather than multiple endurolyte tabs.

Getting through a race without NSAIDs is a huge win for me. They’ve become my crutch in the last couple of years and I’m not sure why. I think it’s easier to just pop some NSAIDs than really problem solve what is going on and how to fix it.

I got lost so my calculated race pace time doesn’t reflect my actual pace, which was a 18 min/mile average overall (including stops, aid stations etc.). It was a really slow race for everyone. What matters to me more was how I paced the race. I was very conservative in the beginning, worked hard all day, and still had gas in the tank at the end to bomb down a hill and maintain a sub 15 min/mile pace into the finish over technical ground. I stopped several times on the course, usually for a minute or less, when the going got really tough and it enhanced my race rather than making it harder. I’m a believer in relentless forward progress so STOPPING and SITTING is a brand new thing for me. However, I moved so much better and faster after those breaks that I feel they were totally worth while and actually made me faster overall. One more tool to add to my tool chest.

I really love using the smart wool arm sleeves to help me regulate temperature on cooler days. the fact I can roll them down or up as needed, or remove them and stash something the size of pair of socks in my pack without having to remove my pack is awesome. I cannot recommend them highly enough. Not being too hot or too cold is really important to me when I run. It’s not a matter of being tough, it’s a matter of wasted energy. Getting the layering thing RIGHT is so dang important. 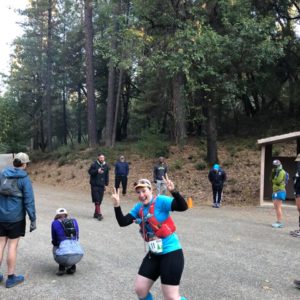 I can’t help myself. Friend takes a picture…I jump out in front.

Beyond the obvious got lost…..

I get so sick of sweet stuff, and there’s only so many potato chips you can eat. This race didn’t offer any cut up sandwiches and while trail mix and oreos do an OK job, I was really craving something savory and substantial for the last couple hours of the race.

Some of the best advice I heard on a podcast was an elite runner recommending that aid station food be used as supplementation only. Most of the nutrition you consume should be pre-planned and packed by yours truly. It was after following this advice that my bonks become much less severe in races.

One factor for this race was the lack of a drop bag. For 10 hours I had to rely on what the aid stations and what I had managed to fit into my vets at the race start.. Only so much food fits in my vest and by the end of the race most of why home-brought options had been consumed.

I tried a friend’s Trader Joe’s Turkey Jerky on a run recently and it was surprisingly palatable when running so I may try that option. I’ve also heard that uncrustables offers a mini-sized sandwich now that might be a good choice (the regular ones are a little too big for an on the move-refuel). Any other ideas for portable real food savory options when you are craving a quesadilla, sandwich, or noodle soup but that’s not the type of things the aid station is offering?

Pouring powder into bottles is so hard

I have pre-measured quantities of various things in little ziplocks that are meant to be poured into a water bottle, have water added, and then be drank. Actually consuming these things would be very helpful for me during the race. Am I actually able to make this happen? No.

I have no idea how to make this any easier than it already is. Narrow ziplocks. Premeasured. Wild mouth bottles. What am I waiting for? a f*cking invitation? Why can’t I make myself do this? Hand packet and bottle to a nice volunteer and ask them to dump and fill and hand back go me. WHY IS THIS SO HARD. Do I need a dedicated hand bottle for my “mixed” drinks? The soft flasks are kind of annoying. Do I need to stash bottles with magic-powder in them in various drop bags and with my crew to hand to me?

I dunno. This is a major weakness for me right now. Ideas?

Rio Del Lago 100 miler of course! A little more than three weeks away. My prediction is that it’s going to be a challenging weather year, which always makes me want to curl up on the couch and pretend I’m actually not going to run a 100 in anything less than perfect weather, but the truth is in nasty weather I tend to PR. So I can’t decide whether to hope for the best or the worst?

My gear is dialed in.

I’m continuing to up my end game. A change of clothes and a packet of baby wipes, even if I don’t use them, is such a luxury. Now I’m discovering the joys of an ice chest filled with cold beverages and snacks. It’s such a pleasure to pamper myself a bit at the end of a big run.

My plan is to run the 19 mile mostly pavement loop again as a training run in the next 10 days if at all possible. My schedule is getting really tight again so we shall see. Then it will be time to see if I made the right training choices and if I can get this thing done. Rio and I are matched 1 to 1 right now in the best out of 3!

7 Responses to Nailed it, Failed it Yuba Gold Edition