I have this thing where I don’t realize I’m not OK until I get the thing back that was making everything OK that I didn’t realize was making it OK.

My not-OK-ness usually manifests by me collapsing on the couch in the evenings, too apathetic to do anything important to me. Mind you, I don’t realize at the time that I’m not OK. I usually just feel like a failure for not being able to make myself do the things that last week I had no problem doing. Dinner becomes a chore, rather than an enjoyable family process. I can’t find the ambition to write despite having a bazillion notes on good topics.  Exercising and taking showers become are insurmountable challenges. Reading a book or staying focused on anything is impossible.

Things look pretty normal from the outside because I’m still doing all the things you would expect a functional adult to do. I go to work where I am personable and energetic. The bills are paid and the pantry is stocked. My emails and messages get answered. I can usually dredge up the energy to complete my big projects and commitments.

I just didn’t realize it until I’m okay again.

Does that make sense?

This week I got child care back after Fig’s day care was closed for two weeks (no actual covid exposure, just an abundance of caution, which I 100% supported).

Was it coincidence that today, after weeks of feeling like a shadow of myself, I rode my bike outside in the daylight hours after getting off work? AND then took Fig for a walk. AND then made a coconut ride with tempered pineapple dessert. AND then realized I could sit down and write a blog post too?

Tonight I realized something. Today is the second day that day care is open since the latest closure.

*No, I’m absolutely not teaching her how to work an anesthesia machine, dump things on my pack sterilely, take post surgery temps, or cleaning up my instruments post surgery. She is also not earning token awards towards toy purchases by unpacking syringes for me….nope nope nope. That’s my story and I’m sticking to it.

Day care. The thing that makes everything else doable and manageable right now.

In retrospect I can see the unraveling that was occurring a week into no child care if I look at the activity app on my phone. It’s a small thing, but look at my activity rings. 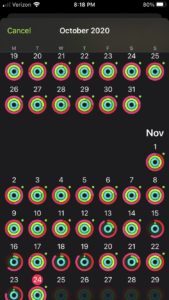 Notice how all the rings are completed, day after day? Until mid Nov….

Look. The rings don’t matter. But it’s interesting how they closely mirrored a larger problem that was happening. It’s like showering. Not showering isn’t the problem. It is what it means when I stop caring enough to take a shower.

It’s funny how the body doesn’t lie, even though the brain might be doing it’s very best to hide the ugly truth. Whether I realized it consciously or not, the stress of one more thing was causing cracks. Closing my rings isn’t really a big deal and usually occurs without me trying. Except suddenly  I couldn’t do it and I didn’t know what happened. I just felt was failing at things that were important to me and I thought it was my fault for falling short.

Fig is a good kid, but 8-9 hours of surgery together is a long day for both of us.

I believe all of us are to the edge this year.. Maybe it isn’t childcare. Maybe it’s an elderly relative that isn’t doing well, or a difference in politics that has your once rock-steady relationship on the rocks. I’m here to tell you….it’s not just you. It’s all of us. Even when it looks okay from the outside, we are all just  one thing away from an unraveling.

But guess what? It’s going to be okay.

It turns out I’m not broken, it was an external circumstance that was temporary. Chances are it’s going to happen again, but maybe I’ll be able to be proactive next time. I can’t put a new roof on my life right now, but next time maybe I’ll see the storm coming and put the buckets out to catch the water coming through the leaks, instead of just throwing towels on the whole disaster and hoping it stops before the sheet rock gets wet.

I can breathe again. And bike. And run. And write. And maybe even read a book until I fall asleep tonight.

Fig has two working parents, both with professional jobs who have a lot of stressors in 2020, but none quite so insidious as the periodic lack of working hours child care.

It’s not that we can’t make it work. We do. But here’s the thing that pisses me off.  You wouldn’t believe how often I get to hear from all sorts of people that the fact one of us isn’t staying home with her  is the “problem with society,” and we just need to make it work with one working parent. In fact, (so I’ve been told multiple times by people who don’t currently have underaged kids) Covid just may be the blessing in disguise, as all of us parents are forced into spending more time with our children!

I literally want to punch every person that tells me this. But instead I smile sweetly and say…..

You know what? Fix the health care system so that my health care is no longer dependent on one of the partners’ being in the “right” job, and fix the federal student loan fiasco that has basically guaranteed that class mobility remains a myth, and then we can discuss how a set of parents chooses to balance child raising and a professional career, and then have a lively argument about whether it’s solely the parent’s job to raise the children, or if that project has been a community effort since the beginning of time.

….and then they look at me as if I’m the serpent that ratted out Eve. And then sometimes ask me to do them a veterinary favor. On my own time. For free.

I am not making this up.

This is why I have to write about it and laugh, because the other choice is to turn into a bitter old lady and threaten people with sharp sticks if they try to make me take showers when all I really want to do is lay on the couch and cuddle kittens.

Which is easy to do when you have the attention span of a squirrel. It turns out that my ADHD gets really bad when I have to pretend “it’s all ok” and am not able to do restorative self care because the cracks are showing and there’s just nothing left over at the end of the day. 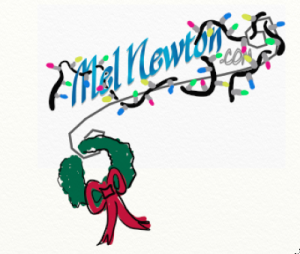