The coach managed to catch me on one of my low points at a 3 day swim camp last weekend. She gave me the magic button for swimming that I didn’t know I needed.

During a run my reset is walking. When my breathing feels out of control and my brain starts shouting “are you CRAZY????” all I have to do is walk. In 30-60 seconds I’m ready to go again, the demons on my shoulder quashed and the feel good endorphins flowing.

Every sport I do has a reset. Floating in a kayak, sitting down when backpacking, gearing down on a bike…..all the activities have a lesser version of themselves….except swimming.

Until now one of my greatest struggles in open water swim is that I only have two speeds. “Survival,” which is moving hands and legs with sometimes-coordinated breaths that is sometimes referred (rather optimistically in my case) as the freestyle stroke…..and “Survival Part 2,” which is gripping my safety buoy to my chest as I bob in the water and pant heavily with no forward progress.

But now….there’s something between the two.

“I’m not going anywhere, everything feels wrong, and because I feel like a whiney emotional toddler over this I probably need a nap and a snack,” I wailed and sobbed to the coach (except the last part. That I only figured out after I got out of the water and realized how sore I was after 2 straight days of swimming. I was hungry and tired. No wonder a one mile open water swim at the end of the second day felt so crappy. )

Her answer? Stop using your legs.

Just float on top of the water on your belly and pull with your arms. Don’t kick, or just let them do a natural little tiny flutter with the motion of my arms. Do less instead of more when your brain isn’t functioning.

Especially in a full wet suit, floating on top of the water is easy. Moving across the surface of open water like this without using the legs feels a lot like a pull buoy drill in the pool, where you hold a piece of foam between your thighs and just swim using your arms. 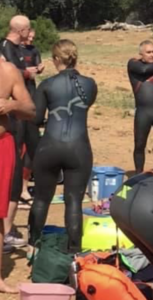 Because our brains are epically bad at multi-tasking, when the legs are removed and the brain can just focus on the arm stroke, the arm stroke will improve and become more efficient (at least when you are a beginner swimmer like me). Not to mention the oxygen requirement for the activity goes down because you have removed some very large, energy costly muscles from the equation.

When my swimming starts to unravel, I tend to try hard. KICK those legs, PULL those arms…but these things aren’t making me go faster or be less tired. In fact, I’m working a lot harder at the exact moment that I should be catching my breath.

When I stop kicking it’s easier to control my breath, easier to do the arm stroke correctly, and reduces the agitation and commotion that is swirling in the water around me. There’s less noise, less movement, and my heart rate drops. Just like when you take a walk break during a run.

I got to put this reset button into practice the next day at the aquathon (swim-run) that marked the conclusion of the swim camp.

During the season I swim open water about twice a week, but a race situation is different. At practice I swim a bit, and then hang on my buoy to chat with friends, and then off we go for another short leg…and more floating as the group of swimmers catch up.

But, BAM! swimming 1k yards in a pile of other people without stopping to adjust equipment or check in with your teammates is really different. It had all the elements to trigger some sort of splashy, buoy hugging panic in the middle of it.

Spoiler alert, THAT NEVER HAPPENED. I swam the *ENTIRE thing, taking a couple of reset moments to stop kicking and just pull with my arms.

*Well, except for that moment early in the race that I realized I hadn’t cleared my goggles properly and had to stop and rinse them, and kept hissing to myself through clenched teeth that THAT was such a ROOKIE move.

I even drafted another swimmer into the finish and then kicked past him, just as we were taught in camp. 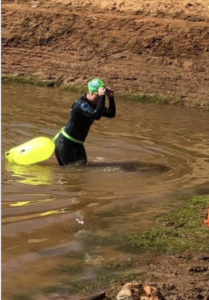 I ran a trail 5k in my onesie after the swim (and won the woman’s race for the combined long course swim and run!) and carefully avoided saying “this is totally my jam and I’m going to rock this 5k because I’m 10 weeks out from a 100 miler and damn right 3 miles should be doable!” because that was a recipe for tripping on a rock and smashing my face and breaking my collar bone. 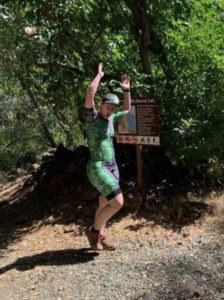 But the point is, the activity transformed for me when I found the reset which allowed me to still move forward….just with less effort. 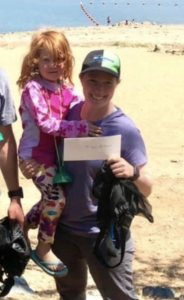 I won the woman’s race! 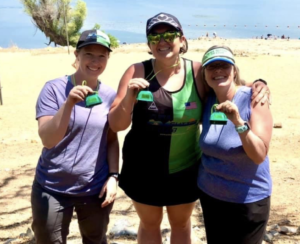 It made me think, what areas of life do I have a reset button and which are a binary “go, no go”? For the ones that lack a lite version, could they be improved if I could find a coasting gear for them?

Such as Horses. What does a coasting relationship look like with them?

And don’t forget about Nutrition. What does maintenance look like?

and….if I’m being honest….Life in general.

Is there a way to live a full and colorful life without the inevitable 7-10 days spent on the couch in a zombie-like state every 2-3 months when I have invariably ran myself down to the red line and then boldly tuck and roll over it, because have you ever tried to stop a locomotive running full steam down the tracks?

I have a list of things that I like to do on a daily basis. Things like writing, meditation, yoga, exercise, playing the fiddle. Let’s call that routine life. Most of the time most of these things get done. But, there are some days where events like traveling, ER shifts, certain family events, or losing some essential resource (like childcare, even if planned) puts all that into a tailspin. That’s fine….of course the routine life list goes on hold when life isn’t routine.

But, the problem is that after something interrupts my routine, I immediately want to yank the plane up. Get back up to life as usual as fast as possible.

My optimistic vision is that the sudden dive towards the earth is that it is but a momentarily blip. Cruising altitude will be regained shortly and then maintained after this minor derailing.

But. This is the reality of redoing that hard correction back to normal life: Plane stalls, spectacularly falls from the sky and crashes to the earth in a fiery ball of destruction. I eventually crawl my way out of the wreckage, sprint (limping badly, so the speed varies) to a plane and take off again.

…the next time my routine was interrupted by a mentally or physically exhausting event, I popped out a parachute instead? Floated gently to the ground, and then walked back over to a plane and took off again?

I sat down and made another list besides my routine expectations, and labeled this one “Survival”. What does a successful day look like if I’m in survival (or recovery) mode?

Then, I anticipated when I needed to be in survival mode. . I looked at my calendar marked the days that I could anticipate being in survival mode. Then, I added another one or more survival days after each triggering event (Family vacations, ER shifts, peak athletic events).

I’ll be coasting this time, instead of checking out of life when it all gets to be too much.

If 2020’s theme was to push my comfort zone and say yes to scary things, I think 2021’s theme is shaping up to be about finding that coasting reset button that allows progress and recovery in multiple different areas of my life. 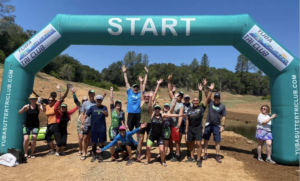 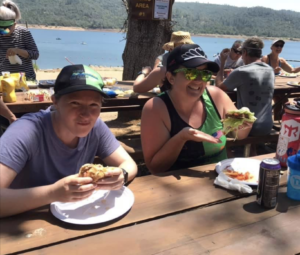 5 Responses to The Reset Button