Over the last couple of months I have discussed various camping set ups for shorter endurance rides lasting a day or 2, that require minimal set up. Multi days and longer rides that are out of a single ride camp can justify a more elaborate set up and can increase comfort! Of course – you can always continue to use your bare bones set up if you are that type, however I think most of us appreciate a few creature comforts if we are camping for 3-5 nights.

The easiest way to show you my tips for a base camp is through pictures. The pics you are going to see for the next couple of posts in this series were NOT taken during an endurance ride, but the set up is very similar and although I am very devoted to you – my dear reader – I am not so devoted that I’m going to set up an elaborate campsite in my backyard just to demonstrate my camping set up…..
Here’s the plan for the next posts in the series – I’m going to go through my multi day base camp set up a few elements at a time, then I’ll cover what I do differently during 100’s (because they deserve special consideration), and lastly a few horse camp tips (I’ve been focusing on the human).
Unless I’m going to stay more than 2-3 nights at a location, I tend to do a very basic camp, as described in my earlier posts on this series. However, a base camp lasting 3-4 nights lets me start addressing some basic “creature comforts”, such as a kitchen, shower, and a larger “living” space.
Below is my 3 person tent. I like my 1 person tent for the ease of setting up and its small footprint, however a larger tent is nice if it’s important to have a place to change clothing away from peekers (the event that is pictured was a VERY large bluegrass festival that does NOT have tons of people running around in spandex – and thus basically naked anyways – so it’s an accepted practice to change somewhere NOT visible….), or if there are items that need to generally be stored not out in the open (instruments etc.), or if you need “alone” time in a large group camp. It’s also nice to have a larger space if there’s inclement weather. At an endurance ride where it snowed and rain much of the event, I spent a majority of my free time inside of this tent with a Mr. Buddy Heater, under a Walmart “easy up”, reading. 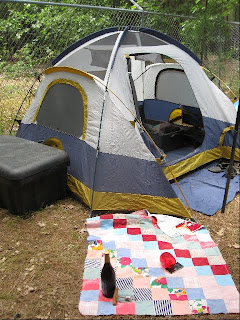 I’ve started using a large container outside of my tent during camping for items that I want to access to throughout the day, or small items I want to lock up. The container isn’t absolutely secure, but it’s bulky and not easy to get into with a padlock on it. Mostly it prevents someone that sees an easy “opportunity”, not a determined thief – however in most of the venues I’m camping at, most thefts, are probably “opportunity” thefts. I kept sweatshirts, my shower kit (more on this later), my backpack, knitting, the picnic blanket you see pictured here etc, in the tub. By not going in and out of my tent multiple times a day, it cut down on the dirt and debris that came into the tent.

Not pictured is my Walmart branded “easy up” (called a “first up”). These are approximately $100 and I’ve used mine for ~3 years. And I haven’t exactly been nice to it. It’s been used in all sorts of weather from snow, rain, wind, and sun. When it isn’t camping or at endurance rides, it’s used as a patio shade at the house. It’s held up quite well and I highly recommend it. Now that replacement covers are available for ~$30, I think they are even a better deal, as after 3 years of use, my cover probably does need replacing. I often put my tent under the canopy, although sometimes I just put my kitchen under it and use the rest of the space for shade.
Below is my kitchen set up. Everything, except the enamaled hot pot and the table fits into the duffel bag below the table. 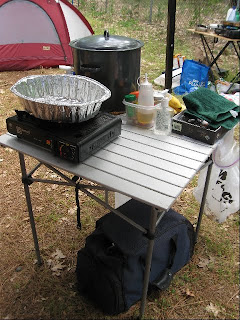 The foil pan on top of the stove is something I was trying out as a waste water catcher and wash pan – however I wasn’t thrilled with it and won’t be using it in the future – I have a better idea. so for now, ignore that element!
It’s nice to have your entire kitchen in one bag that can be thrown into the bag of the truck. The components of my kitchen are as follows:
One inclusive bag – I use a duffel that have a large main compartment, 2 side pockets, and a smaller front pocket.
A butane stove (one burner), with at least 2 canisters of fuel. This isn’t my favorite stove EVER, but it has done a good job for me over the years. I may do a product review on this, versus some of the other options at a later date.
Cleaning supplies –
1. foaming dish soap. I like this option because it rinses off very easily if you are washing dishes with limited amount of water.
2. a dish washing brush. A better option than a cloth or sponge because it will totally dry and not harbor bacteria like a sponge, but won’t require washing or drying like a dish cloth.
3. Hand sanitizer. I use the type in a pump, that has a head that will “lock” during traveling.
Eating “stuff”. I like having both plastic service and a few real pieces so I don’t HAVE to do dishes, but I have the choice. It isn’t necessary to have EVERYTHING – for example, if you have flat bowels, plates are probably redundant.
1. Plastic stuff: utensils, cups that will do hot and cold, bowels (more useful than plates)
2. “real” stuff: a plastic stemless wine glass, a seirra cup, a small wooden flat bowel, a metal spoon.
Clean up:
I no longer bring paper towels. They disinegrate too easily, especially when wet. Same for napkins. I now bring a cloth dish towel and dish rag. I use the rag to wipe off the surface of my table and the towel to wipe my hands during cooking.
Essential Spices and Oil in a tupperware: 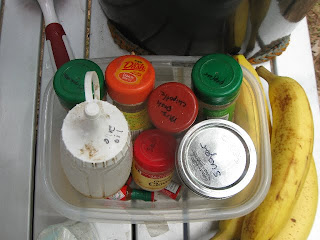 I managed to narrow down a few spices that were non-perishable that I could use on most foods. I used extra containers I had laying around, and made sure to label the tops of the lids with what was actually IN the bottles. In addition to black pepper, salt, olive oil, sugar, cinnamon, and tabasico, I’ve also thrown in 2 types of “Mrs. Dash” seasoning. I believe I have the lemon pepper and the chipotle seasoning in this kit. I like them because they are well balanced spice blends without salt that can impart a distinctive flavor to veggies or meat with little effort.
Box of essentials – 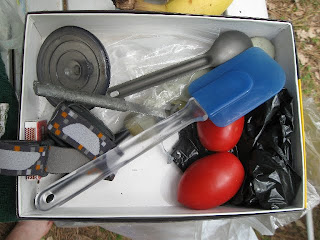 1. rubber scraper that is rated for use over heat
2. knife
3. small plastic cutting board – not pictured. I like the ones I get from the dollar store that are basically disposable and are foldable.
4. matches
5. corkscrew
6. canopener/bottle opener – not pictured as I managed to lose it on the trip before this one and I need to get another!
7. ziplocks – sandwich sized ones are the most versatile for me. I like to put 7-8 inside of a single one.
8. trashbags
9. clear bigger bags – these are bags without any kind of fasterner. useful for all sorts of stuff – as gloves to handle raw meat, to put feet into in wet weather etc.
10. pot holder
11. BBQ lighter
Last but not least is the cooking wares. I carry 3: coffee pot, old backpacking pot, small non stick skillet. I hardly (have I ever???) use the backpacking pot, but it fits in the duffel, so until I need the space for something else, there it stays, “just in case”.
I use the hot pot (the big enamaled pot in the first pic – it has a spigot at the bottom) for a variety of uses. It’s used as a water dispenser for general use, drinking, and washing dishes. I can put it on the stove or over a fire to heat large quantities of water (for shower, for example). I usually place a pan or bucket underneath it if I’m using it for washing or other uses where I’m not dispensing water directly into a container so there isn’t mud. If the water isn’t potable or generally icky, I also bring a gallon or 2 of drinking water in gallon containers.
Next I’ll cover my portable shower!