Recently someone encouraged me to share how I organize my ride photos and other momentos from endurance rides.

When I first started in endurance, someone told me I would regret not buying the ride photo from each ride I went to. But I was determined only to buy photos of the rides that I completed…..of course I realized how foolish that was after I didn’t complete any rides my first season. My family had taken pics of me in camp, but it was different from having that trail photo of me and my horse in all our glory movin’ on down the trail….

I really enjoy looking through the pages and looking at what has changed over the years. See! That breast collar! That was its first ride. Oh yeah-that’s right, I bought a new helmet right before that ride. Just looking at the pictures helps me to remember the whole ride better – the people I rode with, the adventures we had. It’s less of a documentation of my completions, or a “victory book” (which I think is what I had in mind when I started), but a memory book (which is vastly more entertaining).
I have it set up for me own viewing pleasure, but also in a format that I can easily take with me to rides when I have large crews with lots of down time (like Tevis).
The book as it stands represents my first one thousand miles on the trail with a few LD’s and endurance non-completions sprinkled in.
The simple rule is: 1 pic per ride – because it’s easy for me to have 4 or 5 pics I REALLY like from a ride – but it’s not has interesting if there’s a lot of very similar pictures from one ride, so I put 1 pic in the book, and the rest go in a pile to be used for xmas cards or other projects. However, there are exceptions. For Tevis I allowed myself to put in as many pics as I wanted. When I finally completed American River, I allowed myself an entire page.
As time has gone on and I’ve started receiving mileage patches and certificates – those went in the book too, along with a few dressage show photos sprinkled in, in chronological order between the rides. I recently came across my old AERC membership cards and decided to put them in the book at the beginning of each ride season, as a way to mark the years.
The biggest priority for me was that the book was easy to maintain. If I had to write or print or create or decorate, I would delay doing it and eventually the book would get out of date and I would feel pressure to update it, instead of pleasure of picking it up and flipping through the pages. The flexibility of whole pages that are adhesive is nice- I can include other things besides photos as I wish.
It seems a bit weird as I look through the pics and read my commentary – after all *I* am in all the pics and technically it’s a photo album of myself….but truly when I look through the book all I see are the horses and the rides, It’s like I’m not even in the photo at all.
I’ve included a pictures of a few pages to give you an idea of how it’s organized.
Here’s the book 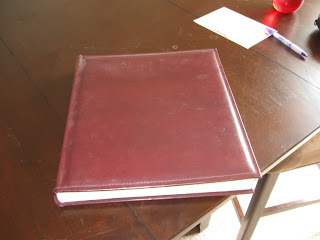 Here’s what the first page looks like. I try to get the contact info for all the photographers whose photos are in the book in case I want reprints or permission to use the photos somewhere. There’s also the poem book that my cousin wrote and illustrated when Minx died, and the sole pic I have of me and Minx on the trail our first season. She’s lame on the second day of Wild West (3rd ride of my first season) and I’m walking her in with a forced smile, all the while not knowing if that was my last ride on that horse, or even the end of endurance for a very long while. 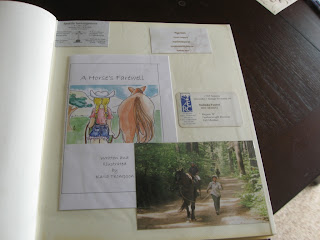 Here’s a typical page. The rides are in chronological order with each photo here representing a single ride. 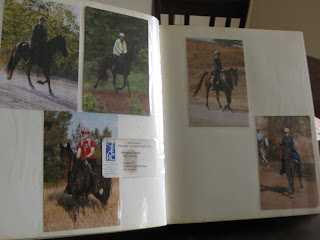 When I started to receive my mileage patches, I thought a good place for them was in the book, placed approximately where they were earned. 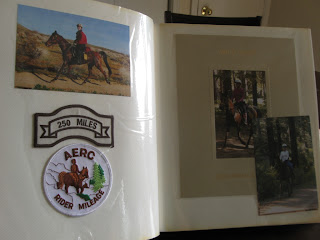 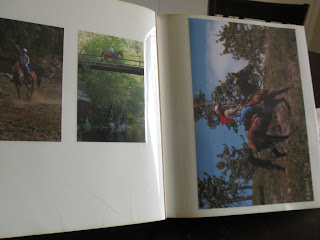 After I completed my first hundred, my parents and the ride manager of the ride sent me cards. I decided to include those here as well. The right hand page was my American River 50 completion. This was a big deal for me, so in addition to to the picture from theridephotographer, I did a home print out page of photos that my mom took during the ride. 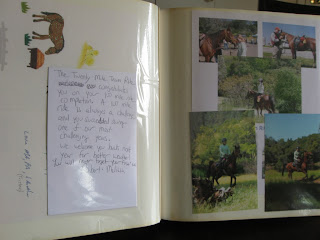 Here’s another example of “big deal” ride for me – the 100 that gave me 1000 endurance miles. I included 2 pictures of the ride – including a pic of me and another rider that I really enjoyed riding with. 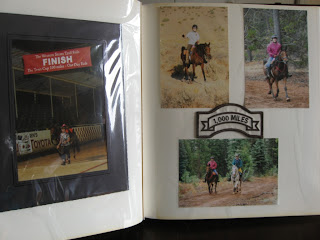 And finally, here’s the last page of the book so far – Farley’s certificates from the 2010 season, and the pic from 20 MT. Let’s hope there are many more pics to come! 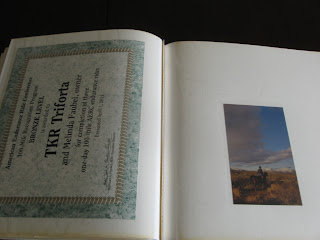