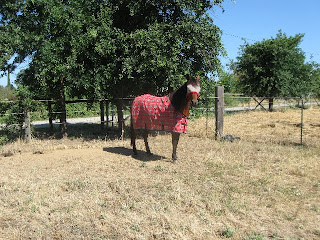 Farley in her favorite spot in the pasture. She looks relaxed but in reality she’s waiting until I’m close enough to justify galloping away…..

Kensington labels this product as a “Protective Sheet”, instead of a fly sheet – however most people in my area call it a fly sheet.
The flies in my parents area are incessant and vicious. They leave little welts on Farley’s skin and Farley (obviously) is unhappy about this. In Turlock I successfully controlled flies by applying fly spray a couple of times a week. Just misting her lightly was enough, combined with a flymask. However, it became obvious very quickly that this protocol wouldn’t work in hernew home. Farley was miserable and was very tense and tight with her nostrils squeezed up in disgust. I’m not a fan of keeping sheets and blankets on my horses for extended periods of time, however sometimes the benefits outweigh the risks. 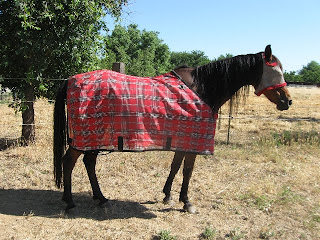 Side view of the sheet
I’ve used the Kensington for almost a month and can fully recommend it without reservations. Here are my observations and comments.
The Kensington flysheet will not be the cheapest fly sheet you buy, however there were several factors that I considered that made it worth $120 (Horse.com). Front view of the sheet. I swear the world isn’t crooked – it’s the camera 🙂
The Kensington flysheet offers breathability as well as protection from flies. Even with multiple 100+ degree days, there are no sweat stains on Farley and she does not appear to be overheated. The sheet has not changed her habits during the day – she still stands in the shade and sun according to her “schedule”. I didn’t think my color choice through and chose a red/black plaid according to our endurance colors, which aren’t exactly known to be the coolest colors for being in the sun, but it doesn’t seem to matter. We had a thunderstorm recently where it POURED all day (unusual for this area in June) and the sheet performed just fine. Even with this breathability, it provides excellent protection against flies. There is not a welt or mark on her body – which contrasts with her neck which is not protected, except by her mane and flyspray. Even though the sheet hangs down her sides, the flies are not landing on her belly – even though it isn’t technically covered. I’m not sure why, but I’ll accept it as a gift! 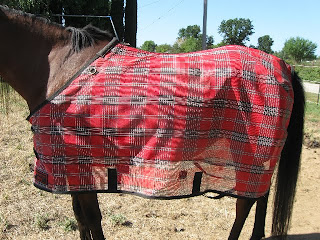 Another side view
Even though the packaging shows a fleece wither cover (and highlights it as a feature), my blanket came with a padded NON-fleece wither pad. This makes the blanket much more “country friendly” as Farley’s pasture has lots of foxtails and other weeds that LOVE fleece anything and hitch a ride. The fabric of the sheet does not appear to pick up stickers and weeds and even though has been on the horse continuously for 4 weeks, still looks brand new. I know the color of my blanket is new this season so I’m not sure if some of the other colors from past seasons still have a fleece section. Don’t assume that the picture on the packaging is correct and try to check it out for yourself, or talk to a knowledgeable sales rep. 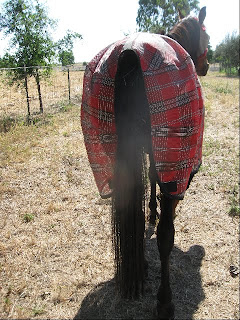 Back view
The sheets run very close to true to size, to perhaps a bit small. Order exact size, or if you are between sizes, definitely round up. All of Farley’s turnouts are 72″ which tends to fit her good to a bit large, so that’s what I ordered in the Kensington. It fits back to front perfectly, I wouldn’t want it any smaller. The neck and chest is cut very generously, which is hard for Farley – she has a big wither and the top of blankets tend to slide down to the base of the wither and “stick” there. I’m always worried that it will create a pressure point there. However, this material is “slick” enough it seems to slide well enough that there is no mark or pressure there. The sewn “darts” in the butt of the blanket are abit baggy – but we all know that Farley has no butt! I think that the blanket would fit a larger muscled animal just fine. The combination of how generous the chest cut and butt is means I’m really glad I didn’t size up. The sides of the blanket are very generous and hang down several inches below the line of her belly. This seems to discourage flies from landing on her belly. 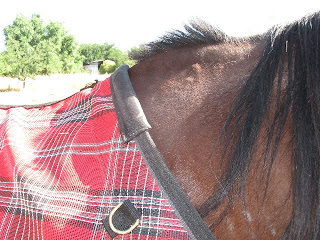 Close up of the wither
I wish the sheet had a tail flap – but it doesn’t. The sheet has a single belly strap, as opposed to 2 cross belly straps, however I don’t think it matters.
The hind leg straps fit a bit closer than I’m used to as compared to her turn outs, probably because the sheet sizing does not run large like I’m used to and the sheet doesn’t extend past the hind legs (may be a function of no tail flap). I’ve been keeping a close eye on how the straps are doing – I don’t want them to restrict her length of stride. After some observation, I’ve made them looser than I’m used to. That, combined with the section of elastic in the straps, seems to be working well. No rubs or chafing.
I like this sheet well enough that I will probably check out their flymasks when it’s time to replace the one that Farley has, and would be interested in their other products – such as the leg fly covers and neck covers – if I ever had a need. Having spent some time in the South, I know that my current bug problem is NOTHING like the issues that the folks down there deal with, or even what the riders on the XP ride are dealing with this summer as they ride across country. However, I’ve found that this is an excellent solution for a sensitive California horse and her owner and fits into my “buy it ONCE” philosophy. 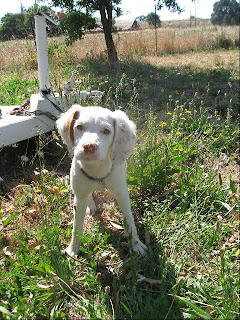