I have a long day ahead of me and can’t do justice to my camping story this morning, so instead I wanted to share two new pieces of equipment that I used at the camping trip.

Although there was a creek near by, the camp itself was dry of both livestock and human water. The thought of hauling buckets of water so that my horse could drink to her hearts content at the trailer did NOT amuse me, so I needed to figure out a way to carry 20-25 gallons of water.

I’ve played with the idea of getting a water container for the trailer, but I’ve always balked at the price. At least a $100! I’ve always been sure that I could rig up something for that kind of cost.

The day before I left was the day of reckoning. I visited way more stores than I care to list, looking for something that would hold water that was affordable. Rain containers were the same price as buying a trailer water container, and those 50 gallon blue barrels were no where to be found. Finally I saw this: 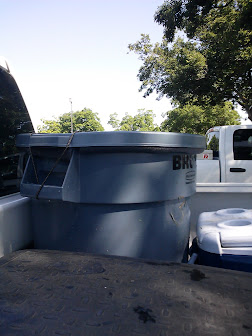 “It’s a trashcan” you say. Yes, but it was a brand and type I recognized from working at the plant at Fosters. Most trashcans won’t reliably hold their volume in water – the container just isn’t designed for the weight and pressure that acts on it when filled with water, and if they do hold water, they usually don’t hold up well to being moved or bounced around.

This particular brand and model (a Rubbermaid Brute with the FLAT lid) we regularly filled with water or sanitizer and then pushed them around the plant on little wheels by the sides and handles YES!!!!!!!!! For $35 I had a 32 gallon container that I could put close to 30 gallons in.

I had some time to kill before leaving town to meet up with my compadres so I tried to find some weather stripping that would adhere to the inside of the lid where it met the lip of the container. Unfortunately the only weather stripping I could find (limited to the stores that had parking lots suitable for my trailer….) was tiny tiny tiny. Pipe insulation, however, was a mere 99 cents on sale. Bingo. What I didn’t use I could throw in my trailer and use it to cover any sharp edges I might have that I haven’t bothered to address.

To get the water out of the trash can I used a short section of hose and used suction to fill buckets on the ground by my truck. Another option would be to use my battery powered shower, or to dip a clean bucket in the top.

I was very very happy with the system. I used the water for sponging, animal water, and wash water and had plenty left over. Probably sufficient for up to 2 nights, as long was there was water on the trail that could do some supplementation when the horse is working hard. 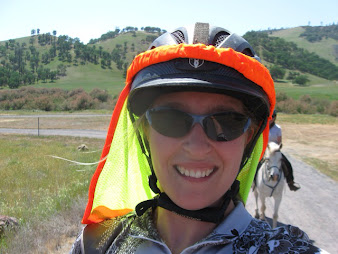 When the boyfriend brought these home from work I knew IMMEDIATELY I must have one. He refused to give one to me (even though he had 2 and they were free), so I “borrowed” one for this weekend and it was WONDERFUL. And it fits my color scheme. Technically it’s they are for hard hats, but helmets are similar enough that I didnt have any problems with it budging, and there was no tape that was melting off in the middle of the day. I guess the handkerhief + velcro works nearly as well, but I liked this better since there was no glue or sticky on my helmet – just the elastic band with small pastic hooks that hooked on the edge of the plastic shell (although it seemed to stay well even without being hooked).

You are going to LOVE the camping story, so stay tuned!

No idea where you are going to find yours, but it made a significant difference in how cool (both in temperature AND in my degree of colorfulness!) I felt on the trail.