I purchased this item for full price here.

I am always on the hunt for the perfect way to hydrate on runs. The easy answer is “there isn’t one and every single option will either annoy me to death or cause shooting pains after 3 hours”, but I can keep trying right?

I’ve gone through various brands of hydration packs and waist belts, but the one untouched category was handhelds.

Mostly because of their obvious drawback when riding. 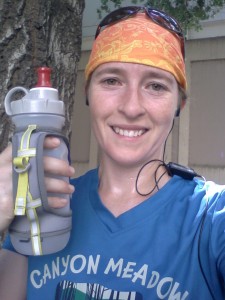 Pics are from after my run this afternoon. Thus the attractive sheen of sweat and slightly endorphin high look in my eyes.

A quick review of my hydration woes.

Bottom line?  I have something that works, but there is definitely room for improvement. So, when I was looking to treat myself with a new piece of gear, I decided to give the handheld water bottle a try.

I chose the Ultimate Direction with the kicker valve because it got excellent reviews, and they made a women specific model. I have very small hands, so I was hoping that the design would be less bulky and sized more appropriately.  I wasn’t sure what to think about the “kicker” valve. It seemed like people either loved or hated it.

$25 is steep for a water bottle and strips of cloth.

However, I figured if I bought a cheap version of a handheld water bottle, I could hate it and still not know whether I really would have liked it if I had just invested the first time and bought a well designed version.

I’ve been down that road before – buying several cheap versions – before – more often than not – I end up buying the nice one anyways.

I’ve used it on runs up to an hour over the last couple weeks and here’s what I think. 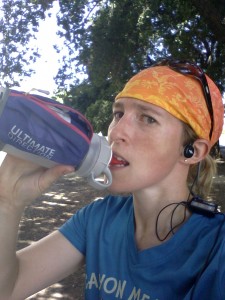 The kicker valve takes time to get used to

It reminded when I switched from a camelbak bladder to a platypus – I could NOT get water out of my platypus mouth piece. It was because I needed to pinch the valve a little differently on the platypus to get the max water flow than I had for the camelbak. It was a matter of retraining my muscle memory to manipulate differently designed valve.

The kicker valve is the same way – it’s not like a camelbak or platypus bladder, and it’s not a like a regular water bottle top either. I’ve taken it on 4 or 5 runs and I’ve finally gotten to the point where I can consistently get a good volume of fluid on the first try without a lot of trouble.

But it doesn’t leak

This is huge for me. It doesn’t leak when I move my hand and arm in normal running movements when the valve is in the “drinkable” position. I can throw it in my running bag (and regularly do) with the valve in the “down” position and it doesn’t leak in my bag. 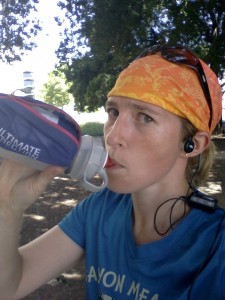 I like I can drink at a variety of angles – I can run and watch where my feet are going. The valve is very flexible.

…is great. Just big enough for my phone and ID. I’ve started using mapmyrun.com more during runs instead of going to the website afterwards and manually putting in routes because it’s easy to take my phone with me (and since the bottle doesn’t leak I don’t worry about my phone being there).

But isn’t it annoying?

Well, I regularly run with a e-collar controller in my hand. Or an ipod. Or my phone. Or a leash.  Rarely do I get to go truly “hands” free except during a race. It doesn’t really bother me *that* much. Even totally full it’s not that heavy, and within about 20 min it’s only 2/3 full. The sloshing noise is much less than the jostling of pack on my back.

So how does this fit into your other hydration options?

I’ll probably chose the handheld bottle for races that have aid stations that are close together for marathons or shorter. The water bottle holds ~20 ounces, which is enough for about 1 hour. It can be quickly filled at aid stations in the time it takes me to refuel and I can switch between elyte drinks and water quickly. I don’t need to carry much nutrition on me (ah the joys of having a near-iron stomach running so far – can usually find what I need at an aid station) so I won’t need the additional storage of a pack.

I also find that on my lunch time runs, which are normally up to 1 hour in the heat of the day (typically 95-100 degrees with low humidity where I live) I grab this water bottle, whereas before I would never wear a pack or brought water. Not every run I do needs a hydration plan – but practicing my hydration plan more frequently definitely isn’t a bad thing.

For distances longer than a marathon or where I need to carry more gear on me for some reason there’s another pack that I was given to review….stay tuned for that review!  And for longer self supported runs, or races where I need the additional water storage, there’s always my Nathan pack.

What’s the annoying things about the bottle?

Just one. the little “cinch down” strap on the outside of the comfort strap won’t stay with tension. It loosens. Why have a cinch strap that won’t hold tension? I’ve learned to adjust to the bottle being a little loose on my hand, but it would be nice to have the option to cinch the strap down and have it stay there.

I like it. I like it a lot. Is it worth $25? Probably not. $15 sounds a bit more reasonable. However, considering the hundreds and hundreds of dollars I’ve spent on hydration options that didn’t work out, it’s hard to begrudge $25 for something that I actually like and use. It fits a niche that was previously unfilled in my gearlist – a short run hydration option, or an option for well supported trail races with more frequent aid stations.