I’d happily welcome any suggestions for managing the non-Arab through rides, too, and I promise to pick and choose whatever seems to work for us!

This was the last of Figure’s question and the question I would MOST like my readers to give advice on either here or on their own blogs.

What I post on this blog, including the previous post on how to condition the endurance horse, is based on my own one-rat study.  Many of you probably feel like I’ve jumped off the deep end and adamently disagree with some of my advice.  That’s OK – my hope is that even if you think I’m full of horse apples, that there may be one little gem in there that you can take away and think about.  It’s certainly what I do when I read other people’s stuff – I rarely agree with everything they say, but there’s usually one thing I can take away.

Those of you that are long time readers of this blog may read some of the stuff I posted yesterday and say “but that’s not what you said 3 years ago!!!!”….and you would be right.  As much as I value consistency, I value having an open mind and constantly reassessing my methods to best of the current knowledge out there.  So yeah, my philosophy on conditioning has changed over the years.

There’s some great questions and comments on yesterday’s blog, and I’m going to attempt NOT to repeat the information here.  Today’s post is concentrated on my experience with conditioning an arab versus a non arab.

I’m going to start with Farley, because I think it is easier to talk about arabs and then contrast the non-arab.  remember that this is my opinion in my one-rat study – which is why it’s important for you to post and comment if you have a different opinion!

After building a base on Farley, I started doing 50’s, and fairly quickly I attempted a 100.

Let’s remind ourselves what the see saw looks like: 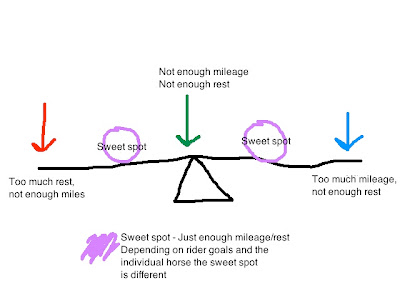 In the first part of Farley’s career, including the first time I attempted Tevis, I was operating in this range: 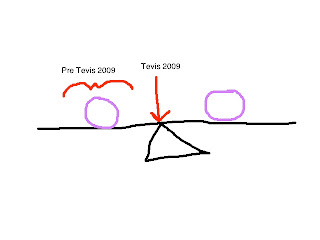 I stayed in this sweet spot for a year, accomplishing a lot. But then, I started to move towards the right hand side without really aknowledging that was what was happening.  Setting aside additional issues such as nutritional that caused my pull at Tevis 2009 – another major factor was that I had shifted from one side of the see saw to the other, without quite making it.  I either needed more rest or more mileage and as a result I ended up in the uncomfortable position of the middle…….

I had a comment on the last post of how do you know where you are on the see saw – It’s either in hindsight – but if you know you have minimal miles for what you are trying to accomplish you are on the left hand side.  If you are trying to “make up” for those minimal miles by getting in “one last” ride before a race, or if you are pushing for your horse to go harder and faster during those last rides because you are stressed about the amount of conditioning and they aren’t giving it to you, then it’s very possible you are starting to move towards the middle.

After Tevis 2009, I added dressage lessons, interval training, and riding more days out of the week, as well as more endurance rides to my season.  I moved to the right hand side of the see saw. 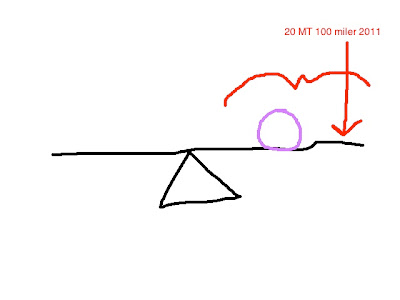 I stayed in that sweet spot for over a year.  I did 3 100’s that year, including Tevis and Farley looked GREAT.  But then, I added jumping to our cross training and I asked for one ride too many in the context of everything else we were doing and I shifted once again to the right hand side of the see saw and I got pulled again.

I want you to notice a pattern.  First off, I have 2 pulls – one from each side of the see saw.  Choosing one philosophy over the other does not make you immune from getting pulled.  Second, both my pulls resulted from me shifting to the right of the see saw towards more miles and less rest, than the other way.  Far more damaging than not enough miles is the effect of not enough rest.

How does this relate to a non arab?

The rules of rest still apply, but somehow you need an increased number of miles while still maintaining enough rest. 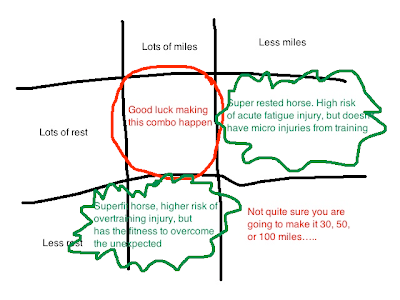 I found that even with a LOT of miles I wasn’t getting as much “bang for my buck” so while that number of miles would have put me in the “superfit” category on an arab, it wasn’t with my standardbred.  And I needed more miles to keep her fit which kept me out of the superrested category.

If you go back and read in the comments of yesterday’s post on my “3 stages of conditioning an endurance horse” I found that I spent a lot of time alternating between stages 1 and 2, and often was never able to get out of stage 2 – stage 2 that was the end point.  With Farley (an arab) I spent minimal time in stage 2 and bumped to stage 3 really fast.

One other anecdote: My sister went with me on her mustang to most of my early conditioning rides on Farley (stage 1 and 2 training) and I noticed the same thing on the mustang that I did with the standardbred.  Even though the mustang had a more ideal living circumstance (on pasture with other horses) she did not condition as fast or keep that conditioning.

Anyone else out there have a differing opinion?  Or even thinks I’m right?  Would especially love to hear from Funder, AareneX etc. as I know they not only have way more experience in this area, but it’s recent!  [looking at you Funder with your awesome 2 day 100 mile Tennessee walker :)]