Home » Uncategorized » The Mare Has Spoken

The Mare Has Spoken

Either stay in your ^&%^$%## box is THE holy grail of horse training and when performed EXACTLY 23 times will result in MIRACLES after the 23rd session as evidenced during the next saddle session…….or Farley really really really really likes her new woolback pad.

Farley is a sensitive mare, but not a drama queen.  She’s talking if you’ll listen, but if you ignore her, she still does her job.  She’ll give you a good effort because she’s a good pony, but maybe not a spactacular one. It’s one of the things that has made her a good 100 mile horse.  She doesn’t hide stuff, but her reaction is in proportion to what is wrong,

A couple weeks ago I traded a pair of used rennies for a brand new saddle pad.

It wasn’t because I *needed* another saddle pad – I’ve been doing quite nicely with my Haf pad during conditioning rides and my equipedic for competitions. But, I knew that both my pads were aging, I had the rennies and the pad was worth more to me than the rennies (and vice versa for the pad owner) and as a not-so-reformed-tack-hoarder I just couldn’t pass it up.

The pad was appropriated by Tess for a while. 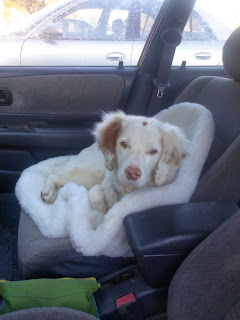 But yesterday I finally managed to remember to take the pad to the stable and decided a ride was in order.  Farley and I haven’t had a *real* ride since Gold Rush 3 weeks ago, where at 35 miles she was lame.  This meant that this ride was either going to be characterized by:

1. Farley being continually behind my leg all the way out, strong on the way in, but generally unenthusiastic about doing a ride where there are no ribbons (if there’s no ribbons what’s the POINT?).

2. Farley being very forward and attempting to take liberties one by one, culminating in her either throwing a couple bucks, or deciding the white dog needs a good biting.

I was further guarenteeing one of these 2 ride types by riding her in the middle of the day (instead of late afternoon) which she considers her napping time, AND by riding her the day after we had a very cold wind advisory and it was still a bit breezy.

Of course, there is a third theory that could join 1. ground work miracle exercise, or 2. woolback pad lover.

Theory #3. Farley, being telepathic and a mare, had somehow overheard a conversation earlier in the day that I am *seriously* considering buying a rushcreek gelding in the next year.  And as usual when thoughts of retiring Farley or getting a second horse are seriously contemplated, Farley puts her best hoof forward. 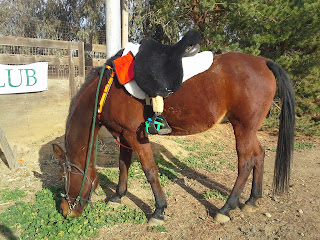 The woolback fit PERFECTLY under the Solstice, with just a little extra behind the flap that will protect her skin from the bootbags I usually have there during rides.  I don’t usually wear a breast collar on these rides but I quickly found out that if I wanted to bring my phone along (with the GPS) I had NO where to velcro my little Griffith’s bag without the breast collar.

This woolback doesn’t have keepers, which I was a little concerned about, since my Solstice is a slick leather bottom…..but the shape is right and the price was right so who am I to complain?

This isn’t the first woolback I’ve owned, but it’s the first new one. There was an old-as-dirt-wears-like-iron dressage shaped woolpack that was one of my first endurance pads – that I still own.  Here’s a pic of Farley wearing it some of her early rides: 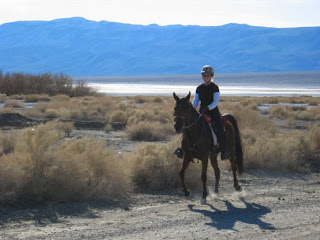 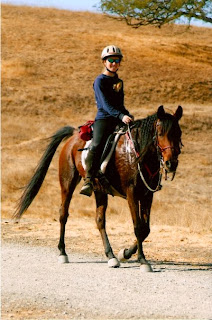 Above: Livermore 2008. Photo credit Bill Gore (BTW – this was Farley’s very first ride, just after the lunch check :). Believe it or not, we won. Totally by accident.

And then there was another woolback that didn’t see much use that I later cut up to make a seat cover – it was for a 16″ english saddle and my saddles were always too big. I think I used it a couple of times, but the saddle was always so close to the edge of the pad I was afraid it would create a pressure point.

Since these pics there’s been a variety of other pads – skito, Haf, Equipedic and others. I switched out from the woolback because the fleece under my leg made her barrel too wide with the Duett saddle that already had a really wide twist.  When I sold the Duett I never switched back to using the woolbacks regularly.

The point is that this is not the first woolback that Farley has ever worn.

I don’t know if the equipedic pad is getting a bit old, stiff and grungy.  Or if the Haf pad – synthetic is ok for conditioning but not for rides – is trying her patience.  Or if the dressage shaped woolback really is reaching the end of it’s lifespan……. but I have NEVER gotten the kind of performance out of Farley that I got yesterday on a conditioning ride, in that new woolback.

The mare of has spoken and she says: Woolback please

Farley is a trotter, not a canterer.  She doesn’t canter unless everything is perfect – my position, my balance, saddle fit……Especially not on the way out from the stable.  And if we do canter and the footing gets iffy or there’s a down hill, she trots.

We cantered EVERYTHING yesterday.

She started offering to canter after our walking warm up AWAY from the barn. Usually this is a sure sign of naughtiness to come.

There wasn’t a single buck.

Not a single moment of unbalance on her or my part.

When she would slow to stretch and snort she would trot for a couple of yards, and then ask – ever so politely – if she could canter again.  And then she would give me the prettiest, balanced canter transitions I’ve ever had.

She navigated single track and branches and clumps of star thistle – normally stuff that might make her start to cross canter.

We cantered/galloped for FORTY FIVE MINUTES. Near the end I was so exhausted and noodle-like I missed the turn to make this particular route an even 10 mile course.

This is what a brittany looks like after running along at race horse speed for just under an hour: 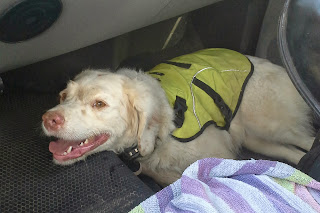 Tess quickly realized the agenda for today and instead of crashing through the brush and making figure eights around me and Farley, she ran straight as an arrow ahead of us on the trail.

On the last little stretch towards home Farley will either walk or trot in.  This time, she turned the corner in a perfect balanced counter canter, and cantered all the way to the gate. Then stood quietly as I melted off her back to check her pulse.

This is the first time I’ve ever wished I could freeze time – keep Farley just as she is now, 14/15 years old, sensibly moving down the trail powerfully, fit and sound.  I want this impossible thing so bad it makes tears come to my eyes as I write this. I could have done ANYTHING on that horse yesterday without fear.

If there was one thing that would make me become an equine vet, it would be the promise that I could keep horses like Farley sound and happy for as long as possible and make a real difference in their length of “employment” and the quality of their “retirement”.

8 Responses to The Mare Has Spoken