Home » Uncategorized » Beyond my first 50k

Beyond my first 50k

Let’s say that you didn’t want to wade through all the info in the last 2 posts (but you looked at the pretty pics right?) but still want a run down of the most important take-aways. Or maybe you want to know “you’ve completed your first ultra….now what?”

You are in the right place! Writing the last 2 posts allowed me to organize my thoughts and I’m ready to consolidate it down into something useful for the person who has no intention of ever running an ultra, but does other endurance sports like endurance RIDING.Many of the same lessons can be learned and applied in both sports. And, I’m ready to talk about some of my bigger running goals.

For more information/details about any of these, refer back to the “nitty gritty” posts.

My biggest strength in endurance sports is also my biggest weakness

I deal with heat really well.

Whether it’s because my schedule over the years has only allowed me to run in the heat of the afternoon, or because I grew up without air conditioning in CA’s central valley – heat conditioning comes really naturally to me.

I HATE cold water. Hate it. Cold water against my skin triggers a pure hate/adrenaline/pain response that comes from some emotional reptile section of my brain/gut. 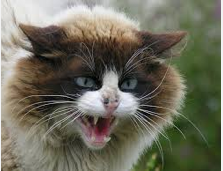 That was OK on Saturday when it was 80 degrees and I was going slowly.

It is NOT going to be OK when I step up my distance beyond an LD (Funder and I kept calling the aid stations “vet checks” and distances under 50 miles as “LD’s”. LOL) or when it gets significantly warmer this summer.

Here’s what my logical mind is telling my emotional gut response right now: 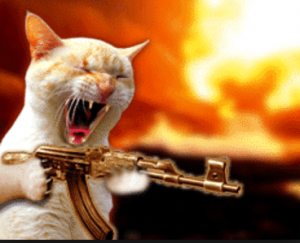 I will consider this my own homework before my next big event in guaranteed hot temperatures – the ride and tie championships in July.

Where do I go from here?

At the end of the race Funder and I sat down and ate BBQ with a guy who ended up being Errol Jones, “The Rocket”.(link to his FB page). If you are into podcasts, here’s one where he’s being interviewed and giving advice. 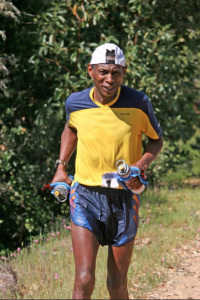 Now, without even knowing who he was, I knew he was the “real deal”.

I was just getting ready to open my mouth and see if I could start a conversation.  Maybe mention I had finished my first ultra, and how much I had enjoyed the course.

Funder beat me to it. She had a different idea of how to start a conversation: “Melinda here is going to run the western states some day!”

Well, yes, but that isn’t’ the sort of thing you actually tell someone, especially if they are actually in “the industry”.

Funder had just done the equivalent of plopping down next to Barbara White at a local ride and announcing my intention of doing Tevis now that I had completed my first ride.

Until you have proven yourself a little bit, it’s easy to say something, and you need to do something before you can go around saying crazy stuff like “I’m going to vet school”, or “I’m going to ride Tevis”. 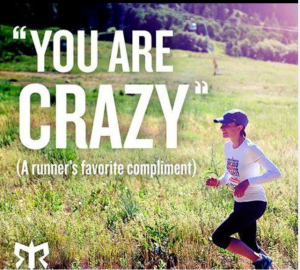 Except, Errol didn’t laugh at me. He looked at me seriously and said “this was your first 50k”.  I nodded and wanted to die of embarrassment. Funder beamed.

And I realized that perhaps now that I had my first ultra under my belt, wanting to run a 100 miles doesn’t sound nearly as obnoxious.

Apparently I hadn’t picked the easiest 50k in the area. It was of moderate difficulty – doable, but challenging.

He said that both of us looked good – we had finished well.  I was beaming now too.

And then he started talking about how to train for longer ultramarathons (50 miler, 100 miler) and it was EXACTLY the advice you would hear around any ridecamp potluck. Go on long runs by yourself to build mental toughness. Recovery is as important as training miles. Run an LD once a month. Throw in a 50. Do some back to back long runs (multidays) when you are bumping up a distance. There’s going to be times on the trail that you don’t think you can do it and you wonder why you do it. If you don’t have any DNF’s (pulls) on your records, you haven’t done enough races.

Funder pointed out later what he didn’t say.

And that is as important as what he DID say. If an LD rider came up to me and said they wanted to do a 100, and I thought they weren’t ready for a 50 because their horse looked beat and they barely made cut offs, it would be different advice from a rider whose horse finished and LD tired but strong with time to spare. 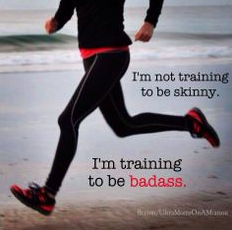 My life is volatile and chaotic right now. I’m not in a position to put races on the calendar and have any certainty that I’ll actually be ready or able to run them. So, I’ll do what I’ve done for the last 10 years. Run when I’m able, educate myself as much as possible, and take advantage of possibilities when they come up.  And someday, you might come to the blog and find that I’ve signed up for my first 50 miler – without a horse.

6 Responses to Beyond my first 50k