Recovery – in life and sport

“As endurance athletes we are pros at putting one foot in front of the other – even when the more rational part of us is confused why we are still moving forward.  What’s often harder is that “other” phase of training, the part where we are NOT logging the miles and indulging in a bit of rest and relaxation.

Adaptation, the biological process that allows us to go further and faster, is dependent on the relationship between how much stimulus we apply during training and the quality of the recovery period.

Put simply: Recovery – it does the body good.” 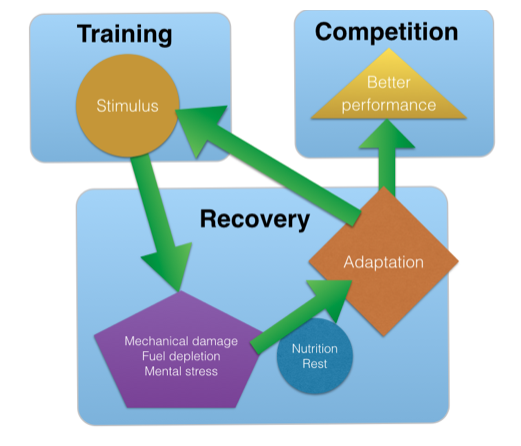 That folks, is the intro to a finished essay and proof that I have accomplished what seemed impossible on Monday.  I completed a 1,000 word essay that was passable enough to submit for consideration of the 2014 Ride and Tie Association Vet student scholarship.  So now I cross my fingers and wait.

On Monday I had a 3,000 word VERY rough draft.  It was a very very very long ways from being done. You see, I’ve done enough writing that I have a feel of how many times I need to revise and rewrite essays for them to be considered for *real* publication.  It wasn’t just a matter of eliminating a mere 2,000 words – one thousand words is the magic essay length where every single word placement and choice matters. There isn’t enough space to repeat yourself, but it’s enough space that it’s easy to not get around to saying anything worthwhile. A 1,000 word essay requires a lot of intensive editing.

Monday I announced to my friends I couldn’t possibly find the focus or motivation to even start and I guess that was it for this year. My sympathetic friends nodded their heads and said not to put too much pressure on myself. My goal of the day was a trail ride – my first “real” ride since before I left for the externship at the beginning of June and my sister died. I practically forced myself at gunpoint to the stable where I put in a fast and fabulous 1 hour trail ride on Farley. I slept good that night.

Tuesday out of boredom, I opened the document file and started to edit “just for fun”. A couple hours later I had a 1,000 word essay and could start the “real” editing process. In fact, I realized I could probably squeeze in enough edits in 3 days to approach a final draft. I announced to my friends that I might submit something even if it wasn’t my best work, if it was borderline not embarrassing. My long-suffering friends nodded their heads and said that was reasonable. The goal of the day was a run.  After getting home and taking a 60 min nap I stumbled out of the house at 8p with the white dog and convinced myself that a run was absolutely necessary. Necessary for what I wasn’t sure, but I had an inkling that the run that day was as important as the ride the previous day.

Wednesday I woke up with dawn before my alarm went off for the first time in a week. I was inspired to re-write several sections of the paper and I realized I was at the end stage of the editing process. A ride and run under my belt, I decided that Wednesday would be the day I stopped ignoring my nutrition and I made breakfast AND packed a lunch.

And that, my Dear Reader, brings us to this very moment

As I re-read my essay introduction as it is posted here, and I realized something extraordinary had  happened.  I thought I was writing and editing an essay about recovery in relation to a sporting event, but I was also writing about recovering from life-altering events.

I did more than finish an essay this week – I’ve put one foot in front of another because that’s what I know how to do best, and what seemed impossible on Monday morning has been accomplished – an essay, a run, a run, and the motivation to get up and do something – after a long and appropriate recovery.

3 Responses to Recovery – in life and sport