On Friday I submitted two transfer of ownership forms to the Arabian Horse Association.

One was a very timely submission for Merrylegs.

Can you guess who the other one was for? 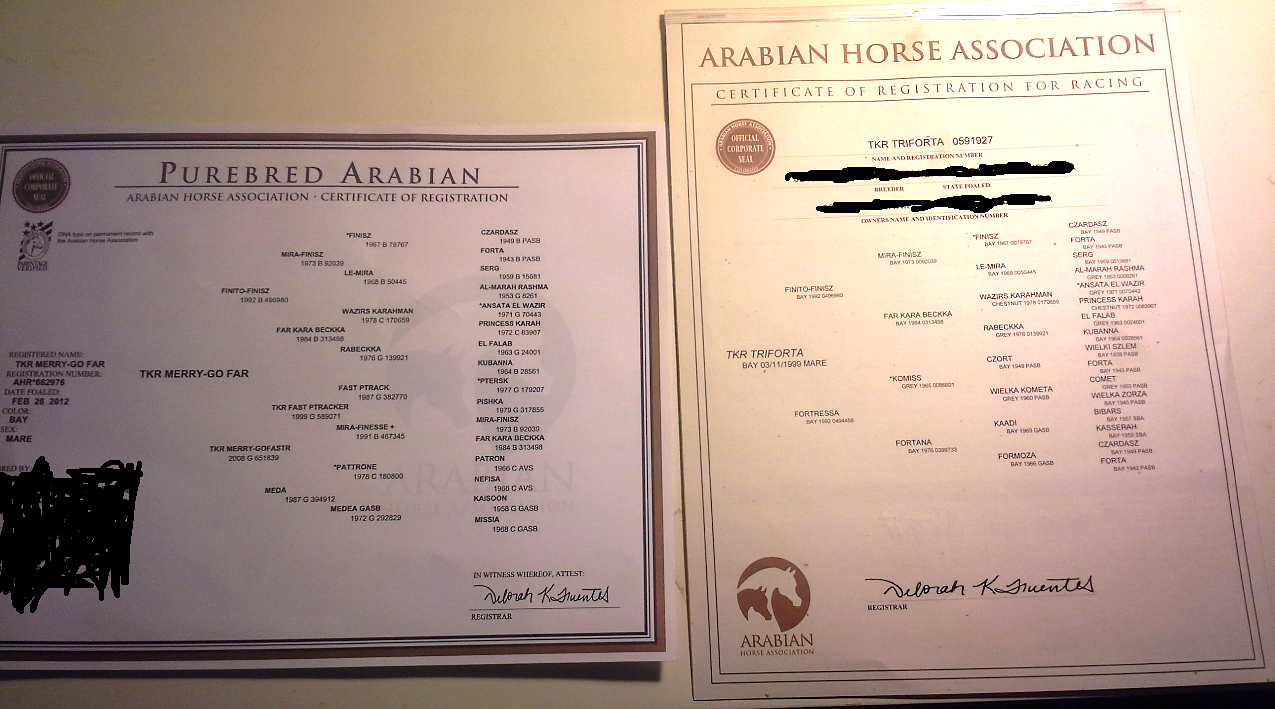 After 6 years 5 months and 1 day of ownership, I finally submitted Farley’s transfer of ownership.

Does this mean I’m keeping her?

The fee wasn’t too bad.  $55 for Merrylegs and a mere $90 for Farley.  I would have been tempted to date Farley’s transfer more recently (it was signed but not dated) if the penalty was more than $35, but for that amount, I want to the record to reflect the actual date I got that little bay mare named “Estella”.

I’m really hoping that when the registration papers come back they maintain Farley’s registration for racing.  Just because I think it’s cool :).

Now I suppose you want a Merrylegs update.

She continues to be the most laid back young horse I’ve ever been around. In fact, yesterday I begin to wonder whether she’s too laid back for the job I have in mind for her.

And then I remembered that Farley was and is exactly the same way.  And remains completely laid back on a day to day basis….except when it’s time to do her job. I’ve never gotten anything but compliments from people on how easy she is to handle, and Merry is shaping up to be very similar.

Merry comes up to me no matter what – even if she’s eating – and totally wants to hang out. She’s cuddly without being pushy.  It’s amazing.  My last 2 personal horses (including Farley) were/are typical race bred personalities. Friendly and have a relationship with me, but are “polite” and a bit standoffish.

When I drove up to Funder’s trailer at Derby where Farley was waiting, Funder told me that Farley started nickering for me as soon as she heard my car, before I actually came into sight. I’m definitely on Farley’s list as a “very important person” – but as much as it warms my heart…..it’s also very obvious that her affection is linked to my status as “bringer of goodie buckets”.

Merry’s affection, at least at this point, is different. It seems linked more to me as a familiar object in a world that changed, and a desire for company.

Today (Thursday) she started to take just enough liberties that I think it’s time to move onto the next step – actually asking her to do stuff beyond just standing there quietly for scratches. It feels good to be moving along at her pace.

Now for the REALLY fun stuff.

What should Merrylegs’ color be? I’m not promising to go out and buy all new equipment for Merrylegs’, but having a color in mind as purchases need to be made helps my indecisiveness!

In addition to a “barn” color, each horse has their own color.  Minx and Farley were completely different sizes so I had to have 2 of everything, and it made it more convienant to have their tack color coded.

Besides Farley’s set of tack I own a black biothane bridle (no color because I couldn’t decide…and Matt decided black went with everything – and he was right!), and a red on black breast collar that used to be Minx’s that I didn’t sell because I REALLY liked it and it sorta cinches down to arab size.

So, there’s definitely tack to be bought at some point!!!!  Or at least some personal equipment of Merrylegs that doesn’t need to be barn colors.

Does anyone have any other favorite color combos that look good on a bay horse?

19 Responses to The fun stuff