It’s time for an In Real Life post! Where I share with you my training and goals as the months go by “in real time” so my Dear Reader can see for themselves that training for 50 or 100 miles isn’t insane – it’s a bunch of small things that add up, and yes it’s totally doable and to still have a life.

Remember that nice little event and goal post I did at the beginning of the year?

Totally and utterly shot to hell.

Whiskeytown 50 mile scheduled for next week, which wasn’t even on the schedule at the time of that post since it ended up being plan C or D or Z….CANCELLED as of a week ago.

V.E.T ride….CANCELLED (epic rain isn’t doing us any favors on the trails)

Cache creek? Got asked vet it. Not riding.

Tevis? Ditched in favor of Virginia City 100 in September.

And of course, there’s that little detail of being completely and utterly broke this ride/run season….which has caused me to sit back and look at my ride schedule and ask myself what is really important to me this year.

Turns out it’s simple. I want to see new trails, do new rides when I am able to go to one, and do more rides with friends.

You see, I tend to do the same ‘ole rides year after year. Ride the same conditioning trails over and over. Deciding to ride Virginia City instead of Tevis sparked something. Do something DIFFERENT. Accept friend’s invitations to see different trails. Branch out.

Which is how I found myself at Whiskeytown lake trails, in the rain, riding for 3 hours and 40 min on trails I’d never seen, with 2 excellent friends. 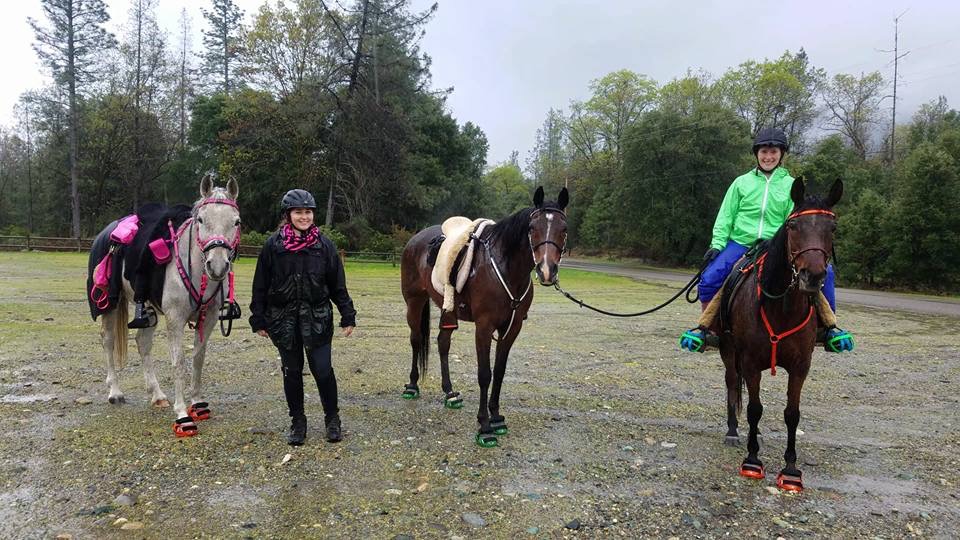 Photos of this ride are courtesy of Aurora @ redheadedendurance.com. It sounds cliche but I was too busy enjoying the scenery and riding to take out my camera. T* and her horse N* on the far left, Scout (with Aurora behind the camera), and me on Farley.

We were all planning on doing the Whiskeytown 50 mile ride 2 weeks later, which was the motivation for getting out there despite the weather….ironic since we got notification the ride was cancelled as we were untacking horses and loading up. 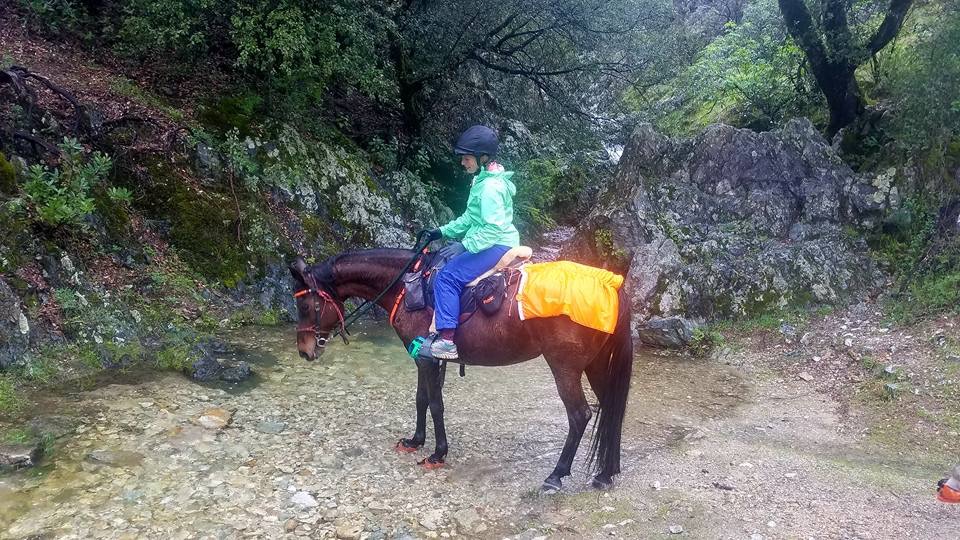 Wanna drink? Or just continue to not drink since 6am this morning when we left since you*know* this isn’t a real ride. *headdesk*.

But it didn’t matter because….

…I can’t remember the last time riding for over 3 hours FLEW by and more importantly…..I can’t remember the last time this mare had this much FUN. I could feel her joy as we went along. She was positively perky. Even though it was raining. Didn’t try to pick an argument with me once. Exquisitely handled the technical trail LIKE A BOSS while her rider was shrieking internally about things like cliffs and water and pointy rocks and OMG SHE’S GOING TO BLOW A TENDON I JUST KNOW IT THIS IS SO MUCH FUN.

She was on FIRE the whole time – going away from the trailer after the first loop as if we were 2 minutes into a rainy ride, not 2 hours, not caring a damn whit where the trailer was and if we were headed towards or away from it. 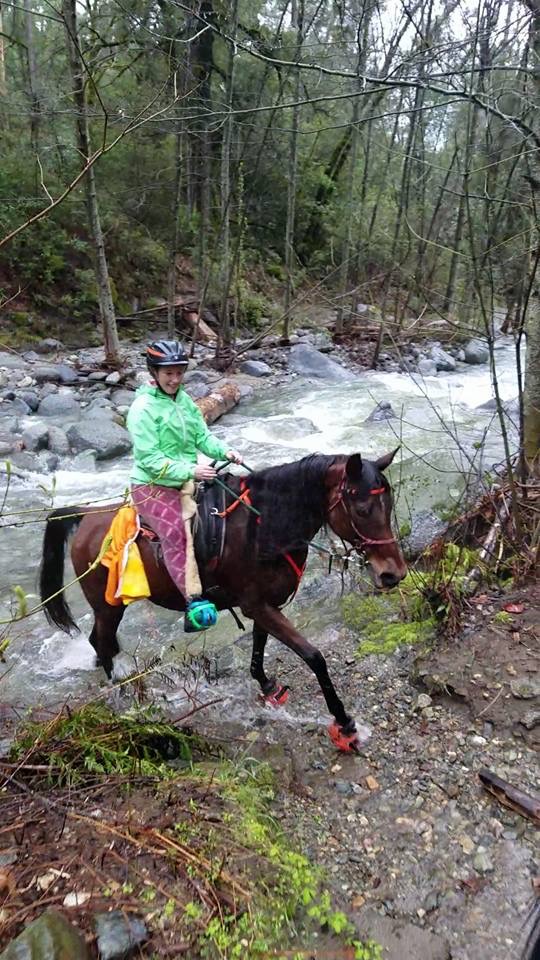 After one of the gnarly-est water crossings I’ve ever done and she NAILED it.

She was jaw-droppingly good not just physically (back on the Platinum performance CJ after being on hiatus during the evacuation, and like magic she’s back to slithering down hills without any hesitation or asking me to dismount)…but MENTALLY. 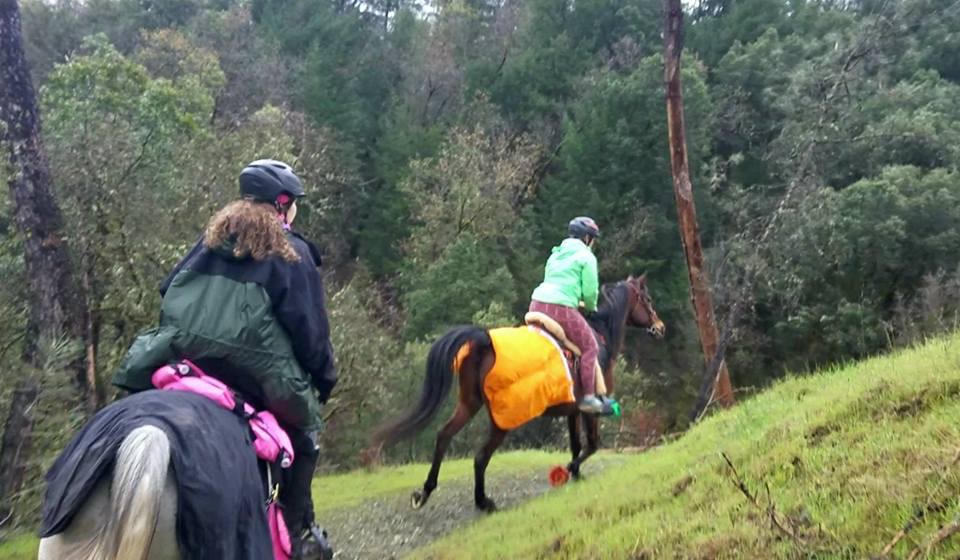 T* was our awesome trail guide. Many thanks to her for showing us her backyard.

Maybe her increasingly sulky attitude towards trails/work/life isn’t age or physical but rather boredom. 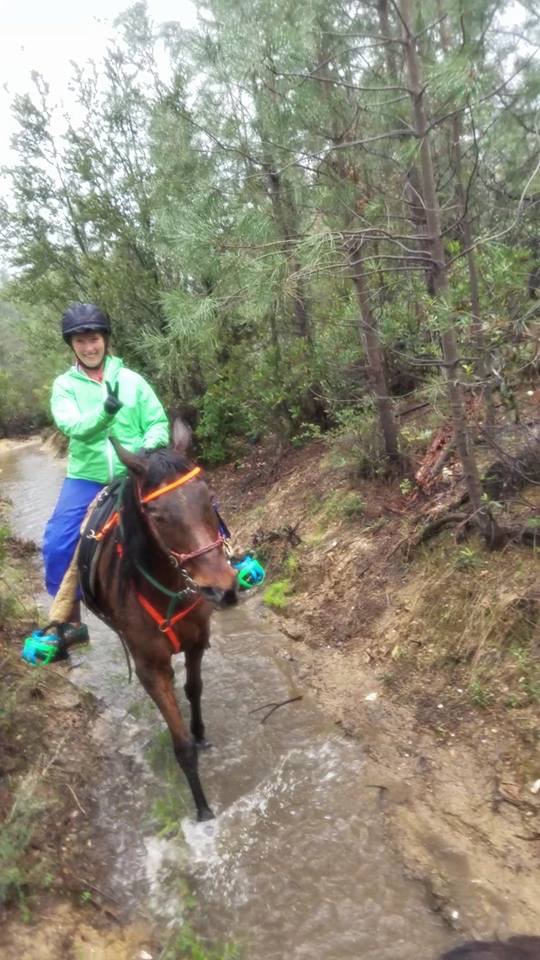 This is hands down one of my favorite pics of the ride. We were TROTTING through this water because the trail underneath had such good footing and the horses were giving us “dressage medium trot”. It was hysterical.

It’s not doing a helluva lot of good for me either. Long rides are increasingly a chore rather than a pleasure. I’m often bored and frustrated. I’m not even excited about upcoming rides.

I’m not done with endurance, I just need to stop doing the same rides over and over that I’ve done for the last decade. 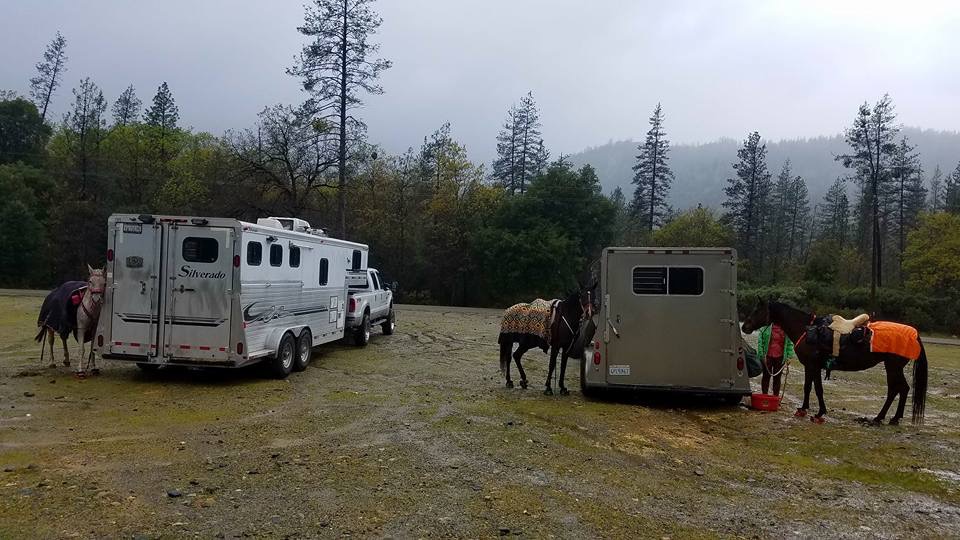 So….the focus of the upcoming year is rides and trails I’ve never done before.

Which means I said YES when a friend offered to host me and Farley the weekend of the cancelled Whiskeytown ride and do an unofficial 50 miler on his local trails. I think I’m going to call it the “Scotch Chaser Fat Ass 50 – Manton edition”.

It means I’m taking Wild West off my ride calendar – we’ve done that ride almost every year for the past 10 years – and I’m going to Gold Country instead.

I don’t have a clue if there will be another official 50 miler before Virginia City but in the meantime I have a feeling I’ll be going a lot longer in training than I usually do, on new trails and trails less travelled and saying yes to the many friends who have invited me in the past to come visit and check out their favorite trails.

I’m finally EXCITED. And I think Farley is too.

Here’s what we did in the first 3 weeks of the month before she went to mare camp:

The 2 longer, tough trail rides I did this month didn’t even scratch the surface of Farley’s current fitness (much to my surprise). I’m confident we are on track for the Virginia City 100 in September.

Running was hard in March.

Number one occurs a regular intervals in my training – at least every 12-18 months, especially if I’ve been doing a lot of double-digit races. So no surprise there. It’s not about the scenery….although that’s a nice bonus if I have the privilege of being on trail that day. It’s about the fact that for that particular day I am healthy enough and privileged enough to be able to lace up a pair of shoes and run even if I’m not being chased by something. Stop being such a snob about double-digit runs in beautiful places. 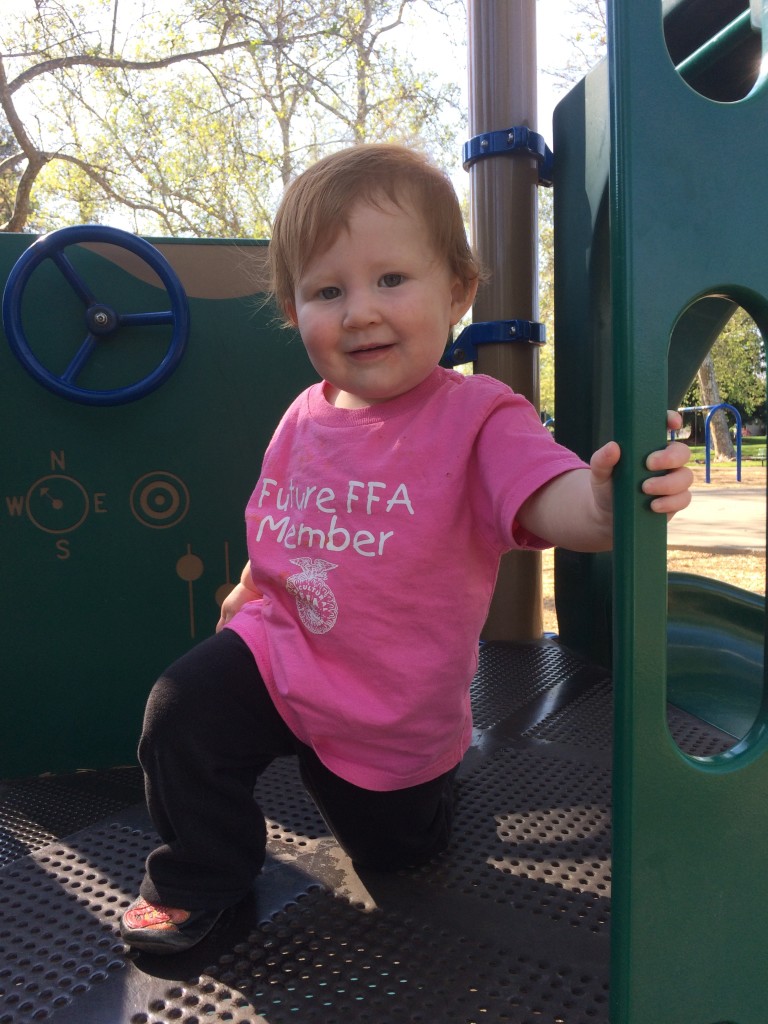 The second is harder to deal with. Long distance running is such a mental sport and if the mind isn’t in the game, it’s really hard to convince myself that continuing forward motion at a shuffle pace is worthy of my attention or time.

It’s like hitting the wall during a race and needing calories, but when you are in the middle of it, you can’t think logically and calories never occurs to you. But, the more you do it, the more you can recognize it for what it REALLY is. Eventually you can tell yourself “you are whiny and tired and want to drop and don’t feel like eating. EAT SOMETHING”

When I start feeling like my runs are just one more thing on my to-do list I’m forcing myself to do, I try to NOT just put my head down and “get it done”. I step back and I remember that the trail is my playground. That being on a long run in a beautiful place is as good as it gets and to have fun. I’m not doing this for anyone but myself. 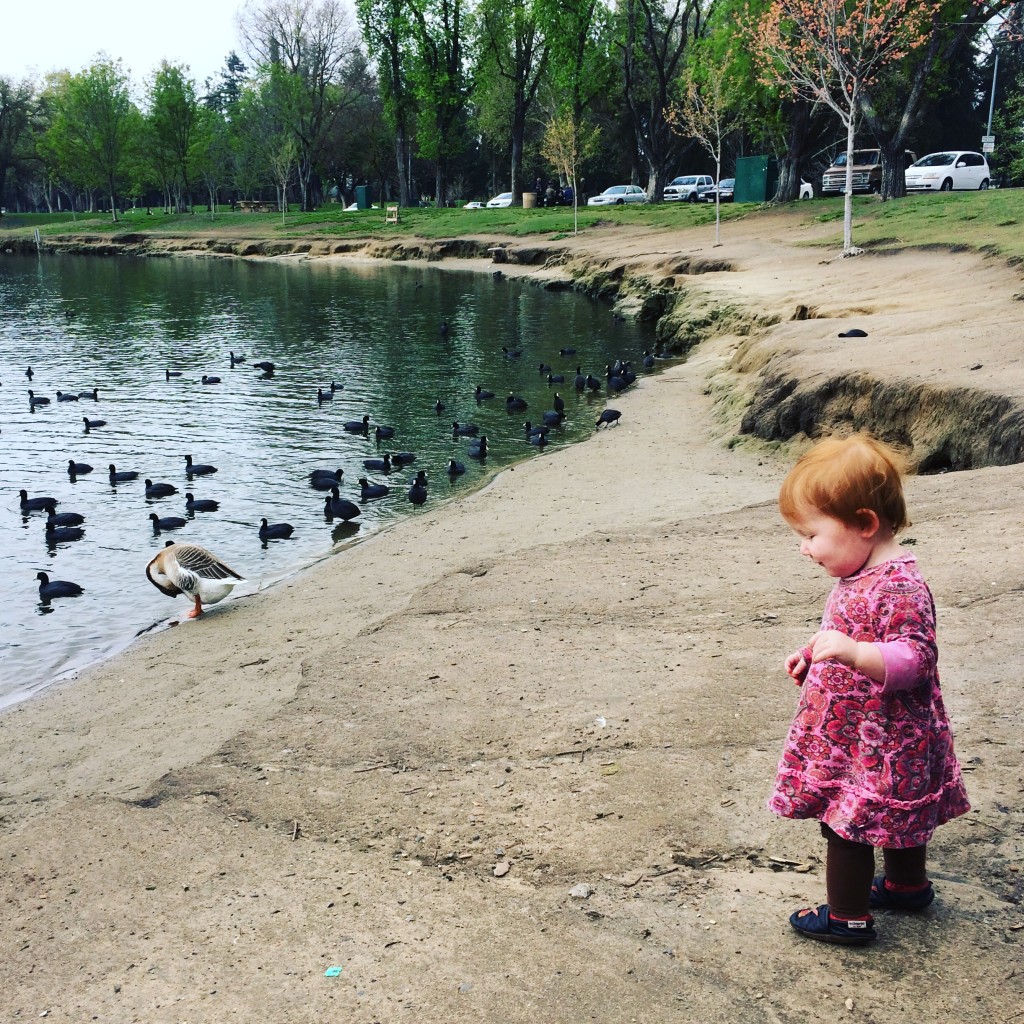 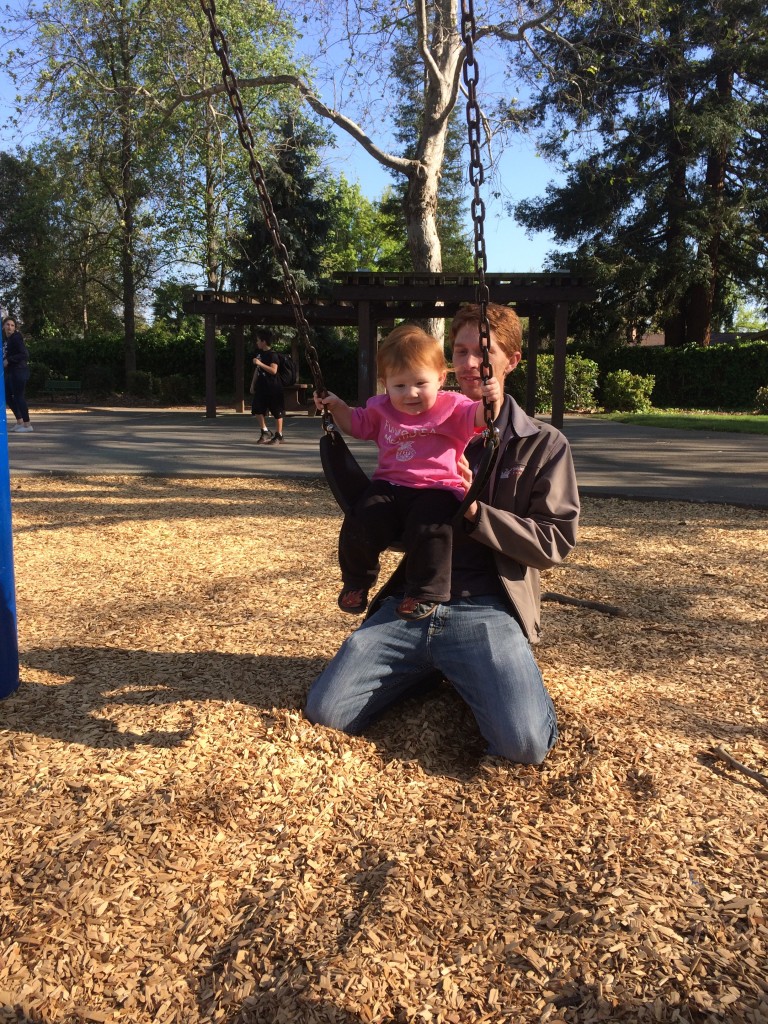 This week she decided she’s done with the baby swing and gets to use the regular swing. o_O

I have a 20 mile running adventure planned with a friend in April, I’m currently wait-listed at #18 for the Tahoe 50 mile in July, and I’m on the fence about doing the Ohlone 50K in May (but I’ll probably say yes and sign up).

Currently I feel like I’m on track for all these goals….even if Tahoe 50 has me a little nervous because of the elevation. Nervous and scared is good. It keeps me motivated to put in the quality runs.

As for other “playground adventures” I am contemplating a backpacking trip with Fig this summer. It would be so nice to get on the trail with a pack again. 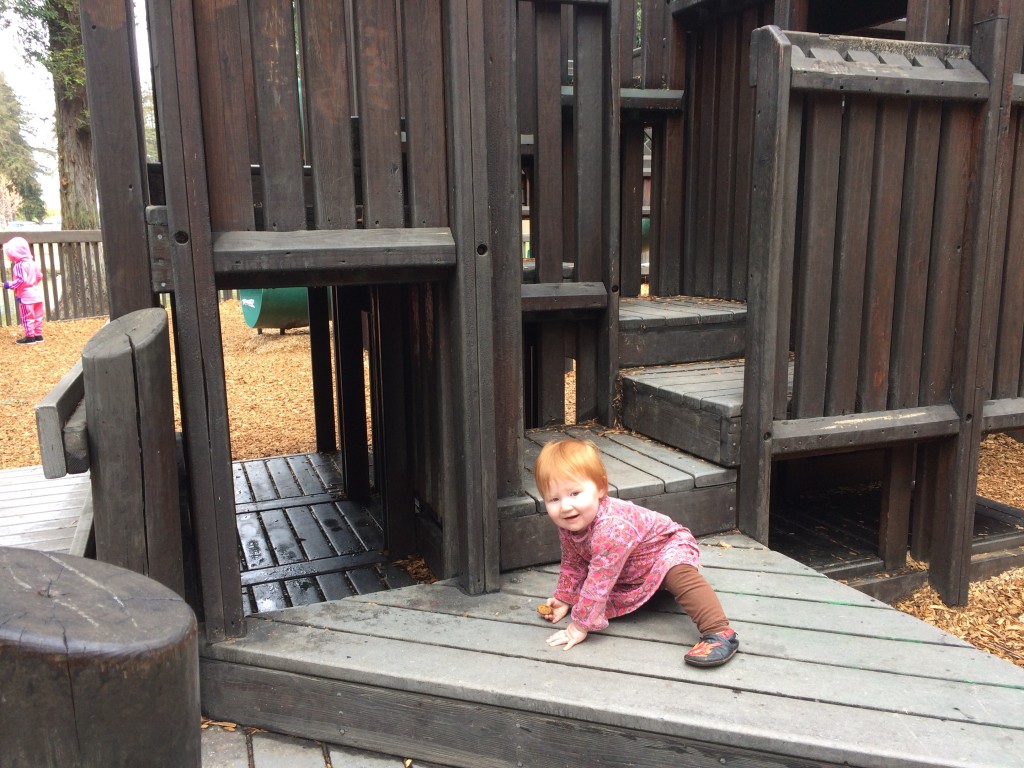 MerryLegs (the young one)

5-year-old MerryLegs came home from mare camp at the beginning of the week. She’s drop dead gorgeous and looking like something I’m excited to ride. 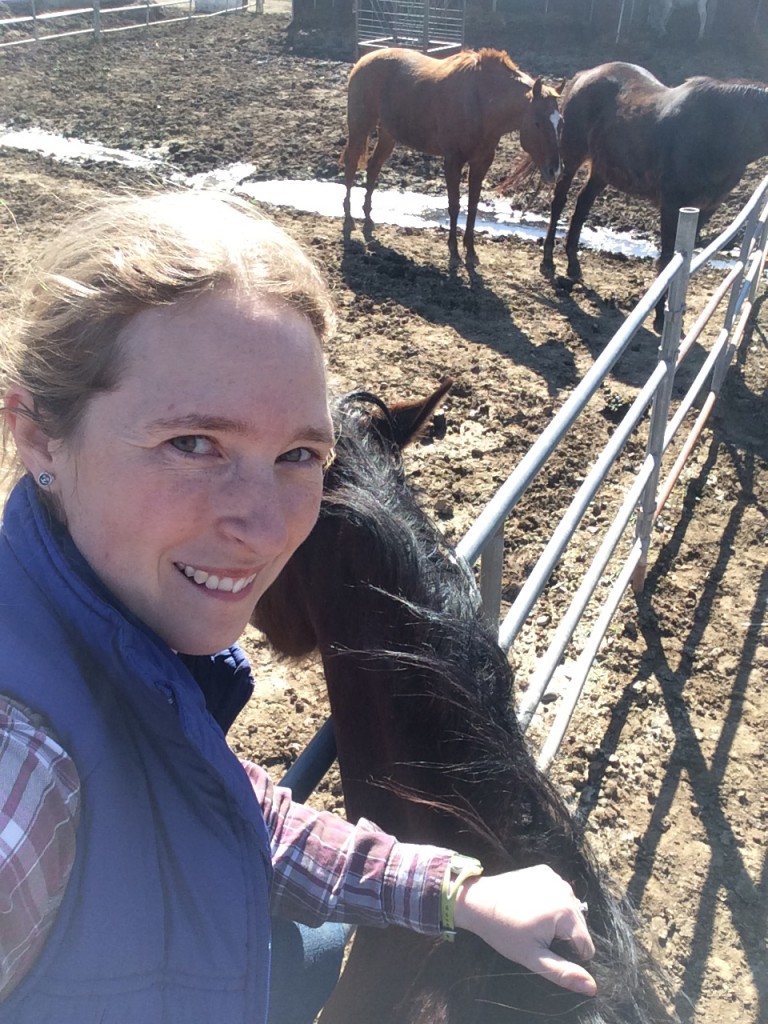 You’ll be happy to know I’m not actually on her back when I took this selfie. Safety first!

Looking forward to seeing what she has to offer for the next month or so before I switch the mares back.

If I being totally honest….I look forward to my sessions with ML more than Farley right now. ML is a challenge, a lot of fun, and has so much potential, even if some days (today….) I look at her cavorting around the arena and say “nope, not riding that thing today”.

Farley is fun to take out on a trail like Whiskeytown and RIDE. ML is fun on a day-to-day basis. 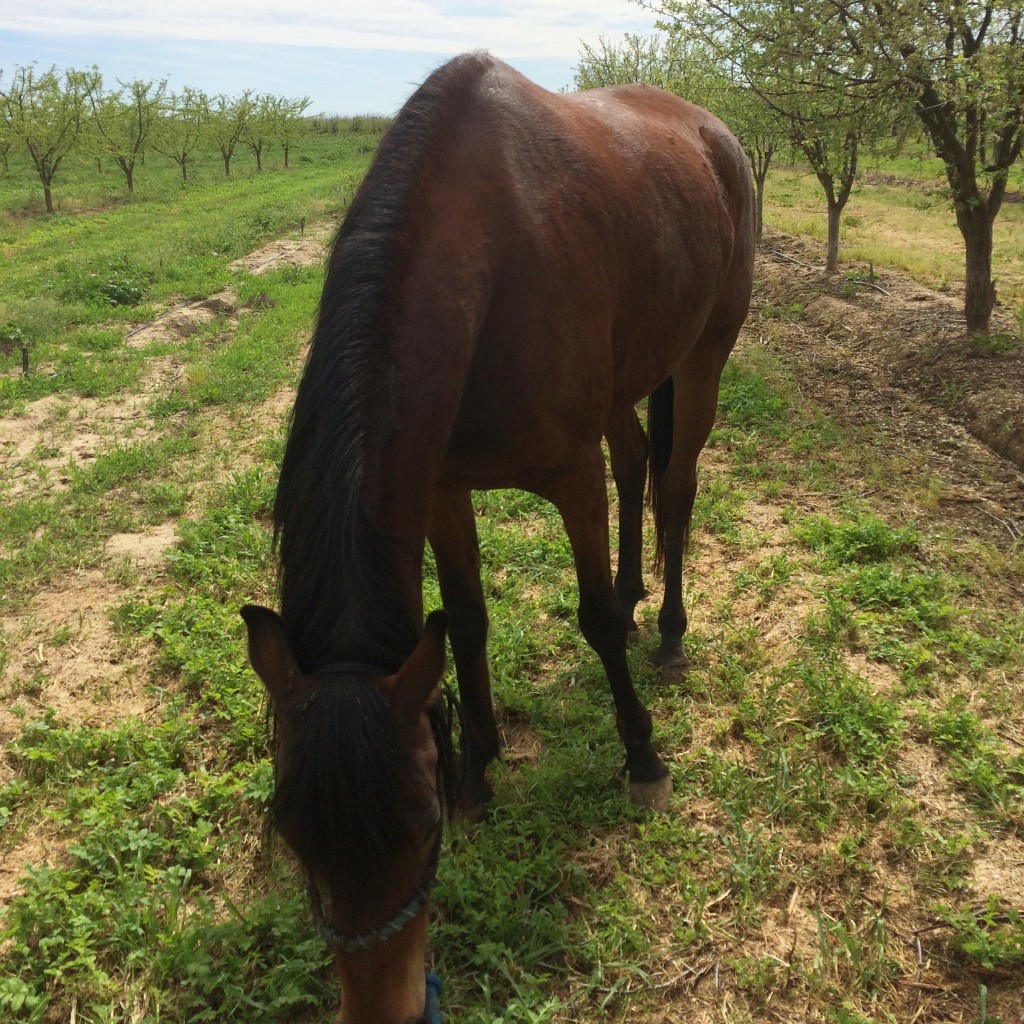 A Link Luv won’t be going out on the newsletter this month – too much running and riding and not enough reading this month ;).

One Response to March 2017 IRL