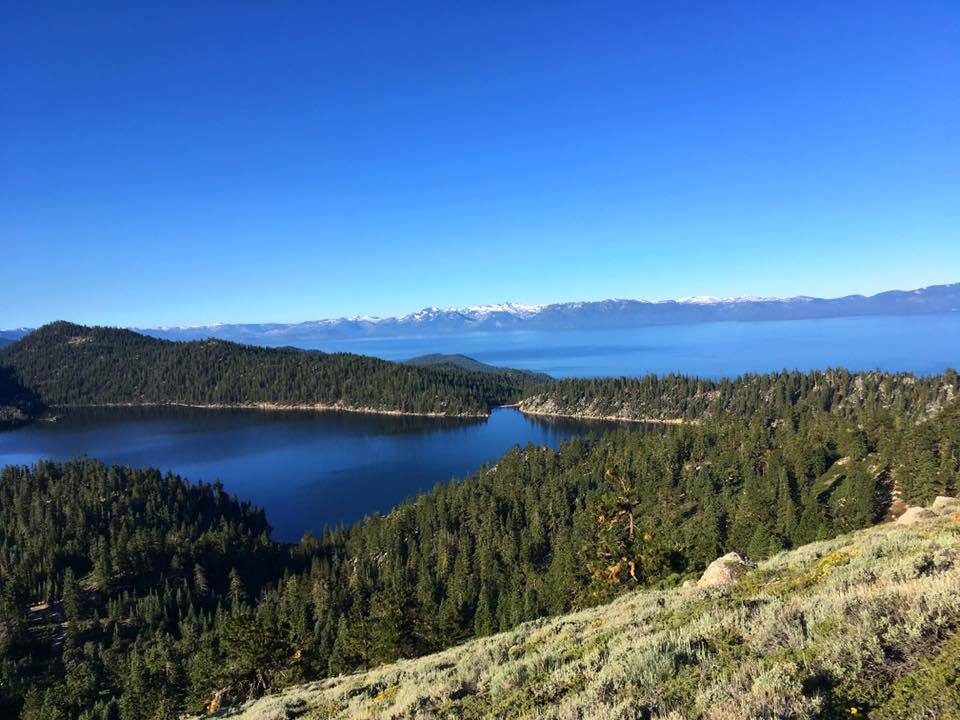 Three weeks ago I got an email letting me know that after MONTHS of being #14 on the wait list, I had a spot in the Tahoe 50 mile trail run if I wanted it. HELLZ YES!!!!!!! 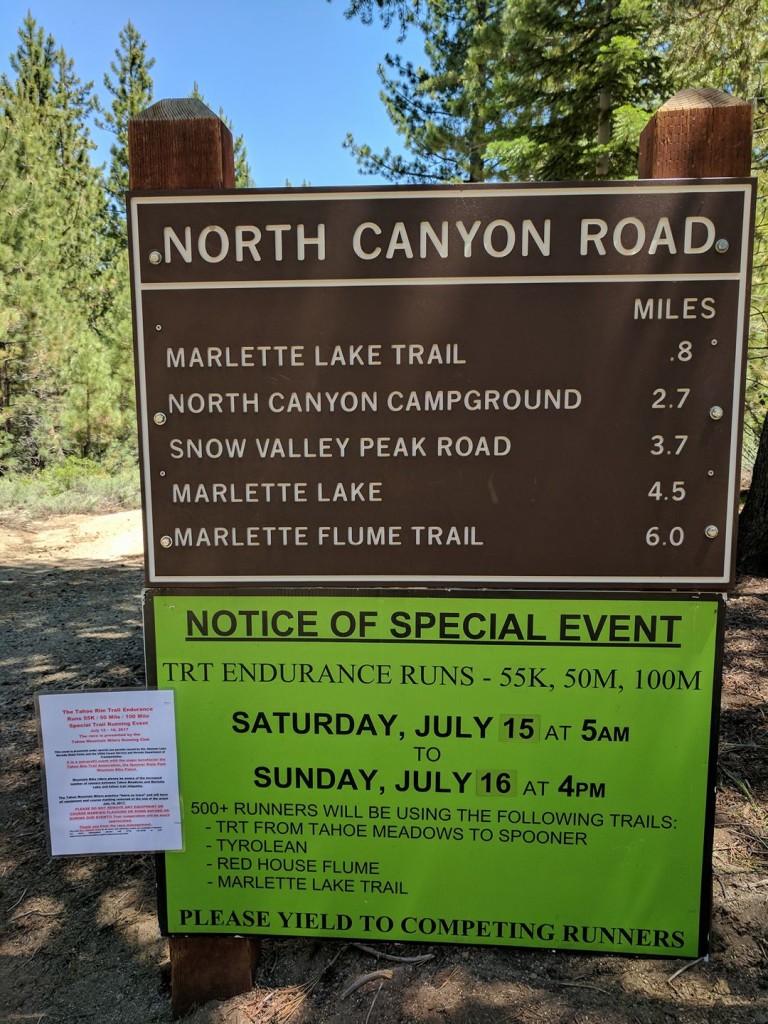 Because getting into a bucket race 3 weeks prior gives me plenty of time to Ummm…I mean do one long run (pacing WS100), start my taper (and a new job), and start begging favors from friends. Ummm…hi Cyd. Below is a picture that race management just posted about them marking trail for the run. Can I borrow your poles? 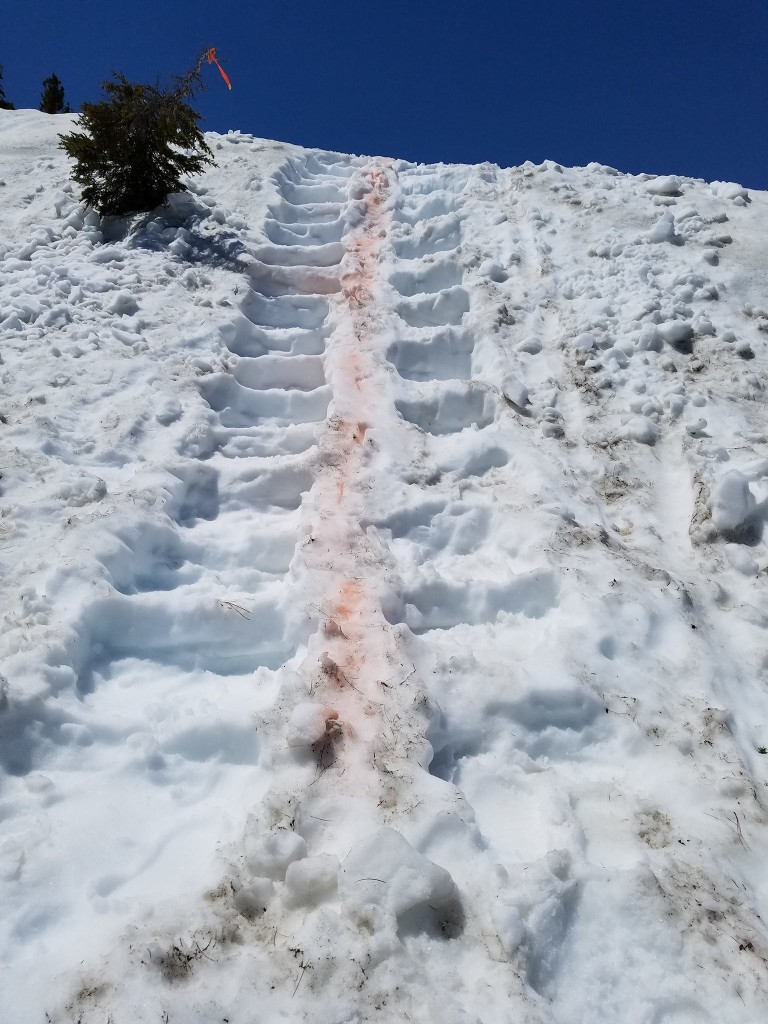 Oh hi endurance rider who is local to the race whom I met a month ago that I know is running the 55k at the race….so I got in. Lodging suggestions? Oh, your spare room? That would be *great*.  Against all logic, this was perhaps my best executed 50 mile race ever. Maybe my best ultra so far. This, despite minimal training, elevation far beyond what I thought my capacity was, and never having been on the trail before.

Look carefully at the left hand bar. Yes, that really is *9,000 ft* of elevation that the map is flirting with multiple times. I live at sea level.

I’m starting to notice a trend. Races that push me out of my comfort zone and scare me because I *know* I’m undertrained are my most wild successes. Why? I’m think it’s because when I show up to a race humble, ready to suffer but committed to seeing it through to the end – then I don’t take stupid shortcuts. I take care of myself, pay attention to the small details, and pace myself really carefully. Miraculously (or not….) it turns out this is the secret to a really good race. Maybe there’s something to be learned here. Note to self: Start the race very afraid. To up the fear factor, pick a hill in the second half of the race that you are really afraid of and then save yourself for that hill.

Having a 1500′ climb in under 2 miles in the afternoon on exposed hill side does make for cautious running in the first half! (and a huge confidence booster when you get to the top feeling good).

This is not an event where one *PRs, so I thought it was reasonable to assume I was probably capable of finishing around 15 hours which is about an hour longer than any other 50 miler I’ve run. But, I was so unsure how I would handle the conditions, I didn’t even bother putting that pace on my pace chart. Instead, I used 16.5 hours – the absolute maximum amount of time they allowed for finishing the race. *(PR = personal record, which is the fastest time you have run for a particular distance) My stated goals were: Feel good enough to enjoy every single one of the highly-lauded aid stations throughout the race and finish before cut offs.  And so that’s what I did. I mosey’ed along, happily noting that I was “beating” the expected time in each section compared to a 16.5 hour finish, looking at the scenery, encouraging fellow runners who were having a tough day, and enjoying the aid stations (“Can I have two of those smoothies? And stuff a bunch of your sandwiches into my ziplock for the trail?”). I kept my mental workload as low as possible and my physical effort matched to what was reasonable for where I was in the race – effortless and respectful in the beginning, harder near the end. I didn’t stress when I was in the congo line of runners doing 16 min miles for the first couple miles of the race. 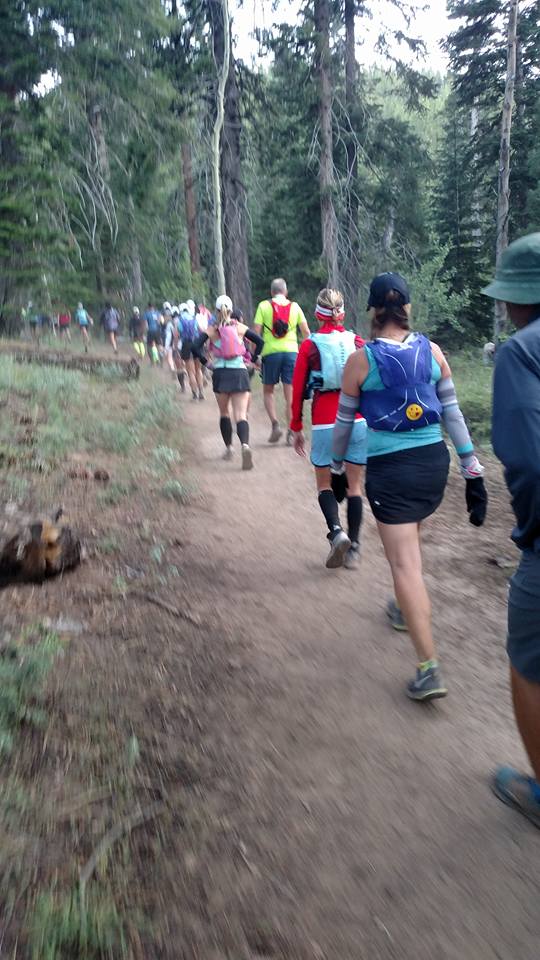 This picture and the first picture of this post courtesy of Courtney, who ran the 55k (and finished!), who was also my lovely host for the race.

When my brain tried to have an anxiety attack at 1pm because I was at a runnable section and my characteristic afternoon slump was happening and it was so much miserable mental work to run, I happily told my brain to chill out, it was OK to hike until 3pm  – and to my surprise I was able to happily run/walk down the trail after all.

I didn’t realize until after the race when I uploaded my GPS results how CONSISTENT my pace was all day using that race strategy. Ignoring the big hill at mile 30, I never slowed down and was able to accelerate for the last couple of miles. BINGO.

When the end of the race approached and the elevation got even higher and I was still running along happily I started doing quick math. Mmmmm…..5 miles to go and if I pushed it I COULD MAKE IT UNDER 15 HOURS!!!!!! GO GO GO GO GO. It was going to be close. Seconds. Maybe minutes. No time for the headlamp – finish before dark or bust!!!!!!!! Careening down the trail picking up my toes so I wouldn’t trip (it was errrr….sorta dark for the last 1/4 mile), telling myself whenever I faltered….this is what you train for. You train for the last miles. Nothing matters but the last 2 miles. You still have more to give, GIVE IT.  It’s hard to give away so much, the brain recoils for the thought of spending it’s last dime. But I pushed it to anyways. I managed to reach a blazing 9.5 min/mile pace on my way to the finish line. *rolling eyes*. *snicker* and darted under the finish arch just under 14 hours 55 minutes. 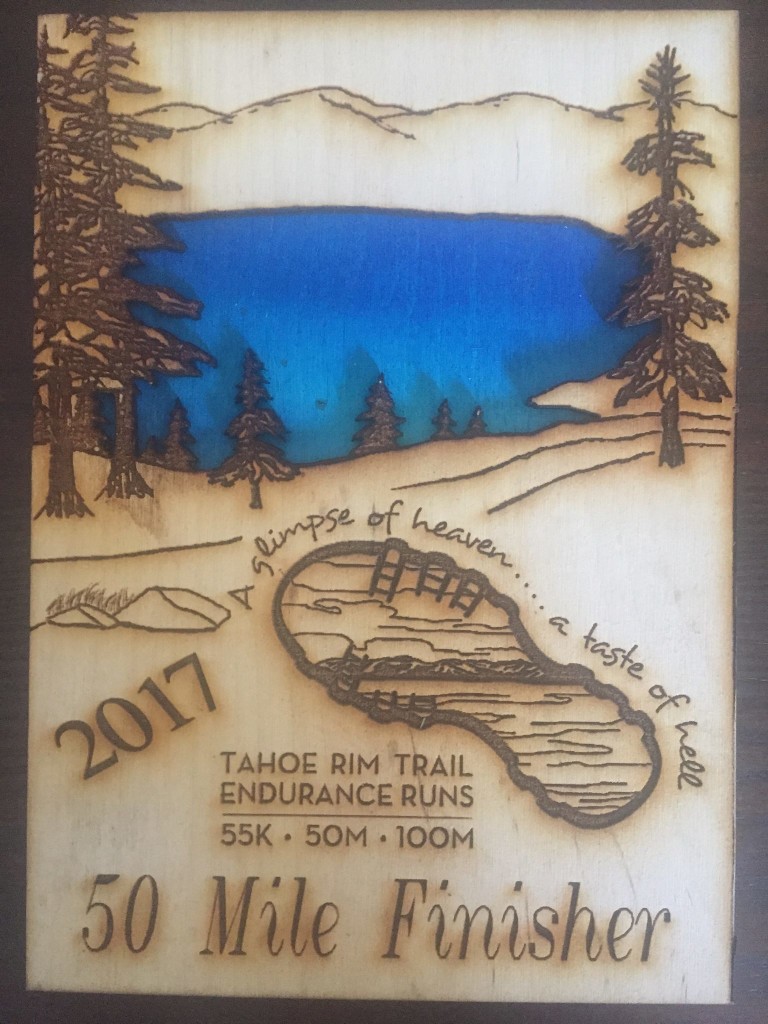 This is longer than usual because entertainment value of something short and sweet got beat out by documenting useful stuff for future Mel if she decides to do the 100 mile……I KNOW. It’s crazy. But I was sorta sad to not be doing a 2nd loop. I think with some training and a bit of luck, this is a doable 100 for me.

What went well (Glimpse of Heaven)

Cyd graciously lent me her Black Diamond Z-poles for this race. I tried them out on a 6 mile run a couple days pre-race with mixed results, then got on Youtube for some pointers. Managed to figure the basics out and use them to my advantage during the race. Keeping in mind I only have 56 miles worth of experience using poles, here’s my best tips and tricks for using the poles:

My first race with a GPS watch! It eliminated a lot of the math and complicated pace charts, but I managed the information carefully so it didn’t become a habit to check it constantly. It really helped me to manage my brain, have confidence in my pace, and kept me focused. Overall it was a win. I’m used to running according to estimated time between aid stations to judge pace on a regular watch, so I stuck with that strategy with the GPS. I focused on overall pace, *lap pace, and lap time. My pace chart I carry with me is based on the times to the next aid station. The “clock” resets between aid stations, so I only focus on one chunk of the race at a time. *lap = time/distance between aid stations I’m really glad I ran for such a long time without a GPS. It’s useful and I’m excited, but I’m a better runner for having run without it for a long time. I have a very good sense of pace and effort that I think I couldn’t have developed without running unplugged for a long time.

Part of the fun of ultras for me is adjusting to specific races. Running races isn’t a formula – “do things according to this algorithm and you will have an awesome race!” Instead it’s about considering how remote or urban a race is, how much support the management will give you, and any special considerations because of intrinsic trail factors, and then adjusting the plan. At Tahoe they went on and on about how good the aid stations are and how runners did NOT need to pack food in their drop bags. I decided to take them up on their offer. I brought food to get me to the first aid station….and that was it. No drop bags for me since food is what I mostly put in them, and the timing of drop bag drop off and pick up wasn’t compatible with my schedule. I’ve NEVER done a 50 without a drop bag. It was absolutely fine. They were as good as their word and the aid stations were AMAZING. Without the stress of finding my drop bag my time in the aid stations was more relaxed and fun. On average I spent ~4:45 min in each aid station

The elevation scared me a lot. A LOT. I’ve been day hiking and backpacking over 5,000′ a couple of times and every single time I get a headache the first day. I couldn’t afford that during this race. Here’s what I focused on.

Go ahead and give me an adulting award right now. I brought extra CLOTHES and SHOES and even baby wipes to clean myself off post race. No standing at the finish line shivering and miserable in my sweat encrusted stinking clothes. I was going to ENJOY my post race party. And I did. Thank you

Black Canyon for that life lesson…..

The number 1 reason that I’m sore post race is chafing.  I was really really REALLY serious about preventing chafing. I haven’t found the perfect solution but I got close last weekend. Biking “chamois” cream in the morning, and carried wipes with a silicone based antichafe that I applied at aid stations and any time I felt like any sort of hot spot was occurring. I still got a tiny bit of chafing by the end of the race (which is why it’s in this section – with as much attention to this issue, how the HELL did I still get chafing), but much improved from the past. The trail shorts I used were looser than usual so maybe part of the equation is shorts that are not so tight as to create compression, but not so loose they ride up or shift. Losing weight definitely helps, but I’m in the ball park of where I’ve been my entire life since junior high and it’s so difficult for me to lose weight and train for ultras. They are almost mutually exclusive for me, and running ultras is a lot more fun.

I apparently can’t remember to apply sunscreen to the back of my legs. Ever. Not in the morning, not when reapplying in the afternoon. Two days later, the sunburn on the backs of my knees and calves is the only significant discomfort post race.

After a marathon I get glorious naps. After a 100 miler, I get insomia. It’s a crap shoot for a 50 miler and after this race it was the the insomnia that visited. *sigh*. No glorious lazy naps or early bedtimes. Yet. I’m waiting for it to hit me like a ton of bricks. I might need to consider some melatonin post race in the future. 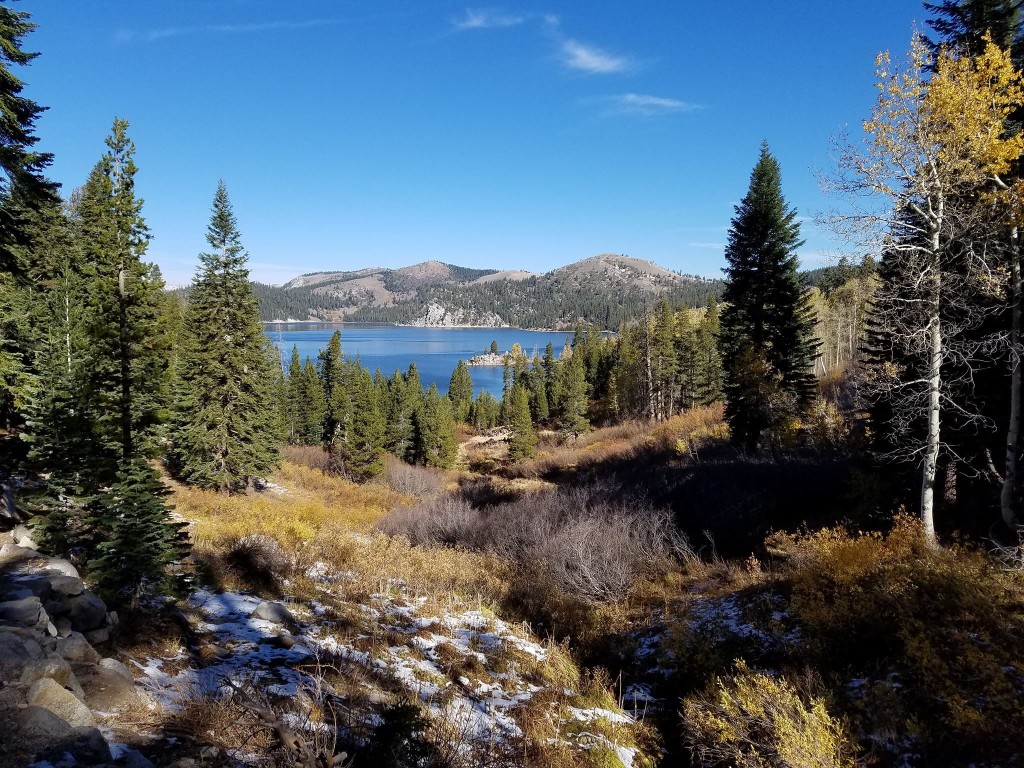 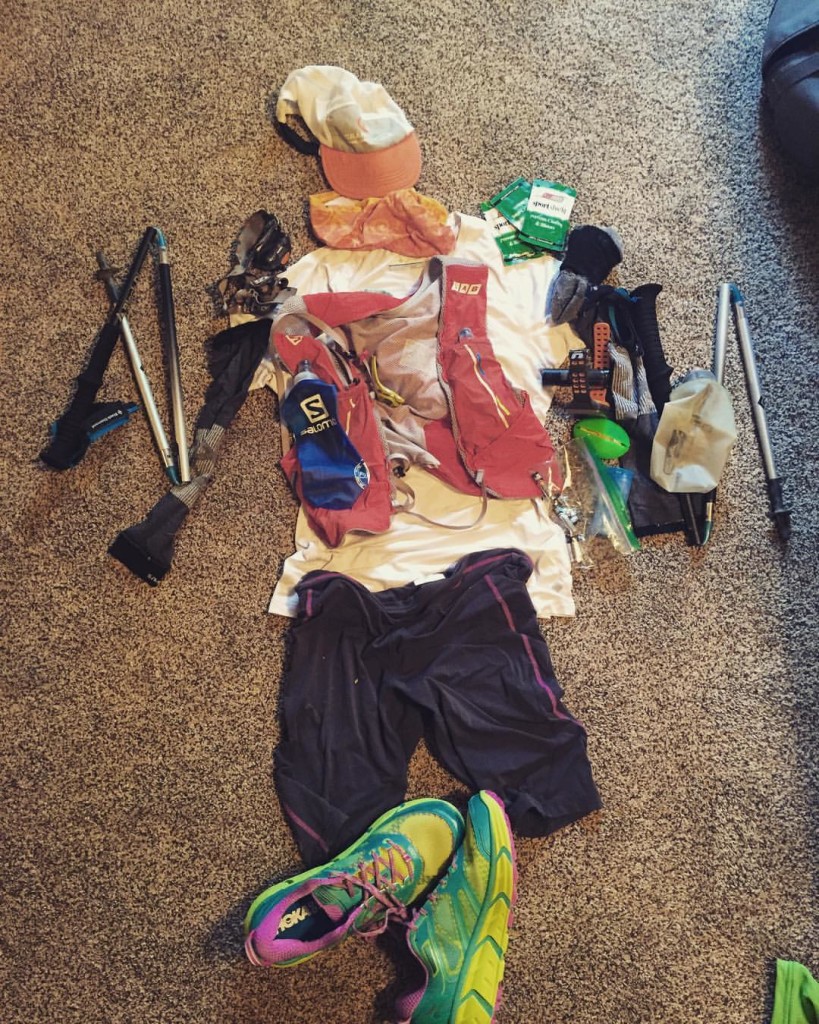 I ended up wearing a different shirt than pictured here, but other than that, this was my kit! Consumables

As usual if there are any questions, I’m more than happy to answer them. Ask me anything!