Home » Uncategorized » Are your safety chains the right length?

Are your safety chains the right length?

Fun fact about my boat trailer. The click-y thing on top of the hitch that locks the collar around the ball on my hitch can be down, pinned, and the mechanism inside the hitch can still be partially open.

Which I discovered while traveling at 55 mph downhill yesterday.

After sitting on the side of the road letting my heart rate go down I sent this picture to my best friends and asked, “should I blog this or does it just make me look like a dumb ass?????” 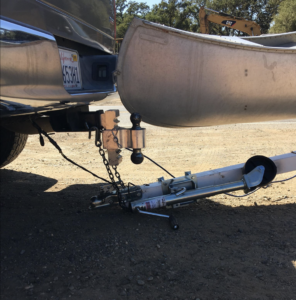 Note that while it’s in shadow and hard to see, the mechanism on top of the hitch is still down, and the pin is still in place.

What I think happened is while the mechanism was down “all the way,” there was still about 1/8″ more that it needed to go even further to have the internal collar completely locked down on the ball. I don’t pull this trailer much, so I didn’t catch it. When I hooked up the trailer I noticed that the ball hitch connection was a little tight, but I jostled it around and it seemed secure and the pin went in, so I figured that was normal for this trailer.  Mostly my husband uses this trailer, which is  a small jet-ski trailer we converted last year to haul kayaks. *yes, I was using the right ball size for this hitch. Valid question!

None of this is actually the learning lesson of this episode by the way. This is just background information that goes into the category of  “sh*t happens  even if you are careful and methodical” and I’m just stupid enough to post all these sorts of things in a public forum. In fact, I tend to publish every little scary trailer thing that happens to me here because trailering can go so very very very bad so very very very fast. I’m wincing right now just thinking about all the related posts that are going to show up at the end of this post as the algorithm combs through over 10 years of posts to present you, Dear Reader, with every trailering adventure on this blog. Sigh. I guess every time something happens to me trailering and no one dies, I count myself lucky and figure that sharing is more important than pride, just in case your imagination isn’t quite active enough.

Here’s the thing that I do want to make sure everyone does comes away from this post knowing. Ready for the PSA and the whole purpose of this post?

Wanna know why this wasn’t a complete effing disaster?

Because I had safety chains.

Because a couple months ago I told my husband that I refused to use that trailer unless the safety chains were the correct length.

So, rolling his eyes, he shortened them.

YOU DON’T NEED MILES OF CHAIN IN ORDER TO TURN YOUR TRAILER TIGHT. Go ahead, jack-knife your trailer. Shorten your chains to that length. I bet it’s a lot shorter than you thought.

Your chains MUST be short enough to keep your hitch off the ground if for some reason your hitch fails.

Likely, the reason this trailer came off the ball will never happen to you with a horse trailer. This little small trailer bounces like SOB over every little thing in the road. It’s literally trying to wrench itself off the ball at all times. It’s worse when it’s empty, and adding a hundred pounds or so of kayak and canoe doesn’t really fix it. My horse trailers are all much more tongue heavy and don’t bounce like this. They also go onto the ball more definitely than this trailer does.

But there are lots of other reasons that a hitch can fail, even if you do everything correctly.

A CHP officer once told me that the biggest violation he sees in towing is safety chain length, the second being the chains are not heavy-duty enough to handle the weight of the trailer. Yes, you can actually get cited for safety chains.

My preference would be to have the chains on this boat trailer even shorter. They don’t need to be this long to turn the trailer, but in the end, they did their purpose and held the trailer off the ground by mere millimeters, allowing me to pull safely over to the side of the road with no damage to my truck, trailer, or canoe.

*Fun fact. Canoes are a LOT harder to tie down than kayaks. I OBSESSED over getting it right and stopped multiple times to check the straps until I was sure it wasn’t going to move around on me. When this happened and the canoe was still on the trailer I figured I got a passing grade in that class. LOL.

Are safety chains infallible? Nope. Many years ago my husband was pulling a relative’s trailer with his brand new truck. He had owned the truck for a week. For some reason the hitch failed (I can’t remember why; I try my best to remember what my circus, my monkeys are and let others run their own big tops), the safety chains broke, and my husband stopped the boat by letting it go through his tailgate. Fun. Honestly, I think that’s why he’s never taken safety chains seriously since then. The one time he needed them, they didn’t do their job. Me? I’d rather have them and make sure I’m giving them a decent chance to do the right thing.

What does it feel like to have a trailer come off a hitch at speed?

I didn’t immediately realize what was wrong. I was going 55 mph down a local highway headed downhill (20, for those locals. Traveling from Grass Valley to Yuba City. I was almost to Smartsville). I slowed for some rumble strips (road construction happening) because, have I mentioned that the trailer bounces?  Then started accelerating again. The trailer is so small behind my truck that it is invisible except when I’m turning, but I can see the red flag flapping in the wind just barely in my rear view mirror. When I started to accelerate the flag did a really odd weaving side to side movement and the trailer didn’t feel right behind the truck – which is subtle since in all ways this trailer is invisible behind this truck (the boat trailer, even when loaded, is easy for me to move around by hand. The truck is a 3/4 ton dodge diesel. Complete overkill). I slowed and it stopped the weird movement. I accelerated again and the flag weaved again. I checked my side mirrors but I couldn’t see the trailer.

First thought: the trailer is weaving and trying to push me down hill…..only because when you pull trailers it’s something you always watch for, but with this truck/trailer/road condition/speed combination that’s RIDICULOUS, and since got better when I hit my brakes not worse, I moved on.

Second thought: Maybe I blew a tire? I’ve never blown a tire on a single axle trailer. Maybe this was it?

It seemed to like me braking the truck, so I put on my flashers and slowly braked my way into an upcoming left turn lane (my only option to get off the highway which has no shoulder and is windy at this point), pulled off on the shoulder and discovered what had happened.

It was a lot less dramatic than I imagined, probably because the trailer is very small. But also, I’m so anxious I do tend to imagine things being completely calamitous that end up being really manageable. For example, the thought of a blown out tire on my horse trailer really stressed me out until it actually happened. For those of you wondering, the scenario does not look like: tire blows on trailer on freeway–> instant painful death.

Don’t misunderstand me! This situation would have been so much worse with a heavier trailer! But, my mind tends to work like this: Something rather mundane happens–> I die in a fire-y ball of death. For example: I miss my train–> I die. It took me years to figure out that not everyone’s brain reacts like this. So, you can imagine how my brain feels about stuff like hitches failing, even on itty bitty trailers. What’s funny is it’s all in the anticipation. In the moment when everything is going to hell in a hand-basket I’m perfectly fine. Doesn’t this sound like a fun way to live? BTW, anxiety like this makes a career in veterinary medicine really….interesting.

Do I want this to every happen again? Nope. If it does, will I die as a nuclear-like explosion immediately occurs, wiping out life as I know it? Probably not.  Yay anxiety…..

Wanna know something REALLY weird? Like, more weird than the way my brain works?

I had a bouncy trailer, with a canoe that was moving around bit.

PEOPLE WERE TAILGATING ME.

The trailer is now behaving erratically behind the truck. The truck driver has realized something is terribly wrong. So, now they are driving with flashers on and moving into the left-hand turn lane.

Wanna know what my reaction would be as a driver following that train wreck?

MOVE THE HELL BACK.

What apparently the general population feels they should do: TAILGATE EVEN CLOSER.

Yes, the speed limit is 65 mph. I’m pulling a trailer so I have to go 55 mph. Yes, it’s a dinky small light trailer. Unfortunately, the CHP who will give me a ticket for speeding doesn’t make that distinction between that and horse trailers. Shrug. Pretend I’m a semi. That’s just the way it is and you are totally allowed to gripe about getting stuck behind a truck and trailer until the next passing lane comes up.

But then, when the trailer falls off the hitch, and so the truck carefully brakes for the FIFTY YARDS it takes to get off the highway, I would suggest that you break out the popcorn and enjoy the show, not get even more impatient. Sigh.

So. Check your safety chains. Shorten them. Replace them. Put retainers on the clips.

4 Responses to Are your safety chains the right length?