Home » Uncategorized » And so I ride

And so I ride

I’ve not had a good 24 hours. The sort of mood where you are angry at the world and life and situations, but not necessarily one person and you aren’t even angry in that frustrated way that causes you to take it out on other unsuspecting living things….but rather that anger that builds in the shoulders and the back of your neck that causes tenseness and an inability to focus or do something productive or do anything except angerily read the entire series of Percy Jackson and the Olympians series, out of order because you can’t GET them in order in ebooks from the library, so you read book 1, followed by books 3, 5, 4, 2. And it was still awesome. And tells me if I ever write a series, I need to be talented enough to write in such a way that my readers too can read my books out of order and they are still good and interesting.

But we are getting off the subject. This afternoon I decided enough was a enough and it was time to implement Mel’s 4 step plan to a better mood.

Note that this is the “BIG guns”. Steps 2 and 3 are ALWAYS appropriate as steps to a better mood. Steps 1 and 4 are only taken in dire need. And if too-frequent dire needs arise….then, well, a reassessment is in order. 🙂 (It’s been a while since 1 and 4 have been “trotted” out!)

I had a one hour drive until I was home. My choices were to stew in my own juices or indulge in something that would immediately start the endorphins flowing.  Popcorn is really really really high on my list of “foods I would live on if I could only chose one thing” and I discovered this beauty with Michele on our way to the Coolest Ride and Tie competition a couple weekends ago. It joins my other fav bagged popcorn (click here) for the times I can’t be at home to pop my own. Is eating something a good coping strategy?  Probably not.  Do I have a weight problem?  Nope. Last I checked I was down 13 pounds and have a very very good relationship with food. So chowing down an entire bag of this to jump start my “have a better afternoon plan” on the way home is something I am TOTALLY COOL WITH.

With the pony a mere 6 minutes away (if going *just* over the rural country highway speed limit), I wasn’t desperate enough to ride in jeans and cros branded fuzzy boots, so I stopped home to change into tights and riding shoes.

And….I decided to grab the camera and a couple more pieces of gear that I’m testing for my trail half marathon this weekend. I had initially thought I would tell you the results of my gear testing here (because they are riding relevant as well) but I’ll wait on that, since it seems my whining and verbose-ness is filling this post quite well.

I have no idea why the picture over exposed so much. The autosetting on my calendar decided that an ISO 80 was appropriate?  Me and the pony are cute. Tess is merely a brown splotch on the left side. Considering the effort it took for her to be a still-dog and not a dog-shaped comet speeding through the atmosphere at warp speed (because she was going on a RIDE), I decided not to push my luck.

Tess was at first upset that she wasn’t prominently visible in this photo until I pointed out that she got to share in step 1. (Tess would point out that I didn’t share nearly enough…) 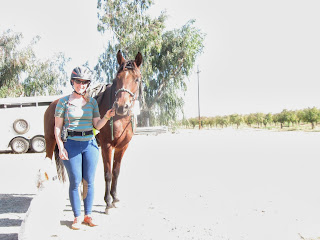 The plan was to get lots and lots of shots of the pretty fall colors by the river…..but my 4 GB storage card was mysteriously “full” after just 4 pictures. 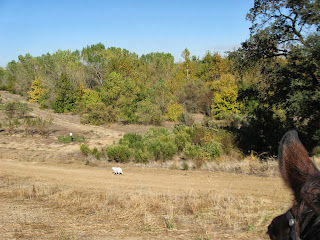 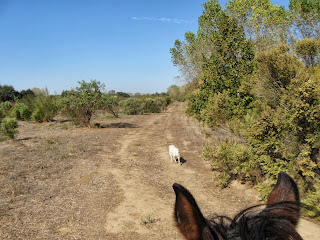 So instead we just galloped down this pretty little path at warp speed and avoided both smashing the white dog into smithereens (I explained to Farley that wasn’t a sporting way to win) or bucking me off (I explained that this too, was a cheater way to win. The only way to actually beat the white dog was for me to stay mounted AND for the white dog to have full possession of all her limbs when we crossed the finish line).

I must say that it is here in the process that I’m writing this post.  Mostly because I believe that steps 3-4 will take most of the evening, and along with finishing up some online assignments due tonight, and entertaining my Mother, the probability that this post will get written if I don’t do it RIGHT NOW are slim to none.

Here’s the plan for the rest of the evening.

This is dicey. The last couple runs I’ve done haven’t gone well. I’ve felt rather flat and icky. And with my half marathon coming up on Sunday, a bad run will only mentally psych me out…and even a good one, while it will be good for my MENTAL state, won’t actually help me physically, and might even harm my performance Sunday if I step wrong, or go too hard.  So…..I might go for a walk instead. But go in clothing and shoes that if I just *happen* to want to jump and go for a couple blocks I can.  Be fun. Be spontaneous. Be unplanned.

I tend to be a wine person.  A red wine person.  But my friend Nikki sometimes sends me home with this very excellent bottle of white wine that is sweet but oh so drinkable and delicious, even though it is the very opposite of what I typically drink. Michele and I polished off the last bottle at the RnT so there’s the benefit of it bringing back very nice sensory memories….

Here it is. (Ironstone Vineyard’s Obsession Symphony). Yes it’s white. Yes it’s sweet. Yes it has a screw off lid. BUT, against all odds, it is AWESOME. Even though I was drinking the 2010 or 2011 last weekend, having let it set for longer than I had intended. It was STILL AWESOMELY DRINKABLE. Can’t wait to pick up the 2012.  (BTW – another great wine that is available in supermarkets around here, that doesn’t break the bank but I know will be a great, drinkable wine if I’m going to event and don’t have something special sitting on the shelf is Gnarly Head’s Old Vine Zin).

And there’s always cider, or the rare beer, or even something herbal-y and gin-y.

Step 5: Cook or read something
Food and books. The 2 great pleasures in life that are NOT done outside or in bed. How can I go wrong with an ending to the day that involves one of these?

As for why I’m in a bad mood? The concrete thing I can point to is the fact that I just found out that the small animal externship I wanted to do up in Aarene’s area is not going to be approved. And the reasons it’s not going to be approved for totally suck and smack of politics and bureaucracy and represent everything I hate about small animal medicine, and if was a large animal practice instead of a small animal one it would be approved (and in fact, one of my equine externships that is exactly like this practice WAS approved). And I’m bitter and disheartened and frusterated and that is all mixed in with being really nervous about clinics, and the amount of money I owe and the fact I have a ride in FOUR WEEKS and should I do it or not?? and and and and and and and :).

You know, basically life and the good and bad it throws at you while you are lucky enough to live on this earth :).

8 Responses to And so I ride