Today we are going to evaluate a mix of human and horse first aid kits.  The kits are ACTUAL kits in use, NOT theoretical “best case scenario” kits.   I did not modify or evaluate the contents prior to blog in order to make them look better or worse……. 🙂

This post kept getting longer and longer….and longer so it’s been split into human and equine.  This post covers the human side.

Backpacking kit
Limitations: kit needs to be small and portable and light.

Scenarios:
-Reduce pain
-Stabilize major injury so I don’t die
-Make it possible for me to continue walking/hiking in less than optimal conditions
-Address more minor injuries so they don’t become major ones along the course of a trip
-Improve my chances of survival away from civilization, at a weight and size that means I will actually put the thing in my pack.

Because it is a backpacking kit, I do have some items that are more “survival” included that have functions beyond medical.  I think that is appropriate considering the goals of the kit.

In a ziplock
– mirror: for signalling, catching attention, and for looking for ticks and cactus spines in hidden places….
– small feminine pad/liner: for bandaging
– inhaler: because I’ve been in situations where I got into respiratory distress due to an exercise induced asthma, so this is worth it’s weight for me. True, it’s never happened during a backpacking trip (only after a 100 mile endurance ride) but it was scary and not fun, and I didn’t have an inhaler on hand.
– bandaids: mostly because I get bloody torn cuticles that could potentially get infected.
– Safety pins: can be sanitized and used as needles.
– wet fire: my emergency tinder
– crazy glue: to fix equipment and cracked skin/fingertips. Or stick a bandage on if I really needed to.
– matches: backup, in its own ziplock inside this ziplock.
– Sewing kit: 1 needle, one darning needle in a piece of closed cell foam with quilting thread, and waxed floss wound around.  I also have a suture needle with swagged on suture that I have removed from the packaging since it won’t be used in sterile situations.  This is stuck in the foam with the other needles.  The sewing kit is in general meant for repairing equipment and for improvising with equipment in an emergency, not for stitching anything biological.  Although one of my classmates pointing out I could ligate a vessel if needed, which is true.

All of this is placed in a small ditty sack that also contains
– Ace bandage: in it’s own ziplock to keep in clean, which will help it retain it’s stretchiness. This item has been used more than once, although not by me :).  It can be a day-saver for a hiker with knee pain that has to go down hill.
– Clot pack: small.  It was suggested to me by someone that has actually used these to make sure I got the type that is an actual pack, not powder.
– Medicine: Ibuprofen, anti-diarrhea, aspirin, benedryl, Vicodin in a small ziplock.   Total is about 1 oz.  (included in the 7oz figure above).

Optional: In the winter time I’ll carry a myler blanket (adds 1.5 ounces).  If I’m hiking by myself, backup water treatment (1 oz) is included.

Other thoughts: I’ve put a lot of thought into this kit and decided what is likely to be used, what can be used in the back country, what the capabilities are likely going to be of me and those around me in a situations, and worst case scenarios.  I’ve looked at other people’s kits and their rational for each item and then made some personal decisions.  There’s always room for improvement, but I comfortable with the kit right now.

Car kit
Limitations: kept under the seat of the car.  Gets hot in the summer, so anything in it has to be fairly heat stable.

I got this kit as a gift from my mother and I think this is one of the better kits out there.  I can picture me using most of the items, and I’ve been able to replace items as they have been used. 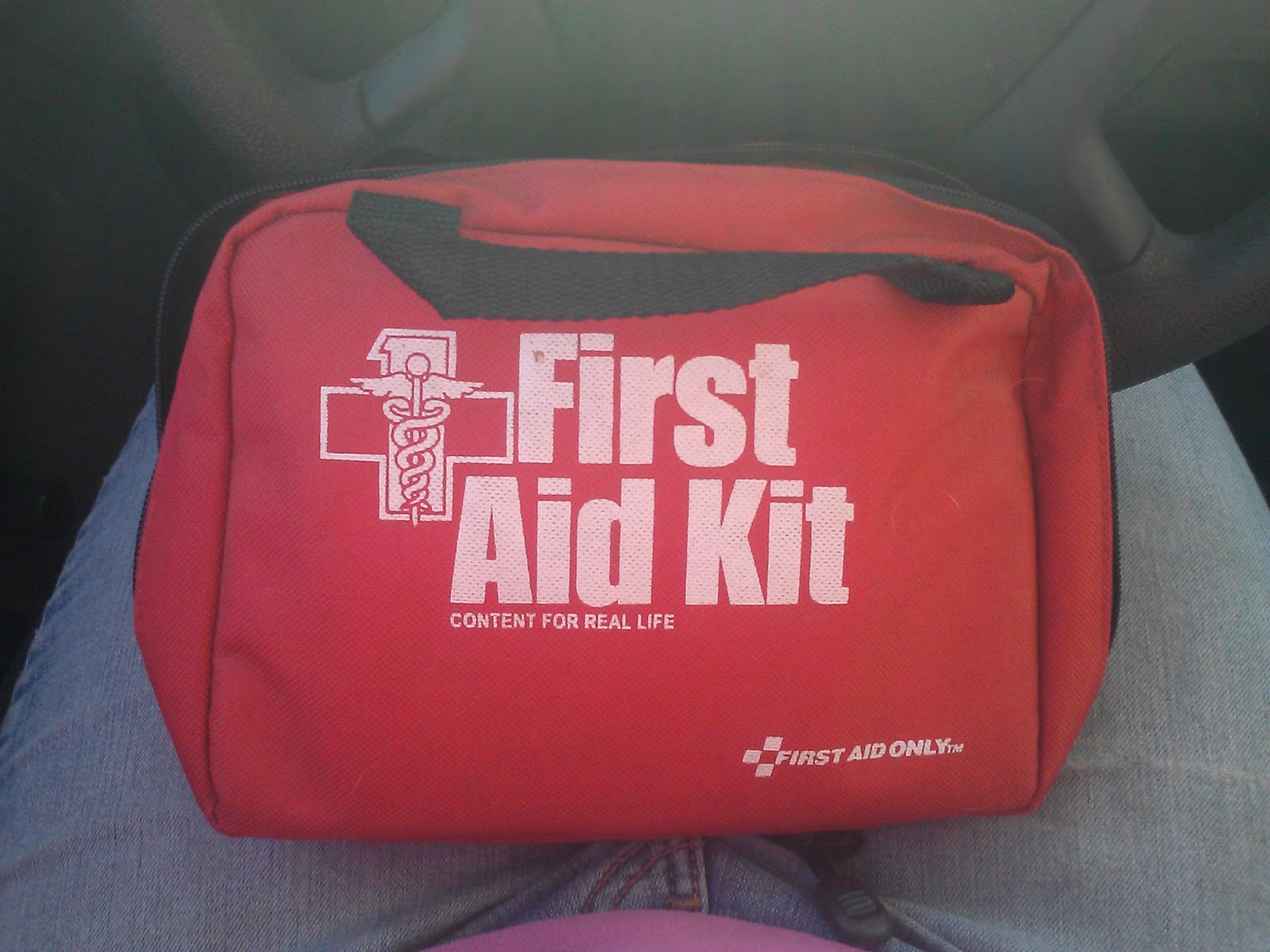 Nice compact kit that lives under my seat 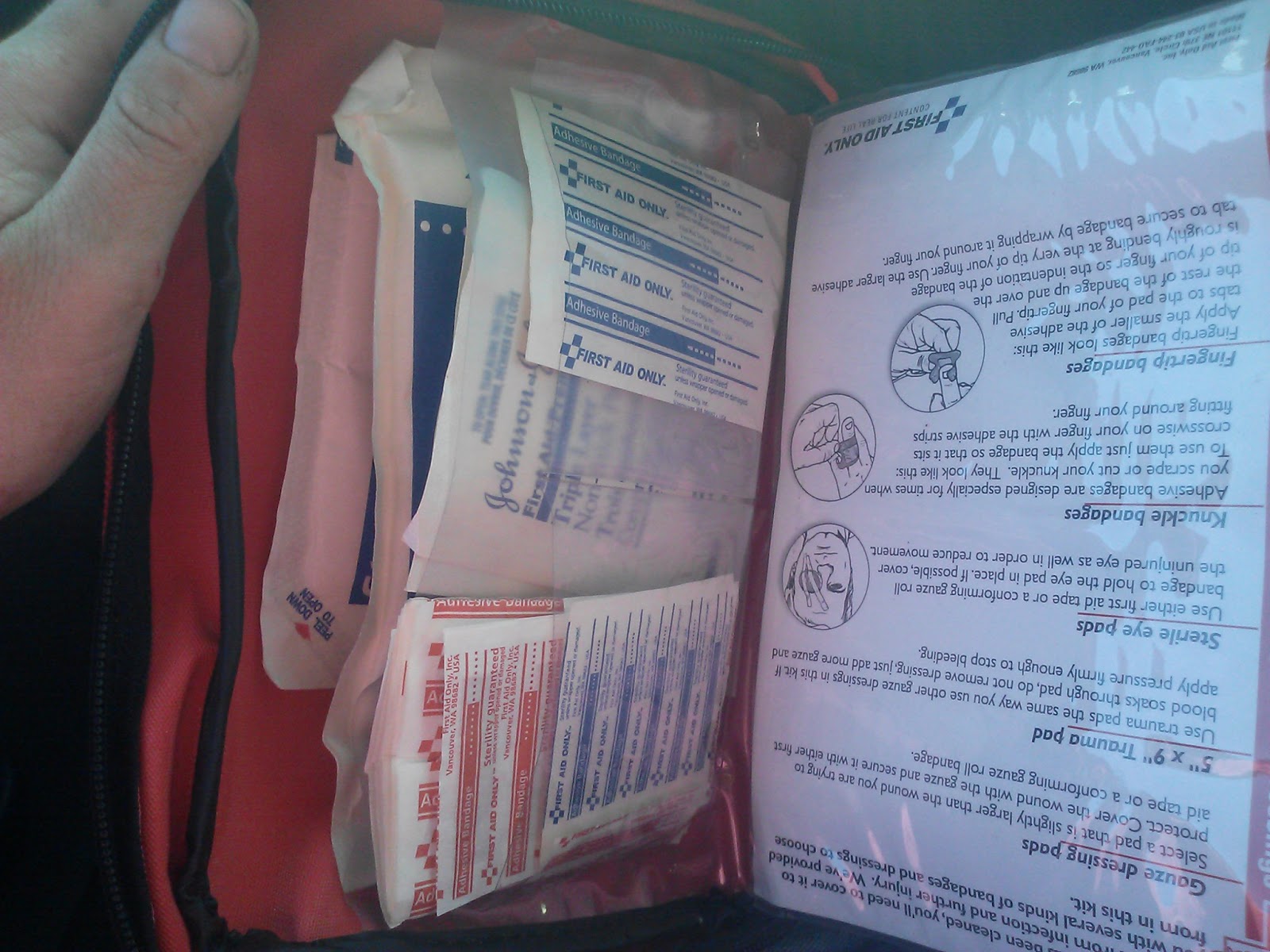 An assortment of bandaids and gauze bandaging and teflon etc.  I think feminine pads+ace bandage make better emergency bandages than dealing with a teflon pad that is always too small and tape that won’t stick, HOWEVER from this assortment I’ve been able to deal with bleeding cuticles, cracked finger tips, minor cuts, seeping poison oak patches etc. 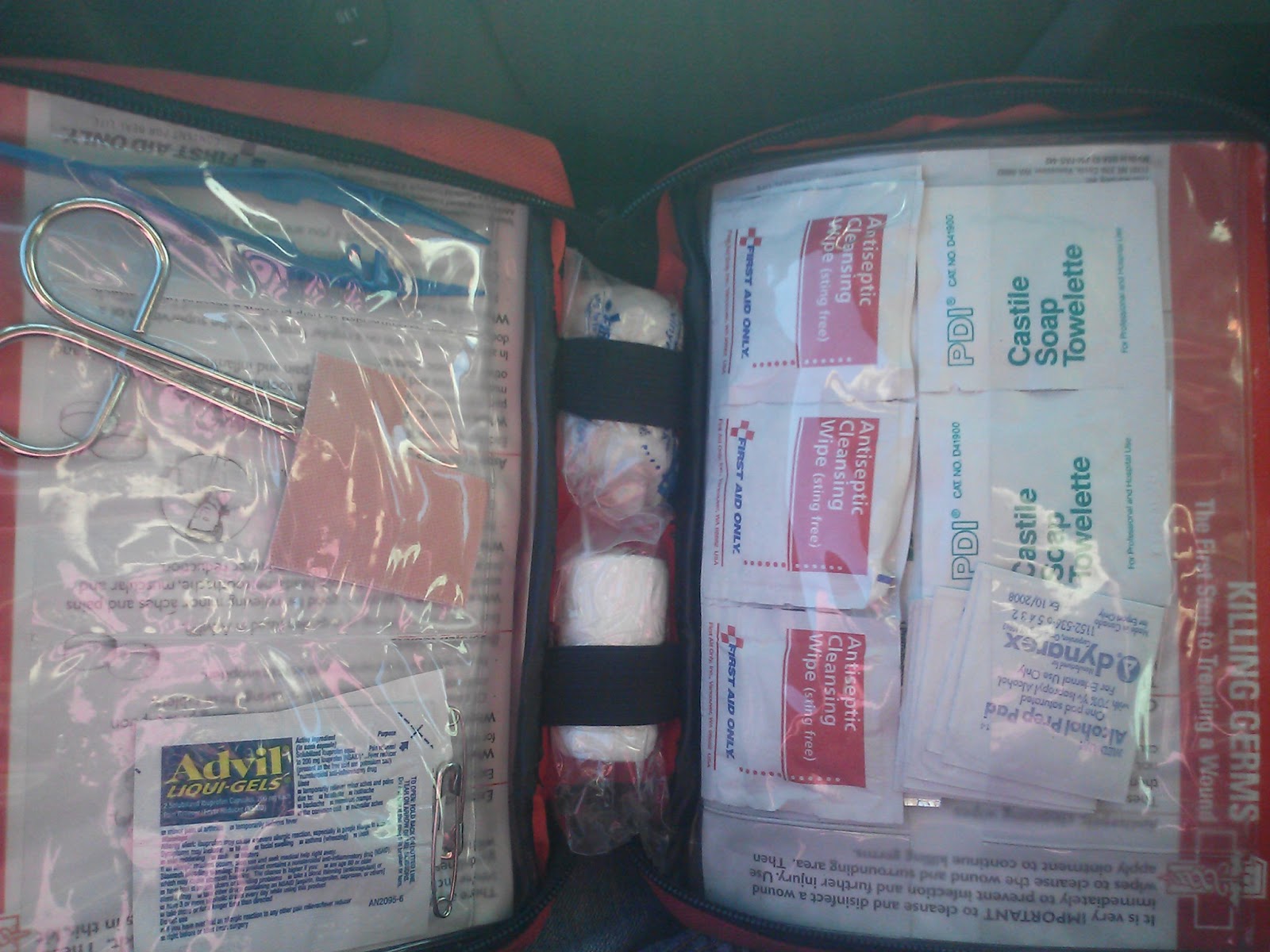 Packs of Advil and Tylenol.  As I’ve used the meds I’ve replaced them with the similar packets because they are clearly labeled with doses and directions. Repackaging pills from larger bottles, would be cheaper, but I would lose the ability to toss this kit at someone that needed something from it and have everything be self explanatory and for them to be confident in what the pills were, expiration dates, storage conditions in the packaging etc.  This isn’t my primary “go to” location for meds when I’m away from home.  I carry a separate, small “kit” with me in my backpack that contains NSAIDs etc for my personal use in a small altoids tin

I’ve added moleskin to the kit – holds up better than duct tape in the heat and can help protect a wound like a blister from further damage.

Scissors and forceps.  Both are pretty useless.  Scissors aren’t sharp enough, forceps aren’t pointy enough. The Scissors will work OK if needed.  Although a good knife and a needle would do everything that even better. 🙂

Gloves.  NOT sterile.  Good for human medicine where there might be blood.  But don’t put them on and think that you can now touch stuff that you couldn’t with your barehands because you are somehow “cleaner”.  Because you aren’t.

LOTS of little cleaning wipes.  Remember that the alcohol ones are useful for sanitizing hands etc.  The soap ones are good for cleaning wounds.  Don’t use peroxide and alcohol to clean wounds!!!!!  Soap and water.  Even just copious amounts of water if you don’t have soap is better than alcohol! 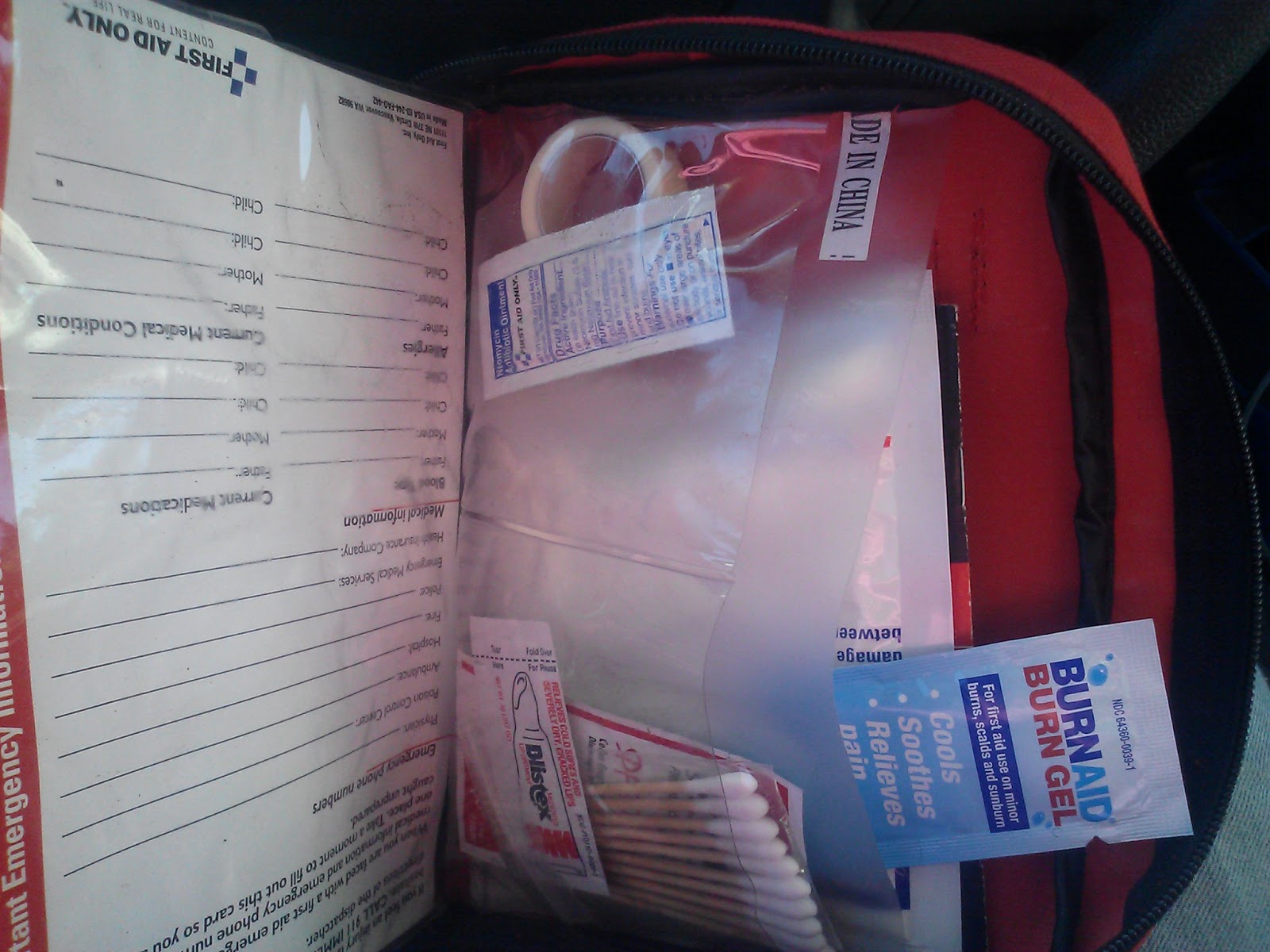 A roll of tape – that will never stick to what it needs to stick to.  I promise

Neosporin – the packets are great!  Except when you only use half and want to save the rest for later.  Than it leaks all over your kit.  Better to just buy a small tube and leave in here IMO

Blistex packet – I don’t use lip balm often but if someone was desprete maybe this would be a nice thing to have – but if I use it out of the kit I probably won’t replace it.

Packet of sunscreen – Same situation as the lip stuff.

Burn gel: Same as the sunscreen and blistex packet.  Nice for it to be there, but not integral to the kit and won’t replace if it gets used.

Cold compress: YES!!!!!  Now here is something truly useful that I would totally use (and replace) as necessary.

Other Thoughts:
After reviewing this kits, one thing that this kit does NOT address that would probably be useful is the ability to stabilize a more major wound well enough that further medical attention can be sought.  This kit does not contain compression bandages, a clot pack, or any “wrapping” type bandages needed for more major injuries.  This is truly a minor injury kit that meets my stated goals – which are reasonable for the types of things I will encounter in my day to day life associated with my vehicle. Adding stuff to this kit would add bulk and size and increase the chances that I wouldn’t take it with me – I swap this kit between vehicles that I drive so that I’m maintaining a minimum of kits.  Having to maintain a kit for each vehicle instead of just one is something that would fall under the “good intentions” category, but wouldn’t actually happen…..

In general, it’s a good, useful kit that doesn’t go overboard and stuff that I will never need (and thus cluttering up the kit and keeping me from being able to find stuff), that has a few “fluff” items.  It would be frusterating to deal with a major injury with this kit, BUT it does it’s job well if you stick with the intended goals of the kit – make everyday life a bit easier and less painful when you are less prepared than you ought to be.

For the purposes of this discussion, I decided to use an REI kit.  I tried to find a mid-level kit that wasn’t too over the top, but also put some serious thought into treating something beyond minor cuts and bruises.

I settled on this one, which is designed for 4 people over a 5 day trip

Here are the contents with my comments

Horse kit is coming – but I actually need to go to the stable and see what is in my kit.  I can’t cheat by just trying to remember – the point of the post is to do actuals, not what I think is there or the “ideal”.

I hope none of my meds are expired.  That would be embarrassing…..

One Response to What’s in a first aid kit – Human