Home » Uncategorized » Help! I’ve broken my brain and I don’t want to fix it!

Help! I’ve broken my brain and I don’t want to fix it!

On Friday, going for a run after clinics was like pulling teeth.

You know, the feeling I expect *most* of us feel when we’ve been on our feet for 10 hours combined with mashing facts and concepts into the grey matter like stuffing cabbage in a mason jar for home fermentation.

I did manage to drag myself out doors – barely.  I did manage to plod down the street in a barely competent manner – a fact not unnoticed by motorists who decided I did not look like a focused runner who would blow them off if asked for directions.

The good news is that since having lived in Davis 3 separate times over my life – sometimes with and sometimes without a vehicle – I know my way around pretty good.

The bad news is that I have dyslexia. 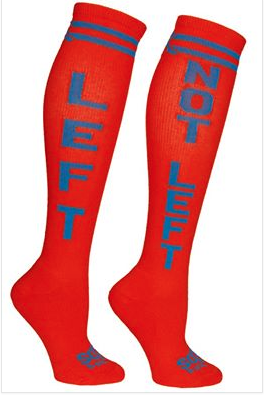 ***”Oh, does that mean you flip words and stuff around and can’t read very well?”

Umm….kinda…..but that’s sorta like summing up depression as “you are sad all the time?” or imposter syndrome as “you are a perfectionist?” or ADHD as “you just can’t focus and you are hyperactive?“.

As my boyfriend likes to tell me when I’ve said something silly, not so much.

The most glaring problem about me giving directions to the poor unsuspecting passing motorists is that terms like “left” and “right” are completely meaningless to me.  Intellectually I know that one term is used for things on one side of my body and the other for the opposite. I know when people use those terms they mean that when I face a certain direction that means the object will be on one side of my body or the other.  Practically the terms are of no use to me.  People seem to think it’s because I can’t remember which is my left and which is my right. They invariably say “oh but when you form an ‘L’ with your thumb and fingers your left hand is the one that forms the correct L!”. Except when *I* do that I can’t remember which is the correct L because they both look right to me.

I have 2 coping strategies

1. I wear a watch on my left hand.  I have memorized from an early age that the watch is on the left hand.  The problem is if I don’t wear a watch, I go back to being completely befuddled.

2. I rely on other types of orienteering directions that don’t change as I move my body or flip stuff in my mind. Like N, S, E, W.  It doesn’t come naturally to me, but once I realized I can always picture where the sun is coming up, I realized I had a point of reference that was independent. The problem?  It seems like very few people are comfortable with N/S/E/W, especially women.

After being stopped for the 3rd time to provide guidance and me desperately trying to speak the language of left and right by waving my arms I decided my run was over and walked back to campus.

This was the last time I felt normal.

No, I’m not talking about my dyslexia.

I’m talking running and it’s proper place in ones life.

I’m pretty sure that the proper place of running is as an activity that is done 3-4x a week under reasonable weather and physiological conditions.

On Sunday the Friday running doldrums had passed and I was looking forward to my 2 hour run with an eagerness that only the term “crazy” can apply.

Because getting to Davis in time to be available for on-call was a lot effort, I couldn’t be bothered with breakfast.

A FASTED run in the heat of the day, with planned non-refueling except for water for the 2 hour duration.

We got ‘er done with me reaching the appropriate stage of whiny at the almost 2 hour mark (whiny and unfueled enough that I misread my watch as 2 hours approximately 10 min early. BUMMER!).

So far this seems completely normal right? Planned for a long run, took advantage of a pre-fatigued situation, mission accomplished, just in time for an afternoon of R&R.

Here’s where it gets weird.

At 5p I got called in for an emergency colic and was on my feet running around for 4 1/2 hours.

And….at 9:31pm. I decided it was an EXCELLENT time for another run. After all, running on fatigued feet on a full stomach as a “2 in 24” would be an EXCELLENT training opportunity.

I forced the Bad Idea Fairy (E101) down and went to sleep in the back of my car instead.

My first thought at waking up at 5a was that this was an EXCELLENT time for a another run!!!!  After all, sleeping in the back of a Corolla where I’m forced to spend most of the night in a fetal position, with another 12 hour day ahead of me does seem like ultramarathon training material.

Now are you beginning to see the craziness?

Where does it end? Stay up all night and eagerly devour library books under the guise that a run on 2 hours of sleep will somehow make it easier to do so at the end of a 100 mile ride or run? Justify not packing a lunch for the day because of the positive mental training? 2 runs in a day? 3 or 4 runs in a day?  My brain is broken and I sorta like it.

Farley is just glad the craziness does not involve her for once.

***In case you are interested in one person’s perspective on dyslexia beyond “grade school child that has problems with reading”, here’s my experience.

I actually don’t have a problem reading.  Words look like little pictures to me, so I tend to look at the whole word and get it’s “impression” – it doesn’t matter what the exact letters are.  It’s why I often don’t remember the names of characters that I read in books – they aren’t actual words to me – they are “word pictures” on the page that I recognize in the contex of the story, but aren’t something I ever looked at and tried to verbalize. I have a hard time pronouncing words I don’t use in every day language even though I can “see” the word in my mind and I know what it means and how to use it in context – but because I can only see the “whole” word, I can’t “sound it out” and converting that word picture to spoken language is difficult.  My saving grace is that because I think in pictures (whether real pictures, or “word” pictures) I have a photographic memory for some stuff – primarily numbers. I have to be careful because I have a tendency to flip my 9’s and 6’s and my 1’s and 7’s for example – but if a question is asked that has a numerical answer (what is the average tidal volume of an animal), I can usually see the number in my head even if I only saw it once on a slide.

There’s an advantage to my dyslexia – I’m really good at manipulating objects in my mind in “3-d” even if they are “2-D” on a piece of paper.  Since “right” and “left” don’t mean anything, it’s actual orientation on the paper, or as a physical object in front of me doesn’t mean anything either and I can “imagine” it turned, flipped etc.

3 Responses to Help! I’ve broken my brain and I don’t want to fix it!