There is a particular magic in a DNF.

A pull can focus training and efforts in the right direction and result in success the next time.

It can create some of the biggest demons I’ve ever dealt with out on the endurance trail, that impacts events for years to come.

“To Finish is to Win” is the motto of the AERC for good reason – to get to the finish line with a horse judged fit to continue and a rider who at least survived the trail intact enough to choose to keep riding is a significant feat. The multiple welfare checks for our equine partners means that a finish is by no means a sure thing – a rock that was stepped on the wrong way, a branch that wasn’t seen, and old injury rearing its ugly head. It doesn’t matter that the pair could have slowly hobbled to the finish line, you are OUT by the judgement of the control judges. The decision has been made for you.

In running, much more responsibility rests on the individual. With rare exception (such as some big races that do have medical checks for a runner) the choice of whether to pull yourself or trudge on like a drunk one-legged sailor because of that old hamstring injury is up to you. You truly can decide to “Finish is to Win….at all costs” as a runner and pay a very high price.

The price can be so high that when I’m running I believe that a DNF, even if I could have finished, can be a very reasonable choice. Don’t deplete/injury mental and physical capacities beyond what is repairable, so that I can stay healthy and try again sooner rather than later another day.

Here’s the rub. I’m only recently realizing DNF’ing has a cost too. It’s different from a mandated pull. Whether it exceeds the cost of going on is something some times I don’t fully realize until after the event is finished.

Ultrarunning is partly about suffering. Dealing with that suffering on a mental and physical level over time and miles is part of this sport. For someone who hysterically shrieks like a 2 year old not allowed to play with the sharp kitchen noise when the threat of being stung by a winged insect arises and would probably pass out from the panic if forced into a small inescapable space with them, I’m fascinated by the type of pain and suffering that occurs at endurance events. It’s the same part of me that sorta looked forward to child-birth, and when it was all over smiled at the nurse and said “that wasn’t so bad, running a 50 and riding a 100 was much worse” and even though this is absolutely my last child for non-child birth related reasons, sorta wishes I could try my hand at it again (even as my husband looks at me in horror since apparently in his opinion signing up for voluntary pain is nothing short of crazy).

The events that I have dealt with the suffering and succeeded in spite of them were and remain very empowering (Tevis 2010, San Fransisco 50 mile ultra).

However, the events that I suffered at and elected to tap out rather than gut to the finish unfortunately are even more powerful.

I’ve come to realized that is the ongoing price of my choice to DNF. The fear that when the going gets tough and I need to dig deep in order to keep moving forward, that I won’t be able to.

Technically at Tevis 2013 I was pulled because Farley was lame, but in reality I had DNF’ed myself before that happened. The last couple miles into Fransisco’s (85 miles into the ride)I was literally, no joke, wondering if I could just step off a cliff, or at least just lay down at the side of the trail and rest my head on that pile of boulders over there and just sleep. Never mind never doing endurance again – I was absolutely sure it was going to be a cold day in hell before I even rode for pleasure. I was done with horses. Period.

Now, obviously I wasn’t done. I’ve even done another ride or two since then. However I just can’t seem to get excited about another big ride that will test my limits again and make me dig deep. I’m not excited about doing Tevis again.  I had the best, freshest-feeling horse at that Tevis than at all previous attempts and I blew it. (She was lame because I had rubbed a hole in her back with the saddle because of poor riding – combination of IT bands and fatigue).

The difference between my pull in 2009  (focused me for 2010, no lasting negative effects) and my mental breakdown non-completion in 2013 somehow feels like the difference between “shit happens and sometimes it isn’t your day” and “when it gets tough I take the easy way out”.

This is despite having the example of Tevis 2010 when I gutted it out for a very tough finish. AND having learned a LOT about the mental aspect of endurance events since this, including how chronic low-level pain (IT bands) and mental work over time (leading the entire 85 miles on our own) absolutely contributes to fatigue and the inability to have the will power to go on. And it was TOTALLY understandably why what happened happened.

I don’t know when I’ll get it together enough to ride Tevis again, but I’m going to attempt to slay the other DNF demons this year – the Pioneer Spirit 50.

The 2014 Pioneer Spirit race (link was embedded earlier) is another example of “I know what went wrong and it was TOTALLY understandable why I didn’t finish”. In fact, as it was happening, I knew what was happening and made the decision to not let the race turn into another “Tevis 2013” and suck all the motivation out of ultra training for years to come.

And yet. The cost of a DNF still had to be paid.

I really really REALLY do not want to run Pioneer again because I’m not sure I can can get to the finish line. Even with the issues that kept me from getting there last time fixed.

Why not just avoid it?

Because…. whenever I think of running a 100, there is a nagging doubt in my mind that I can really get to that finish line. Because I quit on that 50.

So, I’m running Pioneer again. And it will be even harder this time because instead of *October it’s in AUGUST. And I’m scared.

*although it was unseasonably warm that year and in the 90’s. But in August it’s like a guarantee.

But it turns out that’s useful too.

Literal panic keeps me going out the door getting my runs in every single day. I don’t have the benefit of several ultras earlier this season to build my confidence and there’s simply not enough time to run the number of miles that I need to make myself feel *confident. So when I’m tempted to skip a work out, I just ask myself what I think is going to keep me going to the 50k point and beyond this time?

*and then probably overtrain and injure myself, so really this is a good thing

Probably not my incredible amount of mileage up to this race. BUT maybe a stronger core will make the difference. Or an extra 50 lunges. Or getting this run in today AND tomorrow instead of only tomorrow.

I also went ahead and put that 100 miler in November back on my schedule.

I’ve always read a lot of race reports – especially 100’s –  but since my DNF’s I notice different things. Yes, the runners and riders that are prepared, experienced, and maybe have a little luck on their side are the ones that reach the finish line, but almost everyone goes through a low point. At both my DNF Demons I was convinced I was done and making the right decision because of the amount of crying and puking that went on. I figure if I’m that far gone, there’s no hope for me. Hopefully on August 20th 2016 through the puke and tears I can remember that almost every 100 mile report I’ve read contains something similar to this (taken from a blog that I’ve now lost the link to :(. He went on to complete the 100):

“It was along this point where I hit the lowest point of my race- the urge to drop was so damn strong here. I just started to cry, mentally just completely lost it, so not having fun anymore, a total meltdown. I wanted to call Allyson and tell her I was okay but not really and could she maybe come pick me up?

A full 24 hours into this race and all I wanted to do was lay down on the side of the trail and just go the fuck to sleep. I prayed that a mountain lion was stalking me and this was his chance to end it for me. That’s how bad it was, hoping I’d be some apex predator’s brunch”.

I could have written the first paragraph in my Pioneer 2014 report (and in fact I think I did. Except I DID call Matt and he DID come pick me up), and the second paragraph could have come straight from my Tevis 2013 report.

I am tougher than I think. I am capable of doing this. 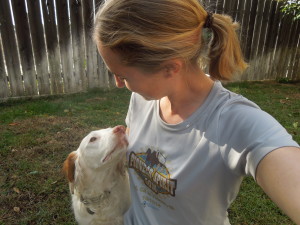 Taken post race in 2014. Will be my facebook profile picture (breaking my tradition that my profile is *always* me and Farley) until I hopefully have a completion in August!!!!

PS – anyone know of a wordpress widget that can automatically pull posts from this date, 1,2 3, etc. years ago and link them? It’s getting time-consuming to do that for 7 years worth of posts!