….So we had to have surgery.

Here’s part 1 of the story.

The Adhere patch was placed on Tuesday, and by Friday it had failed and the hoof flap had further destabilized.

After much angsting and debating and scheming I faced the facts.

Do the 50 this weekend, maybe succeed, take care of the flap surgically and still ride a 100 in September? Or have catastrophic failure and be out for the rest of the season, possibly longer.

In the end, I withdrew my entry from Gold Country and messaged my friend at the vet clinic. I have a couple of seasons left on Farley. I don’t have the luxury of time to recover from costly mistakes by taking big risks. The flap was destabilizing more every day despite my best efforts. 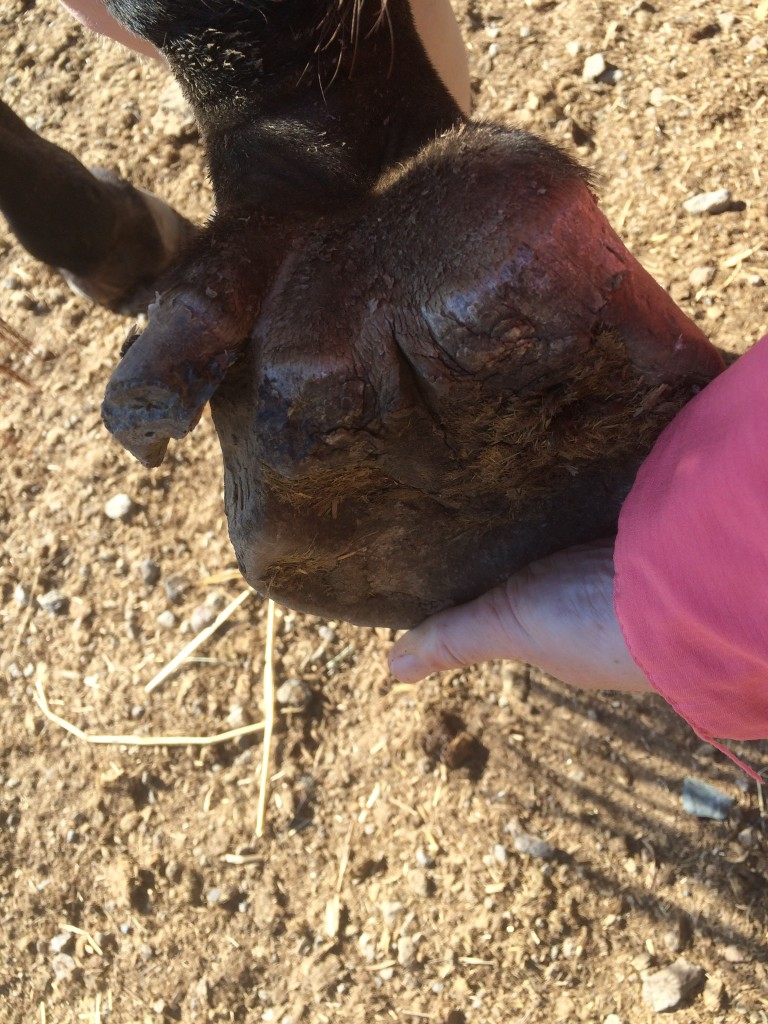 Right before I put the duct tape on Saturday morning. 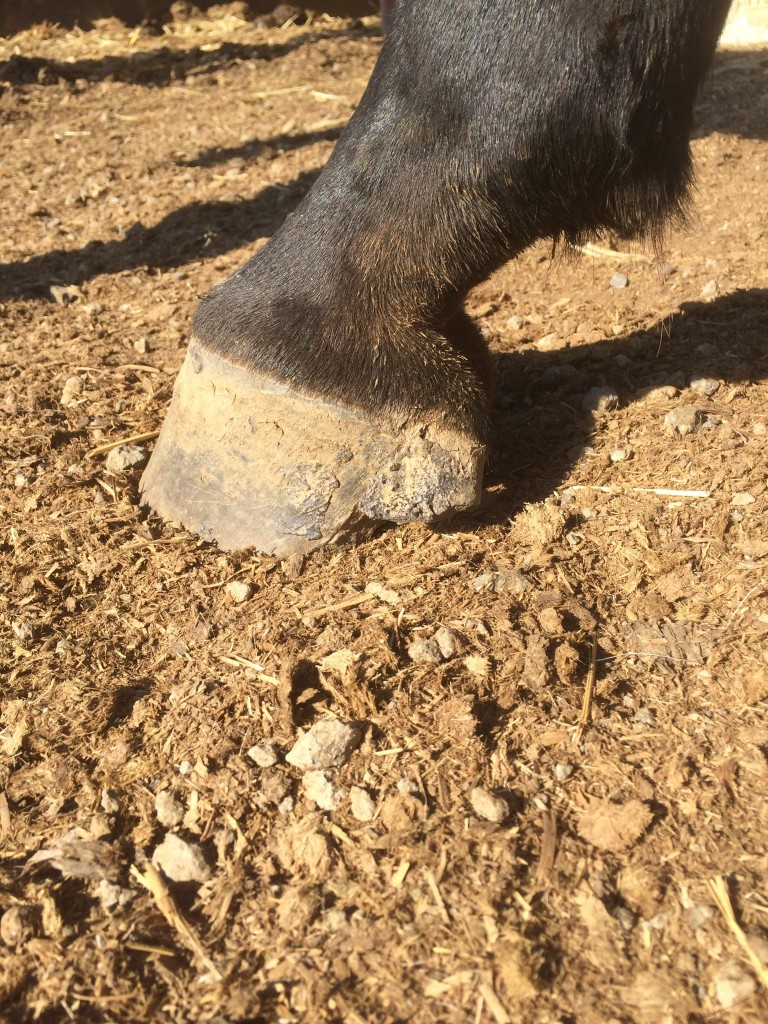 Because it’s taken directly from the side you can’t see the flap displacement because it’s coming towards you. I took this pic to try to show how much of the outside wall is affected. You can also see I was able to trim it up out of weight bearing (better than it looks because she’s on slightly soft footing here). I couldn’t get it any shorter without sedating and blocking because when you nip off the hoof wall, it torqued the fragment enough higher up that it was ouchy.

Due to the surgeon’s schedule and the nature of the flap the surgery had to be done ASAP. I was already on my way to Western states 100 to crew (and pace!) on Saturday when I got the phone call to bring her in, so instead we arranged to drop off Sunday afternoon for an early morning Monday surgery.

On Saturday morning I put a couple wraps of duct tape around the hoof and ironically, it held the flap in place for 36 hours WAY BETTER than anything I had tried to date.

I had a picture of this miraculous occurrence, but the pictures are on my now dead iphone (what an eventful weekend….)

Monday morning they removed the flap above the cornet band under a local block and standing sedation. It’s always fun to hear the large quantity of drugs needed to sedate Farley for procedures. Everyone is fooled by how quiet and compliant she is. She gets drugs, and remains quiet, but isn’t actually sedated. Heheehehe. She’s not naughty in any way, just not…..sedate. 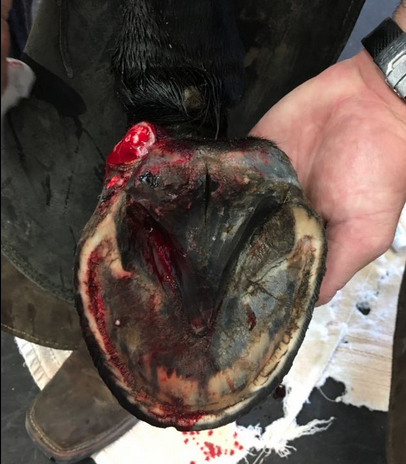 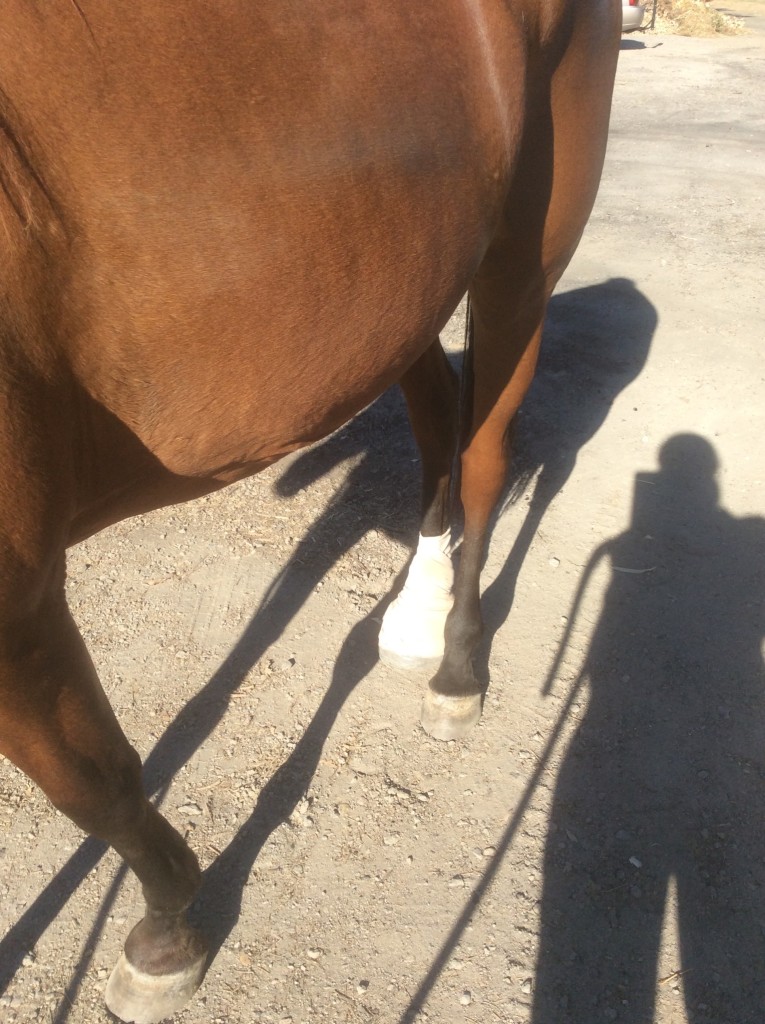 They placed a very nice bell  bandage and told me to replace it on Wednesday (two days later).

I hate doing traditional bell bandages. I’m going to admit it. I’m incompetent. I can do an excellent standing wrap, hock wrap, robert jones…..but the bell bandage is the bane of my wrapping skills.

I gave it a good go.

But when Farley looked at me in disgust because my ill-wrapped bell was making it impossible for her to walk normally I made an executive decision.

A light wrap is fine. 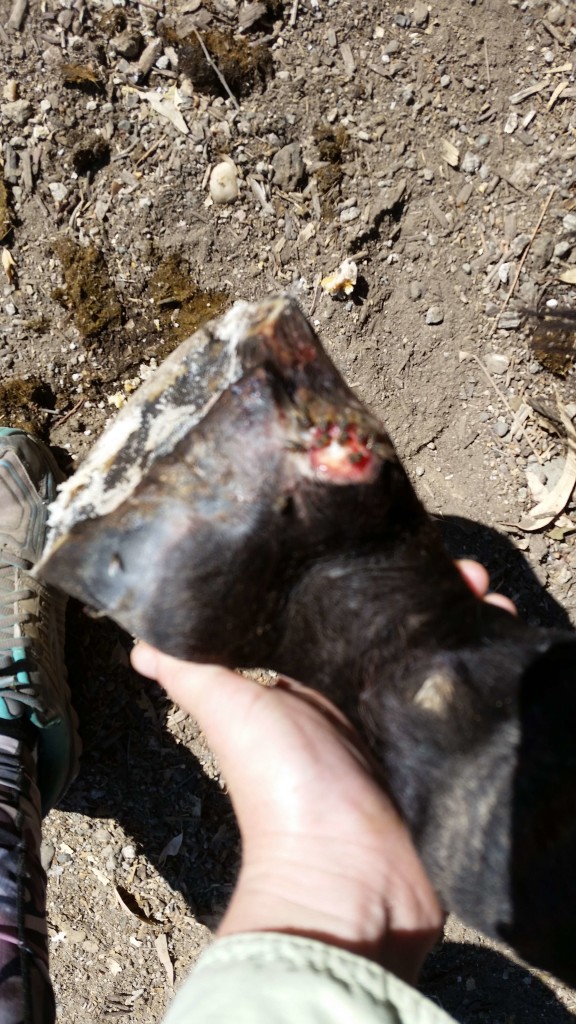 What it looked like at the first bandage change. I’m so pissed it is blurry :(. I’m using a loaner cell phone until I can figure out my cell phone situation and the camera didn’t focus on the right plane and didn’t catch it until I got home. :(. 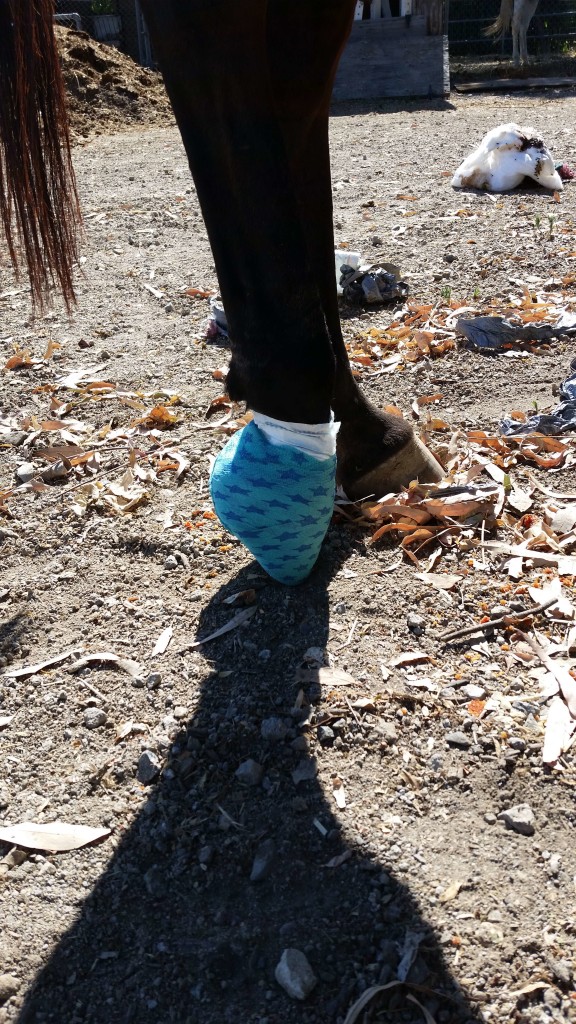 Sugardine poultice with a diaper, covered by vetwrap as the first layer. 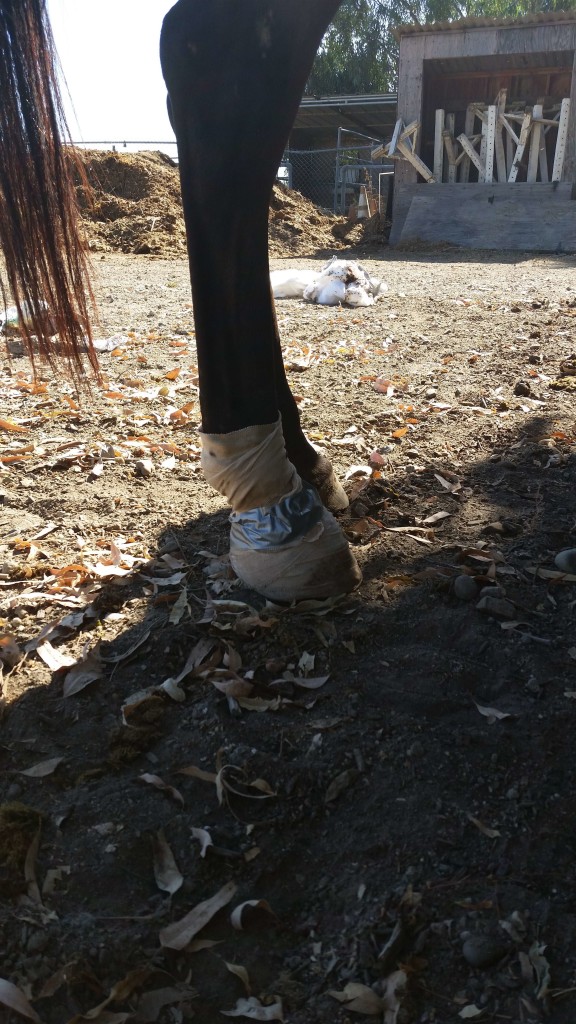 Lots of duct tape over the first layer, covered by elasticon (yes, I tried to reuse it, no I probably shouldn’t have), with some duct tape to try and protect the elasticon edge from unpeeling.

She last had a gram of bute on Tuesday morning. Tuesday afternoon when I picked her up and turned her out in her paddock she trotted off sound (in the bandage). Today (Wednesday) she apparently was DONE with me and my fiddling around, mucking with her rest, and generally being a nuisance and BUCKED and cantered away from me in the paddock.

If I had a time I would look up a GIF of me twitching like a caffeinated cat at that particular move.

There’s potentially another surgery that could be done that would minimize the scar in the hoof wall. To do that now would have been more involved and require longer rehab. After some discussion the vets and I decided it was in Farley’s best interest to do this simpler surgery. Everyone is fairly confident that this repair will be sufficient to get through a couple seasons of endurance, which is likely what she has left. The best way to keep an older horse going is to keep them going. The procedure we did this week allows us to get back to endurance this season (as opposed to next season). If she surprises us and goes longer, or if she needs the surgery in order to stay sound and comfortable in retirement we will do it. 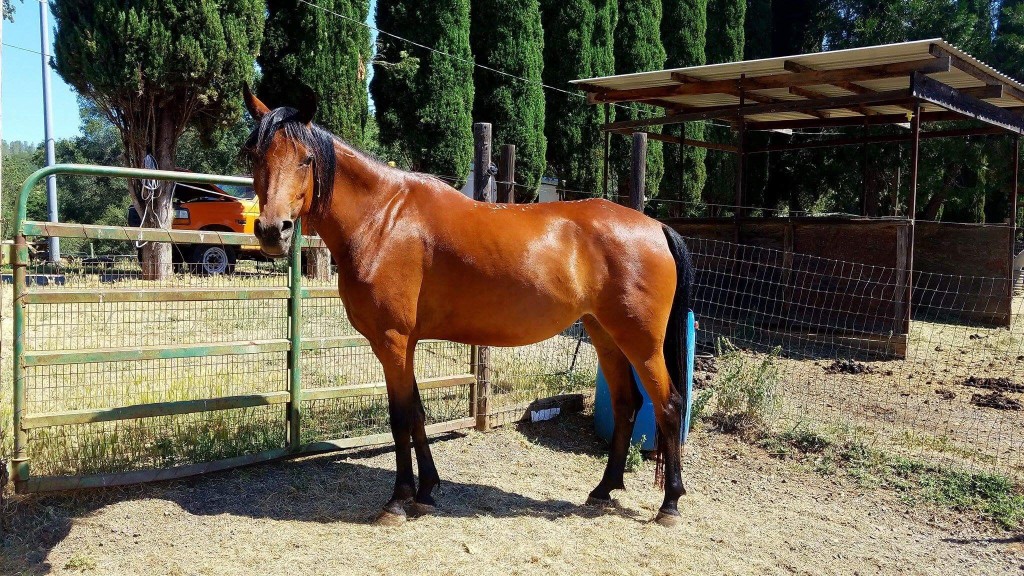 Merrylegs, are you ready to be my main beast for a while? (pic by Aurora, taken sometime over the weekend). I’m picking her up this weekend.

In case you are a New Reader to the blog, I need to reiterate that Farley is a horse that earned her forever home with me some time ago. No matter what the outcome, she has a safe retirement home for as long as she needs one. Regardless of whether we wanted to continue in endurance she needed to have surgery. There’s no guarantees on the outcome of either surgery (even the one that *should* minimize the scar), so we chose the procedure that overall had the best risk/benefit. I’m excited that it means we might still be able to do endurance, but that isn’t the only thing that matters.