Putting Humpty-Dumpty back together

For the last 10 years this is what Farley’s right hind has looked like.

The picture was taken from this post on my trimming method, because as you will see, it no longer looks like this. Specifically, the medial (inside) heel which is on the left of the picture.

See how in the picture you can see a scar extending through the back of the hoof into the heel bulb? But more importantly can you see how the defect in the hoof from the bottom is visible but firmly attached the rest of the hoof?

And this is how it has stayed for 10 years – through shoes, strap on boots, glue on boots, barefoot, regular trims, leaving her too long, wet winter, dry summers…..

And then…AND THEN…..somehow 12 days prior to our *only* scheduled 50 mile ride of the season as a lead up to an incredibly ambitious goal of completing Virginia City 100 mile ride in September she found a rock and unbelievably hit it just right to cause this. 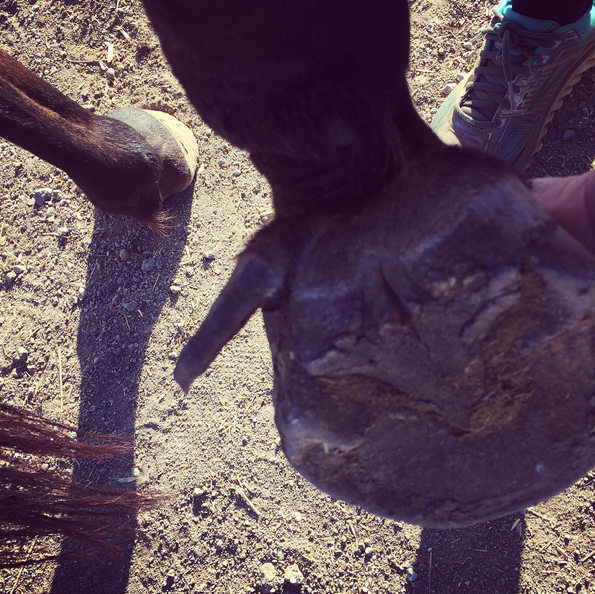 [Insert GIF of me slamming my head against a desk, but not really because that would take too much time and energy to actually find and I have exactly 8 min to write this post before I have to play “dress the child and run out the door to work”] 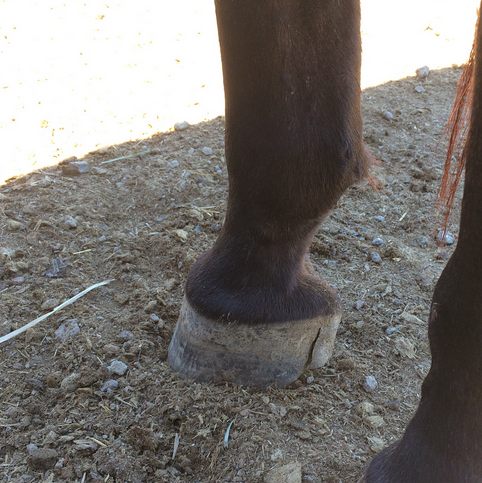 This is after I trimmed it up from the ground.

Yes, her hinds are due for a trim :). I was waiting until the beginning of next week prior to gluing boots on for the ride.

And just in case there was in doubt, why yes the fragment DID move with my finger. 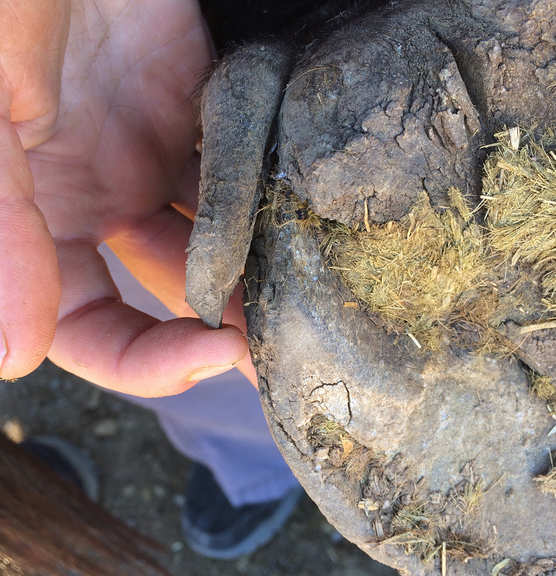 She was still sound on it but obviously uncomfortable with it being torqued about, so I trimmed it as short as I could and then played the ostrich, stuck my head in the sand and rechecked it a couple days later. 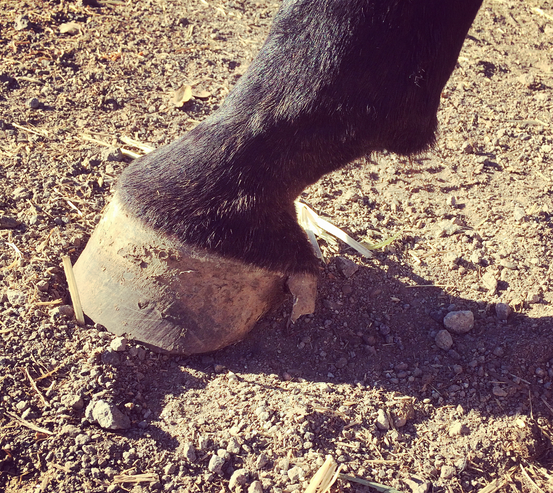 Well, that is unfortunate.

I trimmed it up shorter again (because I could get the nippers around it better), noted that she still didn’t like the fragment moving, and that included trying to reposition the fragment back along side of the hoof.

So my conservative wait and see approach was clearly not working. Time for a new solution.

The only thing that I could come up with that

A. Didn’t include drugs (we are only about 10 days out from the ride) and,

B. Didn’t carry a risk of making it worse (putting a hind boot on it and risking it coming half way off in the paddock and irritating the fragment further) and,

C. Still allowed me to glue boots on next week and ride 50 miles (she’s still sound!!!! this could happen!)

…was to glue the fragment back into place with a hoof repair product.

It was only a matter of time and luck before she caught that fragment on something and tore it and half her heel bulb off.

Problem. I had a single tube that I planned to use for gluing boots on next week and didn’t have time to order new. If I used the tube this week, it wouldn’t be good for the boots next week and I didn’t know where I could get another tube locally.

Sierra Farrier Supply to the rescue!!!!! Never been there before and they saved my bacon. Friendly helpful staff, I’ll definitely be going out there again for my rasps and other supplies.

The good news is that they had a tiny tube of Adhere for $20 so I didn’t have to waste a big tube!

The bad news is that it was black, I had to apply it at 9pm after working double shifts, it was 105 *F, and I didn’t have gloves.

Endurance is so much fun.

I won’t bore you with the false starts and swearing and just show you the pics of the finished result. 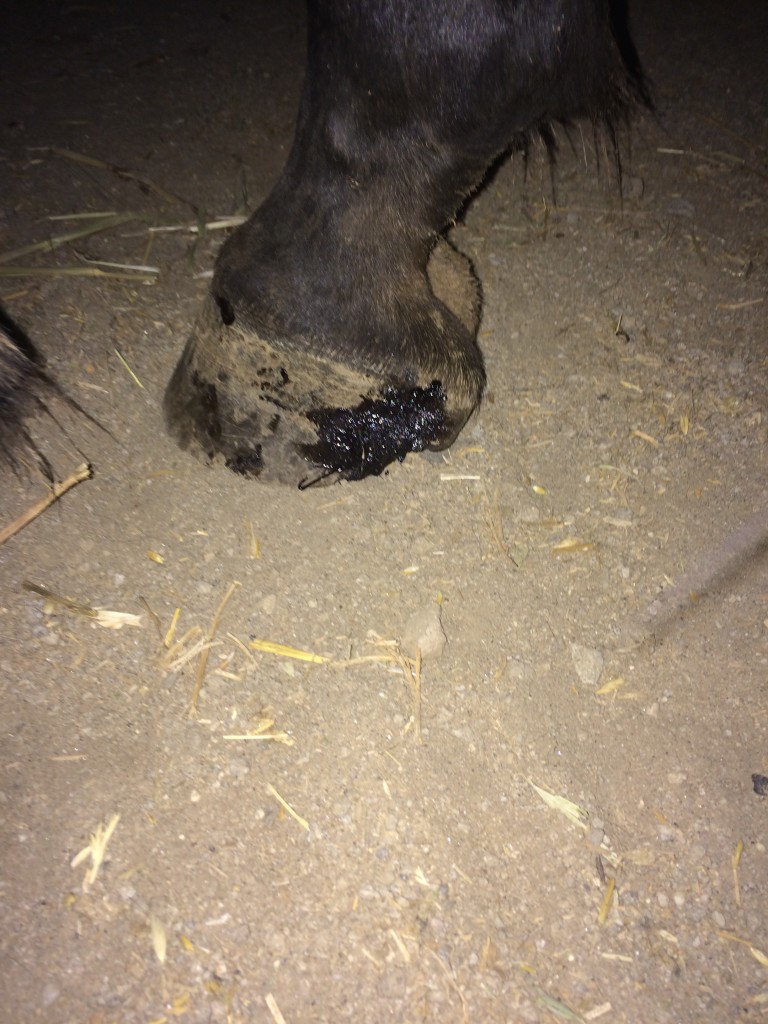 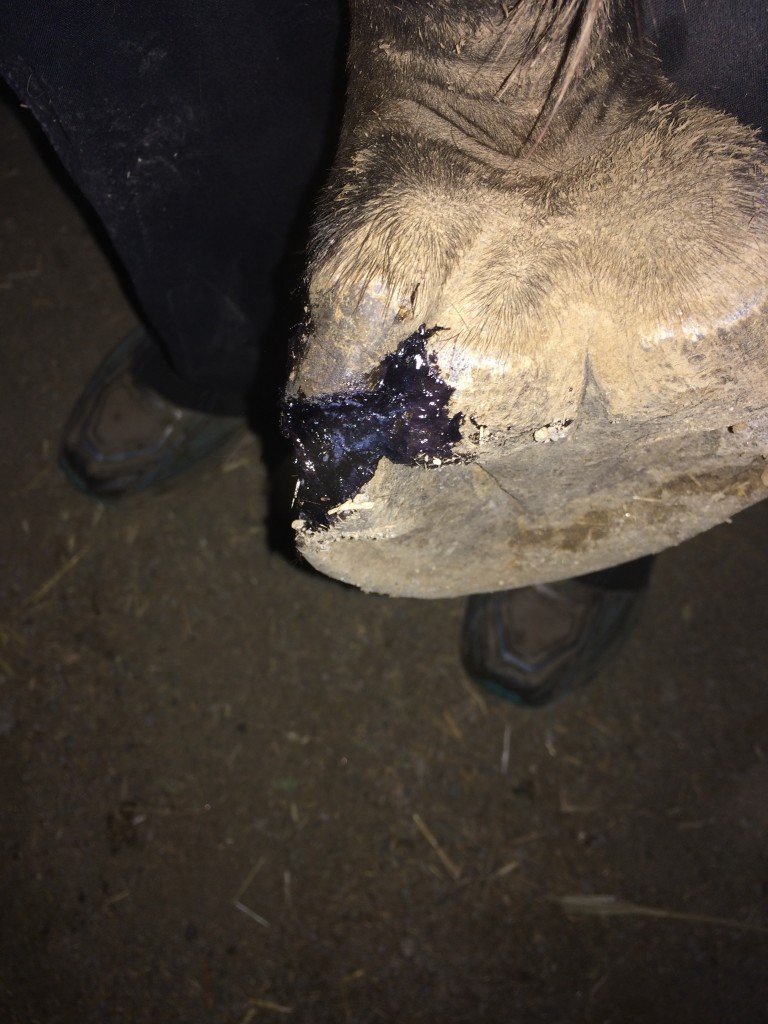 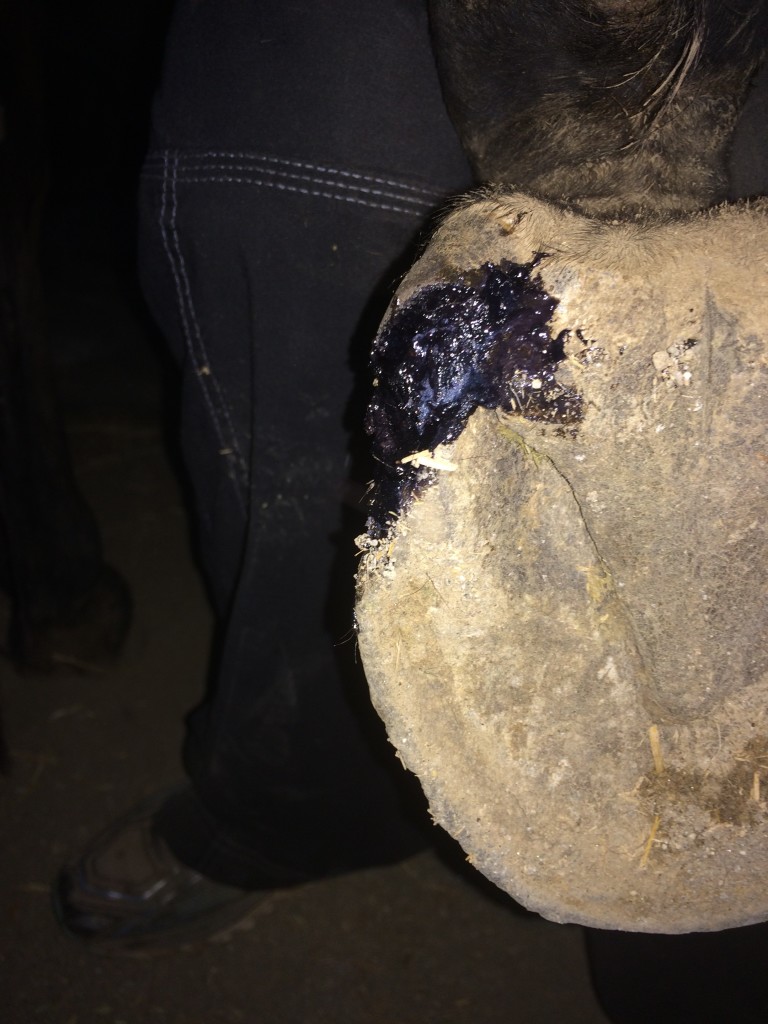 The next morning I went out to see how it held….. 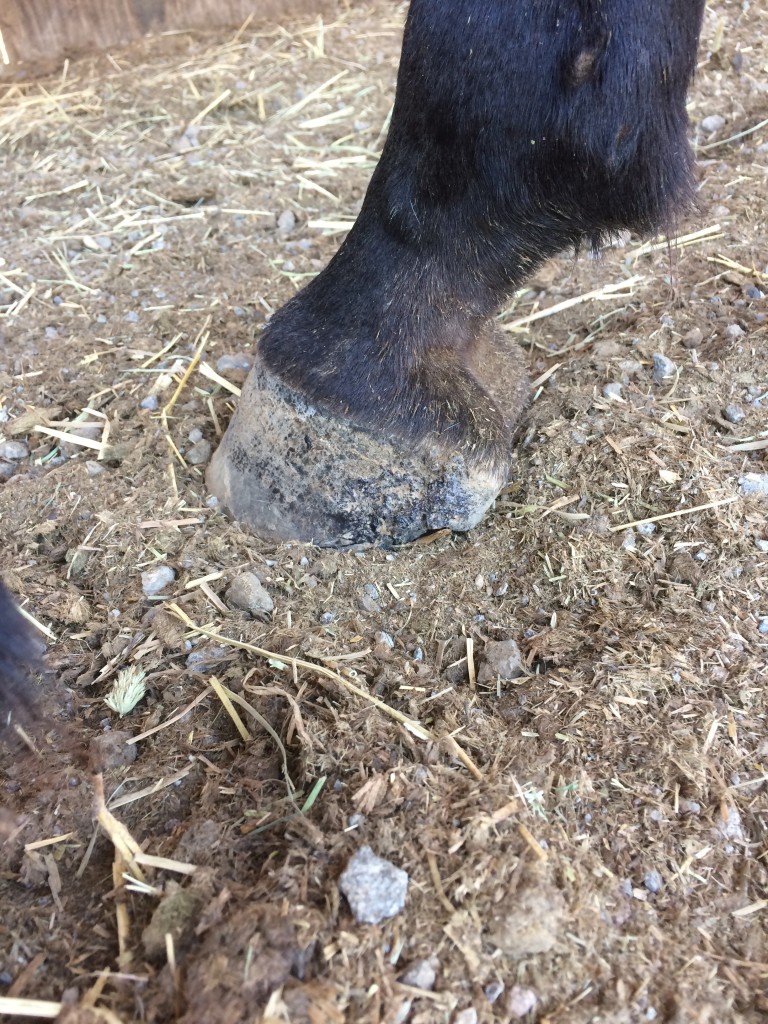 Not bad. You can see how the fragment isn’t weight bearing.

The repair isn’t perfect. I wasn’t able to get the fragment completely back in line with the hoof, but at least it’s no longer mobile. 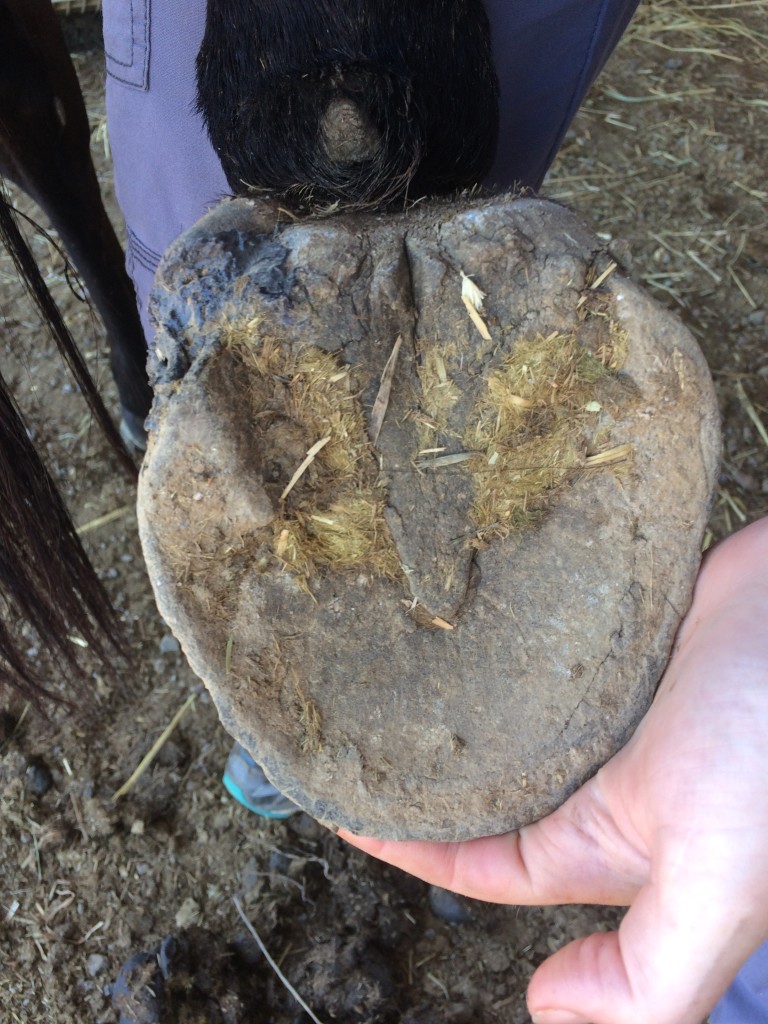 Yes, I still need to trim. On the list for today or tomorrow! 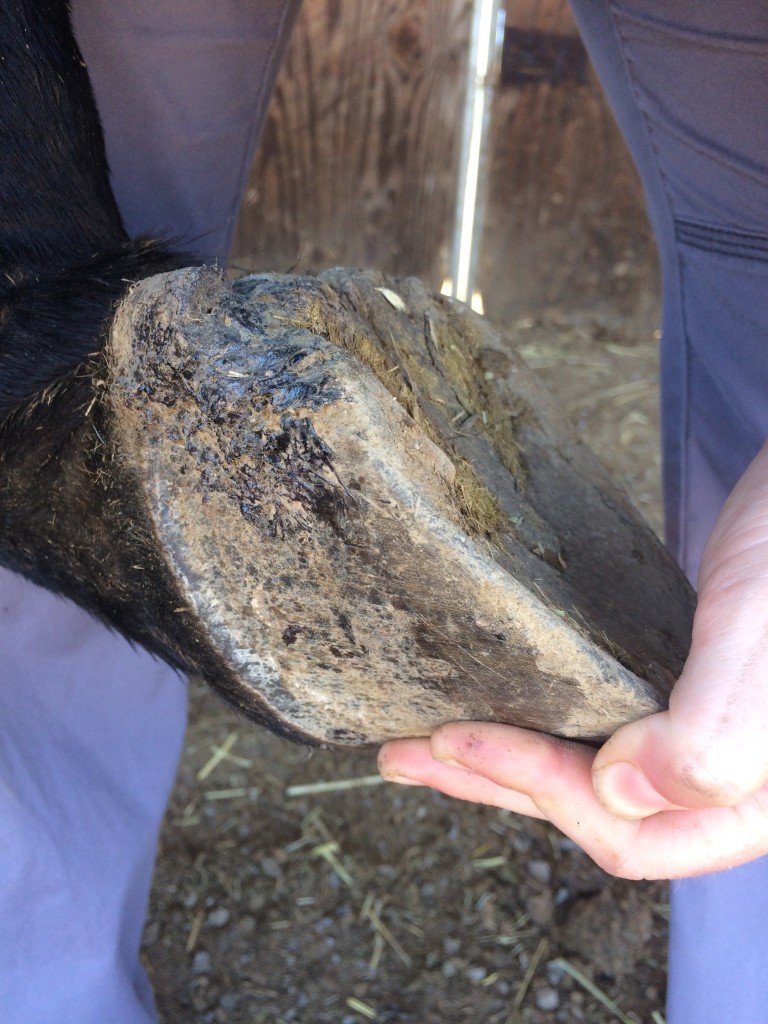 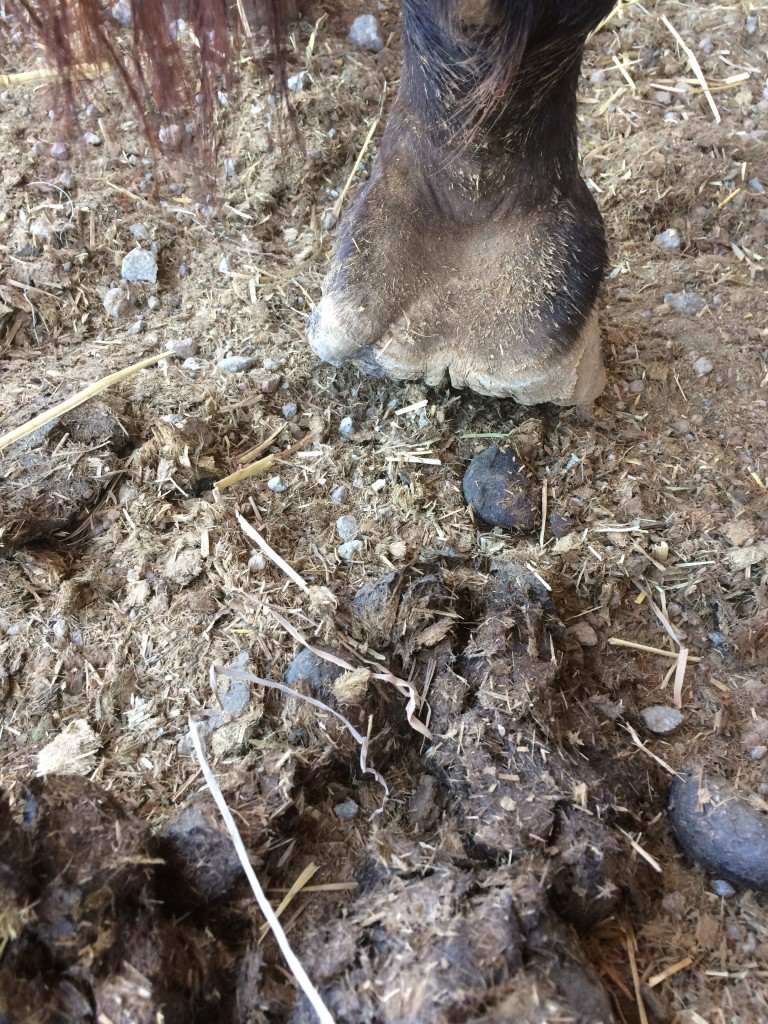 Long term I hope that this will allow the hoof to grow out like it used to. Short term, I’m hoping it keeps her sound and we can complete that 50 miler next weekend!

Farley is looking pretty good these days. Hopefully good enough to do 50 miler in two weeks! She doesn’t look 9 any more, but she doesn’t exactly look 18 either! #NoFilter #FarleyEars #tkrtriforta

6 Responses to Putting Humpty-Dumpty back together