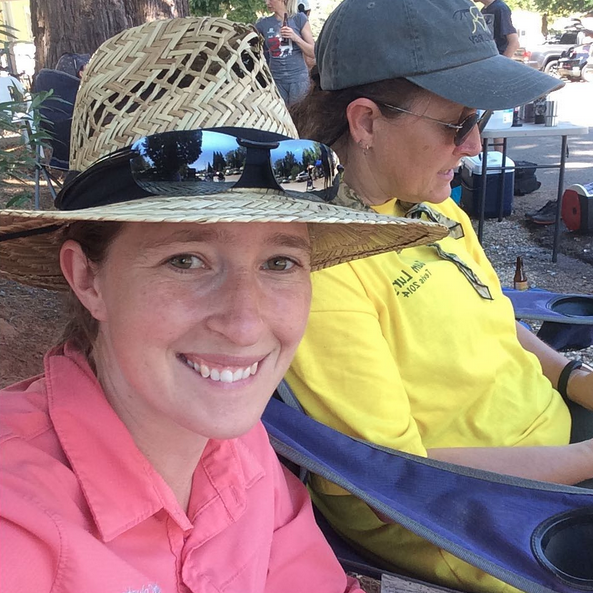 Two years ago I was hugely pregnant dreaming on my first 100 miler, watching the runners go through Foresthill with Lucy while trying not to feel like a has-been runner. That year Lucy and I met someone named E* who was crewing for her friend J* and we jumped at the chance to help out.

He finished, they flew back to the east coast, and occasionally I saw them pop up on facebook.

I honestly thought that was the end. The story of that time me and Lucy got to crew an *actual* runner from the east coast at western states…SQUEEEEEEEEE.

But of course it wasn’t because I’m writing a post about it. Two years later, the same players come back with slightly different roles. 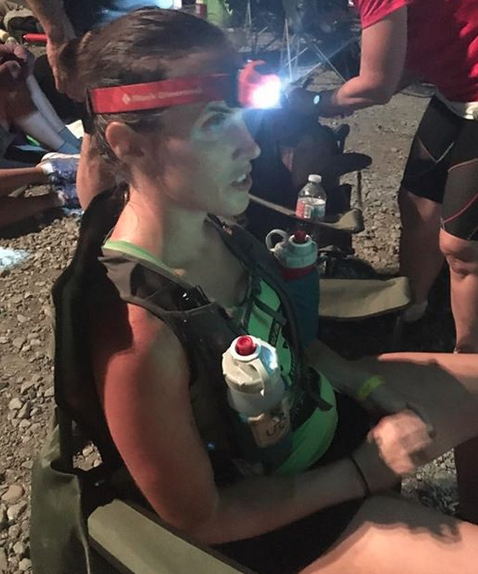 Photo by Lucy. Emily at the river crossing getting it DONE. 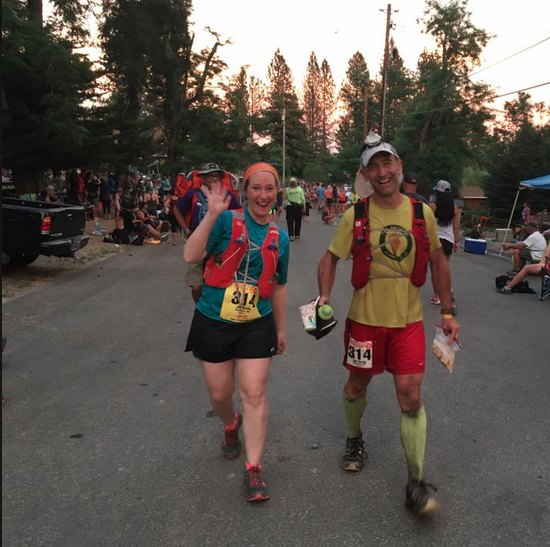 Whew. Settle down. Take a breath. There you go squirrel-brain Mel, use your words and less capital letters……

J* (and E*) each have a history of “git ‘er done” at ultras and while there was some discussion of me perhaps pacing someone, it was generally agreed that I wouldn’t be needed. J* was planning on running essentially unsupported and E* had a crew. Lucy and I were the “redundancy”  – the acknowledgement that not everything goes to plan. We were local, knew the trail, were going to be at the race regardless of whether we were needed.

My brain really didn’t want to devote any energy towards prepping for something unlikely to happen.

Mel: OMG a headlamp. For the love of God don’t forget a headlamp!!!!!!

Brain: How about batteries? Never mind, I really can’t be bothered.

I assured the husband I would be back in time to watch Fig during his Sunday morning flight lesson (5am) since my pacing duties weren’t needed and took off for Robinson Flat.

The first clue that things were not going to plan was most runners were 45-60 min behind predicted times. First the runners were greeted by snow (no trekking poles or spikes allowed at WS100), then mud, and about the time the footing was OK it was the sun’s turn to “shine”. 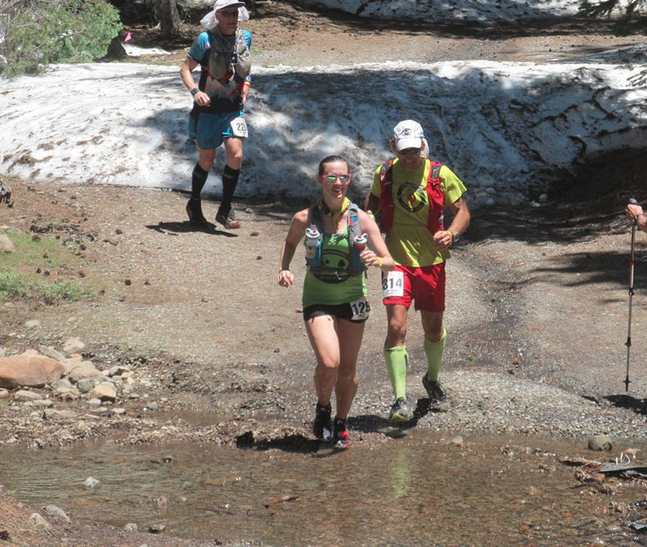 Despite all that, J* and E* looked GREAT coming into RF. (Seriously, if you didn’t click the snow link above, go watch it now so you have an idea what these two went through). 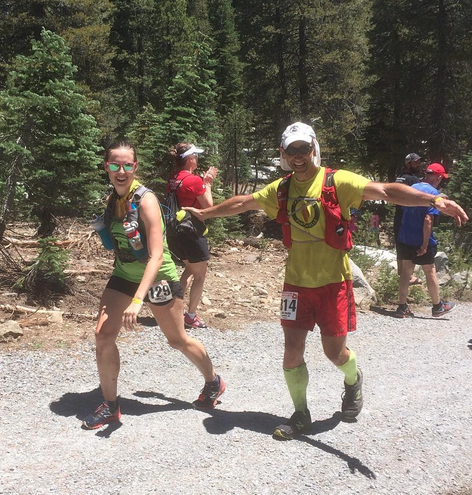 E* powered through the aid station looking strong and obviously was “getting this thing done”, and after a couple minutes of resting and eating we shoved J* out to join her.

After much fiddling with pace charts Lucy and I determined (OK, mostly Lucy) that if we high tailed it back to Foresthill (62 miles) we could see the front runners come through and still make it to Michigan Bluff (55.7 miles) to catch J* and E* again. 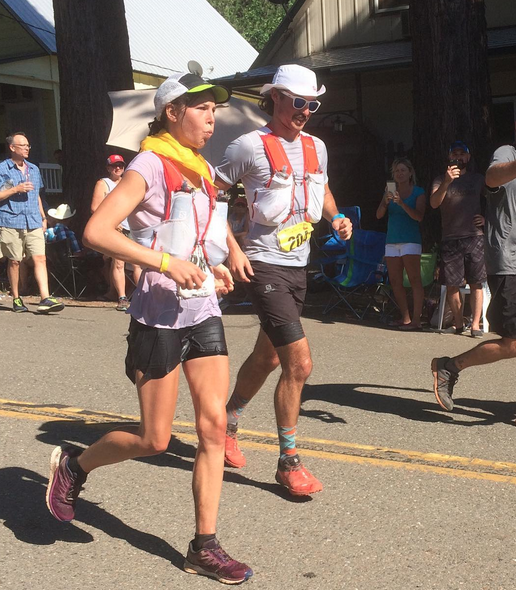 We kept an eye on the splits of our runners and determined that even though J* was slower before Robinson compared to his 2015 time, he was now consistently hitting the same splits for the trail sections. Woot! Despite the early slow down, he had a comfortable cushion to finish as long as he kept moving. 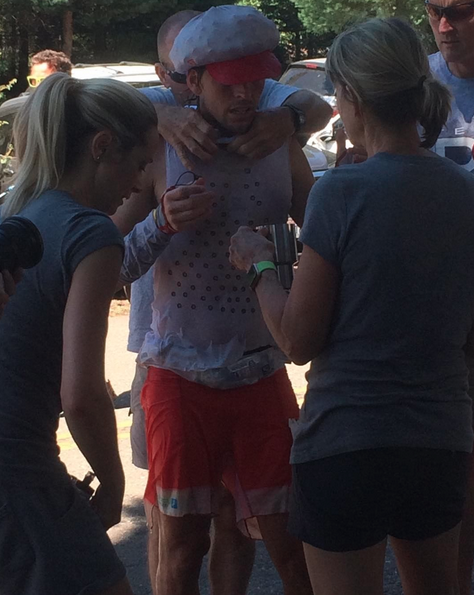 Ryan, eventual winner of men’s race being crewed at FH.

Before leaving to meet J* at Michigan Bluff (55.7 miles) Lucy and I made the executive decision to sign me up as J*’s pacer.

WS is a little different from other ultras I’ve been to. It’s official and there was only one place to sign up as a pacer, even if you were meeting your runner at a different aid station, and you had to sign up before a certain time. I didn’t know if J* needed/wanted a pacer but if he did, me and Lucy were going to be prepared.

Most of the time you can’t pick up a pacer until FH (62 miles). However, if a runner leaves Michigan bluff (55.7 miles) after 8pm, they have the option of having a pacer at that point. J* was going to be very close to this time frame. I changed into running clothes, packed my vest with water bottles and trail food, forced my squirrel brain to take this seriously.

Me: Slow down and focus…

He probably wasn’t going to be mad that I signed up –  but just in case we tucked the yellow bib away where he wouldn’t see it, along with my vest.

As J* came into the aid station, right when we predicted, I jogged besides him and tried calmly say: “I can pace you if you want company to Foresthill. I can do that. Just think about it”.

I really didn’t want to pressure him. I would LOVE to pace. Pretty please let me pace…..but it’s about what works for HIM. If he didn’t want a random stranger pacing him and wanted to be in a different zone….I didn’t want him to feel at all obligated to take me along. But I also didn’t want him to think he was causing any inconvenience or making me do something I didn’t want to.. In the end I was striving for a very neutral – “I’m here for you, but there’s zero pressure to make a decision either way”.

Turns out it was a very good thing Lucy and I made the executive decision.

After sitting in a chair, puking, and having a worried looking medic/volunteer hovering around, everyone looked very relieved when I pulled out my *VERY OFFICIAL* yellow pacer bib with HIS name and number on it.

Turns out J* would love some company to FH.

Who cares if it was only a small 6.3 mile section?

There were many reasons that pacing wasn’t a good idea, most of them I kept to myself.

There was only one thing I had in my favor

Does it count that I’ve been paced (by some really good pacers) and have spent a lot of time thinking about how to do it “right”? Also I’ve listened to podcasts about pacing……

So here I am pacing someone I don’t know, who has WAY more ultra and 100 mile experience than me…what the heck can I do?

Here was my list of goals and rules as a pacer:

As we approached Foresthill I must have not done a terrible job because when I offered to take him to the river, he accepted.

It was magical. Despite my lack of lube, copious amounts of chafing, crappy lighting, and the amount of huffing and puffing I did in the first 3 miles due to not using my inhaler prior to the run.

I tried my best to give him the support he wanted and needed, and in exchange, For six hours I got a chance to run behind, observe and visit with an experienced 100 mile runner. Here were the lessons I learned that night. 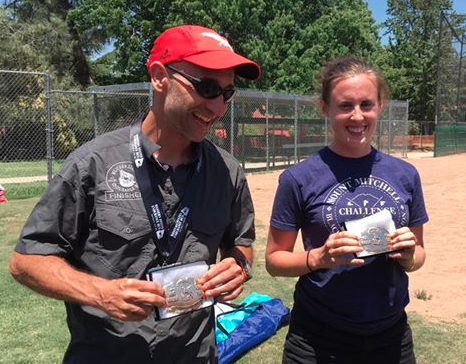 In the end, I hugged J* good bye at the river crossing, got home at 4:55 am (woot!) and got to sleep for an hour on the couch before Fig woke up. I obsessively refreshed his tracking at ultralive.net until him and E* finished a couple hours later. Woot!!!!!!! Good work runners! 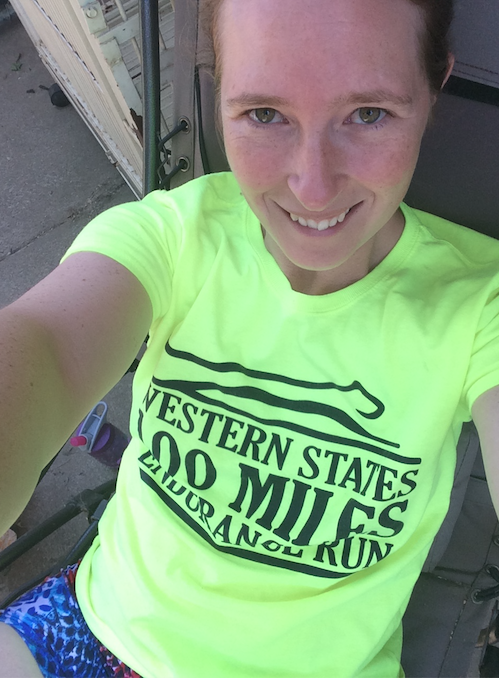 My new favorite shirt courtesy of J*. It says “CREW” on the back 🙂

I still have a sleep debt, accepted a new job yesterday, picked up Farley from the clinic post surgery (details coming!), and trying to prep for Tahoe 50 mile run (I got in!) so please excuse any errors or rambling above :). ‘Tis better to post something now than wait a month and not post it at all :).