I CAN’T get 3 runs a week in for ANYTHING.

Just GOING OUT THE DOOR to make that 3rd run happen whenever? Nope nope nope. No can do.

It’s officially summer here with 100 degree days, early morning light….and an occasional rain shower…WHAT???????? Rain during the summer months isn’t unheard of here, but it’s not typical. Fortunatley an accoasional rain shower doesn’t phase me – I’ve learned at least that much from the winter of 2016-17 that NEVER EVER ENDED.

I baked a ton of good bread this month, checked out new trails (and I’m writing them up as fast as I can – which is actually kind of slow and tedious), rode Farley AND MerryLegs, and did a fair amount of running. Let’s see how the numbers stack up.

NO double digit runs. I flirted with it and ran a 9.3 mile, 7.7 mile etc, but nothing in the double digits and nothing more than 2 hours.

This is not good.

I *should* be running a double digit run weekly, and a 3-4 hour run at least monthly.

Looking at the positives, I checked out a bunch of new running trails this month, did a lot more vert in my runs than normal, and ran really consistently – no missed weeks, at least 2 runs per week every week.

Definitely a ho-hum month for running – but not a disaster. I’ll be OK.

Checked out a new trail head today. Not a lot of mileage for Hoyts crossing but at 300 feet per mile average elevation gain it kicked my ass!

I’m *still* number 14 on the Tahoe 50 mile wait list. Come ON people. I know a bunch of you probably did something stupid and broke an ankle or something getting drunk and climbing over rocks on Memorial Day weekend. Give it up, there’s no hope. You can’t possibly run a 50 mile in mid July.

Farley needs some serious long riding the first half of June, so in the latter half of the month I need to squeeze in the time to do another 20-30 mile run at MINIMUM.

There are still LOTS of trails that need exploring where I live, work, and play. There are some incredible gems here that I’ve never seen, which seems incredible considering how many years I’ve lived here running and riding.

Second new trail of the week! Independence trail. Nice runnable out and back whose most technical aspect is hoping my foot doesn’t go through a board on one of the many boardwalks. Mostly shaded! Barely any poison oak! 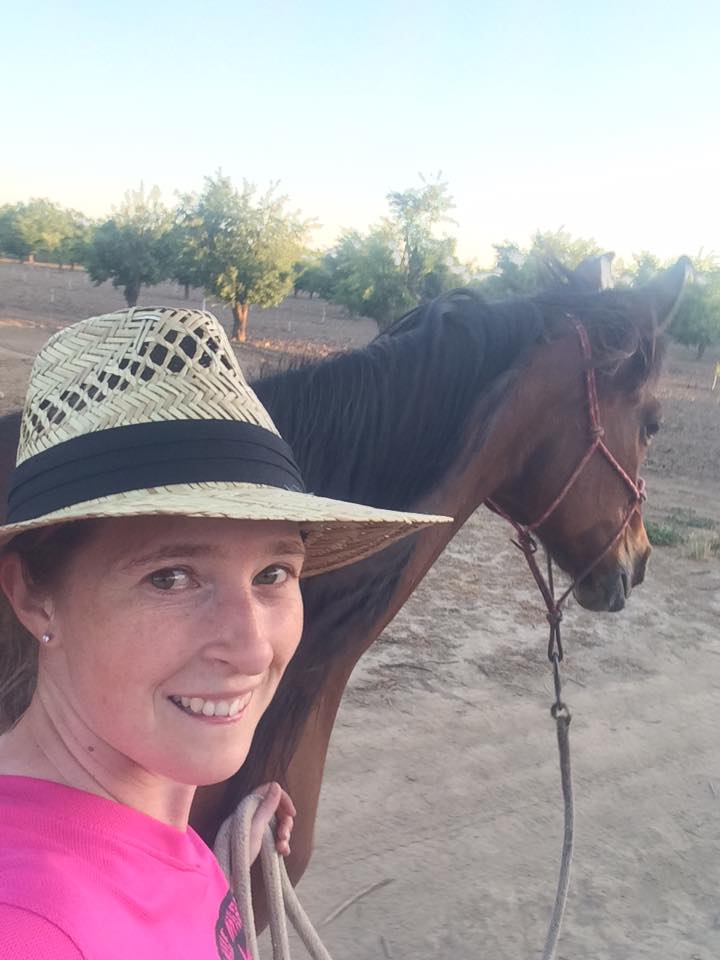 That my Dear Reader, is DAMN good. We aren’t in 100 mile shape yet (3 1/2 months until Virginia City!) but we are getting there.

July 1 we have a 50 mile planned at Gold Country which is a “moderate” difficulty ride. I’ve only been on the course once, during the ride and tie championships in 2014.

Her attitude has improved a LOT. About half of our “home sets” are with polo players legging up their ponies  and the fun of being out with a lot of other horses tearing down the trail has helped the sour “same ‘ole same ‘ole” attitude we’ve struggled with over the last couple years. Overall the pace is the same as our solo rides on the same trails, but the break down of the pace is different. I tend to trot everything with some canter strides occasionally for fun. The polo ponies do a lot more walking on the hard packed dirt and make up the time with cantering in the sandy bits.

She’s sound, happy, and a lot of fun to ride right now. Not too many spicy moments (my new favorite word for an 18 year old horse that is begging to be ridden like a 5 year old) but enough to let me know she still “has it”.

Near the end of the month my friend Aurora brought ML out to the trail head so we could visit and RIDE.

Thank you Aurora for capturing some great shots of us on this ride! (This and the next picture are hers). If you are looking at my reins….she’s wearing a bridle, but I’m still riding off the halter.

Because pulling your 5 year old Arab mare out of pasture and slapping a saddle on to go for her 2nd long trail ride after 4-6 weeks off is the BEST IDEA EVER.

I figure I have what, one more trail ride before she decides she has this whole thing figured out and decides to take the steering wheel and we have to have a come to Jeezus moment?

Unlike last time, I mounted up from the very beginning because my gut said “go for it”, immediately forgot that I was riding the baby horse and started chatting with Aurora complete with arm waving and picture taking. She hasn’t quite figured out how to use her long ‘ole legs to a reasonable walking pace so we did some trot catch up and her mind did not seem quite so blown over how to organize her feet over the rocks to do so.

Besides one tiny moment that means I have to put an asterisks on this statement (I’m getting to it….) she was a ROCKSTAR. Barking dogs, traffic, tiny little water crossings, and bikes, small amounts of trotting, leading, following. Another trail rides with lots of firsts.

6 miles in 2 hours which is still the right amount of time/distance for her brain and body. Her baby brain was tired but not fried. So, off she goes into pasture for another month and we will play again next month. The intention is to train her brain before I get too much physical conditioning on her. I can’t think of anything worse at this point than putting a bunch of conditioning miles on her and making her really fit and not having the ability to use increasing mileage as a brain training tool. 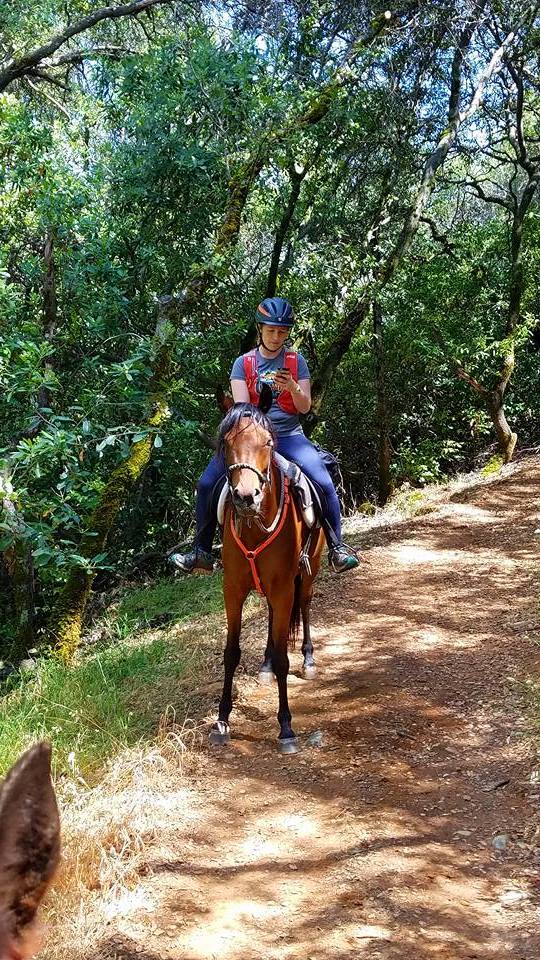 Errr just stand here while I figure something out….(I was actually taking the photo that is posted at the beginning of this section!)

After 2 trail rides on her I’m starting to learn a little bit about Miss MerryLegs.

Actually, all the statements above could be prefaced by “Like Farley”.

I’m immensely amused (and overjoyed) so far, and as my friend pointed out on the trail ride, I rode a certain bloodline for a lot of miles and years, decided I liked it, and bought another one. Is there really any surprise? Nope. I know what I like in my horses and tend to not get distracted from that.

Now I just have to see whether “Like Farley” this one will go 100 miles.

So now I have to tell you about the asterisk. MerryLegs kicked my friends horse when it was behind her. He touched her butt…but he was only so close to her butt because she was pushing her way to the front.

Fortunately it was in close quarters so Aurora’s leg is fine and Scout is fine. It surprised us both because there wasn’t a lot of warning and so although there was some growling and kicking and jerking on the halter that I think got the point across….next time there will be coordination and hell-fire shall rain for the sky for the next second if she ever attempts that again. There had been some ear pinning early on in the ride that had seemed to be resolved with some growling from me, but in the future I’ll carry a crop until it has been made abundantly clear that “talking” to other horses while I’m around her is ABSOLUTELY NOT TOLERATED.

In summary, “baby” horse training is marching right along. I hope it’s clear that while I’m sharing my experience here, I don’t have it all figured out and I’m not offering advice or a definitive “guide” to the “making of an endurance horse”. So much of what I’m doing/getting away with is because of the inherent personality of my horses. I used to take a lot more credit for “making” Farley into a 100 mile horse until I realized a lot of it had to do with her innate characteristics that I have nothing to do with. ML is by far one of the easiest horses I’ve ever started (she’s my sixth) in this sport and fortunately I’m old enough to be wildly grateful and happy….but not take too much credit for it. I’m following my gut (don’t drill too much, don’t get her too fit too fast, don’t do something until it “feels” right, pick my battles, ignore ego) and it’s going well. Thank God.