The grey hairs on her face, body, and legs have multiplied as her winter coat grew in.

But she’s a weird bay.

Who knows. Maybe in 5 years I’ll have this! 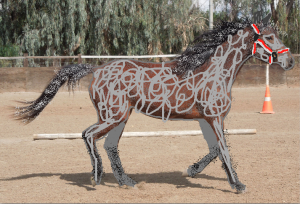 This would not be an improvement. I think grey is a fine color for other people’s horses. I personal would prefer to not own a grey horse.

Then I would have a tall, grey horse who very sneakily squeezed past my major requirements of SHORT, DARK, FEMALE.

Can you imagine me with a 10 year old grey MerryLegs trying to tell people I thought she was a bay? No one would believe me that she was bay at 2 years old. I can visualize it now….Pssst….don’t you know grey horses gradually develop as they mature.  But she was BAY at TWO!  I swear! 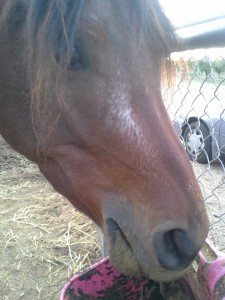 The grey patch on her face has filled in just a tad since I first got her. It used to just be a scattering of hairs. 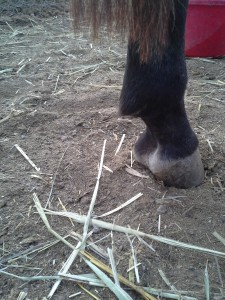 A bit of grey behind the heel of both hinds 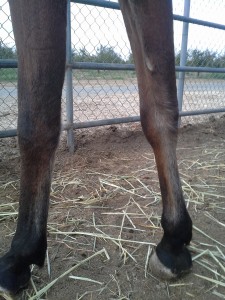 A lot more grey on the back of her front lower legs. 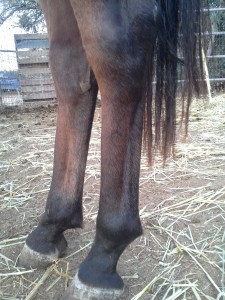 Some grey hairs on her lower hind legs 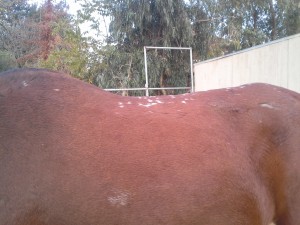 The white patches on her back were definitely there when I got her, but was that little roan patch on her side? I noticed it at the end of summer. 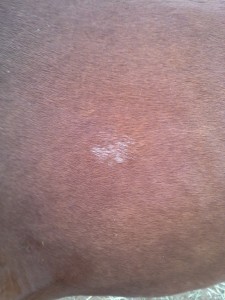 If you missed it on my October link love post, here is a really interesting link on some of the more unusual coat patterns in horses, as well as links to the stories some of the more famous examples (like the chimera brindled QuarterHorse!)

Obviously the white marks on her back are the result of trauma, but I’m curious what is causing the other grey hairs in an otherwise ordinary bay coat. I’m only half-way jesting about her turning grey, could she at this late age still actually be a grey? Seems unlikely.

Arabs do not carry the “roan” gene but can have the white hairs that resemble roaning through other genes. It’s a dominant trait (does not skip generations). With many of the horses on MerryLeg’s dam’s side being greys, it’s possible all of them would have had this “roaning” gene and not be noticed.

I looked at the possibility that she has the Rabicano gene….but it seems to manifest mostly on the flanks, sides, belly etc and in this case it’s most noticeable on her head.

Any other thoughts out there?

19 Responses to A Gray MerryLegs?