At 4:30pm Friday afternoon my dairy medicine externship told me we weren’t going out on Saturday.  I wasn’t arriving at my next (equine) externship until Sunday….which meant I had an *entire* Saturday off!!!!

What to do on an unexpected Saturday off? Let’s review the options.

Nah……Now that I have a working draft I can procrastinate at least a couple of weeks before entering the “panicking” part of the creative process.

. Don’t think this didn’t cross my mind. But, in the end there wasn’t enough benefit to offset the risk of doing a ride.  While she should be perfectly capable of doing a 50 completion right now, I would incredibly bummed in something weird happened and she got injured and was compromised for our big goal this season – the long course ride and tie championships in the beginning of July. 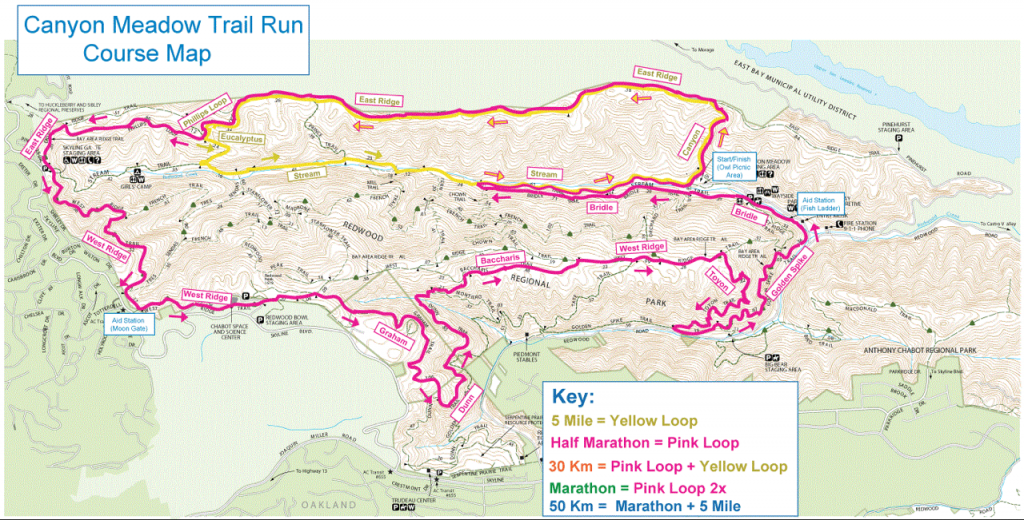 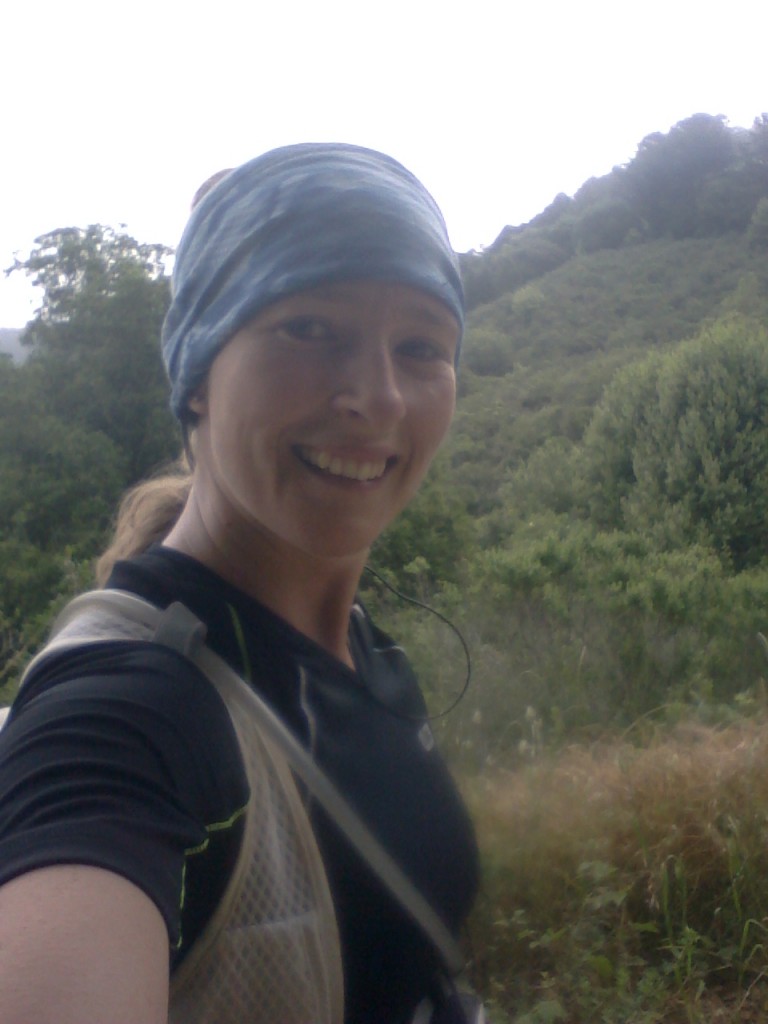 Later on Saturday as I drifted in and out of deliriously happy nap mode, cuddled up in a blanket with an icepack on me knee, Matt looked over at me with genuine bewilderment and asked me why in the world did I randomly decide to do a marathon *that* day?????? 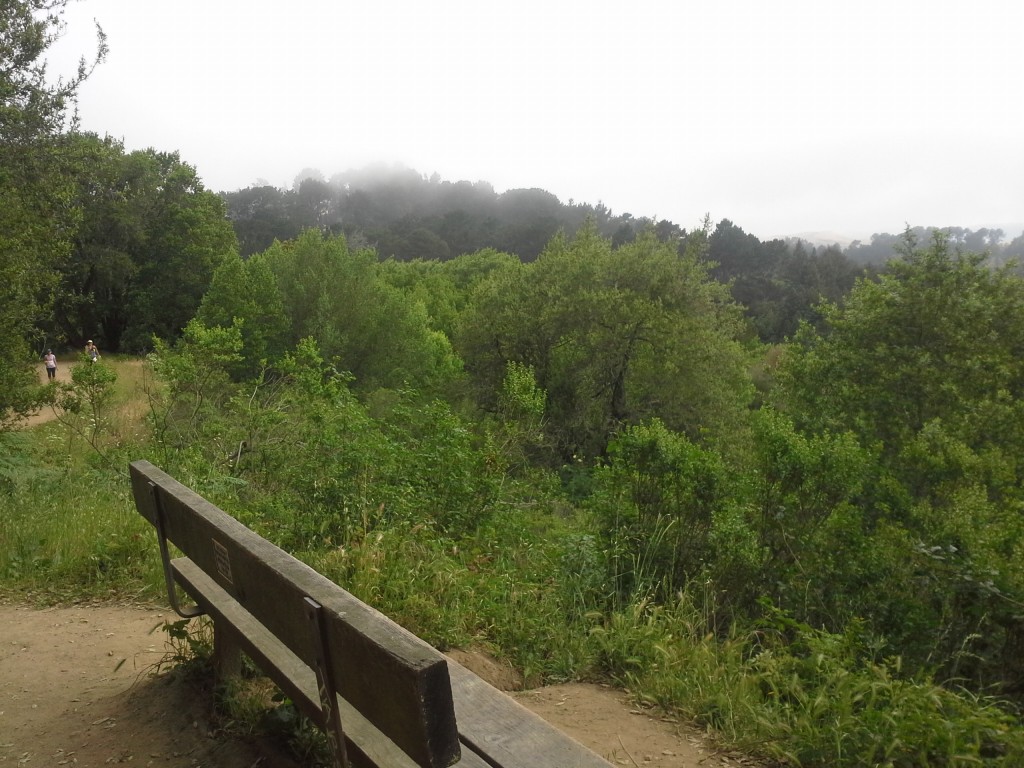 In the beginning of the run, before I had someone to run with I amused myself of taking substandard pictures of the beautiful scenery.

There’s a million reasons that it was an excellent idea, and there wasn’t one that would make sense to a person that needed to ask that question.

The reasons that would make sense to Matt weren’t true on Friday.

So, I composed my answer in terms of future goals…..

“Someday soon I want to run a 50 miler, and by running a marathon today, I could do a 10 mile run on Sunday on my own and get some good mileage this weekend without having to do it all by myself”.

I’m not so sure this was any more convincing.

In the end a day off, combined with Matt going on a biker poker ride that morning (what am I going to do – stay home and do housework? BWHAHAHAAHAHA) and a chance that I could see Funder since the marathon was in her back yard was enough to get me out of bed at 4:30a on Saturday and drive 2 hours to Oakland.

At 8am I was off!  A beautiful overcast day on trails that wound through redwoods, forest, and wildflowers on single and double track on the most perfect footing imaginable. 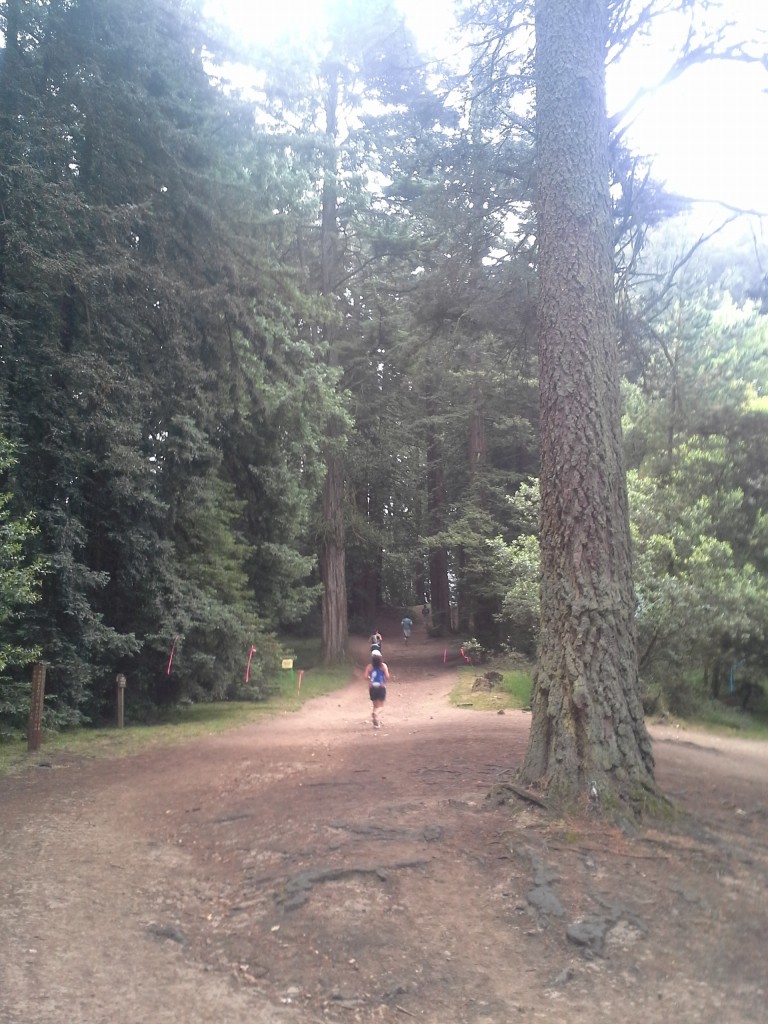 It was a better race than the 50k was back in April – even with a less than adequate taper.  *Ideally* one doesn’t limp over to the registration table with hamstrings still sore from a run 2 days ago and plunk down the cold hard cash for 26.2 miles and 3,068’ ft of elevation change. But, my legs were fresher, I got into a nice rhythm and much of the run was effortless. 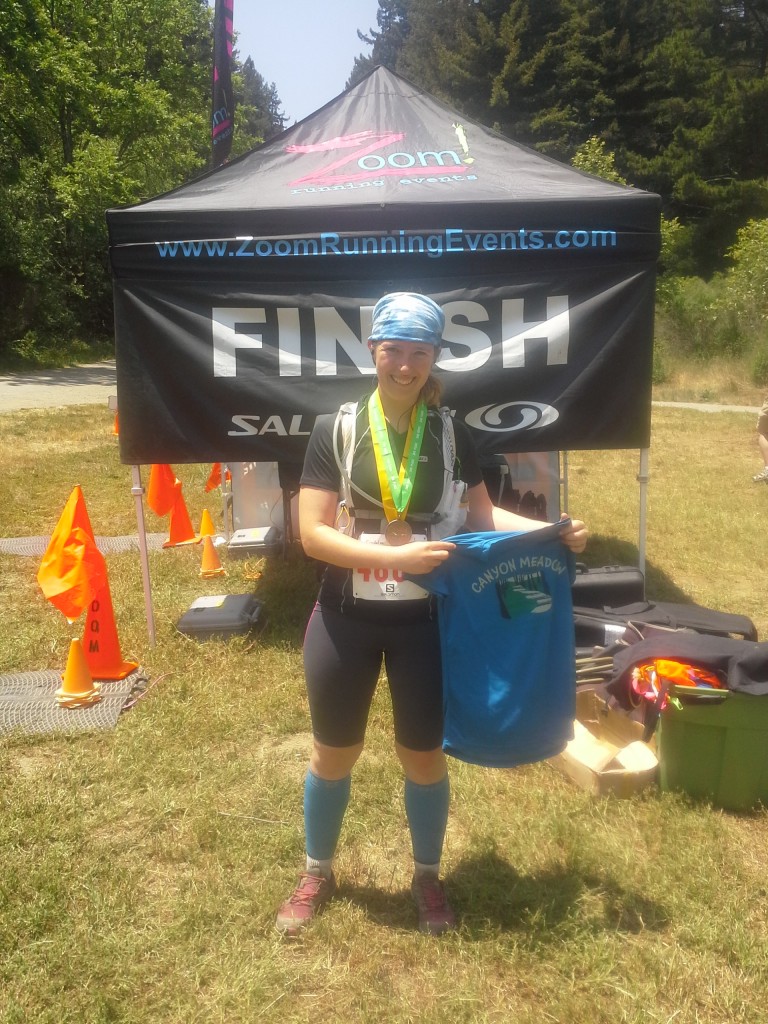 I think the lens on my phone gets sweaty and that’s why at some point during a race my pictures turn out sorta weird and refractile?

The best part of the race was at the end when I discovered they still had a Tshirt available in my size…..when you register the day of the race, there is no tshirt guarantee. The finishers medal (and the 2nd place AG award medal) is nice…..but I really like my t-shirts. Since checking in for spare Tshirts was a “first come first served, come by after your race and check” sort of thing, I thought for sure by the time I finished 26.2 miles all the other women who did the 5 mile, half marathon, and 30k courses would have snatched up all the smalls……But there was one left!!!!!!!!  SCORE!!!!!!! 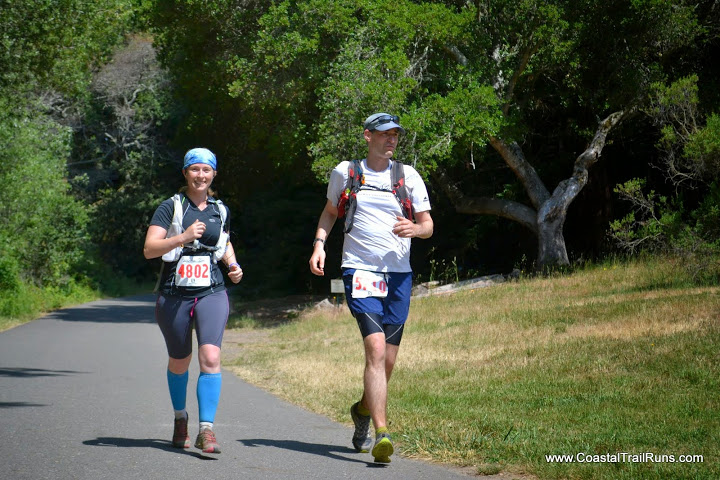 Having company really does help. The race was 2 loops – a 13.1 mile loop that repeated. I wasn’t thrilled with the idea of multiple loops but it bothered me less than I thought – mostly because of excellent company. Originally Funder was going to meet me somewhere on the course and pace me in. I ended up with absolutely no cell phone reception and so….couldn’t touch base with Funder :(. Fortunately half way through the first loop a guy named Craig caught up to me and we paced really well together. Having the company really did make the miles and the hours fly by.  It’s not always possible to pace with someone, but when it works it makes a HUGE difference – much to my surprise after many years of mostly running solo both in training and during races.

To lead or follow? I led 100% of the race, which I thought might make me mentally tired – but for some reason during this race it worked.  I think if I had drafted off of Craig I would have felt stress of “trying to keep up” even though we were generally going the same pace. Being in front I felt like I was setting the pace and didn’t feel any pressure to keep a certain pace. Because the trail wasn’t very technical I wasn’t having to think or make very many decisions…..I was just going and letting the auto decisions (walk uphills, run everything else) flow. In a longer or more technical race I’ll probably want to fall in behind someone for some of the mileage (like I did with Funder during the last part of the 50K) but it was very reassuring that mentally I was able to run “lead dog” for 26.2 miles without a problem.

Pre-fueling before the race can help me stay ahead of the calorie curve. I almost hesitate to bring this up since it flies in the face of everything I do on a daily basis when it comes to my diet and nutrition…..but I’ll go ahead and confess this out loud. Sausage McMuffins work for me as a pre-race breakfast food.

I can’t explain it.  They really shouldn’t work.  Wheat, egg, dairy…..ingredients that I know either give me GI issues or exacerbate rhinitis and allergy problems. But McMuffins are my miracle breakfast for long trail races.  I can eat close to 900 calories pre race, it settles well, digests well, and I don’t get hungry or bonk on the course. I don’t get ravenously hungry post race for weird things. So, for now I’m not questioning it.  It works. It’s what my body wants before an endurance race so that’s what I’ll give it.  That doesn’t mean that I’m not telling myself what a horrible idea it is as I order in the drive through. Or as I chow down on the processed “food”.  But it hasn’t done me wrong……yet.

During race fueling….was pretty much like any other trail race. I ate the same things at the aid stations as we’ve discussed before – potato chips, boiled potatoes, peanut m&ms, fruit, gummies, etc. The biggest difference was what I didn’t eat – my trail goop. Deciding to do a marathon the night before after 2 weeks of not grocery shopping doesn’t lend itself to a plethora of food options. I managed to dig up a protein cliff bar from the cupboard and threw it in my pack….but didn’t eat it until I was on my way home. On a longer race, I’ll need to make sure I have a *real* lunch and include goop in my drop bag, but as long as I hit a aid station every hour or so, I’ll carry an emergency bar, but that’s all. 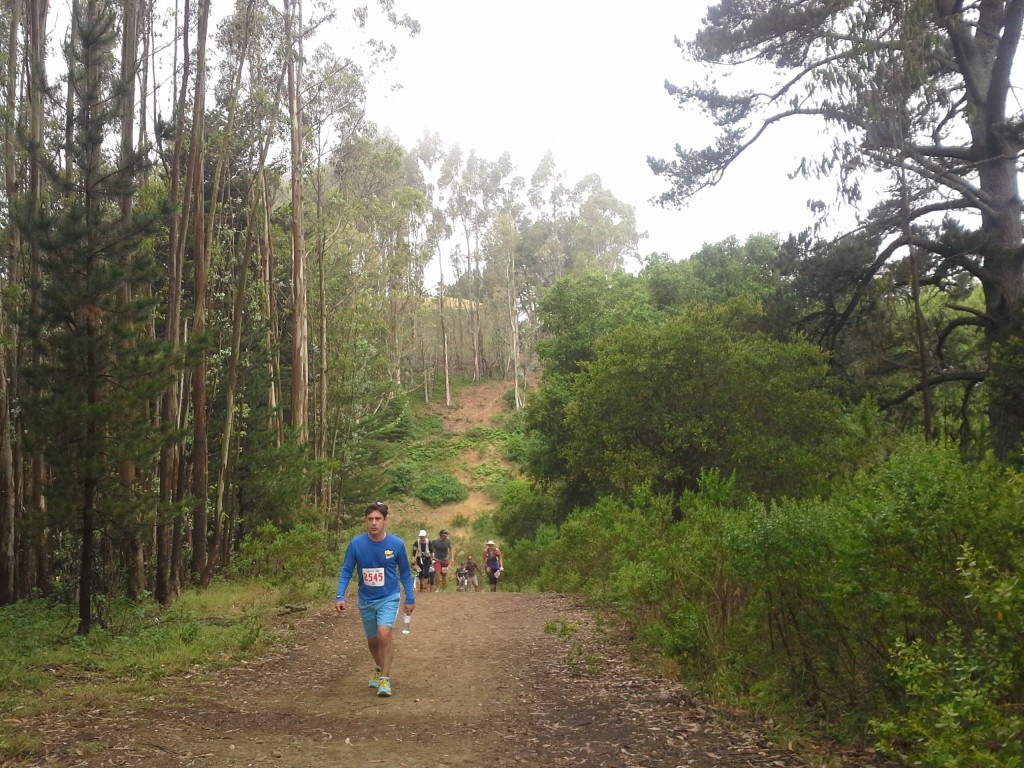 I still have a 5 hour wall. It’s smaller, made of plywood instead of brick….but it’s definitely still there. I get a little whiny, a little crampy, a little pouty……but I can keep running down the trail. Which is far better than I was as of February. It feels like every time I go past the 5 hour mark, that wall is made a little shorter and weaker

Something happened a couple miles from the finish and I’m still not sure what. I *think* it was a combination of hamstrings that were pre fatigued and a lackadaisical attitude about my electrolyte supplementation during the race. It was much cooler on the coast than what I am used to in the central valley and while I was drinking well, I was having trouble remembering to pop electrolytes every 30-60 min.

A couple of miles from the finish, all of a sudden I had really bad pain behind my right knee. At first I thought it was my IT band…..but it was really odd. Instead of having problems running downhill, it was painful to WALK uphill. And it was tighter, more painful and more extensive than the IT band pain I am way too familiar with. I would sorta work out of it, and then it would come back.  It hurt less to run than to walk so I jogged into the finish looking half way decent, collected my booty and then limped to the car.

The first 24 hours I was really afraid I had done something bad and permanent….but nothing I could think of fit the way it hurt and the way it was progressing and improving.

48 hours later from some observations and “gut feelings” and other vague notions that I keep typing and deleting because they sound stupid…. I think it’s a muscle cramp spawned by lack of elyte supplementation during the race and pre-fatigued hamstrings that caused a muscle cramp there instead of the more typical spot I get them – my calves. My calves are a bit more sore than they should be which supports my theory that I didn’t supplement heavily enough.

Needless to say I didn’t get my 10 miles in on Sunday, but that’s OK. I’m listening to my body and that trumps whether I did or did not get a scheduled run done every time.

Are you curious what the running plan is? It has solidified from vague notions of “more ultras” into something more concrete over the last couple days.

Ready for the craziness?

The plan is to get a Saturday 50K in early August, followed by a 14 mile on Sunday and as long as that goes well…..my first RUNNING 50 mile in October.

Shhhhhhhh…don’t tell anyone. It’s a secret. 🙂 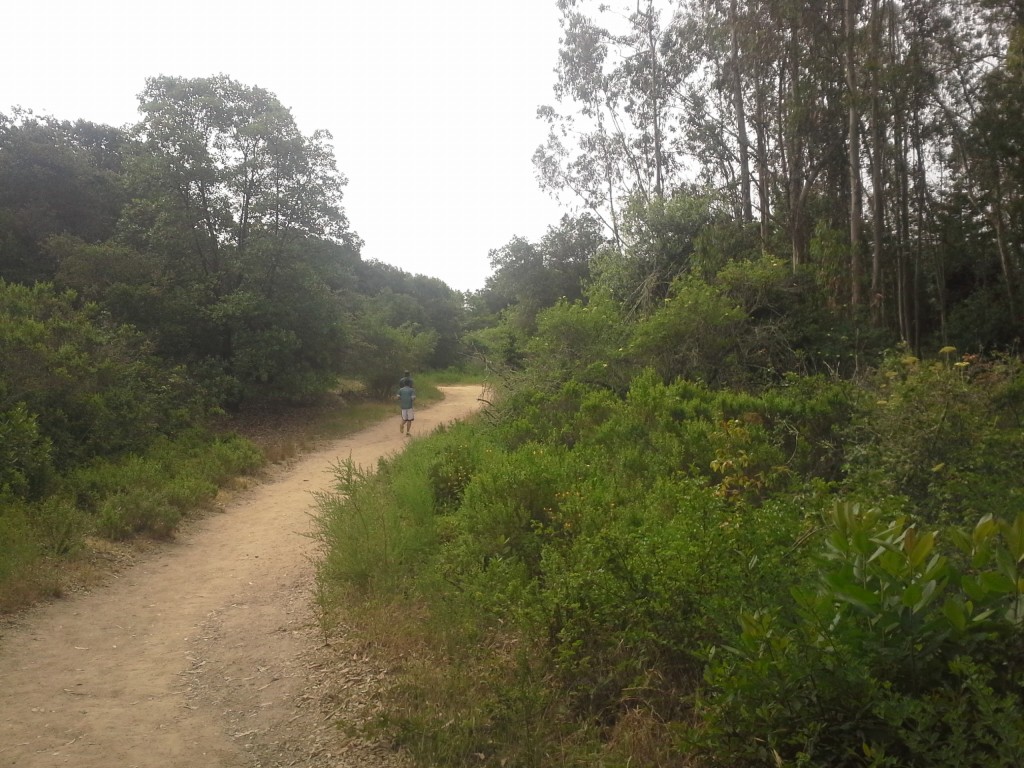 3 Responses to The Canyon Meadows Marathon