For the last eighteen months I have been “meaning” to make a rump rug.

New definition of word “meaning to”. Def. Will not get done, or at least will be procrastinated to the point where the item is no longer needed.

While in my obstinate quest to find the “perfect” model to pattern my rump rug after (see that’s why it was taking so long – research!), Adventure’s on Arabee posted her version of a rump rug. It had a few interesting details that I liked, such as a button and loop system for tying up. This week I got around to making my own!

It was perfect timing. We have had very very very cold weather here this week. It actually SNOWED on Monday. Very rare. The last time it snowed in the Sacramento area was 2002. Before that it was in the 1970’s. 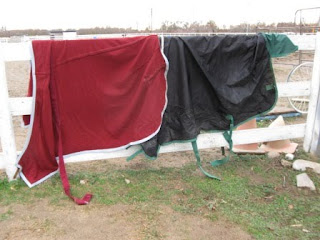 It mostly rained in my area and after flying to the stable from work (even though we were in the middle of a “crisis” my impassioned pleas to check on my poor cold horsey were granted….) I ran to poor Farley’s pen with a cart full of blankets and coolers. She was underneath her shelter for once, but she was still wet and cold….but not shivering yet.

I put a cooler and a rain sheet on her, and left her with a big bucket of hot mash. I was concerned that the rain sheet would trap moisture – that has been my experience at rides, even with a cooler underneath. But, I had no choice. Work was an absolute, non-negotiable priority for the day. 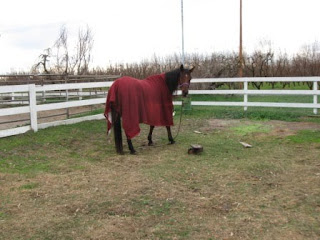 When I returned after work, she was dry! and warm! It worked! On to finishing the rump rug. While Farley grazed nearby (see above – it was still FREEZING so while the blankets aired out on the fence, she was decked out with my irish knit/cooler combo) I did the finishing touches – velcro fasteners.

Pictured below is the (almost) finished rump rug. There are 2 velcro loops attaching it to the back of the saddle. The edging is yellow, but the camera has bleached it out to match button and saddle pad. 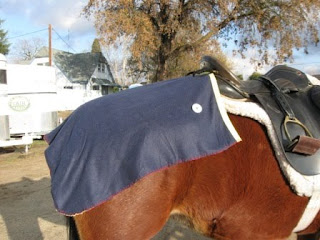 I don’t have a sewing machine right now so everything had to be hand stitched. Every. single. little. stitch.

Below is a close up of the back/rear. See the seam? I wanted 2 different colors, so I ordered 1/2 yard of each color. Unfortunately this means a seam. If I had wanted a solid colored rug, I could have ordered 1 yard of fabric and there would have been no seam – the rug would have a fold at the saddle. I could have gotten around this by ordering 1 full yard of each color, and having extra, but I’m cheap. So I stitched. and stitched. and stitched. 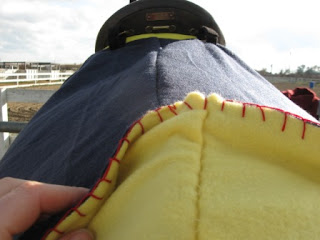 Instead of tying the fleece together, I decided to do a blanket stitch all the way around. 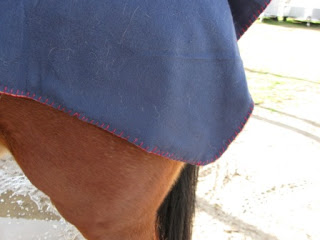 For loops to tie up the rug, I crocheted red yarn and fastened underneath. 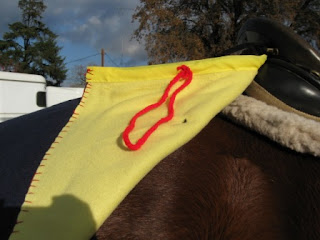 The loops come back up and go to the buttons to tie up the rug. It should be easy to do one-handed. My buttons are set forward of the saddle a few inches because I usually ride with cantle packs during rides and wanted to be able to access the button easily with the packs on. 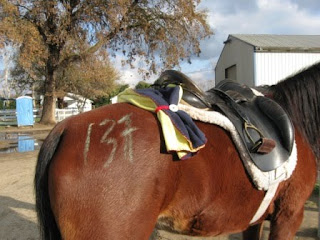 I decided that I wanted two more velcro loops to attach to the side D’s. It will give the blanket more stability. See that little piece of thread in the edging? This is where the velcro will go. 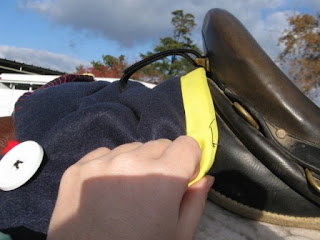 Basic directions for making a rump rug (Adventures on Arabee does it better…):
Buy one yard of fabric. Fold in half. Using some sort of edging material (I used double fold quilting edging), sew on the side you want the saddle to attach to. Sew velcro to edging to attach to saddle. Finish edges of blanket to your liking (knot or sew. If you are going to knot, you might want to purchase more fabric so you have a longer overhang). Sew big buttons on the front of the blanket, where you want it gathered to. Either buy or make loops. Fasten to the back side of the blanket, to the edging. Make sure loops are big enough to go around the blanket and to the buttons. Voila!
Total cost of Project:
Less than $5
Further modifications
I have an idea to attach a top sheet to the rump rug of gortex or other water proof material, using buttons. I just need to find a jacket or tent at the thrift store to sacrifice. I would weight the corners with fishing weights to make it less likely to blow around in inclement weather.
Stay warm everyone!