I’ve been hooked on the Loco management races from the first race I ever did with them in 2018. They  consistently put on incredibly fun, affordable races that are also deceptively challenging. I feel so lucky that most of their races are less than 2 hours from my house. 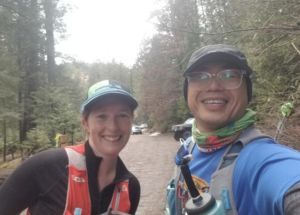 Hey! Guess who I met on the trail. A pic snapped after we realized we had a mutual friend who didn’t come to this race.

The races have smaller numbers of runners than other runs closer to Sacramento and the Bay area, but somehow I always meet the best runners here. 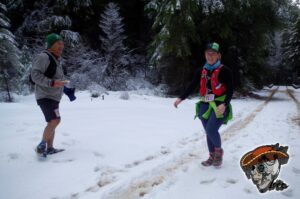 Photo by Dale Nelson. I’m not at all sure what we are doing here but doesn’t it look like we are having fun?

If I have a big race planned, Loco is the place to test my readiness and my training.

For those of you that are new here, these nailed it/failed it posts are the top 3 things I did right and wrong at an event. IMO they are the best way to make sure I repeat what I did right, and start tracking patterns of where I could do better.

I’m going to be smug about this one. I nailed the gear at this race.

Through the snow, mud, hail, warm conditions, and frozen conditions I was FINE. 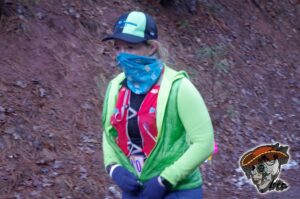 Oh look. There’s me putting a jacket on the minute I’m cold because I HAD ONE WITH ME.

For my last couple races I’ve been carrying a jacket (good Mel!) but I’ve FINALLY learned that a rain jacket isn’t the right choice. I get clammy and wet in it, no matter how breathable it’s supposed to be. 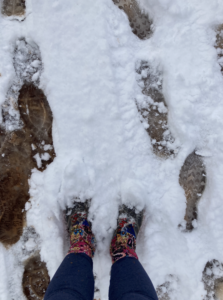 Dashing through the snow….

My food prep paid off. I’ve never been so well-fed and eating has never come easier with less attention than this race. My goal was to repack 50% of estimated calories burned during the event, which comes out to a target of about 250 cal/hour replacement. The napkin math I did after the event said that I was right on target, even without preplanning what I would eat for each loop. 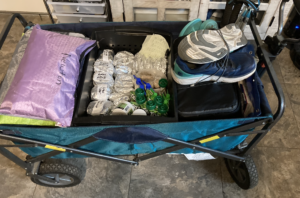 My food was in a plastic bin and because those food packets are all similar calories (except the apple sauce and sticky bites which count as 1/2 a food each), I knew how many I needed to grab for each loop, so I was free to choose what sounded good.

Prepping all my food myself and not relying on packaged food was a lot of work. But it paid off on race day in terms of a happy stomach and mind, and how hydrated I was.

I had no palate fatigue and even continued to eat my left over food in the week after the race. That’s how I know I’m on the right track.

I left enough time to get to the race start the morning of the race that the appearance of snow on the road and having to slow my roll to a crawl didn’t freak me out. I had already scoped out the start line so I knew exactly where I was going, where to park, and where to set up. It is amazing how much stress that eliminated on race morning. Probably worth it to do this in future races if I can.

Now if I can only remember to put gas in my car the night BEFORE the race so I don’t have to do it at midnight on the way home, and also plan my work and life blocks better pre and post race, I’ll really be nailing it.

I waited several hours into the race before I started taking my electrolyte capsules. My calves started to get tight. I hadn’t taken a single cap. It’s hard for my brain to take elyte supplementation seriously when the run doesn’t seem very hard (yet). But, like everything in long events, the decisions that you make in the beginning when it is easy often set you up for how the event is going to go in the later stages. Fortunately I didn’t just chalk up some calf tightness to the muddy and snowy conditions and immediately corrected my mistake and kept to my elyte supplementation program for the rest of the race and had zero further issues.

I did the puking in the middle of the night and passing out on the floor thing again after this race.

Sigh. I honestly didn’t expect to go through a major post race refuel after a 50 miler. 100k or 100 miler? yes. Not a 50. Either because I haven’t done 50 miles in a while, or because of the race conditions, I did the SNARFY HUNGRY thing for the 2 days post race where I need to eat every 2 hours, and if I don’t it rapidly progresses into feeling really unwell.

I had ate something immediately post race, but didn’t eat anything once I got home 2 hours later, and by the time I woke up at 2am my body was angry about the whole situation.

I was having a dream of being a chocolate color bloated GVD Labrador (no, I wasn’t treating this patient, I was this patient) when I woke up completely disoriented and it took me far too long to realize that no, I wasn’t a lab, I was a human whose GI tract had probably been trying to wake me up for an hour.

Crap crap crap…..EAT SOMETHING….as I stumbled/tripped/winced myself to the kitchen to grab half a banana.  Maybe I made it before….?

Nope. Dash back to the bathroom to dry heave, and thanks to whatever physiological mechanism is inherent in my biology, nearly black out on the cold tile floor (have done this when puking since I was a child).

Eat half a banana. Feel instantly better. (Which is the difference between screwing up your electrolytes during a race (a la Loco 2019 100k) and feeling like crap post-race, and just merely needing to feed your body. )

Rinse-later-repeat for 2 days (except for the puking part and the GVD labrador dream. I managed to drag my ass out of bed and eat crackers every 2 hours the rest of the time).

In addition to just being surprised this happened after a 50 miler, I also probably got too complacent about post-race fueling because I did such a good job during the race. I need to remember that during the race fueling and post race fueling are two completely different things, and just because I nailed the former doesn’t mean I can slack off on the latter.

One of the things I settled on as I bounced down the trail post 40 mile bonk was dry socks and dry tights for my last two loops.

And then I decided that if I’m going to have to take off my shoes and gaiters to replace socks and tights, then I may as well get my underwear off that was chafing. I didn’t want to cut them off a la Rocky Raccoon because I like this pair and they are practically brand new. In my life, new underwear trumps any dignity I might still process.

So, I needed to remove shoes, gaiters, (wet) socks, (wet) tights, running shorts, AND then the underwear. All while balancing on a soggy cold shower rug floating on top of poop stew mud with the coordination of a one legged duck.

It was comically slow. I might have pulled a muscle in my side trying to maintain my balance as I swung my bare bottom about. In retrospect sitting down probably would have been a good idea. At the time I remember thinking how wet my chair was and how complicated bringing my chair and bath mat together in the same place in order to coordinate this effort seemed.

I rarely change clothes or shoes in an event and this is probably the best policy. In the future, planning transitions like I do in triathlons instead of winging it when I have no fine motor skillz or critical thinking skillz would probably be an improvement. 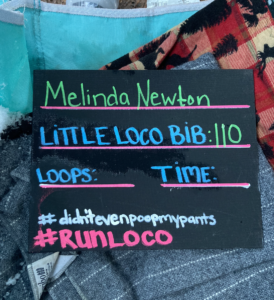 Every team had a highly decorated sign that represented their team name, and the solo runners got these. I love it so much because she accidentally gave me one with a hashtag meant for someone else but apparently these chalk markers aren’t erasable 😂

Most food for training leading up to the race, and the race menu was inspired by the book Feed Zone Portables. Most I have modified to fit my needs and tastes from the original recipes. I’ve found the book a good starting point, which is its stated mission. 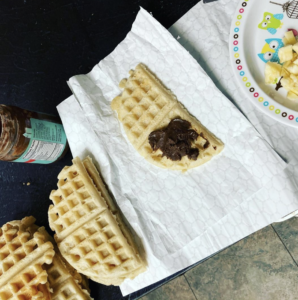 Bananas and hazelnut chocolate spread on waffles. I like to make huge batches of waffles, freeze them, and then pull them out to make sandwiches as needed. 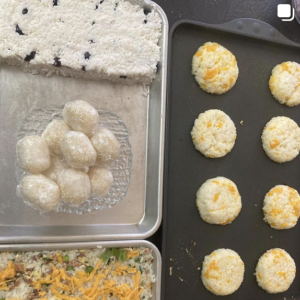 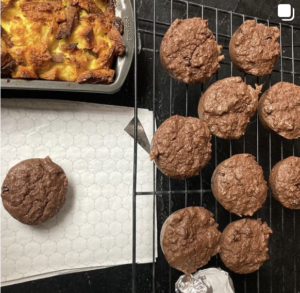 Two different bread cakes. I’ve made four variations of these so far, and all were really good on the trail.

Bad picture of cooking up the sweet masa cakes, which are mixed and sort of cook up like pancakes.

On to the next adventure!